No, You're Not Too Old for a Tattoo | Prime Women Media

If you think tattoos are only for sailors, soldiers, bikers, and millennials, think again — because you are part of the largest age group getting inked: According to a Harris poll, 27 percent of people who have tattoos are 40 to 49 years old; 16 percent are 50-plus. And women are more likely to get a tattoo nowadays than men. Why? Because tattoos today can be a show of being a badass or an expression of beauty.

There are no rules when it comes to design. Self-expression is the point of a tattoo. Some women know exactly what we want and think about it forever in the context of “if I ever get a tattoo.” Others get a tattoo on a whim. Worried you will regret it? It’s unlikely. The same Harris poll found that among those with a tattoo, 86 percent have never regretted getting one, and 30 percent said it makes them feel sexier. Other feelings attributed to having a tattoo included feeling rebellious (25 percent), attractive or strong (21 percent), spiritual (16 percent), healthier (9 percent), more intelligent (8 percent), and athletic (5 percent).

My first body art was a mix of thinking ahead and spur of the moment. I’d thought about having a little daisy on my derriere, where only my husband and I could see it, for quite some time. Then, walking back to my office past a tattoo parlor in Manhattan on a rush of adrenalin after being on live TV for the first time, I decided to celebrate not sounding like an idiot in front of millions of viewers by getting inked. Then a few years ago, on the cusp of 50, when my daisy was fading, my “if I ever get another tattoo…” musings were more meaningful, and I got a tattoo of a blue puzzle piece to honor my autistic son and being part of that tribe, adding the logo of the nonprofit I’d just opened for special needs young adults.

What Kind Of Tattoo?

If you decide to get a tattoo and don’t have a definite idea of what you want, tattoo artists have samples of their work and books of tattoo art to choose from. Women tend toward themes like flowers, filigree, lace, and lettering — quotes, mantras, phrases, or words of inspiration. Others pay homage to their professions or hobbies. Some women get tattoos of their favorite drawing or doodle by their kids or grandkids.

Where to Place Tattoo?

Where you place your tattoo art is up to you. Some people like to keep them private; others want them on display for the world to see. The Pew Research Center fact tank that reports on issues, attitudes, and trends shaping the world found in 2010 that a majority of people with tattoos (72 percent) keep them hidden. We suspect that number is a good bit lower now, as tattoos have become much more mainstream. 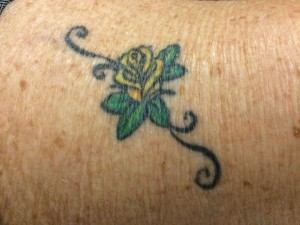 If you really, kinda, sort of want one, but the thought of potential tattoo regret holds you back, don’t be fooled by advertising for semipermanent tattoos that purportedly last six weeks to six months or a year. There are only two ways to go with a tattoo: temporary — sticker art that lasts three to six days or henna tattoos that last up to a few weeks — or permanent. Because a tattoo requires ink to be injected under the skin, there is really no such thing as a semipermanent tattoo.

If you’ve read this far, you’re clearly intrigued by the thought of a forever-design somewhere on your body. Our advice is to think it through before you get a tattoo, and maybe have a temporary try-out wearing a temporary tattoo at the site on your body you’re considering having inked. Stickeryou.com makes custom temporary tattoos with no minimum order, so you can try out your design. Temporarytattoos.com makes custom orders in metallic, glitter, and glow-in-the dark as well a traditional. We also particularly love the whimsical temporary tattoo designs of Inked by Dani, including her white ones for darker skin.

>READ: CONSIDERING GETTING A TATTOO?

How Longevity Medicine Is Changing How We Live