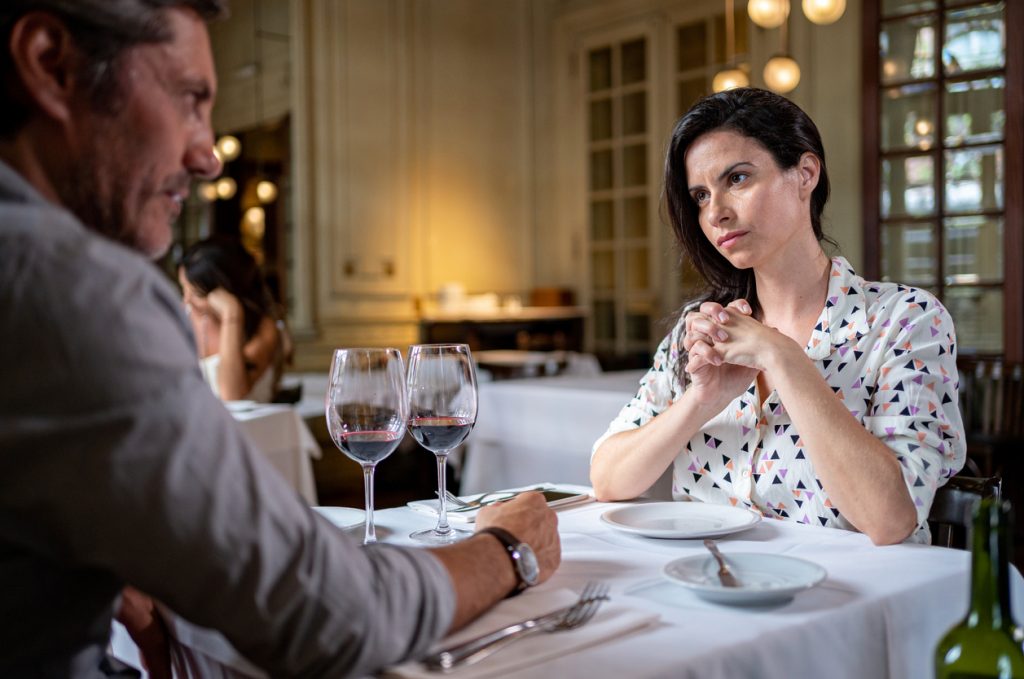 Talking about dating with a midlife single friend he asked, “Do you know men’s biggest dating fear?” Dating a psycho? No. Getting an STD? No. Those are all high on the list, but it’s not what I’m thinking of. Well, many women’s fear is abandonment, but I doubt that’s men’s fear. It’s not. Men fear that the woman he’s falling for is a poser.

When you’re dating, a woman says she loves to watch sports. So you snuggle up together to watch football, basketball, whatever. She’s right next to her man while reviewing the ESPN highlights. You take her to live games. Or she says she loves your favorite kind of food, your friends, your mother. But then, when you’re thinking ‘This has to be the most amazing woman on the planet,’ and you fall head over heels for her, things start to change.

You Discover She’s Just Been Pretending

She’s really not into sports, your friends, family or food. She’s just been going along with you thinking it will make you like her more. By the time you discover it, you’ve moved in together and now extricating yourself is very difficult. You think she is a poser, a fake. And you feel duped. So now you know to hang out longer before making the plunge. See how she is over time, after the trying-to-impress-you phase lapses.

While this man felt that this behavior was prevalent in women, I can see it happens in both genders. I’ve had men suggest movies that later I learned they loathed, but they knew I wanted to see. I think it’s our wanting to make a positive impression so we’re flexible and amenable to doing what they want. The challenge is when that impression is seared into their mind. They’re thinking that’s how you always are, or what you like.

What Happens When Those Impressions Are Wrong?

For example, I rarely drink. I may have one drink a month, and then only socially, often on a date. I’m not a teetotaler, I just know I have low tolerance so I don’t regularly imbibe. A man I dated for months brought me a gift of a bottle of port. Knowing he liked to have a glass in the evening, I’d bring it out when he was over and join him. After a few months of this behavior, he sat me down and said, “I’m concerned that you always seem to need a drink when I’m around. I’m hoping you can enjoy my company without needing alcohol to loosen up.”

I was shocked. I was only having a glass to join him, I didn’t need alcohol to be comfortable. He’d formed an opinion on why I did something based on only his limited observation — which is what nearly all of us do. I was grateful he brought it up so I could share my perspective.

Was I Being a Poser?

In a way, yes. Since I rarely drink, I was “posing” as someone who drank regularly because I had a glass of port when he was around. Did I do it to make him like me more? Perhaps. I did it to share an activity I knew he liked, just like I agreed to accompany him to exotic restaurants, even though they wouldn’t have been my choice. And he went to foreign films because he knew I enjoyed them, even though he wouldn’t have chosen them on his own. So where’s the line between pretending to like something and agreeing to participate in something you know the other likes? I think you need to verbalize what’s going on: “I wouldn’t normally choose an Ethiopian restaurant, but I know you love the cuisine so I’d like to try it with you.” “Spending Sunday watching football is not how I typically spend the day, but I want to be with you so will watch it with you.”

It’s All About Compromise

I think you have to strike a balance between only doing what you want and a willingness to try what your honey likes. If it is odious to you, share that you know he likes it, but you’d rather find things that you both enjoy. Or compromise like snuggling on the couch during the game, but you read with earphones playing music you like.

Where do you think the line between pretending to like something you don’t really, therefore being a poser, and wanting to be agreeable about joining your sweetie in activities he likes lies?

This is an excerpt from Dating Goddess’ book, Dipping Your Toe in the Dating Pool, one of the 15-book Adventures in Delicious Dating After 40 series.

>READ: OVER 50 DATING: 3 MISTAKES YOU MAY BE MAKING