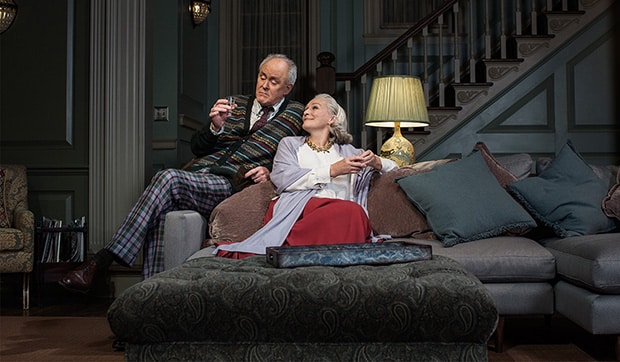 A Delicate Balance: This revival headed by a stellar cast made up of Glenn Close (Agnes), John Lithgow (Tobias), Lindsay Duncan (Claire), Bob Balaban (Harry), Clare Higgins (Edna), and Martha Plimpton (Julia) do the work as laid out by director by Pam MacKinnon. Ben Brantley of the NY Times didn’t have much praise for the cast except for Higgins and Balaban. He felt that most of the actors never really connected with their parts or brought them to life. He must have seen the play on an off night or one during which the production was still gelling. The play I saw was quite good and the actors were very much into their roles. I found them believable and not acting like specimens “under glass” as Mr. Brantley, ever the tough critic posited.

The version of A Delicate Balance that I saw last week was about a “well heeled” couple, Agnes and Tobias who had experienced their share of tragedy and were trying to have a life of balance and symmetry in the 1960’s. They had lost a young son and it had effected them deeply as well as their much married and divorced daughter, Julia. The juiciest role of Clare, Agnes’ alcoholic sister who lives with Agnes and Teddy, is hilarious and, at times, over the top. Clare gets the best lines and showboats through the funniest gags using an accordion to set the lives of the play’s participants to supposedly improvised music. 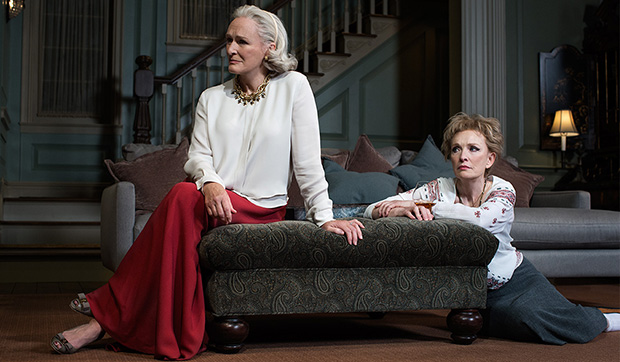 As the play opens, Julia is on her way home from California where she is leaving behind her fourth husband, “Doug.” That a 36-year-old woman still considers her mother and father’s house her home is very telling about Julia’s state of emotional maturity and tolerance for any sort of friction or unhappiness. Read: she must have her way. No matter the cost to those around her. She seems to be following in the steps of Auntie Claire’s habit to drink too much, which is duly noted by all. Yet, her father makes her strong martini’s to help her with her sorrows.

Julia is a mean-spirited, selfish woman who can excuse herself almost anything but those around her almost nothing while demanding everything from them constantly. This is a girl who just doesn’t get life. The house is about to burst at the seams immediately before Julia’s arrival when Tobias and Agnes’ closest friends, Edna and Harry, show up on their doorstep and ask to stay with them because they are “frightened.” Of what they cannot say, but they are clearly terrified. Agnes shows them to Julia’s old room trying to figure out where to put their prodigal daughter who is due to arrive at any second.

When Julia does get there, she is very put out to find someone else in her room. She wants them out immediately, but her parents won’t oust their oldest friends and we now learn that Tobias and Agnes haven’t slept together since their son Teddy’s death. They will now be forced to share a room so that Julia can have Tobias’s room, but Julia is far from placated.

Complications deepen, the visiting couple makes demands, nerves fray, and truths come out that a “balanced and symmetrical” family probably never let out into the light of day. Albee’s favorite tool seems to be hyperbole, but his use of zingers and sarcasm are also noteworthy and enjoyable.

If you liked, “ Who’s Afraid of Virginia Wolf?” and other Albee works, you will probably find this play worthwhile that runs at the Golden Theater on Broadway until February 22, 2015. Admittedly, we are in the middle of a blizzard as I am writing this review. It has been a mild winter until now in the Big Apple and theater here is always exciting. Last year was the most successful year on Broadway in history. Come be a part of it. You will be glad that you did.