The Chelsea Theater Ends its 2016 Season with a Hit! 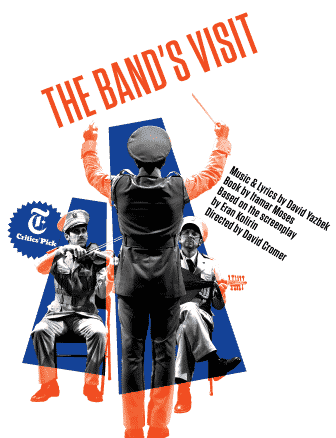 Atlantic Theater Company ended its 2016 Season with a delightful hit, The Band’s Visit by composer/lyricist, David Yazbek, who also wrote “Dirty Rotten Scoundrels,” “The Full Monty,” and “Women on the Verge of a Nervous Breakdown.”

The best  known of the ensemble cast members of The Band’s Visit would be Golden Globe and three Primetime Emmy Award winner, Tony Shalhoub of the television series, “Monk.” He played the obsessive-compulsive detective Adrien Monk for several seasons. He is also well known to both Broadway and Off-Broadway theatergoers from his roles in “The Mystery of Love & Sex” opposite Diane Lane earlier this year at Lincoln Center. Audiences also remember his “Act One” and “Golden Boy.” Several other theater, television and movie roles of his include TV’s “Nurse Jackie,” and “Too Big to Fail,” and films such as “Men in Black I and II” and “The Man Who Wasn’t There.” In The Band’s Visit, Shalhoub plays Tewfiq, the conductor of the Alexandria Ceremonial Police Band.

The rest of the cast, from Katrina Lenk, portraying Nina, to Ari’el Stachel, playing Haled, do an excellent job. People usually refer to Broadway chorus members and stars as “triple threats.” That means they can act, sing and dance, but in this case, most of the cast were “quadruple threats” with acting, dancing, singing and the ability to actually play a band instrument. Quite impressive! The cast of The Band’s Visit also had to be equally adept at both comedy and drama, for this musical contains absolutely hilarious moments as well as heartbreaking ones. Chances are good there will be someone crying near you.

The play is based on an Israeli film from 2007, and it tells the story of said Alexandria Ceremonial Police Band, which has been invited to a small Muslim settlement in Israel called Petah Tikvah to assist in the opening of the Arabic Cultural Center. Instead, in the confusion between the Arabic and Hebrew languages, the band accidentally buys bus tickets to the tiny Jewish town of Bet Hatikva.

Nothing ever happens in this minuscule crossroads. The favorite past time of local denizens is staring into the distant horizon and praying for something different to happen; anything to change up the daily grind of “same old same old.” Bet Hatikva is the kind of village with one café, two small apartment houses, one pay phone. You get the picture.

When the band exits the once-a-day bus to Bet Hatikva, the whole town shows up to welcome them and equally to give them the third degree about why they are there. The townspeople wonder if the band didn’t mean to go to Petah Tikvah. The band still can’t hear the difference in the two names, but quickly understand when locals explain that there are no Arabs in their tiny town, and certainly no culture of any kind. The band should definitely be in Petah Tikvah.

However, there won’t be another bus to get them to Petah Tikvah for another 24 hours. Since there is no hotel in this desert community, local townspeople volunteer to take one or two band members home with them to provide both food and lodging. After all, the band members represent a distinct change from the every day. It is the relationships that ensue and the revelations of each band member and each of the household members about their lives that create the humanity and depth of the musical/play.

Friendships form, and a greater understanding of the other’s culture and customs follows organically. Love blooms and all realize that the world can be changed one friendship at a time. At the end of the play, it is with sadness, but also with the attendant lift that comes when you open your heart and mind to others unlike yourself. When the curtain falls, both the band and the audience exiting the play feel glad to have been in each other’s company. The Band’s Visit, leaves you with a lightness in your step and a smile on your face. As my husband and I left the main stage of the Atlantic Theater I heard people say over and over again, “I’m so glad that I came today. I can’t wait to see it again when it gets to Broadway.”

Even though the musical’s run ended at the Atlantic on December 18, 2016, the great news is the production is moving to Broadway the instant a theater can be secured. Start watching the entertainment section of the New York Times or visit www.playbill.com or www.broadway.com for news about this winning musical’s preview and opening dates. You will be glad you made an effort to see this if you are visiting NYC in the next few months.