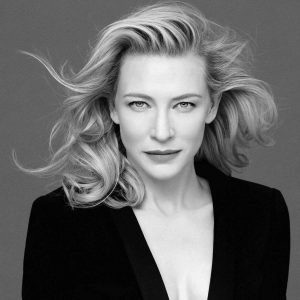 The Sydney Theatre Company’s play “The Present” is now on Broadway at the Ethel Barrymore Theater for a limited engagement. Cate Blanchett, six-time Academy Award Nominee and two-time Oscar winner leads this extremely well cast play, adapted by her husband, Andrew Upton. It is based on Anton Chekhov’s first, untitled and very long play which runs 300 pages. Upon first reading it, despite its unruliness, he saw great potential for his company to explore and actualize upon the universal themes running throughout. However, as you can imagine, it required a tremendous amount of editing and rewriting.

Mr. Upton has done several recreations of Russian classics like Uncle Vanya, in cooperation with the London’s National Theater, and most have starred his talented, well-known wife. All had been successful within Australia and on world tour.

Upton is very comfortable in the milieu of pre-revolutionary Russian drama, having adapted five other works by the likes of Gorky, another  Chekhov, and Bulgakov. Even before attempting his transformation of what he ultimately named “The Present,” the title of the play currently on Broadway, he recognized a piece in which Ms. Blanchett would shine, as would her frequent leading man, Richard Roxburgh. Upton was correct in his assumptions about the drama which is by turns extremely funny, then poignant, and finally tragic. It is Russian, after all, but presented with Mr. Upton’s fine touch.

What is incongruent about Upton’s treatment of the script is the characters all retain Chekhov’s original names, but the entire cast speaks with their native Australian accents. No attempt is made at the Russian-tinged pronunciation of the dialogue. It’s a bit distracting. With lines being emoted in Aussie sound and stress patterns, I almost laughed aloud every time that a new character was introduced with their full formal Russian name. I kept expecting more British sounding monikers. In the end, it was not a major drawback, but still off-putting somehow.

The names and the setting, which is the summer estate of a now deceased and highly decorated Russian general and his much younger wife, are basically the only nods to the work’s origins that are obvious to the audience. The general’s wife, Anna Petrovna (Ms. Blanchett’s role) was probably around 20 when she married her husband, who was at least in his mid to late 40s at the time. The young bride was almost the same age as the general’s son, Sergei, Sergei’s best friend Nikolai, and the pair’s slightly older mentor, Mikhail. All three of the young men fell in love with Anna her first summer on the estate.

As the play opens, it is supposedly modern day Russia and Anna will be celebrating her 40th birthday on the summer estate the next day. A small group of family, friends and close neighbors, including the three men just mentioned, are joining her to begin a weekend of festivities.

As the curtain rises, Anna is alone on stage, and at 47, Ms. Blanchett is much closer to 50 than 40, but she is stunningly beautiful and she does not nearly look her age. I can tell you that no camera, whether it be movie, television or still, has ever done her comeliness justice. In person, her looks take your breath away. Everything from her lit-from-within ivory skin to her beautiful long hair (yes, it could have been a wig, but the way she constantly tugs at it, putting it up in ponytails and buns makes me think otherwise) to her svelte but womanly figure command your attention. She and Upton have four children. I mention all this because her character has to have the credibility and confidence that come to a woman who has several men in love with her at once, both in the past and in the present. Blanchett carries this off with a complete and believable agency.

Then, there is her acting, which can only be described with superlatives. While the whole cast is highly competent, no one else on stage comes close to her level of acting skill or sheer star power. If she is on stage, you are watching her and no one else. Her acting ability has a rich patina to it that only comes from diverse roles, working with excellent directors and years of experience. It is no wonder that she has won so many awards. She has garnered some 10 international awards for stage acting and 17 for her work in films. She is both incredibly hard working and talented.

That is why most performances of “The Present,” which runs to March 18, 2017, on Broadway are sold out. Premium orchestra tickets are almost always available if you are willing to buy them at twice the normal price. These and other tickets to either on Broadway or off-Broadway productions can be secured through Telecharge.

The plot of the play is complex and new characters come in and out, but Cate Blanchett and Richard Roxburgh do most of the heavy lifting. At the heart of the play’s message is the truth that time and change can be stopped by no one, not even by someone as beautiful and as once powerful as the “generalisima,” Anna Petrovna. The past is the past and the present is the present, and as much as we would love to know the future, that cannot be substantially changed any more than the past according to Chekhov, anyway. Everyone can and should only focus on “The Present, ” says this master of Russian literature and his modern day Australian co-writer.

A couple of final comments for those planning to see this play, and I highly recommend it. First, it is quite long at three hours with one 15 minute intermission. Second, it is very loud. Pistols and shotguns with blanks are discharged several times in the play including the opening scene. Be warned, if an actor picks up a sidearm or long gun, they will be using it. Plug your ears and save your hearing. There is only one instance where this is not the case. Best to be safe, though. Plug your ears every time.