Travels Round the World – Rick’s Café in Casablanca

Travels Round the World – Rick’s Café in Casablanca 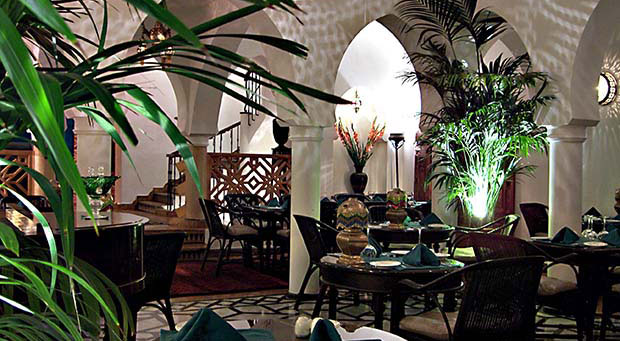 Our last evening in Morocco was spent in Casablanca at Rick’s Café, the mythical saloon from the movie classic “Casablanca” staring Ingrid Bergman and Humphrey Bogart. 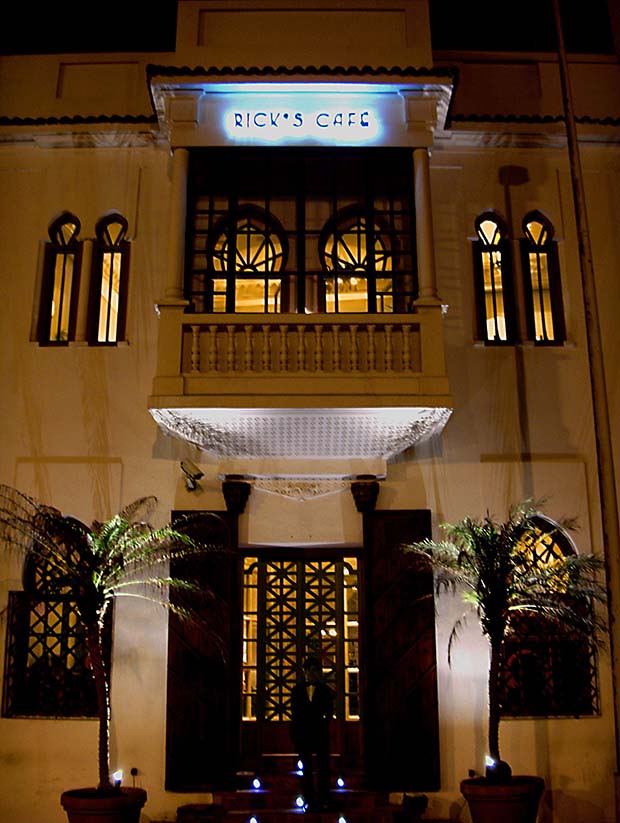 Rick’s Café is set in an old courtyard mansion built against the walls of the Old Medina. 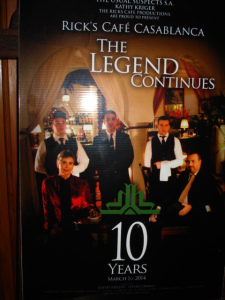 We arrived about 8:30 in the evening. The lighting and shadows on the front balcony, the entrance through heavy wooden and glass doors with palms on each side, and the greeting of the tuxedoed doorman made us feel like we were in for a memorable evening.

Inside the piano bar and restaurant, the legend of Rick’s Café in Casablanca lives on.

This year is the 10th year anniversary of the 2004 opening of Rick’s Café.

Rick’s Café, the mythical saloon from the 1942 film “Casablanca” has been transformed from a Hollywood set captured on celluloid film to a real Rick’s Café in Casablanca thanks to the imagination and determination of a former American diplomat to Morocco, Kathy Kriger. 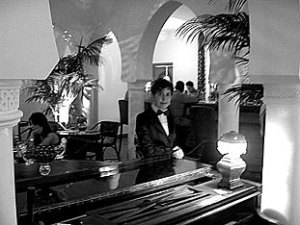 Kathy fills the role of Rick. She is present and oversees the nightly hustle and bustle in the restaurant and piano bar. 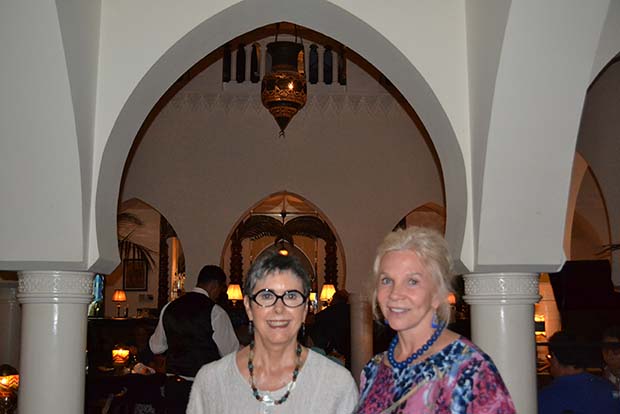 We were fortunate to meet her. Kathy is a gracious hostess and spent time telling us how she recreated Rick’s Café. Kathy worked with an architect and designer to recreate Rick’s. It took two years to construct her dream. The Grand Opening was February 29, 2004 to coincide with the Academy Awards, 61 years after Casablanca won Best Picture. 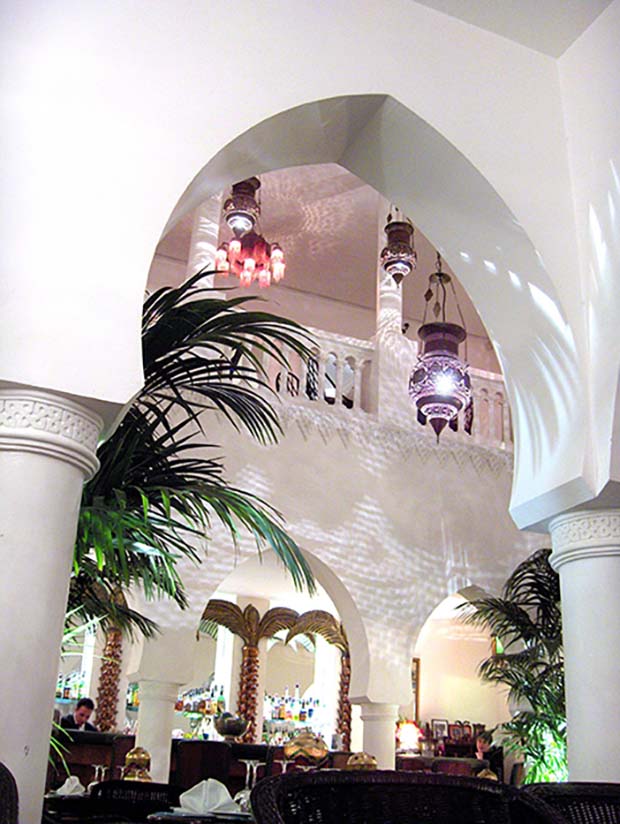 It is s filled with architectural and decorative details reminiscent of the film: curved arches, a sculpted bar, balconies, balustrades, as well as dramatic beaded and stenciled brass lighting and plants that cast luminous shadows on white walls. 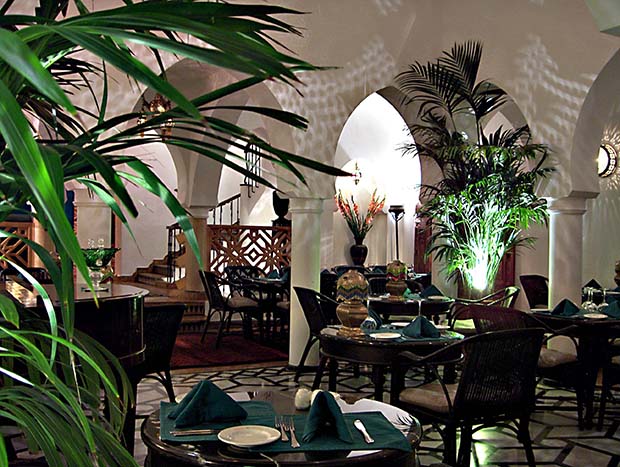 Once you walk in, you feel as though you are in the film. Great attention to detail was taken to recreate the new Rick’s. Even the inlaid floor matches! 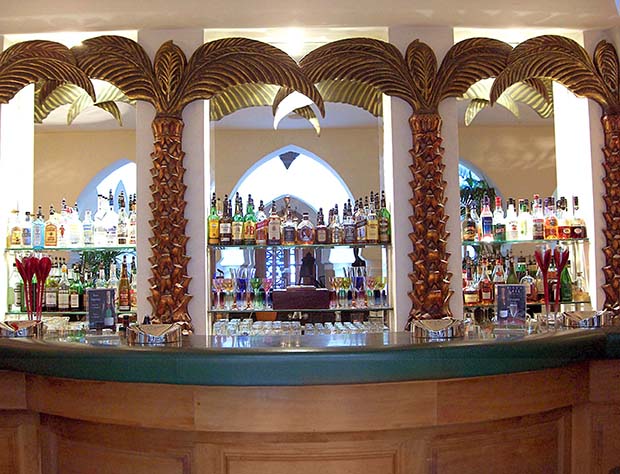 The center point of the piano bar in the downstairs courtyard is this carved palm tree bar. 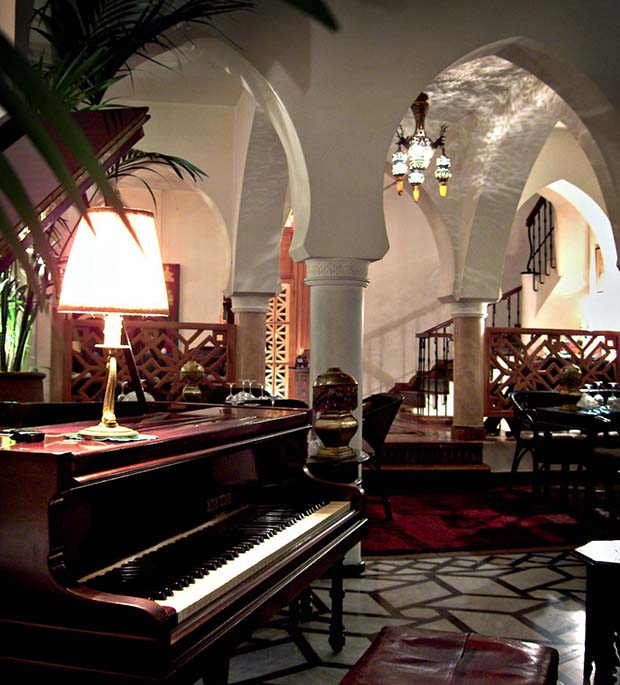 There is an authentic 1930s Pleyel piano.

As you might suspect “As Time Goes By” is a frequent request to the in-house pianist, Issam Chabaa.

As in the movie, the music is a major part of any evening at Rick’s. 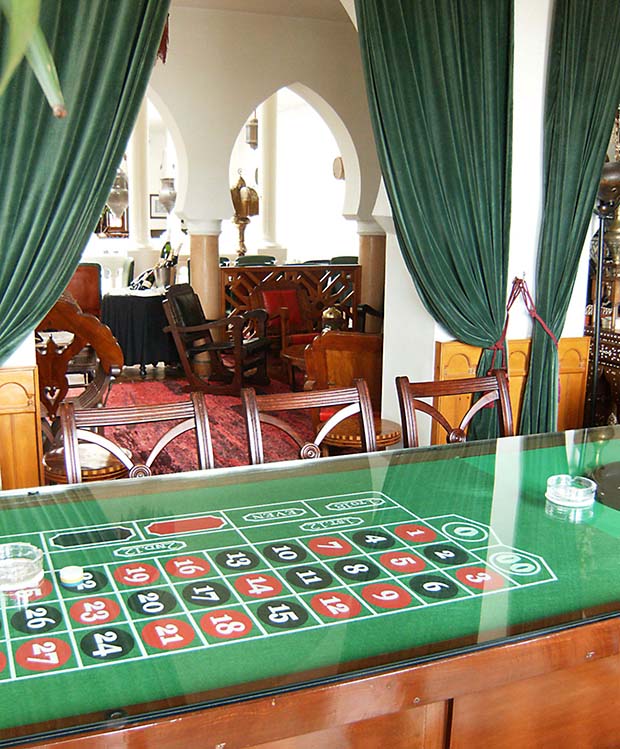 Upstairs there is even a roulette wheel, which was a featured set for several gambling scenes.

And, for an extra touch of nostalgia, the original Casablanca movie in black and white is displayed continuously on screens 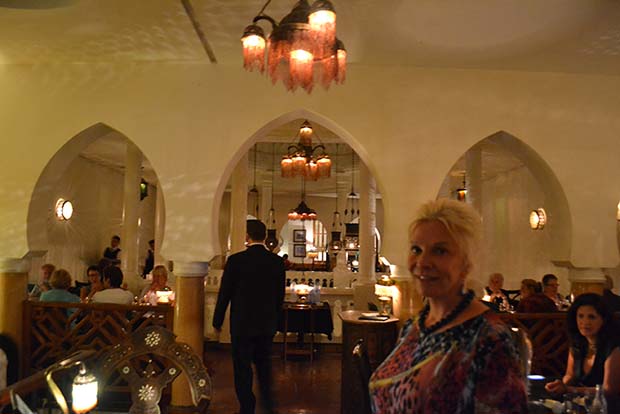 Upstairs at Rick’s is where the restaurant is located and most full meals are served.

It has the same design and feeling as the piano bar below with Moroccan columns, archways, and carved wooden screens.

Since we were on our way to the airport for our flight home, we did not have time for full dinner.

Instead, we headed straight to that famous bar to order an appetizer and a drink. 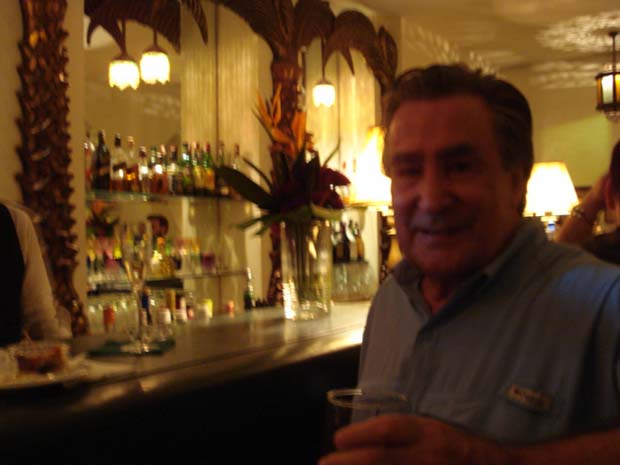 Downstairs, in the piano bar area the light are turned down low in the evening.

With beaded lamps, brass stenciled Moroccan chandeliers, and palms, the shadows on the walls are just incredible.

All of these details give you the ambiance the drama as the film.

To learn and see more of how the Legend Lives On, click Rick’s Café.

*Some photos are courtesy of The Usual Suspects S.A./Rick’s Café.

Last-Minute Gifts for Everyone in Your Life