Down East Along the Maine Coast - Prime Women | An Online Magazine

They say if you could stretch out the entire Maine coast, every bay and cove and crevice expanded into a straight line, that line would reach all the way to California, nearly 3,000 miles away. The time it would take to explore each bit of the Maine coast would take no fewer hours than a cross-country drive and in the process lose much of Maine’s convoluted coastal glory.

But vacationers from around the country are happy to sample as much of Maine’s delights as they have time for here and there, dining on fresh seafood at marina restaurants, exploring rocky footpaths and quiet inlets, and watching serene sunrises from comfy inns or cheerful lodges that range along its shoreline. The wealthy have been coming here for over a century, making it their refuge from unwholesome cities oppressed by summer heat in their breezy “cottages” not quite as grand as those in Newport but certainly as comfortable. Since travel by car became affordable, others have followed suit.

7 Best Places to Visit Along the Coast of Maine

My state of residence, Vermont, boasts beauties untold, but we do not front the ocean, so Maine is easily the number one family destination of my neighbors, and couples and single folks are every bit as welcome. Come along: 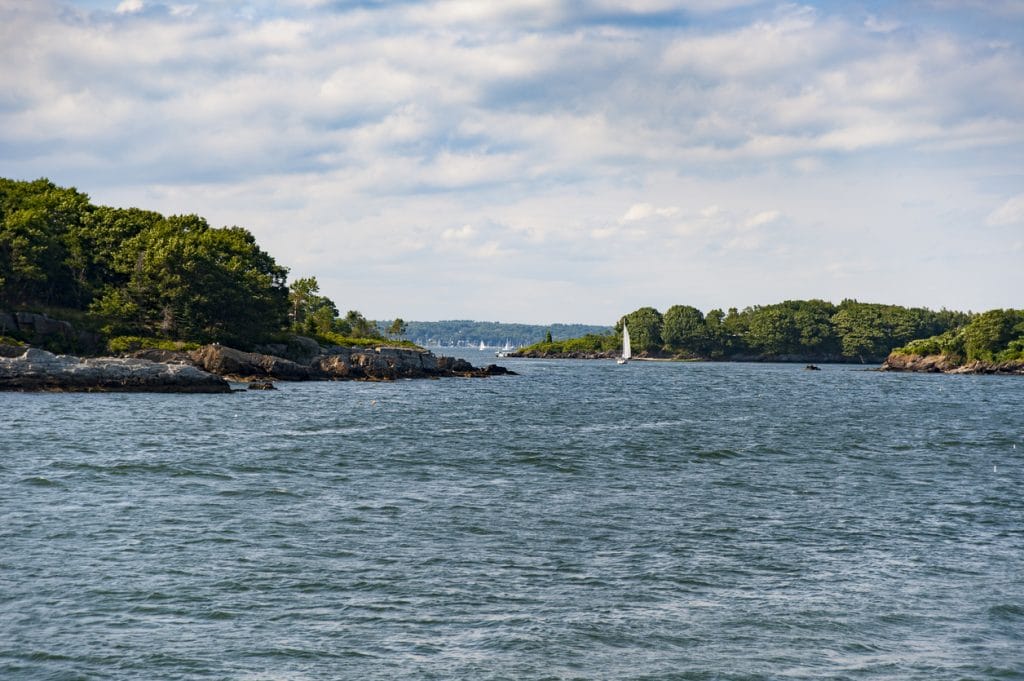 Renting a car is the way to go unless you live within a few hours of Maine. You can easily fly into Boston and combine your Maine adventure with time in that city, but Portland offers connections to just about anywhere and will save you driving time and traffic. Maine’s largest city at a mere 69,000 people, Portland, has boasted a revitalization since its Old Port Exchange was renovated for visitors back in the 70s and 80s. Portland is still an active shipping port, but now smaller marinas with pleasure boats dominate the Port along Commercial Street, and restaurants and tourist shops keep the place lively long into the night.

Try longtime classic DiMillo’s right on the water for a seafood dinner featuring some of the best clam chowder around, or pop into Vena’s Fizz House on Fore St. for masterpieces of cocktails and mocktails made with unique bitters and shrubs you can buy on-site. Rest your head in boutique-style accommodations at the Press Hotel, formerly a publisher’s offices and now the journalism-themed member of Marriott’s Autograph Collection, or the simple elegance of the Portland Harbor Hotel before a day of exploring the vibrant art galleries on or slightly inland from Commercial Street. Then spend an hour or two walking along the paths at Fort Williams for superb photos of the Portland Headlight and Casco Bay before you head out of town.

Heading South, make time for a stop in Kennebunkport for one of the best lobster rolls around at the Clam Shack, right at the bridge to Kennebunk. Then peruse the shops before driving the loop of Ocean Avenue to goggle at some of the fantastic seaside mansions, culminating with a slow drive past Walker’s Point, long the summer home of former President George H.W. Walker Bush and his clan.

The early 1900s house with 9 bedrooms is now joined by other houses and structures, a tennis court, a swimming pool, a private dock, and the vigilant Secret Service men and women who will keep you from getting too close. It’s clearly a place of privilege, and indeed people like Margaret Thatcher and Vladimir Putin have been there, but it’s also one where you can imagine generations of the family enjoying each other along with their sublime vantage point of the sea. 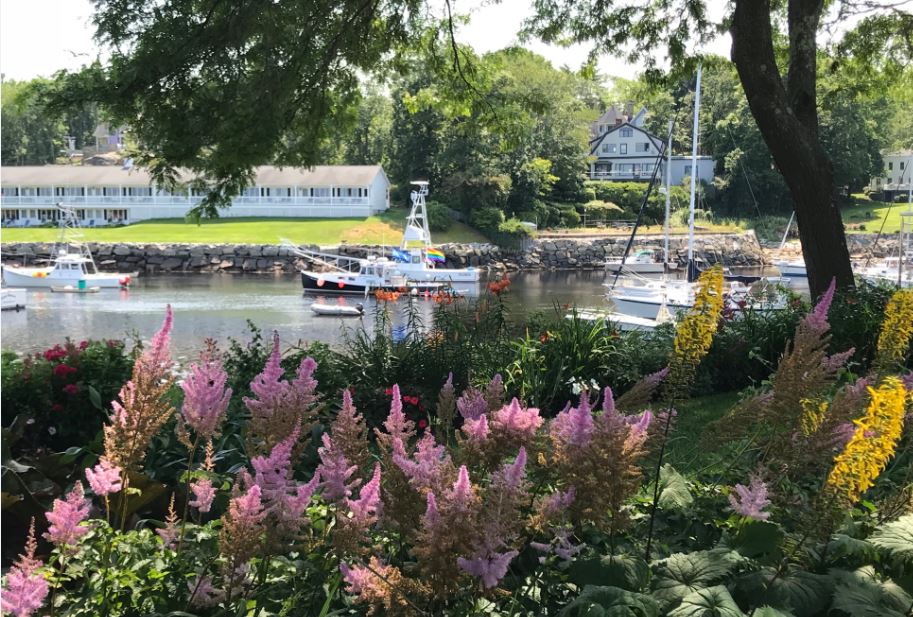 Continuing on, there are beaches, shops, motels and inns, and the ubiquitous and delicious lobster rolls to be had all along the southern coastline, including Saco, Kittery, and Old Orchard Beach. My favorite in this direction is Ogunquit, home of quaint shops, a liberal variety of restaurants and inns, and the iconic Marginal Way, the cliff side pedestrian path with magnificent views of the ocean.

You might stay at the grand but family-friendly Beachmere Inn, with roomy accommodations and a sweeping lawn overlooking the ocean, positioned right between the Marginal Way and the most charming part of town. Be sure to head a few blocks downhill into Perkins Cove and wander the shops there as well. Sign up for an informative and delightful lobster or lighthouse tour hosted by FinestKind Cruises, right there at the cove. It might be the highlight of your time in Maine.

Northward about 80 miles from Portland (or “downeast,” as the prevailing winds would have it), find Rockland, perfect for those days when rain or cold drive you indoors. View a sizable collection of paintings from all three generations of Wyeths alongside landscapes by other American artists who frequented the area at the small but impressive Farnsworth Art Museum. Just up the street is the fascinating Project Puffin Audubon Center for those interested in the natural environs; nearby is Maine’s Lighthouse Museum, and just three and a half miles away, spend time exploring the vintage collection of bicycles, automobiles, motorcycles, and aircraft dating from 1804 at the Owls Head Museum of Transportation.

After your Museum hopping, enjoy the freshest local lobster and crab imaginable at the Lobster Shack or Claws, or the culinary innovations at the intimate In Good Company. Stay right in town in one of the unique rooms at the Berry Manor Inn.

Drive a handful of miles further north from Rockland to the charms of Camden for an evening of fine dining at Peter Ott’s or Hoxbill, ice cream from River Ducks, and a sweet sleep with waterfront balcony luxuries at the Grand Harbor Inn or 16 Bay View, the latter offering a cozy fireplace bar with small plates and, seasonally, a rooftop bar. Camden’s also great for shopping of all sorts; I’ve found gifts both practical and unique at everyone’s favorite, Once a Tree. Next day you might indulge in a two hour cruise aboard the Schooner Appledore, whose winter berth is down in Key West. I enjoyed rollicking sea chanties and shipping tales performed by sailor, historian, and musician Geoff Kaufman on my recent cruise, and the versatile crew will also serve you alcoholic drinks for purchase from their nifty little gunwale bar. 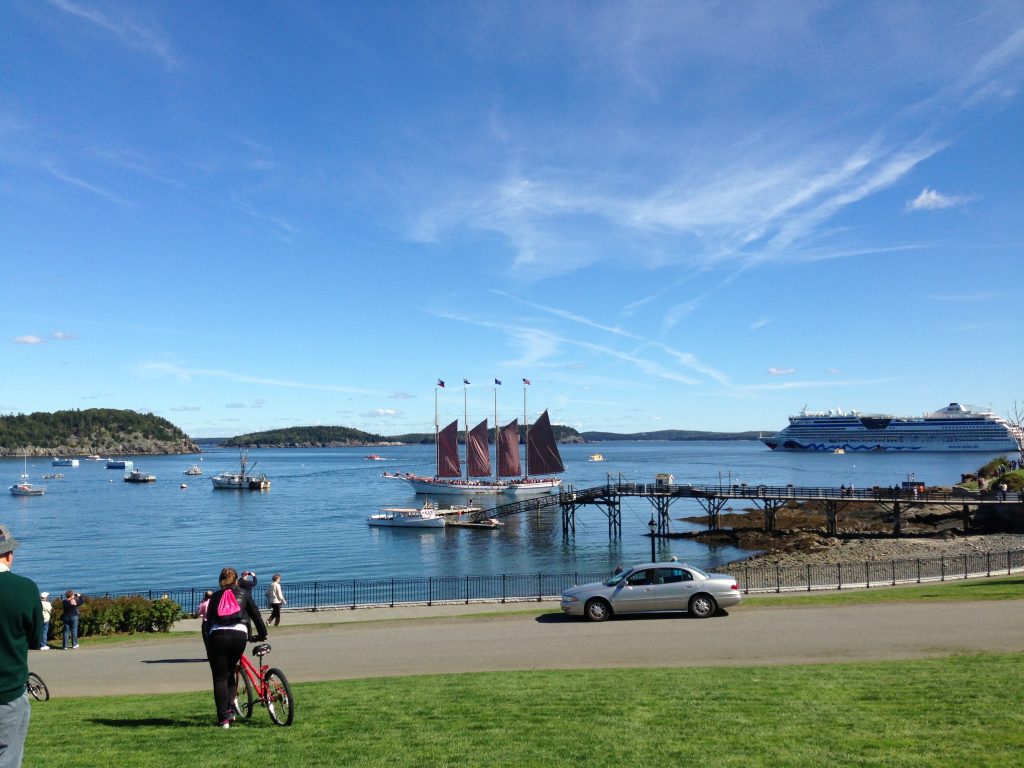 Finally, continue on up another 75 miles to Bar Harbor and Acadia National Park. You’ll still be a good 100 miles from the Canadian border, but you’ll be far enough “down east” to have a sense of your place jutting well out into the Atlantic. Plan to spend plenty of time in Acadia National Park on Mt. Desert Island, great for both driving and walking. If you haven’t yet invested in your $80 lifetime National pass for those 62 and over, this is a great place to start.

Wander the rounded granite slopes of Cadillac Mountain for spectacular views any time of day—or if you’re an early riser, view the sunrise before anyone else in the United States. Down below, snack on popovers at Jordan’s Pond and brave the chilly surf at Sandy Beach. Then go back into town for seafood or a good coffee or maybe a whale watch excursion before checking in to one of several highly rated local hotels right in the middle of the action.

The Bar Harbor Inn is touted for its divine service and resort feel; the more moderate West Street Hotel invites with its sleek modern decor and a preponderance of water view rooms. An excellent, free shuttle system will take you all around the area and the National Park in season so you can leave the traffic and parking worries behind. Some people come to Bar Harbor year after year; it’s a special place, perhaps the heart of Maine, and you’ll never forget it. 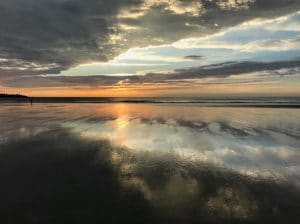 When to Visit the coast of Maine

Summer, of course, is the most popular time to pay a visit to the Maine coast, best for swimming and hiking and spending the day at one of the many outdoor festivals to be found. Between October and April everything slows down, some restaurants, museums, and inns close, and the locals reclaim their territory from the millions of visitors that call in the warmer months. But there are still plenty of fresh lobsters and oysters to dine on, museums and art galleries to enthrall, and cozy inns where you can indulge in a good book and a glass of something warming while the gales roar outside.

Often enough, the skies will clear and the wind dies down long enough to bundle up and take yourself out for a brisk and cheery walk, embracing the intricacies of rock and water you’ll see. The townsfolk you’ll encounter along the way will agree: whatever the time of year, it’s worth spending time along the Maine coast.