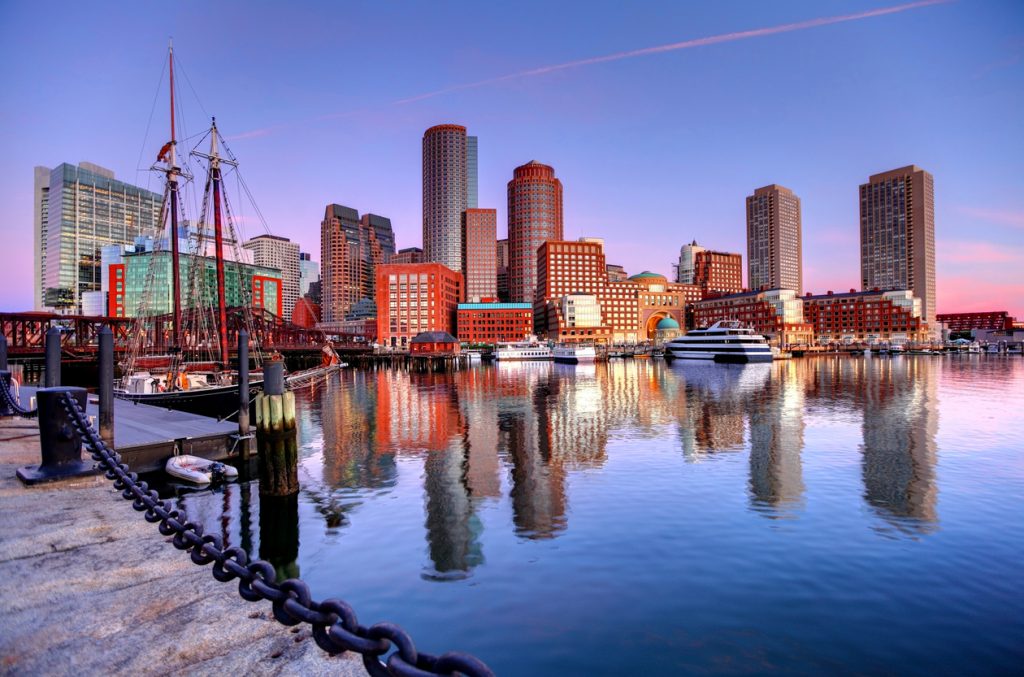 Yes, I live in the boonies of Southern Vermont, and I like it that way. But even in this pastoral wonderland, I regularly require a true Big City fix, and my closest bet is to visit Boston, one state south and just over two hours away. With Logan (BOS) as its major international airport, no matter your starting point, there’s no good reason not to visit Boston. 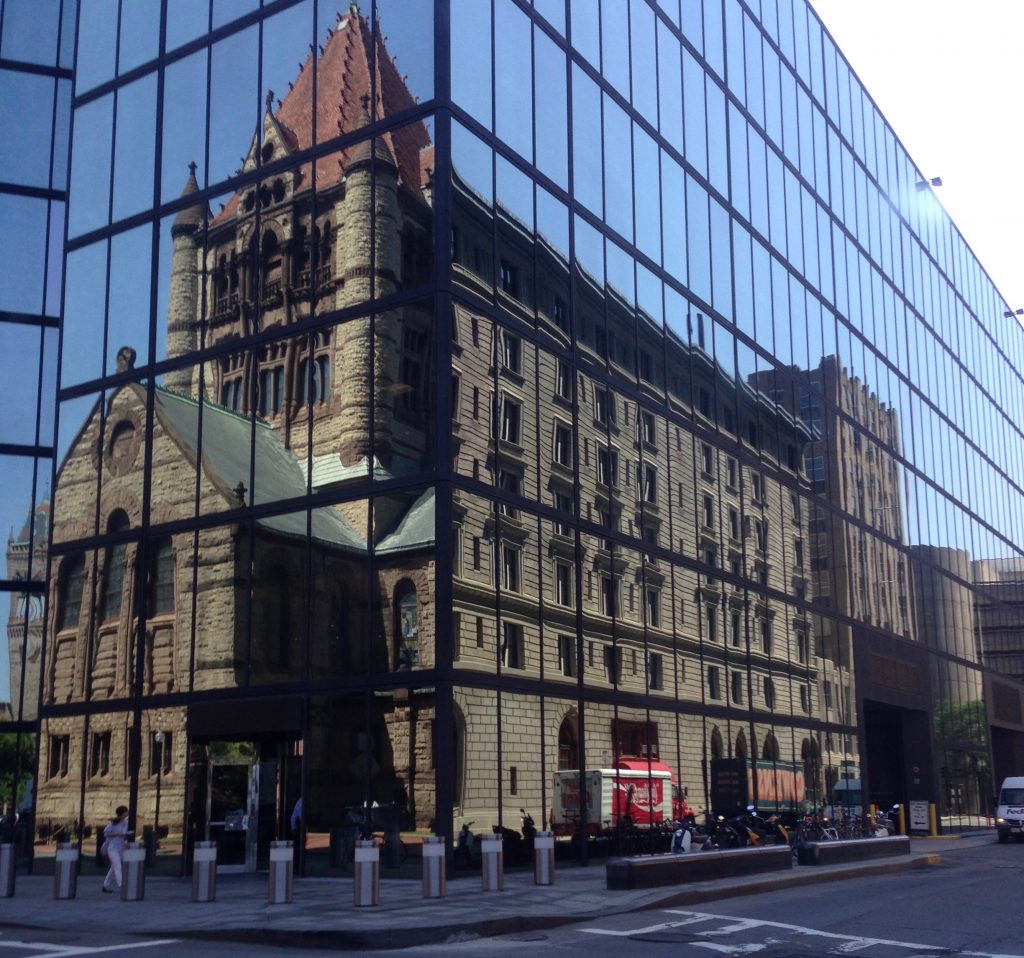 Old and New Together

With a metro population of nearly 5 million but only about 680,000 in Boston proper, the city core offers a manageable and easily walkable network of beckoning green spaces and urban architecture, from the prominently and proudly historical to the sleek and contemporary. Two iconic views, less than two miles from each other, have long symbolized this confluence for me.

The first is looking up from State St. toward the Old Statehouse, from which the Declaration of Independence was first read to a cheering populace in July of 1776, now with modern financial and government buildings towering over it; at its foot are both a marker of the Boston Massacre of 1770 and a Metro station.

The other view, near Copley Square, is the Neo-Romanesque Trinity Church, with its staid and solemn dark reds, carved swirls, and jewels of stained glass, as seen reflected in the uniform glass geometry of the 1976 John Hancock Tower. Throughout the city, evidence of events and lives from the city’s early days easily accommodate the practicalities and demands of our 21st century lives while reminding us of our place along a much longer timeline.

It will be no surprise that I echo the unoriginal recommendation that you follow the 2.5 mile red-bricked Freedom Trail through it all. Get your free National Park Service app for routing options and historical overviews of each famous site, but your educational experience will easily allow for the indulgences of a true vacation as you proceed. The harbor area makes a lovely and practical base for your visit, so check out the luxuries of the Boston Harbor Hotel right on the water or the Marriott Vacation Club Pulse in the dramatically towering Old Custom House; the Bostonian is a tad more moderate but pleasantly designed and situated right across from the Faneuil Hall Marketplace. 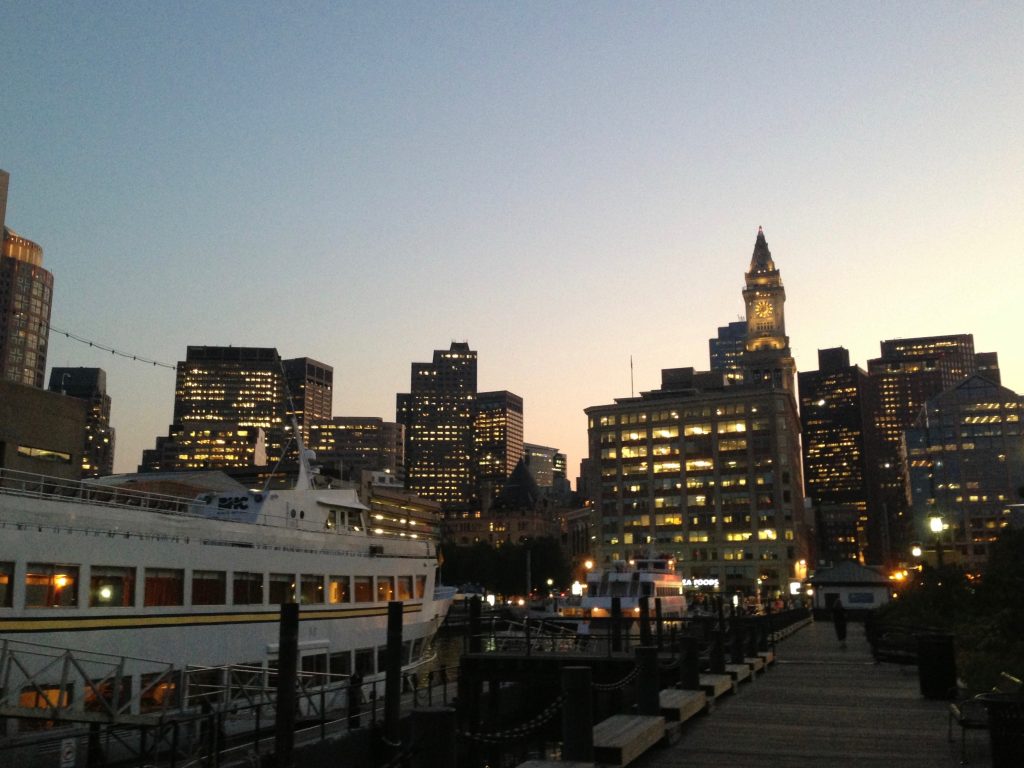 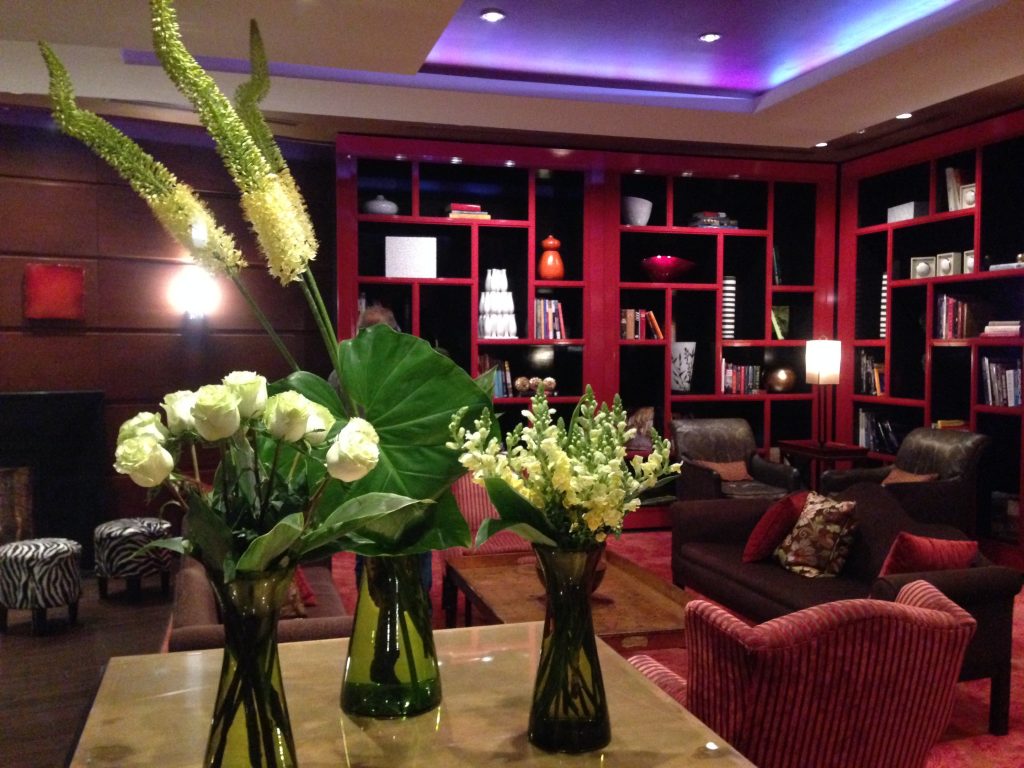 Once you’re settled in, hit the Trail. Paul Revere’s house, thought to be the oldest dwelling still standing in town, is right on the edge of the Italian North End, built on landfill. The whole neighborhood will entice the unsuspecting stroller with its smells of garlic and marinara wafting from an abundance of authentic eateries. Continue uphill and past St. Stephen’s Catholic Church, where Rose Kennedy, mother to all of yes, those Kennedy’s, was a parishioner to the Old North Church, where the Sexton hung the “two if by sea” lanterns to aid Paul and his friends.

Or go the other way to Faneuil Hall, where debaters and protesters have gathered since the country’s early days—now adjacent to all the international goodies in the Quincy Market food hall and across true cobblestone walkways (ouch! not a great place for heels!) to restaurants such as McCormick and Schmick’s and Wagamama and shops like  Ann Taylor and Vera Bradley. Enjoy the street performers all around and maybe an ice cream cone with “jimmies” (sprinkles) before you proceed onward. 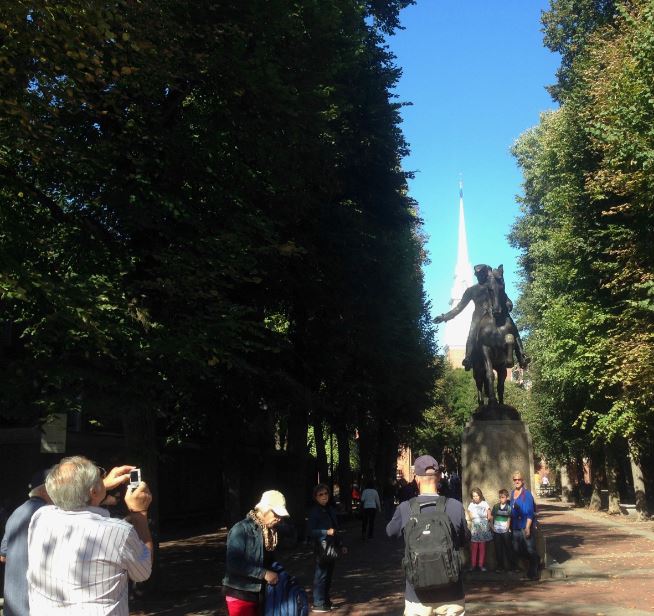 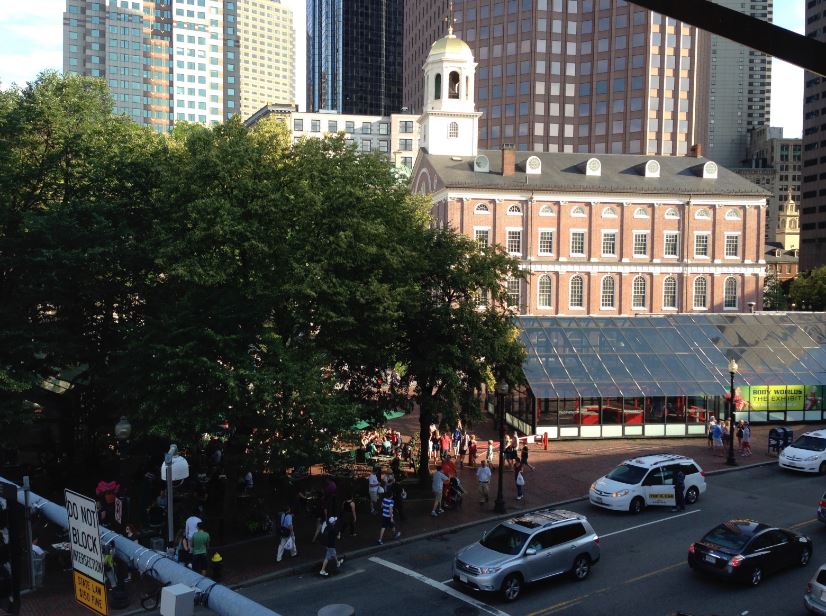 On up State Street past the Old Statehouse, you’ll reach King’s Chapel and its tiny churchyard. The carved stones on each grave are reminders of earlier centuries’ distinctive  perspectives on our mortality, with dancing skeletons and abstracts of ghost-like heads their recurring motifs. Across the street you’ll find a slightly more modern graveyard, the Granary, where notables from Revolutionary times such as Ben Franklin’s parents (Ben himself is buried in Philly, where he fled as a young man), Sam Adams, and Paul Revere have their final rating places.

There’s often an enterprising historian selling maps of each grave’s location, reasonably accurate and probably worth a few bucks if you are not part of a tour. This graveyard backs up to the modern addition to the Park Street Church, which graces the area with its chiming bells. Close by are two possibilities for your lodging, the stately Omni Parker House, home of Parker House rolls and Boston Creme Pies! and one of two places I’ve been told JFK proposed to Jackie, and Kimpton’s boutique Nine-Zero, where some rooms enjoy stunning views down into the Granary and glimpses of the modern, golden-domed State House beyond.

Through the Park to Fashion and Bargains

Stroll on across the spacious, lively Boston Common and Publick Garden for more gravestones, the iconic Swan boats on the tiny lagoon in summer, statues and flowers, and excellent people-watching. Lunch or dinner at nearby Legal Sea Food would be fitting given Boston’s access to the sea and reputation for seafood—steamed clams, oysters on the half shell, or fresh fish or lobster in a comfortable but refined setting.

At the edge of the Gardens is the Arlington Street Church, for more than 150 years a spiritual home to American Unitarian and Universalists, was the first site of a state-sanctioned same-sex marriage in the US. Just on the other side is Newbury Street, 8 full blocks offering some of the best shopping in the city. Everything from Burberry, Dolce and Gabbana, and Cartier to Urban Outfitters and Victoria’s Secret will fill your luggage in no time, and there are several places to eat and drink scattered among them for when you need a break. The locals always hit Castanet, the upscale consignment shop with carefully chosen new and near-new designer clothing and accessories.

Above It All and Beyond

Past Copley Square and the Freedom Trail you might also shop in the lower levels of the Prudential Center (Gucci, Lululemon, Kate Spade, Saks…) before buying your ticket to its top-floor Skywalk Observatory and a grand view of everything around, from Fenway Ball Park to Cambridge, where ultrafit rowers from Harvard or another of the many area universities are often just visible far below, training on the Charles River. From your perfect vantage point, consider area day trips. Salem’s “witch” trial sites and the House of the Seven Gables are less than an hour away.

Also less than an hour’s drive, Plimoth Plantation’s historical village with period re-enactors makes for an enlightening and enjoyable three hours or so (the reproduction of the Mayflower usually anchored here by the famous rock is currently being restored in Mystic, CT). Cape Cod is further, with Provincetown at its tip over two hours away, but if you don’t enjoy long day trips, that’s a wonderful place to tack on a few days. Of course, if this is your chance to enjoy the entire Northeast, you are not far from New York City, Philadelphia, and the grand “cottages” of Newport, RI.

Boston is so close to where I live that it’s an unusual year that does not find me there on three or four occasions. I realize that for many PRiME readers it’s quite a bit further, but anyone with penchants for history, lively city life, and water views should be sure to have it on their bucket list. When you visit Boston, you may find yourself falling in love and returning annually, going a little deeper into the city or further into New England each time.