What is Perimenopause? Guide to Age, Signs, Causes & Treatment

What is Perimenopause? Guide to Age, Signs, Causes & Treatment 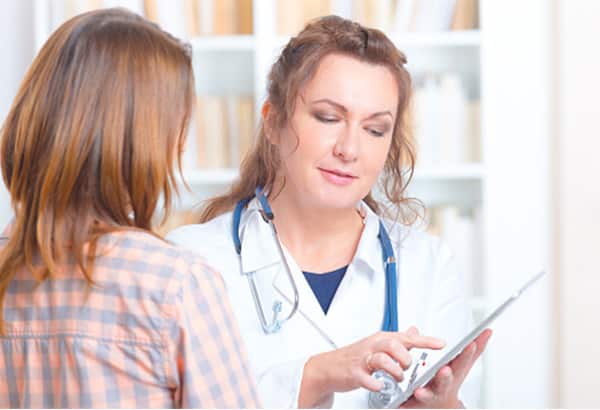 Have a pressing concern? Skip ahead to the part that matters most to you:

First, the easy part of perimenopause — the definition. Perimenopause, also sometimes known as menopause transition, begins when a woman’s ovaries start making less estrogen and progesterone. Women typically start skipping periods as production of these hormones decreases. Perimenopause lasts until menopause, defined as the point when the ovaries no longer release eggs. A woman reaches menopause after she has not had a period for 12 months in a row. At that point, a woman’s fertility is officially over.

What is the difference between perimenopause and premenopause?

When does perimenopause start?

What are the signs of perimenopause?

Hot flashes in perimenopause:
For many women, hot flashes are among the most annoying — and often most visible — perimenopause symptoms. As with many other perimenopause symptoms, they can range from a simple sudden feeling of warmth in the upper body to a flushed (hard-to-miss) face with blotchy skin. Full-on night sweats that have you tossing off the covers until it’s over are another variation. Some women have both. The Mayo Clinic also reports that a rapid heartbeat can sometimes be part of a hot flash, as can a chilled feeling afterward, in part due to the sweat cooling. The Mayo Clinic notes that hot flashes usually stop on their own within four to five years. Not all women experience hot flashes.

Sleep disturbances and insomnia in perimenopause:
Sleep problems are fairly common for those going through perimenopause because the production of progesterone, a sleep-inducing hormone, wanes along with the production of estrogen, according to the Sleep Foundation. The perimenopause symptoms in this category range from wakefulness (waking up in the middle of the night and not being able to get back to sleep) to not being able to fall asleep. Add in some nighttime hot flashes and you’ve got an evening where there just aren’t enough sheep to count. The Sleep Foundation advises creating the right “sleep environment” as one solution. The nonprofit’s tips include making sure your bedroom is dark, keeping the room as cool as possible, avoiding alcohol and tobacco, and maintaining a consistent bedtime routine, including a regular bedtime and avoiding stimulus from devices such as tablets and phones right before bed.

Hypo-desire and decreased sex drive in perimenopause:
In addition to changing levels of estrogen and progesterone, women also experience decreasing levels of testosterone during perimenopause as the ovaries gradually stop secreting this hormone. Testosterone is the hormone that affects women’s ability to get aroused and achieve orgasm.

Irregular periods in perimenopause:
Skipping periods is one of the first perimenopause symptoms women notice. After decades of having (mostly) regular periods, that first month of missing a period can be an unsettling one, especially if you’re young enough to still think you might be pregnant. Periods can also come more frequently and change in flow (everything from lighter to heavier), according to the Mayo Clinic. The clinic notes that a persistent change of seven days or more in the length of your typical menstrual cycle might indicate that you are in early perimenopause. A space of 60 days or more in the cycle might indicate you’re in late perimenopause.

Discomfort during sex in perimenopause:
Vaginal dryness and its resulting discomfort during sex can be another offshoot of changing hormones during perimenopause. While the loss of estrogen can affect mood, it is what that loss does to the vagina that can create physical issues during sex. The vagina narrows, and the vaginal wall skin grows thinner, less moist and less elastic, according to the Women’s Health Network. The result can be painful sex. Vaginal creams can help (see hormone therapy below).

Mood swings in perimenopause:
The term “perimenopause rage” didn’t just happen on its own. In fact, mood swings, from happy to sad in the flip of an emotional switch, are a common sign of perimenopause, due to the hormonal changes that are creating an imbalance in your system.

Weight gain in perimenopause:
Yes, it’s unfair but the reality is that weight is easier to gain in the perimenopausal years and that much of it occurs around a woman’s middle rather than, say, her hips.

What causes hot flashes in women?

While it’s hard to miss a hot flash — both for the woman experiencing it and for a bystander wondering why that woman is fanning her face and taking off her sweater in the middle of a meeting — understanding the cause of perimenopause hot flashes is trickier. Changes in reproductive hormones and in a woman’s hypothalamus are likely  part of the explanation, according to the Mayo Clinic. WebMD suggests changes in a woman’s circulation may be part of the explanation for perimenopause hot flashes.

Given the variety of perimenopause symptoms and that the additional variations within a particular symptom — one woman’s hot flashes may only occur periodically while another woman’s occur multiple times daily — it can be hard to know what’s considered “normal.” As with any medical concern, the best place to start is with your doctor.

What are perimenopause night sweats?

How does perimenopause affect sleep?

Perimenopause affects sleep because about 40% of women suffer from perimenopause insomnia. That percentage doubles for women approaching menopause. The issue — waking up and not being able to get back to sleep, night sweats, trouble falling asleep — likely stems from the reduction in the production of progesterone, a sleep-promoting hormone, coupled with the adrenaline rush that often accompanies night sweats.

While it would be convenient to blame all middle-age weight gain on perimenopause, the reality is that aging and lifestyle choices are also factors. What is known, however, is that perimenopause weight gain tends to be more around a woman’s middle. Hormone changes are to blame for the muffin top, WebMD notes. As estrogen levels drop, the body fat that used to be stored as a fuel reserve for breastfeeding in the hips, thighs and butt is now transferred to the abdomen. Unfair, yes, but so it goes.

Knowing what is perimenopause can be the first step in managing its effects on your lifestyle. While you can’t make the symptoms disappear, knowing what they are can relieve some anxiety while they’re happening. If you believe that you’re experiencing symptoms that are unusual or extreme, consult your medical provider for more information.

What is menopause doing to my breasts?

A Bonafide Answer to Menopause Relief

What Does Living Well Mean to You?