Have you ever heard of silent inflammation? It’s one of the biggest threats to our health and overall wellbeing, and yet we might not even know it’s going on. It can affect almost every part of our anatomy, including causing damage to your heart and brain, upsetting your digestive system, making your joints stiff and achy, and even ruining the color and texture of your skin.

As additional scientific research is performed, it’s becoming increasingly clear that silent inflammation is the common link that fast-tracks aging and makes us look and feel old before our time.

That brings us to the conclusion that reducing silent inflammation throughout your body may be the single most important thing you can do daily to help you feel and look your best.

Hi, I’m Naomi Whittel. I was born in Switzerland, educated in the U.S., and have spent the past two decades traveling the world to find the most potent and effective natural health remedies available. My friend Dr. Sanjay Gupta has called me a “wellness warrior” because of the impact I have had fighting the health issues that affect our families and us.

Of all of my journeys, nothing has left a deeper and more lasting impression than the first of my many trips to India. I knew at that time that the rate of serious cognitive decline in India was far lower than in the U.S. (a trend that continues), and I knew about the emerging scientific studies focused on the spice turmeric, but what I didn’t realize was the vast amount of turmeric consumed in India on a daily basis.

In India, turmeric is used as a universal flavoring in food preparation, much like salt is used in the U.S. Except that turmeric is SO MUCH healthier than salt and offers a wealth of health benefits unseen in most store-bought (and sodium-rich) products.

Over the decade since my first visit to India, the incredible health benefits of turmeric have been the subject of thousands of scientific studies that are now pointing to turmeric as Mother Nature’s secret weapon to combat the harmful effects of everyday, silent inflammation.

Specifically, gold-standard clinical studies have shown that turmeric is perhaps the most effective natural substance on earth at inhibiting COX-2. This enzyme is responsible for sparking your body’s inflammatory response.

I have to say, consuming turmeric is now a vital part of my daily health regimen. I cook with it, drink it in tea, and take a supplement with a full research-based dose of it every day.

Let’s take a look at the warning signs of silent inflammation, as well as how you can get the right daily dose of turmeric. We’ll also dive into another key antioxidant that can help combat harmful inflammation, save you from having to deal with serious health issues, and keep you looking and feeling younger than your years.

As scientists begin to understand the body’s complex systems better, they’re developing a clearer picture of how silent inflammation can impact your health. Here are six of the most common symptoms:

Research has shown that memory formation and recall both suffer when the brain is inflamed. Unfortunately, many people start to believe that scattered thoughts and trouble focusing are an inevitable part of aging—but they’re not! Silent inflammation is likely the culprit.

The gut microbiome is so complex that it is sometimes referred to as a “second brain.” And while many factors can disrupt its delicate balance, digestive issues can often be traced to harmful inflammation within the digestive tract.

High levels of CRP are an indication that inflammation is present in your body. The data linking high levels of CRP to increased heart risk has led a growing number of physicians to routinely run a test for cardiac-specific C-reactive protein.

Silent inflammation creates heightened pain sensitivity in the body, as well as common everyday aches and pains in joints and muscles. If your body feels sore and stiff, systematic inflammation is likely to blame.

Silent inflammation is the hallmark of the redness, itchiness, flaky skin, and discomfort associated with many common skin conditions.

A growing body of evidence has shown that inflammation triggers increased production of cholesterol. The body attempts to protect the lining of blood vessels and arteries from damage, often leading to harmful levels of build-up and serious cardiovascular issues.

If you’re experiencing one or more of these six symptoms, it’s time to get proactive. You can safely and naturally combat harmful silent inflammation, which will save you from having to deal with serious health issues and avoid unnecessary aches, pains, stomach issues, or memory problems.

The Strong Connection Between Inflammation and Brain Health

Of all the health issues associated with harmful silent inflammation, perhaps the most serious are those related to brain health. And this is where getting a research-based dose of turmeric every day can work wonders.

A recent landmark study found that turmeric promotes the production of brain-derived neurotrophic factor (BDNF), a growth hormone responsible for youthful brain function. According to scientists, higher BDNF levels may hold the key to improved memory and sharper thinking as you age.

What’s more, a recent study found that daily turmeric intake produced short-term memory improvements in adults over 60 who were predisposed to memory loss. It worked like a six-hour memory boost!

And perhaps most exciting of all, preliminary research indicates that turmeric may inhibit the formation of debris fragments that can lead to age-related cognitive decline. This may be the result of curcumin, the active ingredient in turmeric, being one of the few substances on earth with the ability to cross the blood-brain barrier.

These brain health benefits alone are enough of a reason to take a research dosage of turmeric every day. But the benefits of controlling harmful silent inflammation are MUCH more wide-ranging than that.

Turmeric Also Benefits Your Heart, Joints, and So Much More

But There’s a Catch: Turmeric Doesn’t Work As Well Without This One Key Ingredient.

We don’t all agree on much these days, but I think we can agree that we all want to look and feel younger and healthier than our age.

And there is little doubt that controlling harmful inflammation is vitally important to achieving what I like to call “healthy longevity.” By looking at the aforementioned research, it’s hard to argue with the idea that making turmeric part of your daily health routine is an essential part of achieving this.

But as beneficial as turmeric is, there’s recent scientific research that points to yet another essential nutrient for maintaining youthful vigor. And this is one area where turmeric falls short of being a “perfect” remedy.

The Secret to Turmeric’s Success

Have you ever heard the term French Paradox? In a nutshell, it means that despite a high-fat diet loaded with cheese, fatty fish, and fatty oils, the French have significantly lower incidences of serious heart problems compared to Americans, and one has to wonder why.

Research indicates that the mitigating factor is that the French typically drink red wine – lots and lots of red wine.

As it turns out, red wine is a GREAT source of one of the most uniquely potent antioxidants on the planet – resveratrol.

This is vitally important because, over recent years, resveratrol has been the subject of thousands of clinical studies, and only the active compounds in TRANS-resveratrol have been scientifically shown to provide documented health benefits.

This research shows that this “super-antioxidant” helps increase a group of seven proteins called sirtuins which together have been nicknamed the “youth genes.” According to this research, the more sirtuins you have, the better chance you have of what I call “healthy longevity.”

But the downside is that to get the full health benefits of resveratrol, it would take drinking as many as 100 glasses of wine per day – clearly neither practical nor advisable! An easy fix? In addition to turmeric, consider adding a trans-resveratrol supplement to your health regimen every day.

“If I Could Only Take One Supplement Each Day, This Would Be It”

I’ve been deeply involved in the world of healthy living and nutritional supplements for more than 20 years. And during this time, I’ve had a hand in developing over 300 successful wellness and anti-aging formulas.

My business and my passion are to tap into the best scientific minds and ingredient resources from around the world to bring the most effective natural wellness nutrients to you and in their most pure and potent forms. 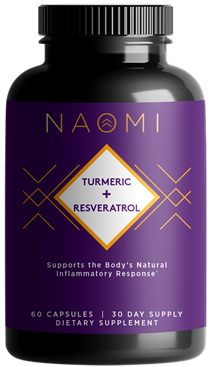 While many highly-effective nutrients are available to address specific health concerns, they typically don’t cover many bases. However, there is nothing that comes close to turmeric and resveratrol for overall everyday wellness. And in times like these, our bodies need all the health support we can get.

That’s why I make sure to take both of these super-nutrients every day in therapeutic doses… and so should you.

And to make taking these two “super-nutrients” as convenient as possible, I’ve combined them in one potent antioxidant formula, simply called  NAOMI Turmeric + Resveratrol

I know that isn’t a very creative name, but sometimes simple is best when dealing with essential basics. With the convenience of two easy-to-swallow veggie capsules per day, NAOMI Turmeric + Resveratrol provides:

Naomi Whittel is a New York Times bestselling author and women’s health advocate with an insatiable curiosity for the healing power of nature. She was born in Switzerland, educated in the U.S., and has spent the past two decades traveling the world to find the most potent and effective natural health remedies available.

Magnesium for Sleep: 6 Best Magnesium Products in the UK (2023)

How to Get the Best Updos for Short, Thin Hair

15 Fabulous Half Updos for Thin Hair