In Search of San Francisco – Part 2

In my first post of this series, I introduced readers to some of the lesser known attractions on San Francisco’s waterfront. This time, I’m going to venture into that most iconic of San Francisco locales, to introduce some lesser known things to do in Golden Gate Park.

Things to Do in Golden Gate Park

The only statue of a woman in all of Golden Gate Park? That would be the Pioneer Mother Monument in Pioneer Meadow, on Stow Lake Drive. This monument memorializes the many women who participated in the western migration of the mid-1800s, traveling the California and Oregon Trails and sustaining their families through well-documented hardships. Created by Charles Grafly, this towering bronze statue had a prominent place in the 1915 Panama-Pacific International Exposition and was destined for an equally prominent place in Civic Center but never made it. After languishing for years in Lincoln Park near the Legion of Honor, the statue was transferred to its present location in 1940.

Nearby is the Pioneer Log Cabin, built as a meeting house for the Association of Pioneer Women of California in 1911 and expanded in 1931. Constructed of unpeeled redwood logs from Humboldt County, the building has two rustic masonry chimneys. An extensive renovation in 1995 preserved most of the cabin’s historic integrity. The meadow is a welcoming recreation spot, with picnic tables and barbecues that can be reserved for group events.

At the opposite side of the meadow from the Pioneer Log Cabin is the Arch of Colonial Trees, a graceful allée of trees first planted in 1896 on the 100th anniversary of the surrender of Lord Cornwallis at Yorktown in the Revolutionary War. Sent from the original 13 colonies, the trees were planted using a silver trowel whose handle was made from wood of a magnolia planted by George Washington at Mt. Vernon. Some of the original trees still remain, while others have been replaced over the years.

World War I monuments are surprisingly scarce in America, perhaps because the United States entered the war relatively late (1917) and suffered less than 1% of the 41 million total casualties. Thus, it comes as something of a surprise to discover that Golden Gate Park has two World War I monuments.

The Heroes Grove, home to the Gold Star Mothers Rock, is tucked between Fulton Street and JFK Drive just north of the DeYoung Museum. Finding the site can be a bit of a challenge as there’s no signage, but Google Maps will get you there. This beautiful grove of coastal redwoods provides a serene environment in which to relax, and the light shining through the trees can be magical. 12,000 people attended the dedication of the Heroes Grove on Memorial Day, 1919. On Armistice Day, 1932, another sizable crowd attended the installation of the Gold Star Mothers rock, a 3-sided 18-ton granite boulder inscribed with the names of 761 local men and women who died in the Great War.

Continuing down JFK Drive just past the Rose Garden is the Redwood Memorial Grove, planted in 1930; adjacent to the grove is the Doughboy Meadow, site of the charming Doughboy Statue. “Doughboy” is an informal term that was used to describe the American Expeditionary Forces in World War I; its origins are unclear. This bronze sculpture is one of the many examples in Golden Gate Park of the work of M. Earl Cummings. Created in 1928 for an international exposition, the statue was acquired for this site through public subscription at a cost of $6,000, under the aegis of the Native Sons and Daughters of the Golden West. 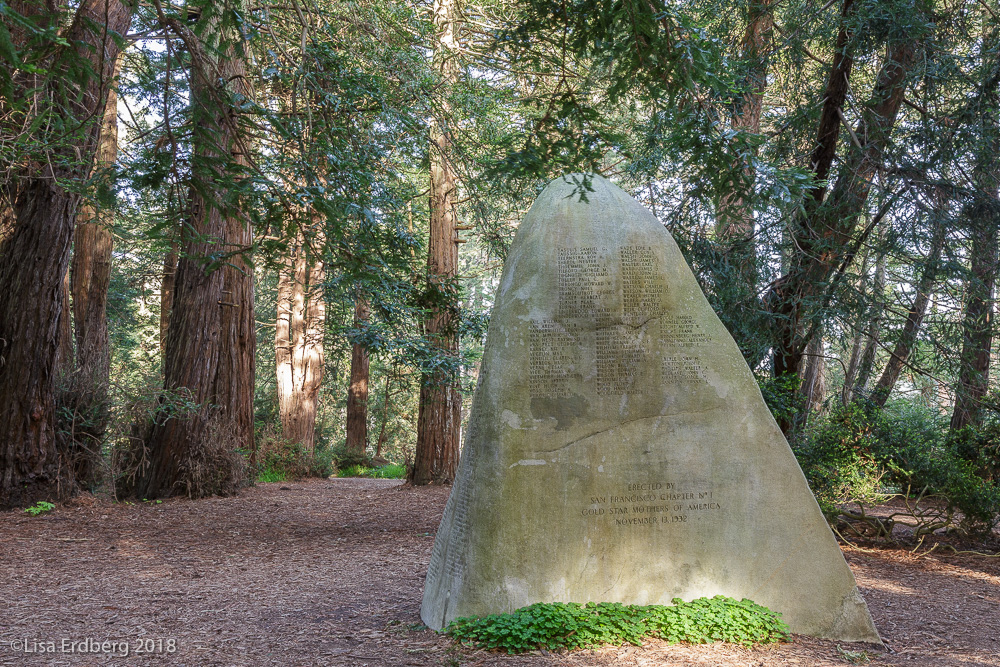 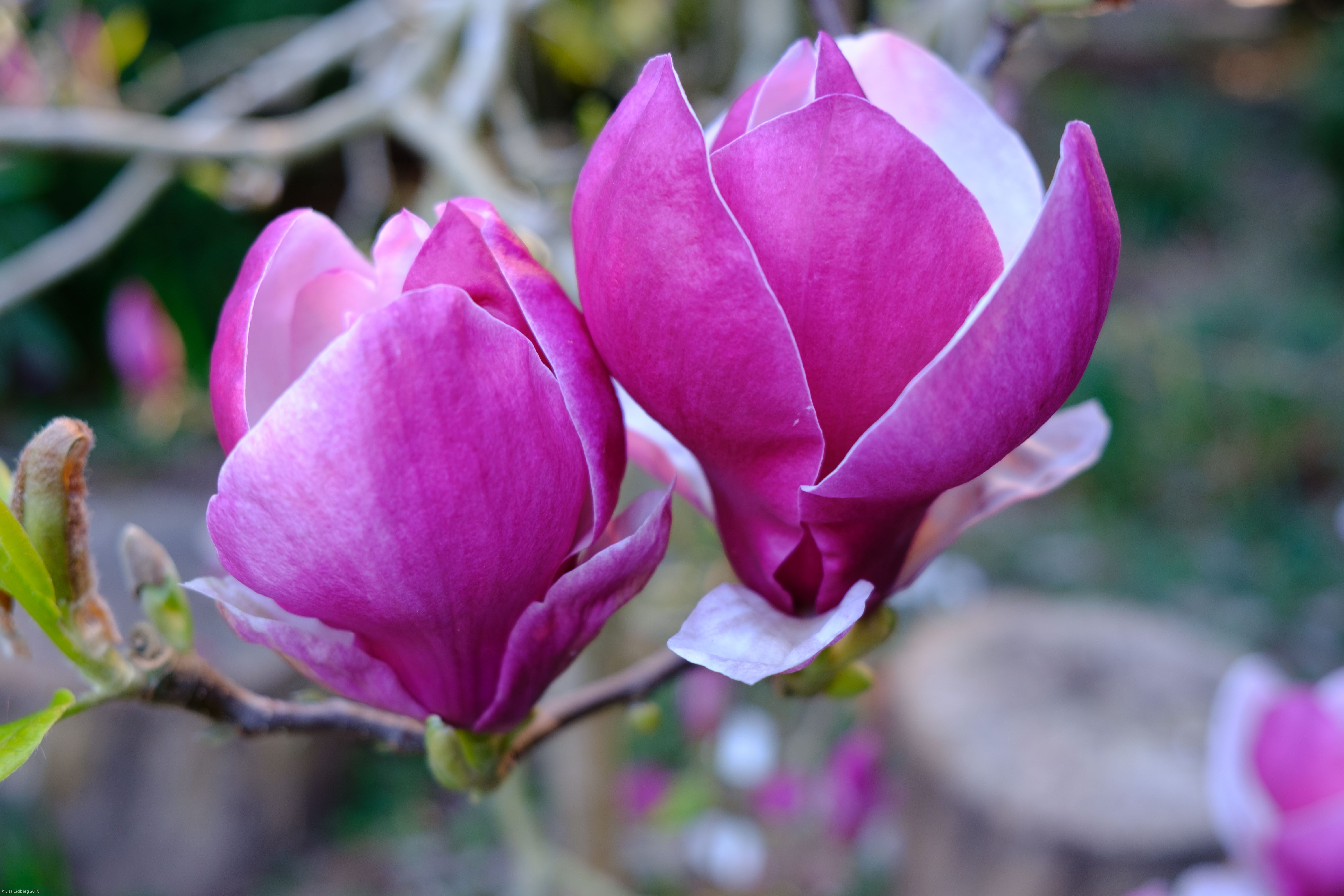 While the Japanese Tea Garden is a major tourist attraction, the San Francisco Botanical Garden, or Arboretum as it’s still known to locals, is seldom visited by tourists or even by San Franciscans who don’t live nearby. The garden’s 55 acres contain more than 7,500 varieties of plants, flowers, and trees, with a particular emphasis on magnolias. The mild Mediterranean climate allows a vast array of species to thrive here, including some that are no longer found in their native habitats.

One of the most tranquil and harmonious places in the city, the Garden has numerous paths that crisscross the various collections as well as strategically placed benches for rest and contemplation. There are broad open spaces and secluded nooks and crannies–something for everyone. My favorite is the Moon Viewing Garden, a secluded spot inspired by the Japanese tradition of gathering to celebrate the full moon. I also love the nearby Redwood Grove, the Garden of Fragrance, and the Mesoamerican Cloud Forest. Each season brings its own horticultural highlights, making the Garden a rewarding destination all year round.

4. The Garden of Shakespeare’s Flowers 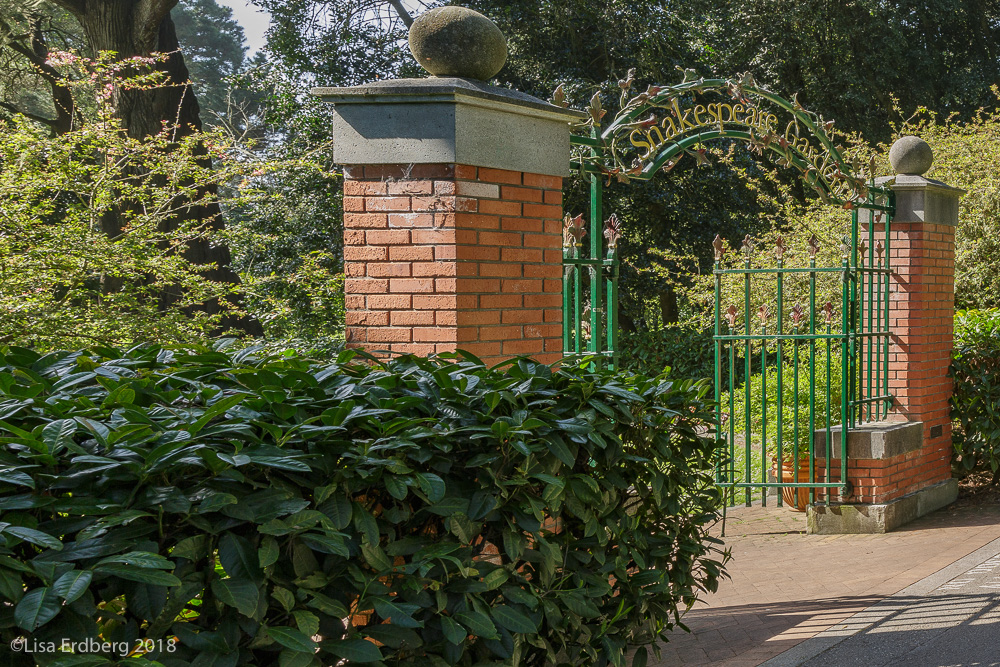 Entrance to Garden of Shakespeare’s Flowers

This delightful enclave, just west of the always-busy Academy of Sciences, is another haven from urban hustle and bustle. Planted in 1928, the Garden of Shakespeare’s Flowers contains over 200 plants, flowers, and trees, all mentioned in Shakespeare’s works. Just inside the wrought iron gates is a sundial, and at the far end of the garden is a curved wall with a bust of Shakespeare housed in a central niche. Around the wall are bronze plaques with verses from some of Shakespeare’s most famous works.

Although the garden is a popular wedding venue, I’ve encountered few people there on weekdays, usually moms sitting quietly with infants in strollers or solitary individuals. Oddly, on my most recent visit I found 3 men using the garden to practice some variety of hand-to-hand combat in front of the bust of Shakespeare–a jarring juxtaposition, to say the least!

This one is no secret, but I couldn’t let you leave without mentioning it for things to do in Golden Gate Park. Ascending 144 feet to the observation floor of the Hamon Tower at the DeYoung Museum, you’re treated to a 360-degree view of San Francisco and the Marin Headlands. Even better, it’s absolutely free! You won’t be the only one there, and you may even have to wait in line for the elevator. But I guarantee you’ll be glad you took the time to enjoy the spectacular view.

In Search of San Francisco - Part I