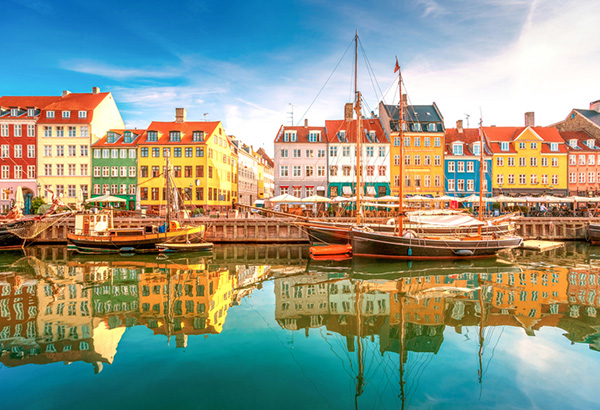 The Many Faces of Copenhagen

Copenhagen, the capital of Denmark, is a fascinating city and worth a few days visit. History and traditions are visible everywhere, mixed with a vibrant lifestyle and a distinctive contemporary architecture. Everyone speaks excellent American English, and guided tours are provided in English everywhere. With so many things to do in Copenhagen, you’re sure to enjoy your time there.

Copenhagen is a fairly compact city, best discovered on foot. Wander and get lost in the meandering streets of the old center, in and around Strøget, the main shopping street. The mode of transportation favored by locals is the bicycle. Bike lanes are wide and very safe. Several recent bridges, such as the Circlebroen Bridge or the Inderhavnsbro near Nyhavn, are reserved for pedestrians and cyclists. The Copenhagen Metro only has two lines. It is extremely modern, fast, clean and easy to use. The bus system is also very efficient.

Tourists should buy the Copenhagen Card when they land at the airport. It allows for public transportation within the city, for train travel within the metropolitan area of the capital and most of the Zealand island. It also offers free or discounted admission to many museums and sightseeing tours. Since you don’t have to purchase tickets, you can also skip the lines. Choose the card depending on the length of your stay: 24, 48, 72 or 120 hours.

The Three Royal Palaces in Copenhagen

The oldest royal palace in Copenhagen is a Dutch Renaissance-style castle located on the edge of the beautiful King’s Garden. This park is perfect for a quiet stroll before or after the visit of the castle. Built for Christian IV in the 17th century, Rosenborg is now a museum. Highlights of the visit include the Crown jewels and the Coronation chair. Music lovers, don’t miss the impressive 18th century musical cabinet, exquisitely renovated a few years ago. Visitors can appreciate its enchanting music while visiting the rooms on the second floor (marked “First Floor” on the castle map).

Children will enjoy looking at the naive paintings of royal horses presented in the staircase. Painted well before the film and motion experiments of Eadweard Muybridge at Stanford, the poses of these Danish horses appear sweetly old-fashioned to our modern eyes.

Divided into four identical but distinct buildings, Amalienborg is now the residence of the royal family. The complex was built in the 18th century, in the Danish rococo style, for four aristocratic families. When Christiansborg Palace (royal residence at the time) burned down, the royal family purchased Amalienborg and moved here. Nowadays Christian VIII’s palace is open to visitors. Thus, tourists can step into the private world of the royal family and learn about its recent history. The Changing of the Guards takes place at 12pm every day.

This palace is the seat of Danish Parliament, the Danish Supreme Court and the Office of the Prime Minister of Denmark. In fact, it is the only building in the world to house the three branches of government. The present edifice, inspired by neo-baroque and neoclassical styles, was built at the beginning of the 20th century. Several sections compose the visit:

The Royal Reception Rooms, still used for official functions, are the main attraction. Discover the Throne Room, the Velvet Room, and the Great Hall, adorned with splendid tapestries about the 1000 year-long history of Denmark in the Great Hall.

The entrance to the Royal Chapel (1826) is on the other side of the building. Royal events such as weddings, baptisms, and most recently for Prince Henrik’s funeral service, still take place here.

The Ruins Under the Palace display the foundations of the building and the archeological remains of a wall from bishop Absalon’s palace (11th century).

In the courtyard outside the palace, the queen’s horses practice their skills. The Royal Stables are the only remaining building from the baroque palace. Apart from the horses, the stables house the carriages used in important ceremonies.

Finally, climb to the top of Tårnet, the highest tower in Copenhagen. From here, observe the old stock exchange building, or Børsen, and its extremely distinctive spire: four dragons with their tails intertwined.

Furthermore, it is sometimes possible to visit Parliament, depending on the sessions.

More Things to Do in Copenhagen

To the north, the Kastellet or Citadel is now a large park within the old star-shaped fortress (17th century). Swans and ducks add a romantic touch to the moat that surrounds it. It is a peaceful area, despite its continuous military use.

Just south of the Little Mermaid, the impressive Gefion Fountain, depicts the Norse goddess Gefjon, plowing the earth with the help of four powerful oxen. She is creating the island of Zealand, pulling ground away from Sweden.

The Round Tower (17th century) is the oldest functioning observatory in Europe. A spiral ramp takes visitors up to the observation platform. This is a good attraction at the beginning of a stay in Copenhagen as it helps to get a sense of the city.

Nyhavn or New Harbor is one of the most picturesque areas of Copenhagen. Its colorful façades offer a cheerful setting for a stroll on the wharf or eating lunch on the terrasse of one of the many restaurants. In addition, there are several canal tours leaving from Nyhavn. I found our one-hour cruise very informative and thoroughly enjoyed this approach to the low bridges and narrow canals between the islands that compose the city. We used the Netto-Boats, one of the companies that offer free tours with the Copenhagen card.

Children (and adults) will have a pleasant time at the Hans Christian Andersen Fairytale House. Several stories are presented in old-fashioned tableaux, with commentary in English. Truly a perfect opportunity to let your childhood favorites come back to mind and share them with your children and grandchildren!

The Tivoli Gardens, an amusement park is a great place in central Copenhagen to spend a few hours. It offers various attractions: concerts, theater, rides, or dinner. Despite its popularity, the park is closed during the low season.

Christianshavn is home to the Bohemian community of Freetown Christiania. It claims to be an autonomous anarchist district and several hundred people live here. Also in this district, the baroque Church of Our Savior is a major landmark due to its unique twisted spire and external staircase. Note: the spire is closed during heavy rain.

Den Blå Planet is one of Europe’s largest aquarium and an ideal destination during a rainy day. As in many modern aquariums, it presents its collections in several ecosystems: African Great Lakes, Rainforest, Warm Oceans, Cold Waters (featuring Denmark’s species) and the Evolution section. More unusual is the very large tank dedicated to sharks and rays. Watching these magnificent animals evolve underwater is truly thrilling. Despite being located in the suburb of Kastrup, the aquarium is easily reached via public transportation.

Food and Drink in Copenhagen

Spisehuset in the Inner Vesterbro district is a fantastic place for a romantic dinner: creative courses made with fresh local ingredients, great wine pairing and a dynamic atmosphere. Note: the restaurant is located in a back alley and is a little difficult to find. As the dining room is small, plan ahead and make a reservation.

Havfruen is a seafood restaurant in Nyhavn, serving Danish food, including the famous “open sandwiches” or Smørrebrød.

Papirøen is the perfect place to relax and enjoy lunch by the water. Food trucks offer street food dishes prepared with locally and sustainably produced ingredients. As in many other similar venues, music, art and culture liven up the market.

A Day in Roskilde

Take the train from the Copenhagen Central Station, located near the Tivoli Gardens. Roskilde is only 30 minutes away and there are many trains going through Roskilde during the day.

Located at the southern end of a deep fjord providing protection and safety during the Middle Ages, Roskilde was capital of Denmark from the 10th to the 15th century. Nowadays, it is a very pleasant provincial town. After the bustling capital, this is a quiet  excursion into Danish countryside.

A short walk from the station takes visitors to the old center of town. Outside the train station, visitors will notice the massive jars, created in 1998 by Danish abstract sculptor Peter Brandes.

The cathedral in Roskilde has been listed as a UNESCO World Heritage Site for its historical and architectural significance. Indeed, it has been the main burial site for the royal monarchy of Denmark since the 15th century. The brick cathedral was built in the 11th century in romanesque and gothic styles. Many funerary chapels, each with its distinctive architecture, were added later to the structure, allowing for more monarchs to be buried here. In particular, notice the elaborate frescoes decorating the walls and ceiling of the Chapel of the Magi, built for Christian I (15th century). Despite their age, the colors still look fresh and vibrant.

Commissioned to work on Christian IX’s sarcophagus, Edvard Eriksen, most famous for his statue of the Little Mermaid, created three allegorical sculptures out of white marble (1908). One of them, “Grief,” is remarkably touching. The cathedral is full of history and memories of past kings, references that most non-Dane tourists won’t catch. Yet, the experience is compelling and engaging with the help of the pamphlet.

The other main attraction in Roskilde is the Viking Ship Museum. Walk down the hill toward the harbor, through the peaceful Bypark Gardens.

The Viking Ship Hall displays the five long ships, excavated in 1962 from the fjord. The guided tour is very informative and helpful to grasp the Scandinavian way of life during the early Middle Ages. The rest of the museum is a center for research and experimental archeology, most notably presenting some impressive woodworking techniques.

Board the reproductions of the long ships discovered here to get a sense of their properties. Weather permitting, the museum also offers sailing trips – expect some rowing. Discounted admission with Copenhagen card or 90-130 DKK for adults.

Lastly, Café Knarr offers “new Nordic Viking food.” While it may not be very authentic, it is certainly an enjoyable meal.

Erick van Egeraat received a commission from a local waste management company to build the Roskilde Incineration Line (2013). Not only does it generate electricity and heating for the Roskilde area, it is also a work of art. During the day, the factory is the color of amber, mirroring the brick and stone of the old cathedral. At night, lights come from the inside, evoking energy production. The factory is visible from the train to and from Copenhagen.

The Copenhagen Power Plant, also built recently, has announced the future installation of an artificial ski slope on its roof. Another example of Danish creativity and desire to combine art, leisure and necessities.

Copenhagen, familiar yet surprising, tastefully blends tradition and modernity, simplicity and new technologies focused on sustainability and the environment. Definitely enjoy the Danish way of life and Copenhagen’s relaxed atmosphere. After all, this might be the key in discovering why the Danes have been, repeatedly, nominated one of the “happiest people on Earth” by the World Happiness Report.