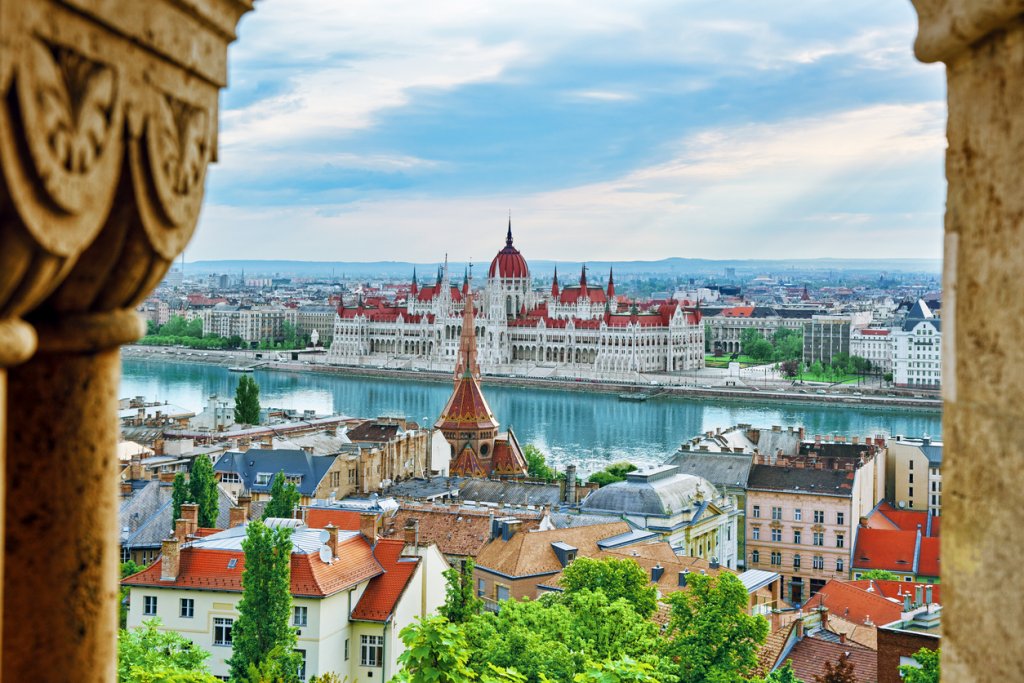 Things to Do in Budapest in 48 Hours

Budapest has been a very trendy European capital to visit for years. There are indeed many reasons to visit and enjoy this beautiful city. Hence, tourists flock there every summer to enjoy its quality of life and its incredible architecture! Young Europeans and Americans come here to party the night away in the ruin pubs and alternative bars. Major tech conferences attract engineers and designers. Shedding the last remnants of its Communist past, Budapest now is home to a booming tourist industry and new economic endeavors. In fact, it is like no other place in Europe.

If you only have a few days to spare in Budapest, here are some pointers to discover the city and its many aspects.

There are more than 300 hot springs used as thermal baths in Hungary. Some of the most famous ones are located in Budapest, the spa-capital of Europe.

Gellert Baths, at the Bottom of the Gellert Hill

One of the most beautiful bath complex in Budapest might be the Gellert Baths and Spa. The hotel, where these Baths are located, was built in 1918. As soon as you step in, Art Nouveau details dazzle the eye. The baths have been decorated in hues of blue and turquoise. Colorful mosaics and stained-glass windows adorn the entire facility. Indeed, it is difficult to choose between jumping into one of the many pools right away and calmly wandering through the complex in order to appreciate every architectural facet. People sit in the many pools, filled with water set at various temperatures, both indoors and outdoors. The most crowded pool is the large one outside, where a wave machine attracts both children and adults.

To completely enjoy a lazy afternoon, or while waiting for friends, savor a cocktail on the terrace overlooking the lawn and outdoor pools.

The Szechenyi Baths are in Pest. The gorgeous Neo Renaissance buildings are painted bright yellow and white, thus presenting a beautiful contrast with the blue pools. This is the largest bath complex in Budapest. Lap swimmers have the exclusive use of the central outside pool. Children and families can play in a warm pool with a current, while adults relax in a non-current but warm pool. Inside, smaller pools set at various temperatures fill every room.

This complex is also open in the evening, for music and partying. In fact, the Szechenyi Baths are famous for the “sparties” (spa parties) they organize every Saturday. If you are in for a quieter activity, wait for your turn to play chess while soaking in warm water. There are also several water fitness classes available to all visitors.

In addition, the Szechenyi Baths offer several spa packages. During the summer, do make a reservation for the massages and treatments as they are extremely popular.

Tip: If you want to do laps, bring your own swimming cap or rent one on site. Also bring flip-flops as floors tend to be slippery.

Cruise on the Danube

A short cruise on the river is the perfect relaxing way to appreciate Buda and Pest. Linked by several majestic bridges, the two ancient cities look completely different. 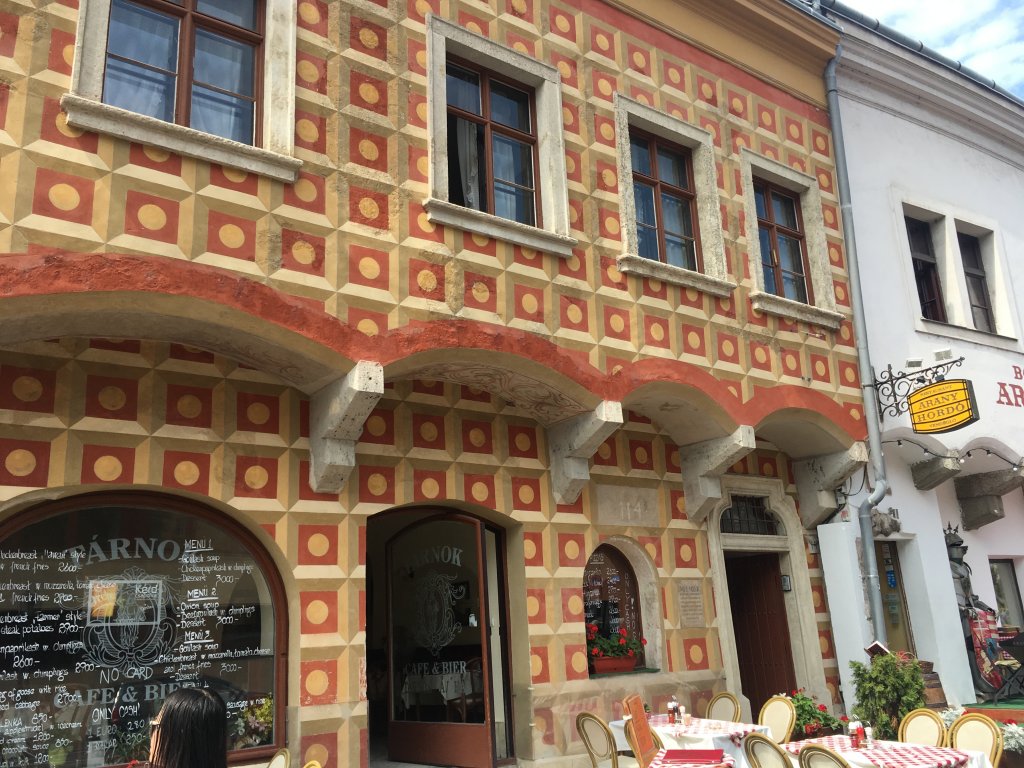 Buda, the old capital of the Hungarian kingdom, is nestled on the hill. A few streets away from the magnificent castle and the gorgeous Matthias Church, a few medieval houses still grace the cobbled streets. If you have time during your stay, go to the top of Castle hill to enjoy the panoramic view and the monuments. Buda the romantic overlooks Pest, more dynamic and modern – a compelling contrast.

On the other side of the Danube, Pest is completely flat. From the boat, the Parliament Building looks even more imposing than from the bank. It is extremely large and towers over all the surrounding buildings. White and red, built in the Gothic Revival style, it is perfectly symmetrical. Its grandeur reflects the economic and financial might of Hungary at the turn of the 20th century. 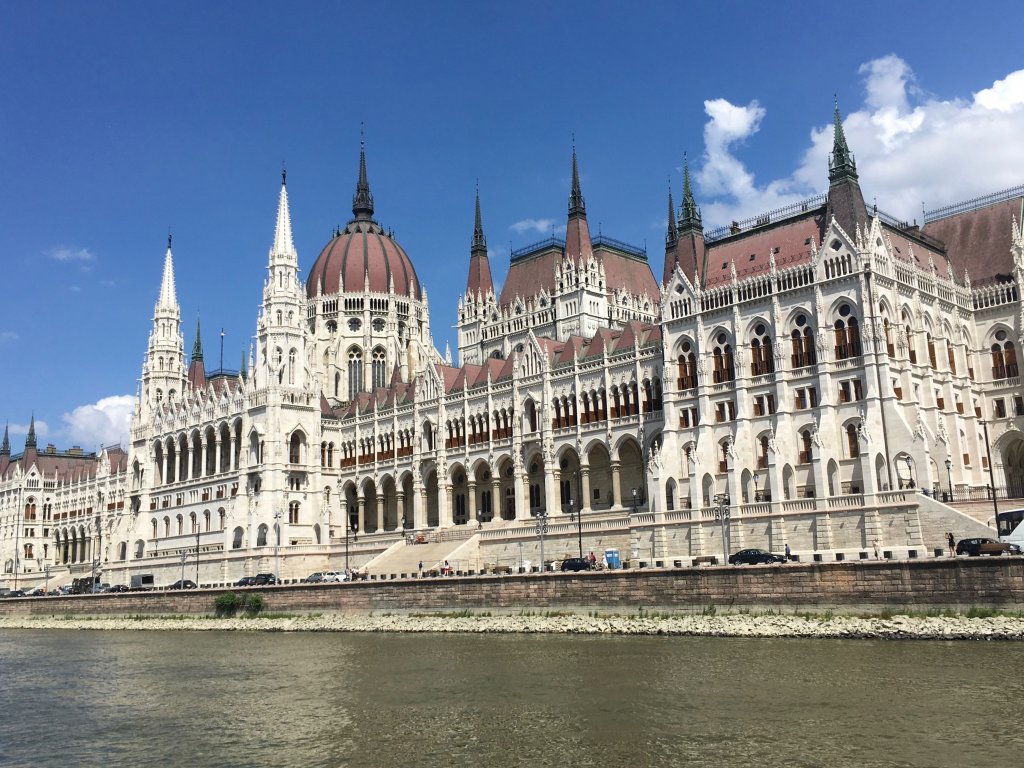 Indeed, Pest contains many buildings, some now transformed in hotels and businesses, that remind us of its great past. The boat takes us past the Great Market Hall, and the university, toward contemporary buildings, homes of modern companies. This short cruise is a beautiful and restful introduction to the geography and architecture of the city.

If you wish to visit the Parliament building, you should reserve your tour.

A colorful Zsolnay-tiled roof adorns the market hall, making it another emblematic building in Budapest. Inside, under cast-iron arches and a glass roof, diverse food stalls propose salamis and other sausages, fresh produce, Tokaj wines and of course the famous Hungarian peppers. Bright colors attract the eye from all directions. Unusual smells hold the promise of delicious foods and artfully prepared dishes, including goulash and meat-filled pancakes. 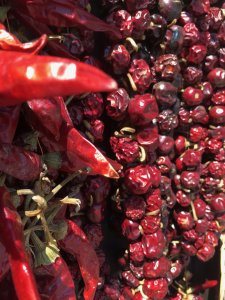 The second story is dedicated to small restaurants and souvenir shops. One easily loses track of time browsing through wood items and delicate lace-handicraft.

A bit of exercise won’t hurt after a hearty Hungarian meal or work up an appetite for dinner! In the evening, when the street-lights begin to turn on, the view is indeed spectacular and will reward any effort to walk up here.

A monumental Statue of Liberty, in a completely different interpretation than New York’s, stands on the highest hill of Budapest. Under her feet, the amazing panorama encompasses both Buda and Pest, and the meandering Danube. One captures the royal castle, the parliament, the many churches, the synagogue, and the bridges, all at once.

Like most European cities, Budapest had an important Jewish community before WWII. One of its most beautiful and powerful monuments is the Dohany Street Synagogue. In the summer, it is better to make a reservation to visit the synagogue, which offers fascinating guided tours in English and other languages. Built during the 19th century in a Moorish-Revival style, it is very distinctive because of its two onion domes. Layers of yellow and red bricks alternate along the facade. Inside, lavish decorations and ornate details abound. After visiting the interior of the synagogue, tourists are led through a garden to the small cemetery and memorial park. A metallic statue of a weeping-willow bears hundreds of names of victims of the Shoah engraved in its leaves. In the afternoon sun, it is compelling on many levels. While leading to a reflection on violence, genocide, and the absurdity of wars, this tree, glittering in the sunshine, also provides solace and hope.

Young folks come to Budapest to party. The Szecheny Baths aren’t the only location to enjoy oneself! The Ruin bars, in the old Jewish quarter, are the hippest in the city. While they may not serve the best quality drinks, they offer a vibrant scene. Many play loud electronic music in dark cellars and hidden backyards. Each one has a special atmosphere, sometimes artwork and second-hand furniture. And it seems that the party never stops!

Szimpla Kert opened in 2002 in an old factory. It is worth a visit at any time of the day. Shops, bars and restaurants line the sides of the alleys, while flea-markets sell any trinket you didn’t know existed. 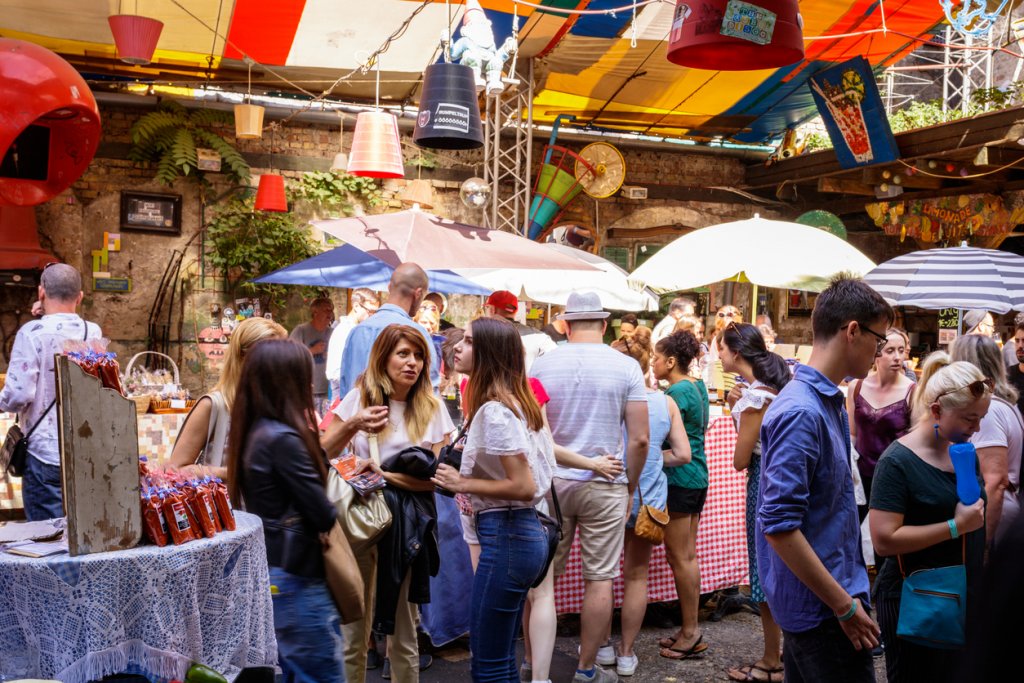 Sustainability is becoming important here too, and a farmers’ market proposes locally-grown fruits and vegetables, cheese and honey. Both dark and colorful, oppressive at times, this narrow street is a typical example of the alternative scene that Budapest wants to create. Budapest is also famous for its escape rooms, some are found in the same district as the Ruin Pubs.

Budapest has so many attractions and sights that it offers something for everyone. Old and new gracefully mix here and provide entertainment. Despite having been extremely damaged during WWII, it has been beautifully restored. Some of the grand buildings seem to have defied time and misfortune, while others still show signs of war, destruction and decay, even on the grand Andrassy Avenue. In addition to the vibrant nightlife, and restaurants, this beautiful capital offers a fascinating image of Central Europe and its culture. Budapest is a do not miss for the seasoned traveler.