Even nowadays, it is still possible to explore Slovenian wonders without too many crowds. While one encounters a few buses filled with tourists in the most popular places, there are nevertheless many picturesque towns and sites to enjoy peacefully during your Slovenia travel. Landscapes change drastically, from the lush mountains in the North to the balmy cities of Koper and Piran on the Adriatic Coast—so do the culture and the food, witnesses of the country’s tumultuous history.

The capital and largest city, Ljubljana, is full of charm, thanks to the Ljubljanica river flowing through it and the charming bridges gracing it. The most spectacular one is the Dragon Bridge, constructed out of reinforced concrete in 1901. The legend claims that, despite their fiery gazes that defy pedestrians to pass by, the four imposing verdigris dragons will wag their tails if a virgin crosses the bridge.

A powerful earthquake destroyed the area in 1895. New buildings, and the Dragon Bridge, were then erected in the Vienna Secession style; they mix harmoniously with the older Baroque structures. The entire city center looks cheerful, with the colorful facades, the swans gracefully swimming on the river and the lively shops. Because several streets are reserved to pedestrians, Slovenians come here to enjoy a leisurely stroll, stopping at restaurants and ice-cream parlors on Sunday afternoons. In Ljubljana, enjoying the simple pleasures of life is easily attainable. 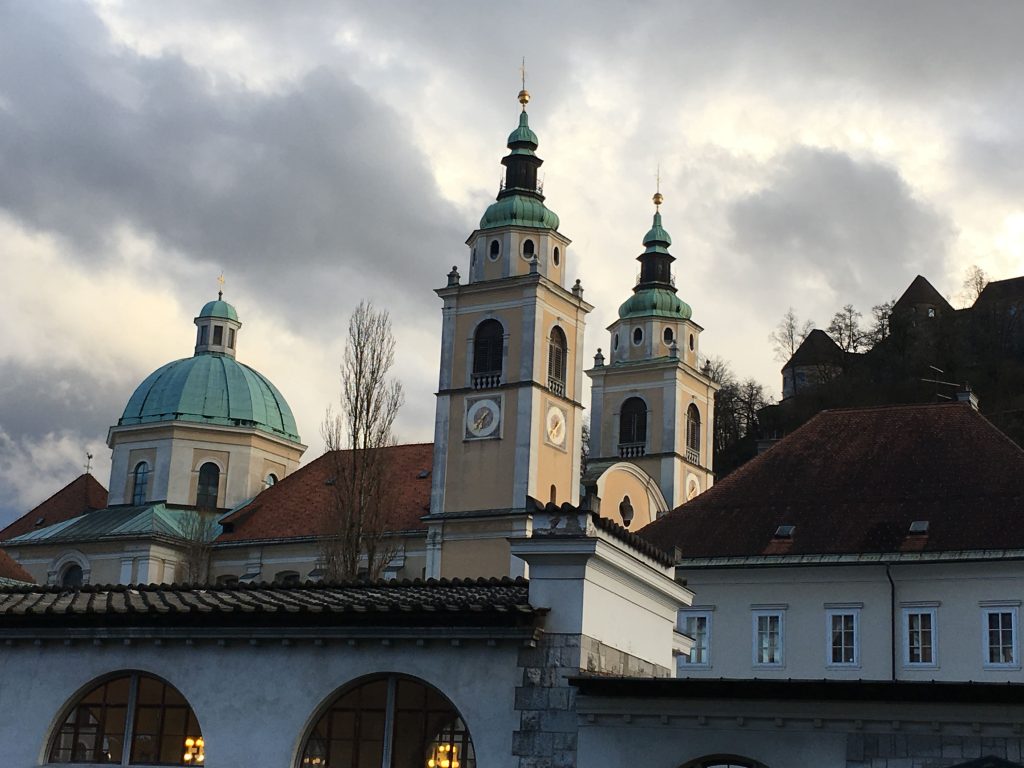 Brave the crowds for these two amazing places during your Slovenia travel:

Predjama castle is nestled in a green karst cliff, making it impregnable from any side. The entire fortress is damp and cold; rain water drips into exposed gutters to be collected into wells. It’s even worse in the torture chamber: dark and saturated with humidity, this is a nightmare come true. After being tortured for a while, the accused was taken to the room next door, where the lord rendered justice. Here he could confess to his crimes. The judge then convicted and sometimes sentenced the prisoner to death. Finally, the executioner only had to unlatch a door, opening to the emptiness of the cliff side and push the guilty person out. One scene at Eyrie Castle in Game of Thrones came to my mind in this particular room.

Visiting the magnificent caves at Skocjan is a must during your Slovenia travel. The “Silent Cave” is eerily beautiful. Several enormous stalagmites, aesthetically lit up, adorn the first room, while stalactites dangle delicately from the ceiling. Although these rock formations are impressive, we’ve all seen similar ones before. What comes next is truly unique to the Skocjan Caves.

The rest of the guided tour takes visitors through the “Murmuring Cave,” an immense underground canyon, dug many centuries ago by the river Reka. The river, still at work, runs powerfully through the canyon and generates a deafening noise. The huge room is mostly dark, and one can only make out the foam created by the rushing river, almost a hundred yards below the path. Here, I felt I was part of Frodo Baggins’ company, making my way under Middle Earth. One evidence comes to mind: humans are small and powerless against the forces of nature. Despite the sturdy fence, a clear sense of danger arises. There is almost a sense of relief when stepping outside of the cave, into the cheerful Reka Valley. Indeed, we’ve left the mineral world behind us, and we’re back into vegetation and open skies, a world familiar to us.

Less famous, perhaps less impressive, yet worth a detour during your Slovenia travel:

February is the time to drive away winter and welcome spring: Slovenians call this Carnival “Kurentovanje.” Its most striking figure is the Kurent. People, covered in sheep skins and wearing an impressive headdress of feathers or horns, carry wooden sticks decorated with hedgehog skins. Cow bells dangle and ring around their waist. They dance and run cheerfully through the town, in groups. Many other characters, such as bears, chickens, townspeople, participate in the parade.

One opportunity to see these impressive costumes is to visit the massive medieval fortress in Ptuj, now a museum. Besides explaining the history and culture of the area, it houses a magnificent collection of Kurentovanje costumes in the ancient stables. While on the castle’s promontory, don’t miss the breathtaking views of the city roofs and the surrounding countryside.

The tourist office in the town presents a video of Kurentovanje, which helps understand better the event.

Located near the Austrian border, Maribor has preserved some of its medieval heritage. Narrow cobbled streets run through the center of town, a maze leading to the river, the synagogue or small plazas. The pentagonal Water Tower used to be part of the walls protecting the city. Now, its silhouette quietly reflects in the river Drava. A 400-year-old grapevine, supposedly the oldest in the world, still grows on the facade of an old house across the street.

The colorful farmers’ market offers honey and local liquors in addition to seasonal fruits and vegetables. Most stalls are quite small, but produce is plentiful. The market is lively, with people greeting each other, and locals bartering with the sellers.

For traditional Slovenian grilled food: try Stari Grill, an old restaurant across the city hall in Maribor—street address: Glavni trg 5. The menu is small, with only three or four simple items with Slovenian names, and photos. Try Pleskavica with Cheese Filling, the house specialty, and Lepinjo with Cevapcici: they are simply delicious. Meat is cooked on charcoal, and portions are generous.

Ice-cream and cakes in Ljubljana: Cacao is a dessert shop in the center of Ljubljana offering decadent cakes and succulent ice-creams. What a luxury to savor these sweets by the river, while admiring the surrounding Belle-Epoque buildings!

Wedged between its touristy neighbors, Croatia and Italy, quiet Slovenia has many treasures to offer. Quaint villages and towns beautifully preserve Slovenian culture. They charm visitors with ancient traditions, castles and monuments dating from the Roman times as in Ptuj, to the Vienna Secession movement in Ljubljana. Slovenia is indeed an endearing country, able to defend its heritage, yet modern and welcoming. Enjoy it now before the rest of the world discovers it!