Mont Saint-Michel: An Island Between Sky and Sea - Prime Women | An Online Magazine

Mont Saint-Michel: An Island Between Sky and Sea

Growing up in the Mont Saint-Michel Bay, I could feel this great monument’s presence almost everyday. I saw it from my grandparents’ house and from my high school classroom. When I was going sailing, it stood there, an obvious landmark in the distance. I knew the direction toward which I had to steer the boat. “Cap sur le Mont Saint-Michel,” used to command my father. No explanation was necessary; just keep your eyes on the tiny triangle to the southeast, and stay on course.

In the Pilgrims’ Footsteps 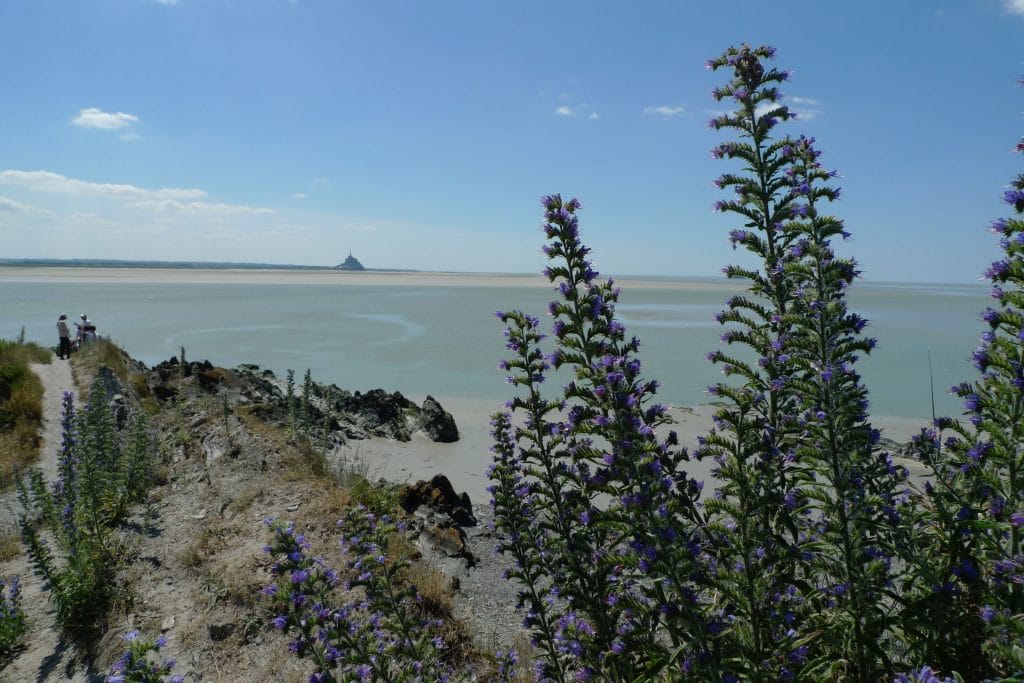 One of my favorite ways to experience the Mont Saint-Michel is crossing the Bay at low tide. In the old days, devout Catholics came from far away for a pilgrimage to the church at the top of the island. Despite their ignorance of local weather and sea movements, they managed to cross the Bay in order the reach their destination, the abbey on the rock.

They only knew that they had to make it across the Bay before the tide came rushing back. They also had to keep away from the numerous quicksands scattered in the area. After avoiding all these dangers, they could finally climb to the magnificent Flamboyant-Gothic abbey.

The esplanade in front of the church rises high above the Bay. Light and delicate, the granite buildings soar to the sky. Whether under grey skies and a cool wind, or touched by the warm rays of the sun, one forgets the hardships of life and the difficulties encountered to reach this spot. Nature and architecture blend their grace and splendor here, strengthening the traveler. Sand interlacing with water and sky affirm the uniqueness of the landscape.

Nowadays, during the summer months, tour guides take large groups across the Bay. Of course, I cannot help but be a bit nostalgic. I remember the many times I followed an old fisherman and his dog to the Mont, leading a group of fewer than ten people. Yet, I fully enjoy this new experience. Despite the larger crowds of travelers, the Bay doesn’t change.

For centuries, it has been both welcoming and threatening at the same time. Tour guides lead hikers according to the tidal time-tables, from the Bec d’Andaine or Saint-Léonard, to the Mont Saint-Michel, 4 miles away. They have experience on where to cross the two rivers, and skillfully explain the flora and fauna of the area. To the great amusement of children and adults alike, they also lead groups to quicksand areas, explain the phenomenon and make sure that everyone comes back home safely. 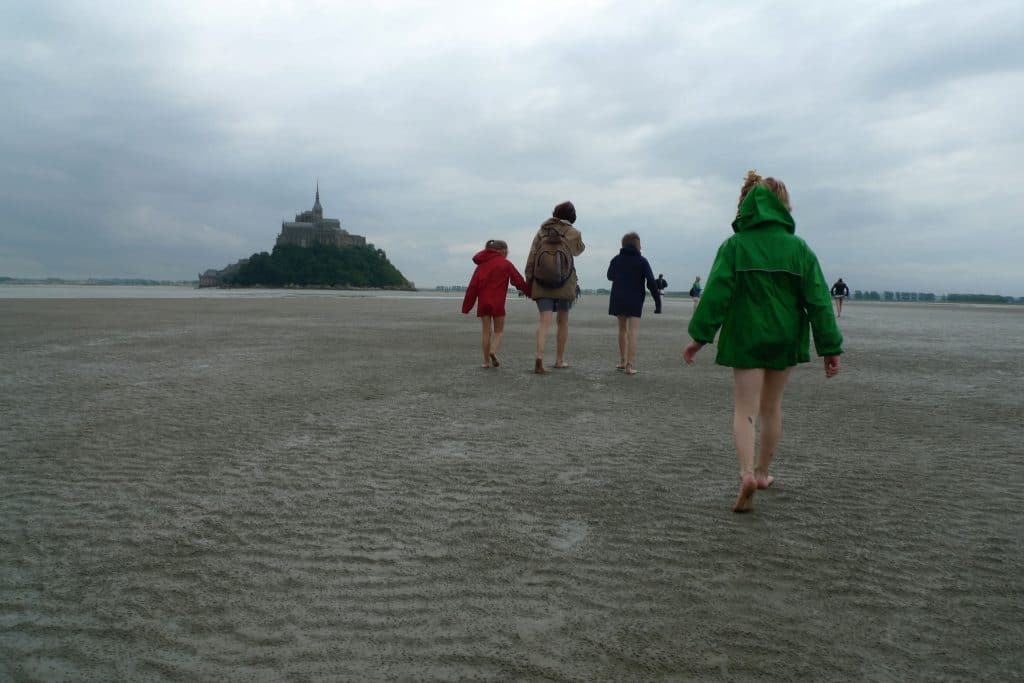 If you speak French and wish for a more targeted experience, naturalist Romain Pilon offers a wide range of outings on the bay. His family has lived in the area for generations and he is extremely knowledgeable and passionate.

In addition, several riding farms both in Brittany and Normandy offer horse trekking in the Bay, lasting a few hours to a few days.

A Few Words of Caution

Most importantly, don’t try this alone! The Bay can be dangerous. The tide comes back very quickly and no one can out run it.

The entire walking experience lasts at least 4 to 5 hours. You should expect to walk barefoot to and from the Mont Saint-Michel. On the positive side, your feet will be extremely soft at the end of the walk! Wear shorts as the two rivers you will have to cross might be quite high depending on the season and rainfall. Carry water and wear sunscreen even under cloudy skies.

Twice a day, the water retreats for miles into the ocean. Tidal levels in the Mont Saint-Michel Bay are the highest in continental Europe. When the tide is low, it is time for hikers to make their way through the Bay. On the other side, 4 miles away, lies the Mont Saint-Michel. 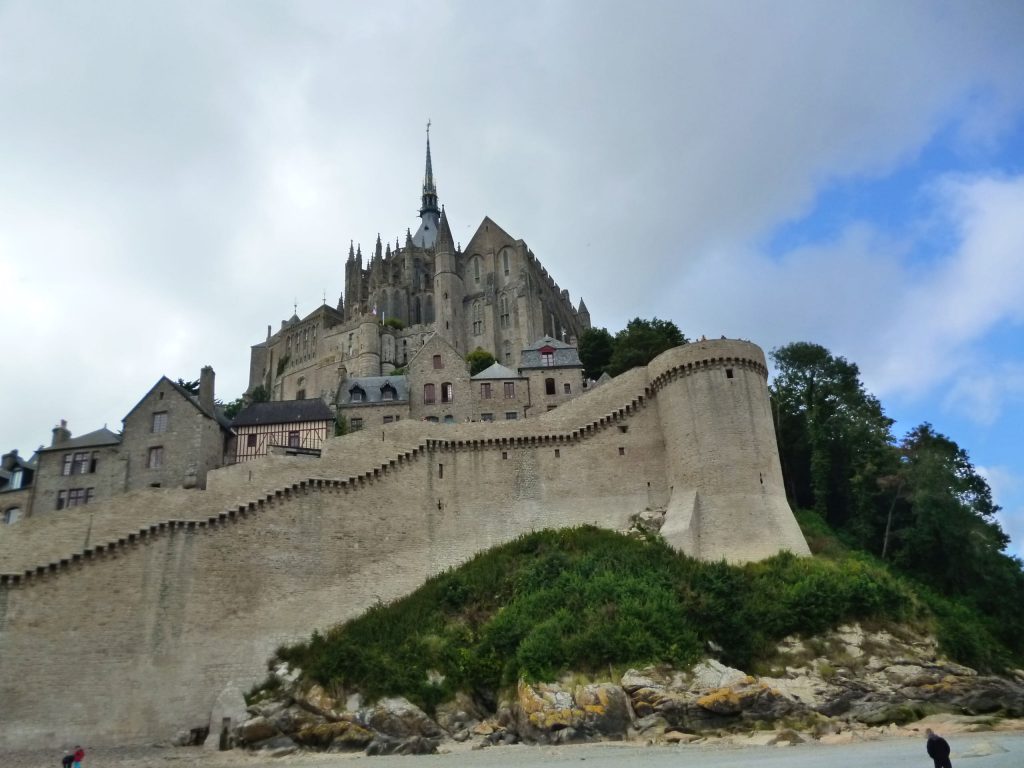 It seems close, yet it takes about an hour and a half to reach the large granite walls encircling in. The adventure takes us near the other island, Tombelaine, nowadays only inhabited by sea birds. During the summer months, many birds of protected species nest here.

Under our feet, the sand isn’t always flat. At times, it seems to ripple like waves. In places, little sand mounts created by sand worms subtly change the appearance of the ground. Farther out, sand is mixed with grey mudflats, making it slippery. The soft and slimy mud slips between the toes. Children love this feeling and slide on the mud flats, splashing anyone unfortunate enough to be walking too close to them.

The traveler arriving from the North has an unexpected view, only attainable when crossing the Bay. From this side, the village is invisible. The abbey stands high, strong and impregnable, above tall trees. It appears wild and alone, lost in nature. This feeling passes when walking around the base of the Mont Saint-Michel, and stepping back into civilization.

A Quick Visit of the Mont Saint-Michel

Because of the tidal constraints, tourists wishing to walk back to the mainland only have one hour to picnic, rest and enjoy the views. Evidently, this isn’t enough time to visit the village and climb up to the abbey. Because the Mont Saint-Michel is a UNESCO World Heritage Site, millions of tourists flock here all year around. After the quiet, and at times reflective, hike through the Bay, the revolting shops that line the bottom of the main street are almost unbearable to look at. Sometimes, I don’t even pass through the medieval towers; I prefer to stay near the little chapel, awaiting the guide to lead the way back to the mainland.

The Legend of Saint Aubert, Bishop of Avranches

Just before arriving at the village gate, the tiny Saint-Aubert Chapel welcomes the traveler. According to the legend, Saint Aubert, unwillingly at first, started the construction of the abbey at the top of the island. Indeed, Archangel Saint Michael had to visit him three times in his dreams, even drilling his finger into Aubert’s skull, before the poor bishop finally agreed to the task. This skull is exhibited in the Saint-Gervais church in nearby Avranches, a proof that Saint Michael means his instructions to be followed in a timely manner!

One of the village’s most famous landmarks might be worth braving the crowds. A few yards after the gated entrance of the village stands one of the most well-known restaurants of the region.

Through the windows at La Mère Poulard, kitchen help rhythmically beat the eggs in copper bowls, or set omelettes to cook on the open fire. This antiquated manner of beating eggs to prepare an omelette is truly memorable. The result is entirely different from homemade omelettes or any omelette ordered in another restaurant.

Today as in past centuries, there are naturally several manners to approach the Mont Saint-Michel, to understand it and to feel its importance in the region. To better appreciate the island, its history and its biological, geological and ecological impact on the environment and the region, one must spend time here.

What an experience to watch the water rush back from the West, “at the speed of a galloping horse” and surround the Mont! This is especially visible during the equinox tides. The Mont Saint-Michel has so many different sides that tourists and locals alike discover new aspects, and enjoy fully its majesty every time they visit.