Between Fiction and Reality, Montmartre - Prime Women | An Online Magazine

Between Fiction and Reality, Montmartre 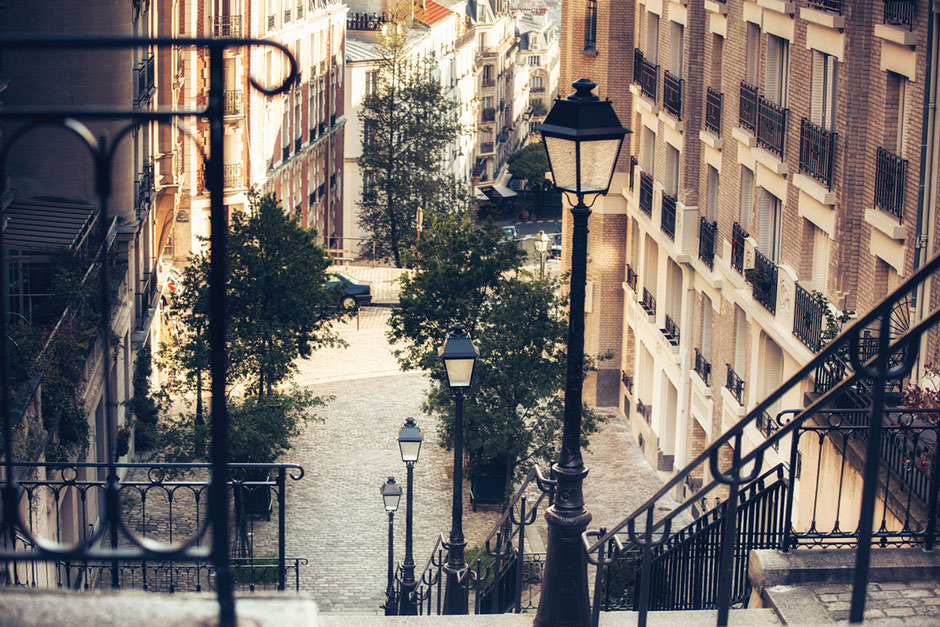 For many, Montmartre is the loveliest village in Paris. Artists have immortalized it in hundreds of paintings, songs and movies for decades. Therefore, everyone has a particular image of this neighborhood in their imagination. Montmartre is ever changing with the passing months, colors declining from the gold and red autumn leaves to the delicate purple wisterias of the spring. Year around, there is always some new detail to observe, some new vista to enjoy.

One sees the imposing white façade of the Sacré-Coeur Basilica from almost everywhere in Paris. And the view from its forecourt is magnificent, embracing the tall bell towers of Notre-Dame, the boats slowly gliding on the Seine, the majestic roofs of the Opera Garnier and the Grand Palais, and, of course, the Eiffel Tower standing in the background.

Yet, around this grandiose church, narrow meandering streets, private alleys, courtyards, staircases and small squares give a distinct flavor to this neighborhood.

Jean-Pierre Jeunet captures the essence of Montmartre perfectly in the movie Amélie. The characters intimately know their neighbors and coworkers; sometimes they even spy on each other, just like in a small village. In addition, the director and his team joyously present their own romanticized understanding of the streets and atmosphere of Montmartre. One of my favorite clips of this movie shows Amélie describing the shops, traders and bystanders to the blind beggar. There isn’t any tourist on the street, just inhabitants going about their daily business, smiling and enjoying life.

Fans of Amélie, rejoice! Until July 31st, the Halle Saint-Pierre (see below) presents iconic objects from the movie in the exhibition Caro/Jeunet.

Avoiding the crowds on a summer day is impossible, except for the early risers, yet discovering the “true” Montmartre is attainable, by leaving the Sacré-Coeur and the Place du Tertre behind.

Montmartre of the Painters and Gastronomes

At the top of the Butte

Many landmarks depicted by impressionist painters and their followers are still visible, almost untouched by time. To this day, the Lapin Agile remains a cabaret, where traditional French chansonniers perform live, without microphone, in a warm and relaxed ambiance. On its pink façade, the funny painting of a rabbit running away amuses everyone. He’s just escaped from a cooking dish while holding a bottle of wine: this is truly the Lapin Agile!

At the Bateau-Lavoir, however, there is no publicity; an austere front leads to private courtyards and art studios. It’s impossible to enter the complex without a proper introduction. Across from the Bateau-Lavoir, contemporary painters still erect their easels to capture the spirit of the neighborhood. Nearby, under the horse chestnut trees, water slowly trickles in a Fontaine Wallace. Children play on the square while dessert lovers hurry to the beautiful Pâtisserie Gilles Marchal, where tasty sweets await.

Out of the 12 windmills that dotted the hill of Montmartre in the late 19th century, only these two remain, located in the same block. The tall and dark silhouette of the Moulin Radet seems to protect the buildings nestled at its feet. A few lucky Montmartrois have keys to the private gardens and pétanque court beneath this famous mill.

Nearby, the restaurant Moulin de la Galette welcomes diners in search of authentic French cuisine. The Moulin Blute-Fin, a quiet dining companion, stands above it. What a luxurious experience to taste delicious dishes in such a mythical location! 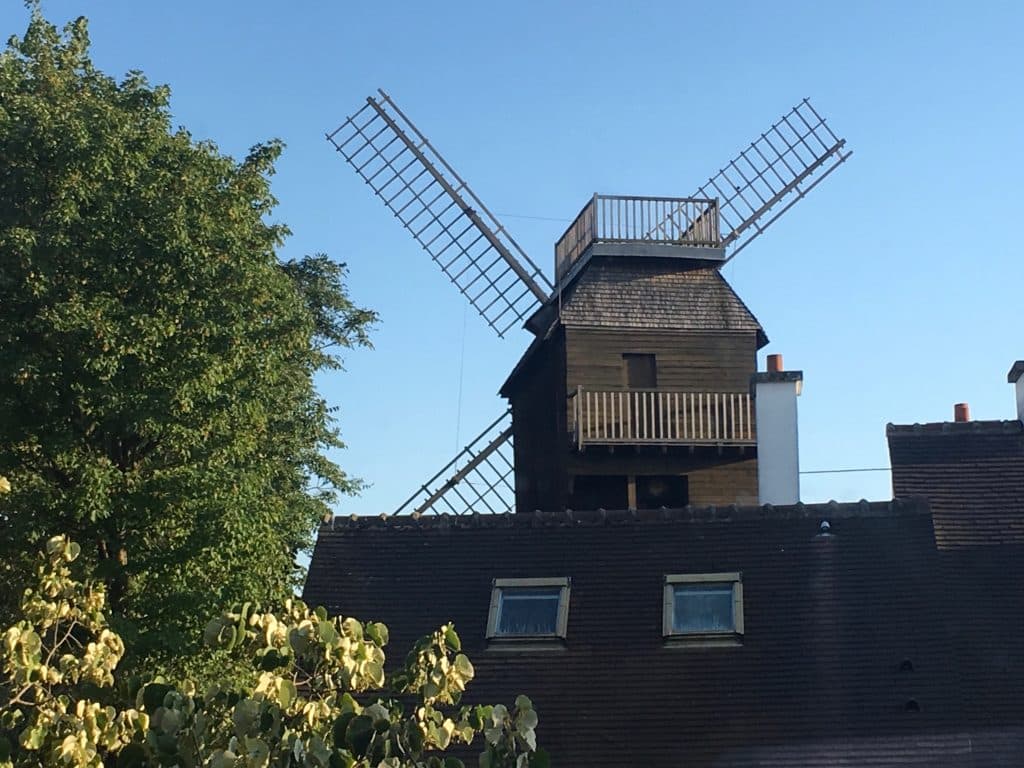 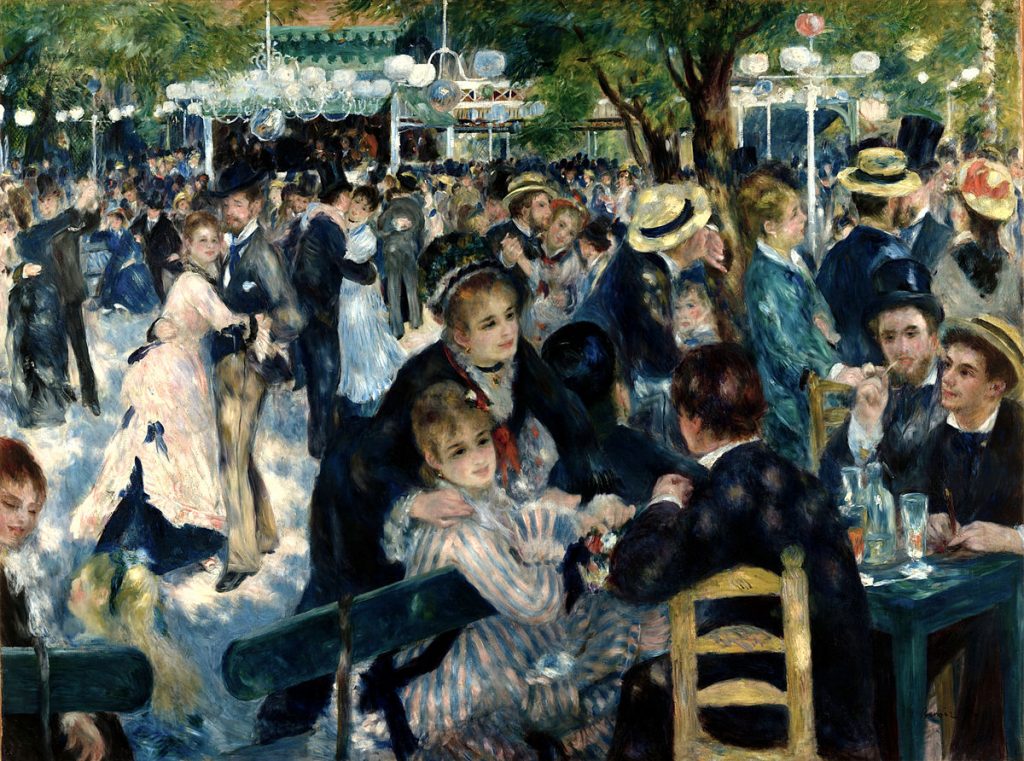 Tired and thirsty? The Halle Saint-Pierre, home to Outsider Art galleries and a bookstore dedicated to art, also contains a coffee shop. The Baltard-Style hall, renovated into a modern space, has nevertheless preserved its typical features, most notably the steel structure. With so much sunlight penetrating through the glass wall, it’s almost like having a drink outside. Once seated in this delightfully muted location with a soup and a pie, along with a good book, it is difficult to leave.

The local museum is located in one of the many private compounds of the neighborhood. Nearby, another such small street, still inhabited, is open to the public: the Villa Léandre is a cobbled cul-de-sac, adorned with myriads of flowers; it is so secluded that there is always a cat or two enjoying the sunshine.

The Montmartre Museum beautifully preserves artwork in the context of pre-WWII Montmartre. Yet, one of its main attractions is the studio where mother and son Suzanne Valadon and Maurice Utrillo, both painters, worked for a few years. The colors have faded on the walls, and the paint is dried on the artist’s palette. But light still flows abundantly into this atelier through the large windows; the artists’ materials still lay here, only awaiting their return.

The large Renoir Gardens form an important part of the museum complex. They provide a quiet, green oasis among the tall stone buildings. From the last garden, the view on the northern cityscape is breathtaking. Just next to it, the minuscule Montmartre vineyard grows peacefully in the middle of Paris, awaiting its celebration at the Fête des Vendanges every October. 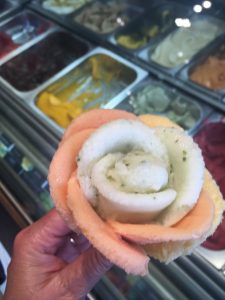 Montmartre has an Amorino location, 39 rue des Abbesses. You’ll have to brave the hordes of tourists in order to get your flower shaped ice-cream: fancy flavors with a macaron on top! Isn’t it worth the wait to enjoy the most stylish ice-cream in the French capital?

Paris is one of the most visited cities in the world. Many tourists come here to see its grand monuments, to shop, and to eat delicious croissants for breakfast. But Paris has so much more to offer. A few neighborhoods, like Montmartre, have preserved their authenticity. Anyone willing to get lost in their narrow streets is rewarded by surprising landmarks. Such escapades are really worth the effort: in fact, little treasures are waiting to be discovered around every corner.