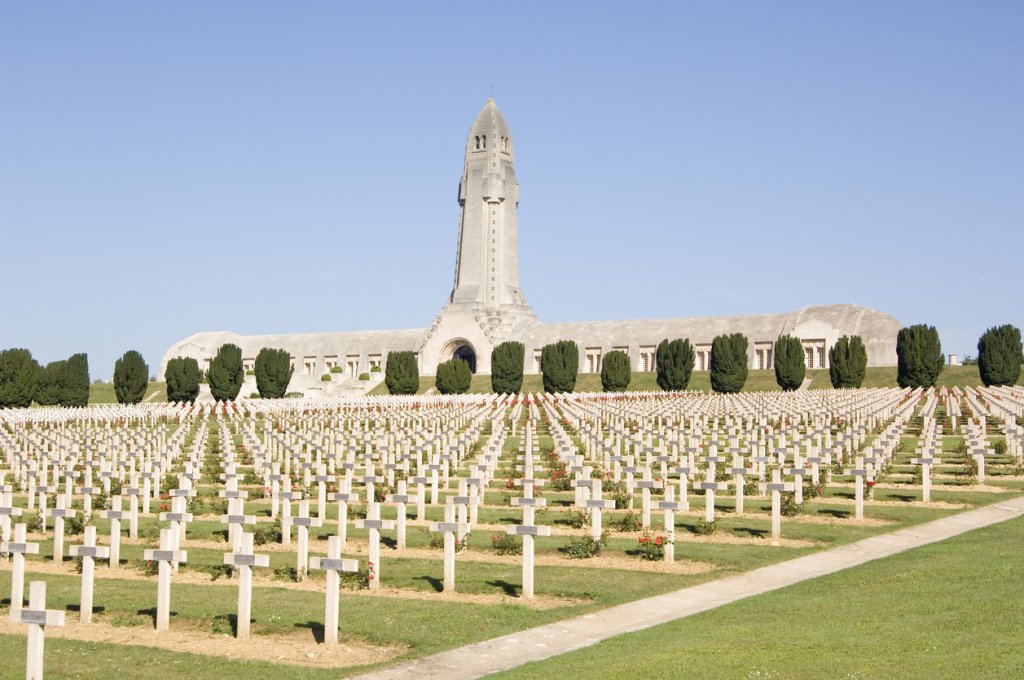 A Family’s Pilgrimage to WWI Sites

Several months ago, my father expressed his wishes to visit a few WWI sites, most notably Verdun where his father had served as an artillery gunman. My sister and I decided to accompany our parents and bring our children along during the summer vacation. Three generations, aged 11 to 85, traveled to Northern France, searching for a better understanding of the first World War, its battles, the destruction and its consequences. Scarred by his experiences, my grandfather had never talked to his sons about his life in the trenches. Therefore, what my father knows about the war, he learned at school and from books.

Looking for Clues in the Countryside

A century ago, there were no green pastures, no quiet forested areas on this plateau. Instead, a muddy, desolate landscape stretched all the way to the horizon, lined here and there with barbed wires. Today, the scenery is deceivingly serene. Large open fields and small villages dot the countryside. It’s lunchtime when we arrive in the area. Why not stop and have a picnic near the ruins of an old Cistercian abbey? A large forest of century-old beech and oak-trees surrounds the ancient buildings. They border an orchard of pear and apple-trees, by a winding stream. The location is romantic, even idyllic. We’re sharing baguette sandwiches, filled with cold charcuterie and Camembert, while the children run and play happily around us. 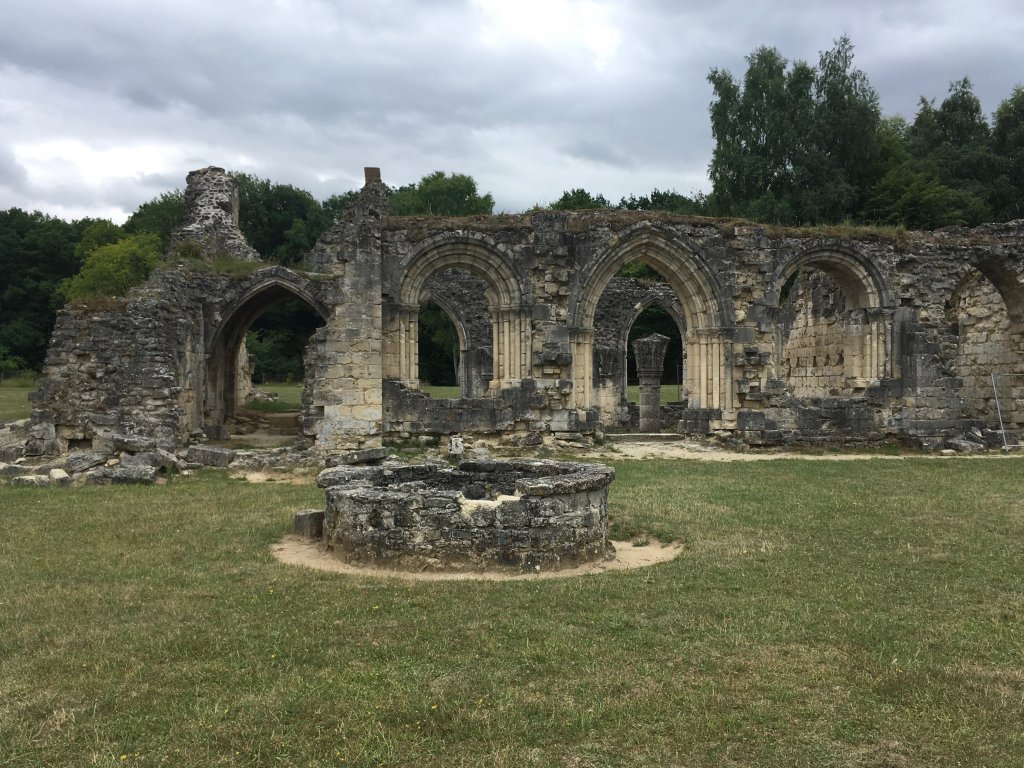 However, as soon as we read the information panels, we understand that we have stepped into WWI history. Nowadays, the Vauclair abbey is only a pile of ruins, with a few remaining walls. We could be standing near any other abbey in France, sold during the 1789 Revolution and later used as a quarry. At Vauclair though, the destructions lasted much longer, the final ones happened in the fall of 1917 when the French army lead an offensive. More than 50,000 men died and not much terrain was gained.

The Chemin des Dames, in the Aisne département (county), is a road named after eighteenth-century princesses, who traveled on it, before reaching nearby Château de la Bôve. More famously, it was the theater of several major battles during WWI. At first glance, there are no traces of the war left in the landscape. And yet…

For the last century, the départements of Aisne and Somme have been amongst the most wooded in France. Birds chirp in the foliage overhead; one can easily imagine rabbits, foxes and badgers running around at night. But before 1914, farmers used to labor all over this land. The woods we see are relatively new, a century old, to be exact. The Red Zone is everywhere around us. These lands, too damaged to be used by humans, reverted to their natural state. The French government didn’t allow many villages to be rebuilt. Some areas were deemed “impossible for humans to live in”, because they were filled with unexploded shells, rusted ammunition and chemical pollution. While most have been decontaminated, a few are still forbidden to the public; there plants are still dying from the chemical weapons used during WWI.

Craonne, A Village Erased from the Map

Near the Plateau de Californie, the remaining villagers of Craonne had to leave their homes behind and move away. They created a new Craonne, a few miles down the road. Nowadays, the area is an arboretum, safe for hiking and enjoying nature. 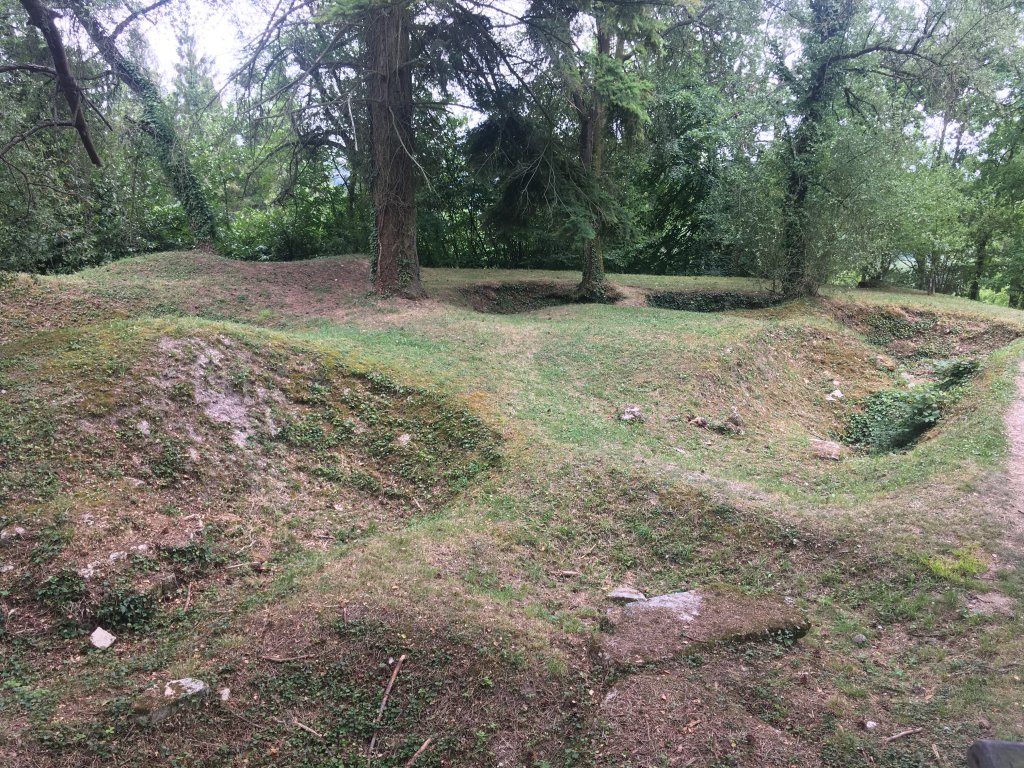 Nevertheless, First World War destructions are still clearly visible. Great shell holes carve the hillside, where trees managed to take root in the craters and trenches. Here and there in the ferns, one can still make out a few remnants of houses; markers indicate long-gone streets. In Craonne, plants have been stronger than the poison filling the ground, and life was able to reclaim the land. Indeed, despite the obvious destructions, it is difficult to grasp the horror that must have happened here. Life goes on, a reassuring thought. 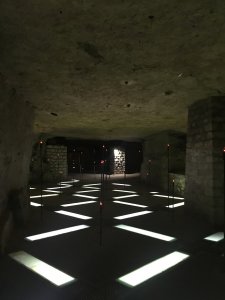 Since the Middle Ages, builders have used stones from this quarry in many monuments, including the Vauclair Abbey, thus creating enormous tunnels and caves. During the Great War, both the French and the German armies used this location, which allowed them to gain a commanding view of the valley and surrounding territories. It was also almost impossible to take.

Visiting the Caverne du Dragon is, for all of us, an extremely powerful experience. Our tour guide shares numerous insights and compelling stories that help us understand how difficult life underground was. Despite the silence, we have to imagine artillery pounding over us, making the walls and the roof of the cave tremble. How could men feel safe here, in the cold, the humidity and the dark? Was it easier to live here, or outside, in the trenches? 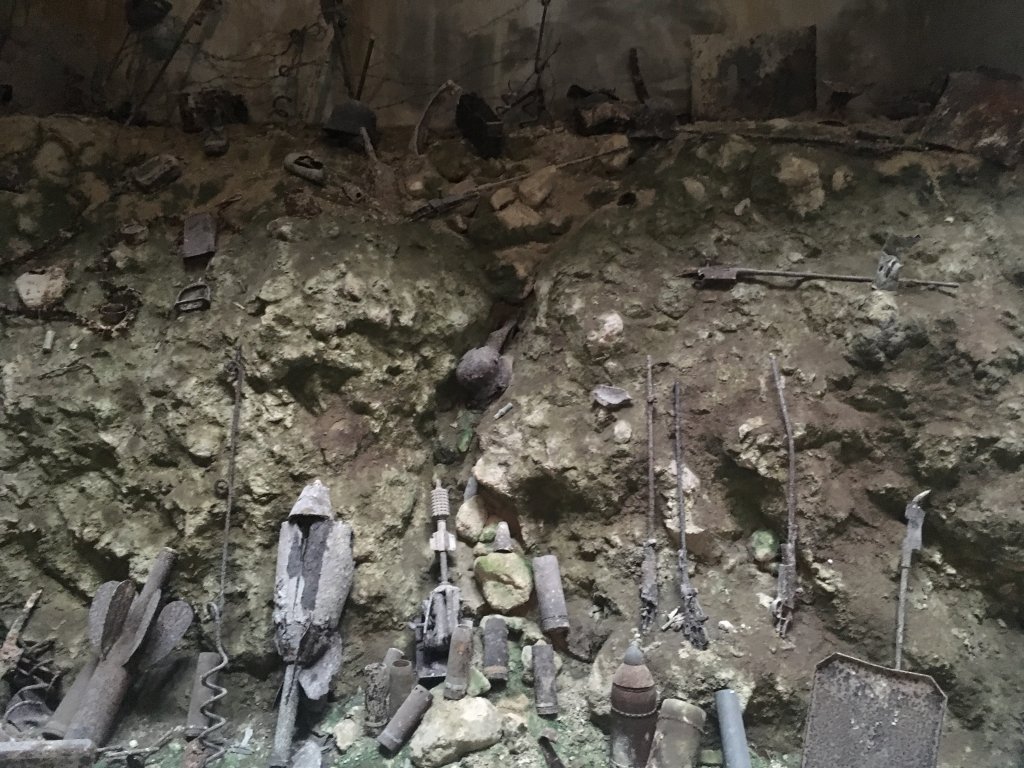 The Battle of Verdun is one of the most famous military battles, an iconic stereotype of the trench warfare. Each army gained a few hundreds of yards, then had to retreat again, under pressure from the other side. What story could the location tell us, a hundred years later?

Both the French and the German armies used this nineteenth-century fortress overlooking the town of Verdun. Despite heavy shelling by the French in the fall of 1916, the fort remained largely undamaged. Walking through the galleries, we forget whether we are under or above ground. It is as cold here as in the Caverne du Dragon, and there is no natural light. We progress slowly in the maze of dark tunnels, up and down rusted ladders. Everyone seems to be speaking in low voices, impressed by the stillness of the fortress, and the dreadful events that happened here. Now and then, we stop to read stories about life in the fort during the Great War, each one more terrifying than the last.

Finally heading out in the sunshine, we can gratefully breathe a sigh of relief. From the grassy roof of the fortress, endless craters are plainly visible, in every direction. Nowadays, vegetation covers them of course, yet, rusted wires and rods still poke through the dirt. 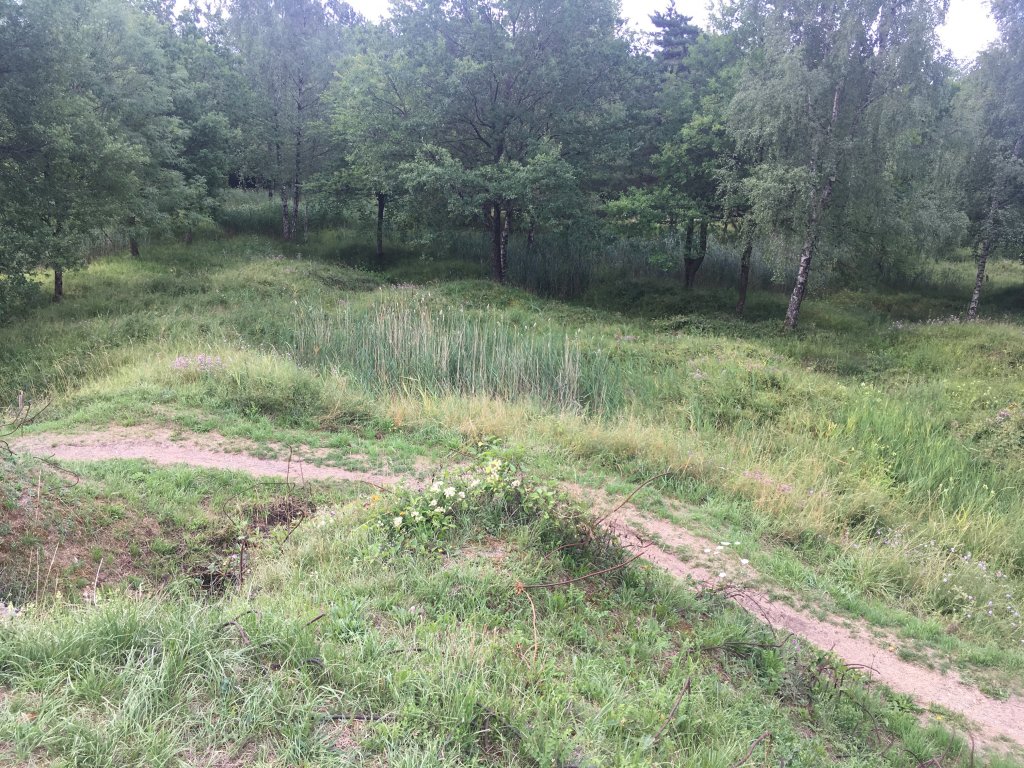 Ossuary and Cemetery at Douaumont

Almost white, a long horizontal structure, with a heavy belfry in the middle, rises in the countryside. This is a memorial to the soldiers fallen at Verdun, inaugurated in 1929. For some, it resembles a bombshell, for others a sword planted in the ground all the way to the pommel. 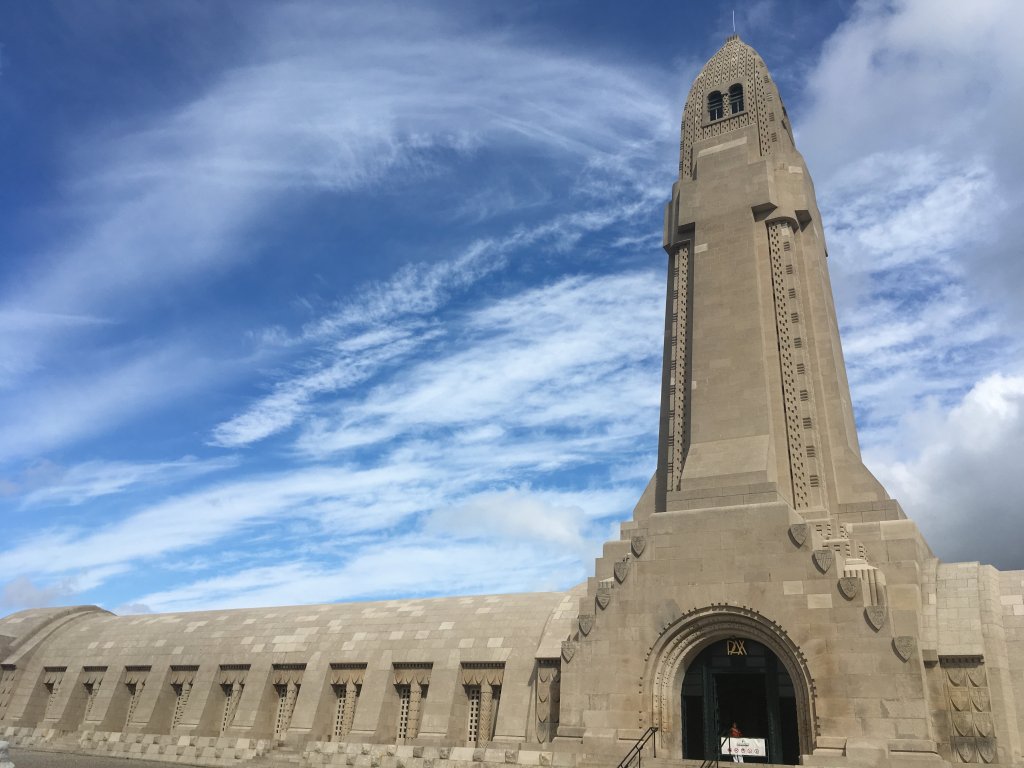 Names and coats-of-arm of cities are carved at regular intervals on the façade. Despite its tower, the large memorial is stocky. It seems deeply buried in the ground, unmovable and strong. The entrance, located at the bottom of the tower, is large, almost cavernous. Inside the monument, red stained-glass windows light the barrel-shaped corridor, symbolizing sacrifice. The heavy rounded arches reinforce the feeling of strength and unease. The small adjoining chapel is also dark and oppressive.

The remains of more than 130,000 unknown French and German soldiers, fallen on the Verdun battlefield, are inside the ossuary, below our feet. Their bones and skulls are distinguishable from outside, through small windows. This place isn’t beautiful but imposing. Its simplicity urges one to reflect on the horrors of war.

The cemetery in front of the memorial is the largest French military cemetery for WWI, with more than 16,000 graves. White grave markers, for the Christian and Muslim soldiers, endlessly line the small hill in regular, monotonous patterns. On either side of the cemetery, monuments to Jewish and Muslim soldiers commemorate their sacrifice.

Spending two days in the Verdun area helped everyone in our little group to gain a better understanding of the devastation that occurred here during the First World War. Perhaps most shocking was the realization that so much land was destroyed and rendered uninhabitable for humans that entire villages had to be condemned and left behind. Arsenic and other chemicals polluted some lands so much that nothing could grow there for decades. Year after year, bomb disposal experts carefully remove unexploded shells from fields.

Yet, life is stronger: plants and trees have taken over in most places and animals live in the woods. Now sign of reconciliation and hope, the Douaumont Ossuary has become one of the symbols of French-German friendship. Ceremonies here are regularly attended by European leaders, trying to build a better and safer future.