Valencia lies about 3 hours south of Barcelona on the Mediterranean Coast. It is the perfect place to appreciate the slow Spanish pace, appetizing dishes, loud fireworks and magnificent architecture. Many diverse activities await: biking to the Cabanyal neighborhood and the beach, shopping, visiting the Ceramics Museum at the Palace Marqués de Dos Aguas, or strolling in the Gardens of the Turia riverbed.

Paella is of course Valencia’s most typical dish. As a matter of fact, rice fields still surround the city, most notably in the direction of the Mediterranean Sea. Paella is still traditionally cooked on open-fires in large shallow dishes. Spaniards often eat it at home, therefore finding an authentic arrocería that doesn’t cater just to tourists can be a little tricky.

Nevertheless, Duna, on the beach at El Saler, is a perfect location. The restaurant has a wide patio overlooking the sand and waves. Waiters bring the paella dishes directly to the tables. Diners scrape out generous portions of rice, meat, fish and vegetables. We ordered side dishes of mussels, grilled octopus, grilled artichokes and fresh tomatoes as appetizers. Our appetite was therefore sharpened for a paella valenciana, with chicken, rabbit and small snails and a vegetarian paella. Delicious seafood was available in every restaurant we tried during our trip. Choosing between grilled octopus, crawfish and gigantic shrimp was therefore a challenge. Fortunately, when ordering different types of tapas, one can try many delicacies and even experiment with unfamiliar specialties!

Chocolatería El Valor sells delicious churros, hot and crisp, ready to be dipped in chocolate sauce. Dilemma of the day: choosing between several chocolate sauces: warm or cold, white or dark, thick or not. Even after several dippings, it was difficult to decide!

Both refreshing and sweet, sangria is the perfect drink accompanying these dishes during a warm day. Bars and restaurants actually serve it everywhere in Valencia and in the nearby beach towns. They usually add club soda, making this cocktail light and flattering. Salud! 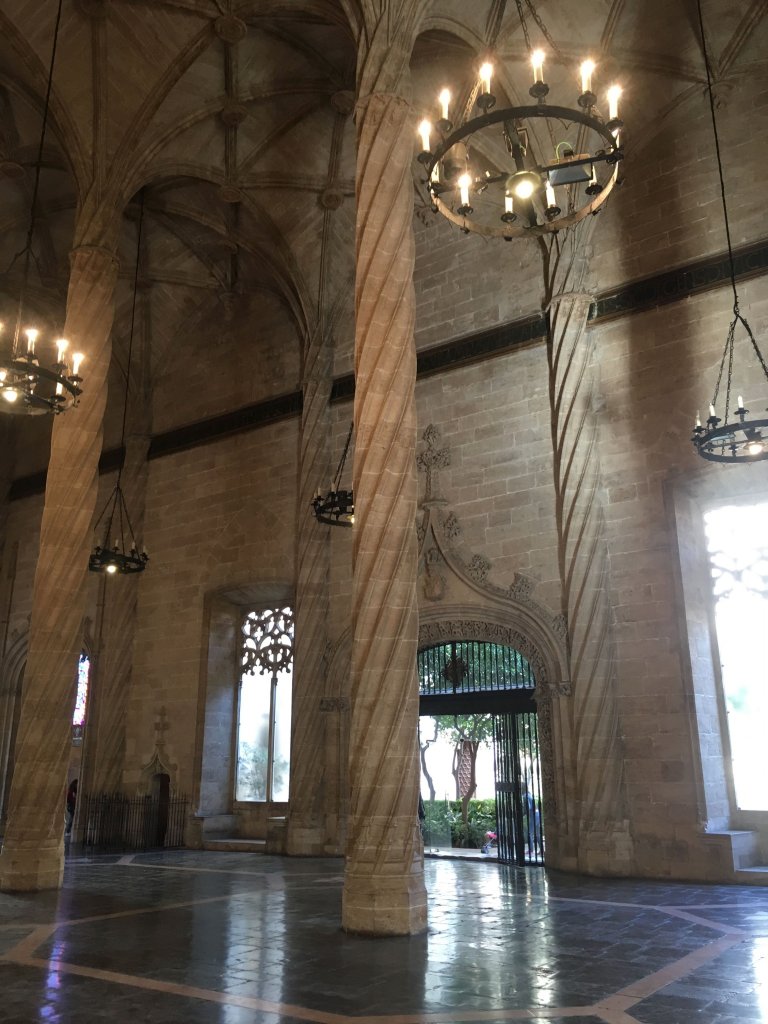 Valencia has been a major city since its foundation by the Romans. However, its importance grew due to the silk trade. In the late Middle Ages, silk came to Europe via Africa and Spain, thus making Valencia the perfect trading post. Neither the building’s Gothic exterior nor the courtyard planted with citrus trees prepare tourists for the majestic rooms at the Silk Exchange.

Around the delicately carved doorway to the hall, enigmatic or amusing details catch the eye. Inside, tall twisting columns grace the large and imposing hall. Its emptiness adds to its magnificence, yet making it difficult to imagine the busy atmosphere of the Silk Exchange during the late Middle Ages and Renaissance. Even if this building is relatively small, its grandeur and opulence attest that Valencia used to be rich and powerful.

Valencia as a Holy City

The treasure at Valencia Cathedral contains the Holy Chalice. The Vatican recognizes this red agate cup as the one used by Jesus Christ during the Last Supper. While likely not the original cup from 2000 years ago, it is well worth the entrance fee, especially when considering that you will also see the mummified left arm of Saint Vincent of Saragossa.

3. The City of Arts and Sciences

Native architect Santiago Calatrava designed many of the buildings at the City of Arts and Sciences, which opened between 1998 and 2009. Located in the empty Turia riverbed, delicate yet powerful, they soar toward the blue sky. The buildings are almost shockingly white, in contrast with the surrounding green trees and grassy areas. They reflect in shallow blue pools. 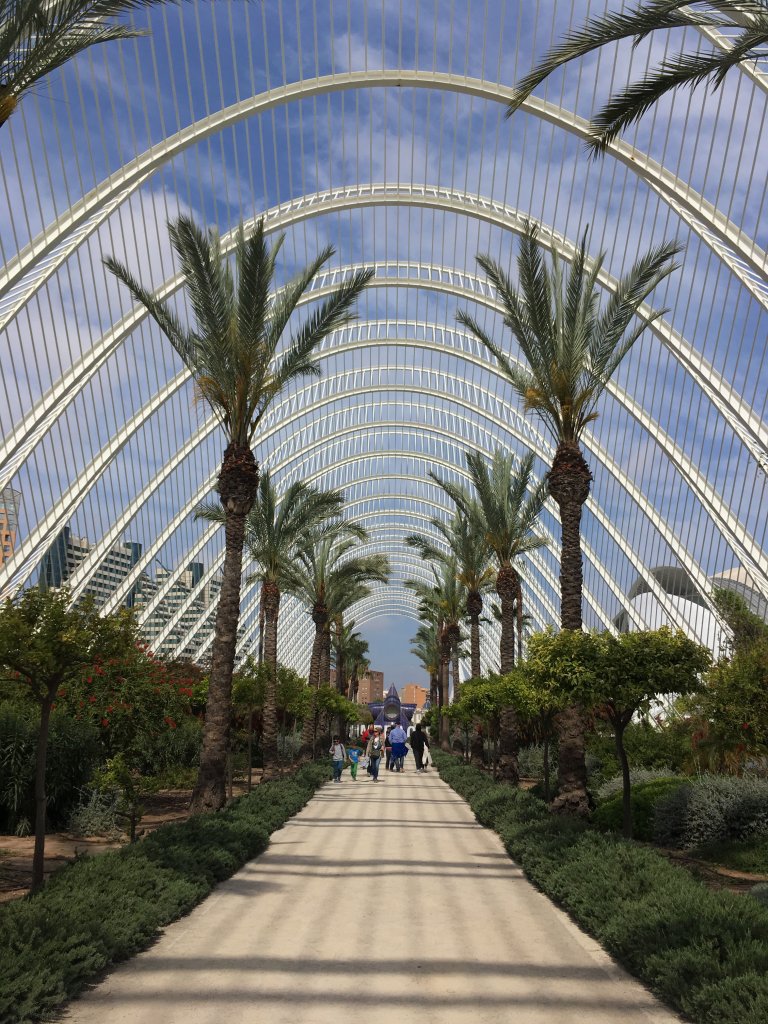 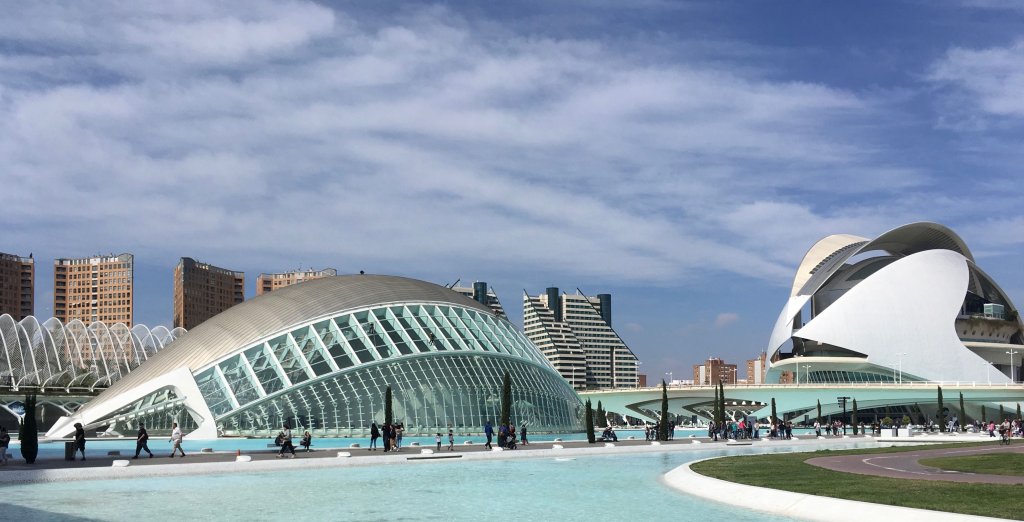 Resembling gigantic shells or enormous whale skeletons, they are all different yet echo each other. This area has quickly become a meeting point for locals and tourists alike. Indeed, these attractive buildings host concert and sport venues, the aquarium, suspended gardens and the science museum.

4. Shop at the Central Market 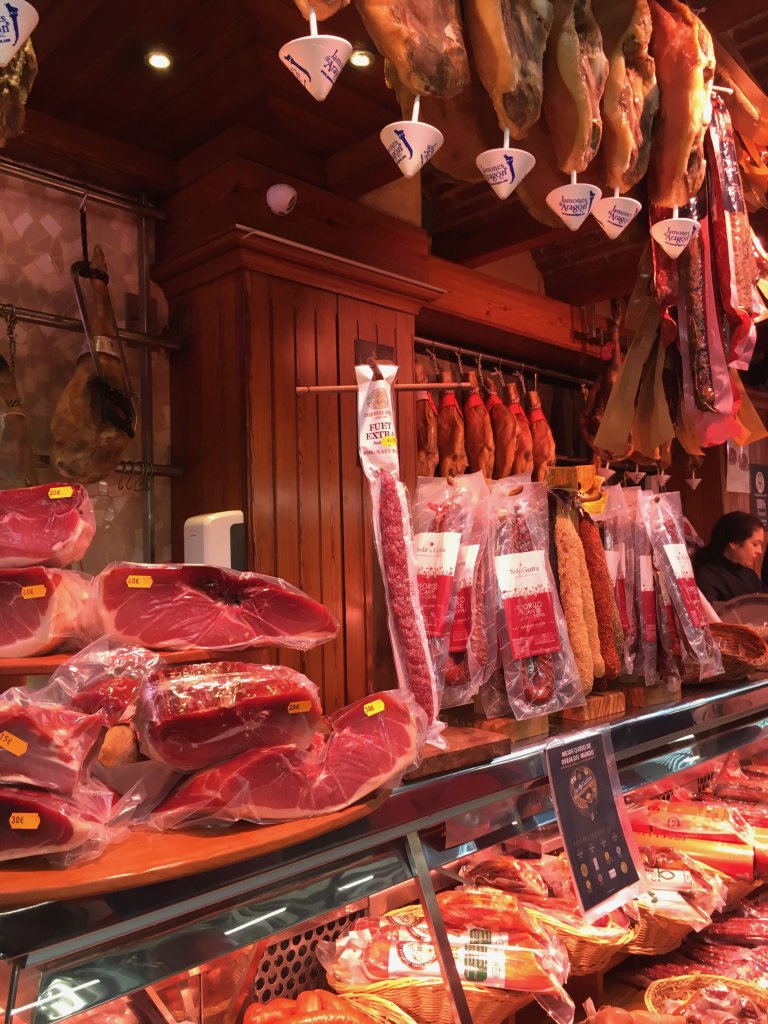 Dry cured Spanish ham is one of the unavoidable delicacies at the market. Entire pig legs hang from shop ceilings, waiting to be cut. Rows of chorizo sausages attract hungry shoppers. Sandwiches of thinly sliced ham are too tempting to pass! In fact, the salted meat slowly melts in the mouth. A perfect snack indeed.

Valencia oranges are famous all over Spain. Citrus trees line the city’s streets and plazas; their fruits create vibrant splashes of color in the deep green leaves. Sipping a glass of freshly squeezed juice definitely adds to the pleasure of wandering the narrow alleys of the indoor market.

Valencia still has a few small traditional producers of traditional shoes, the espadrilles. A small shop, Encarnis Tomero, near the Central Market, has a beautiful selection, made in many colors, shapes and materials. Small local factories and artisans produce shoes, t-shirts and bags, according to ancestral traditions, but with a modern twist. The staff is friendly, helpful, and ready to offer advice. A perfect souvenir from Valencia!

Every year in March, during one week, Valencia becomes an incredibly loud and extravagant place. Fireworks and firecrackers resonate throughout the city at any time of night and day. Monumental statues stand proudly in each neighborhood. In addition, a huge statue representing the Virgin Mary stands Plaza de la Virgen. Her clothes are entirely made of freshly-cut flowers.

During the festivities, locals often wear traditional clothing. The falleras, groups of girls representing each section of the city, walk and dance in the streets. Consequently neighborhoods compete against one another for the most beautiful sculpture, and the loudest fireworks. This festival is unique to Valencia, and honors the work of carpenters. At the end of the week, all the giant statues burn, symbolizing rebirth and spring in a joyous ambiance.

The extremely well documented Fallas Museum (museo fallero) exhibits many dresses, description of the festivities, in addition to small replicas of the sculptures.

Valencia isn’t yet a major touristic destination for foreigners traveling to Spain. Consequently, the city doesn’t feel overcrowded and is truly pleasurable to discover. Restaurants offer fresh and delicious dishes, while activities vary from beach to cultural events, from the traditional Fallas to flamenco shows and soccer games. A city well worth visiting. 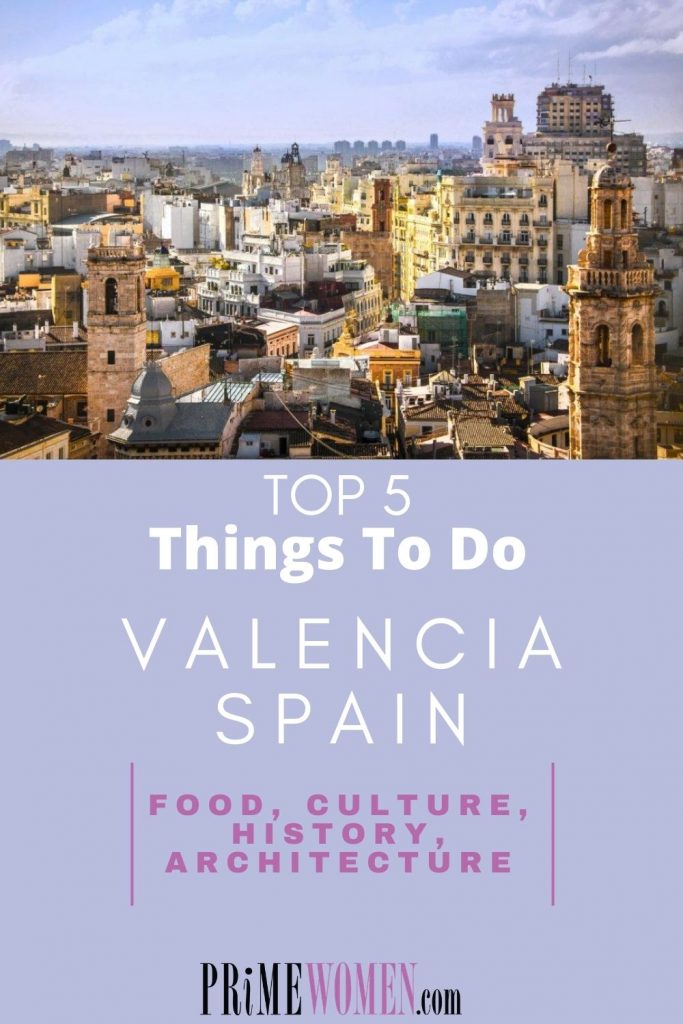