24 Hours in Lisbon: What to See

24 Hours in Lisbon: What to See 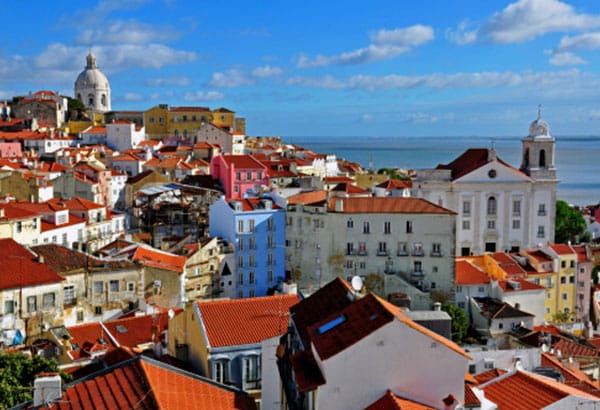 If you arrive with 24 hours in Lisbon as I did, with no knowledge of Portuguese, you will want to quickly learn the word for thank you, “obrigado.” The barista at Starbucks kindly taught me how to say the word correctly. Yes, I know I should have begun my 24 hours in Lisbon with coffee in one of the dozens of sidewalk cafes in the city, but after an all night flight and a quick shower at the hotel, I was not in the mood to be adventurous with my coffee when Starbucks was a 10 minute walk away. It was a glorious day, mostly sunny and a pleasant 67 degrees (it felt much warmer). A perfect day for a walking tour of the city. 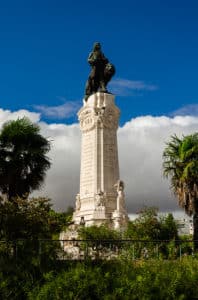 Marques do Pombal, view of the monument in Lisbon

Lisbon, the capital of Portugal, is one of Europe’s most beautiful and cosmopolitan cities. The city is set over a series of hills near the mouth of the River Tagus. Fearless navigators embarked from here in the 15th and 16th centuries to sail unknown waters and chart new lands. The city’s culture and heritage is greatly influenced by that golden Age of Discovery as we soon learned. With only 24 hours in Lisbon, we booked a guide with Blue Coast Travel.

At 2:00 pm, we met our guide, Cidalia Marisa Santos at our lovely hotel, the Pousada de Lisboa. Strategically located on the edge of Lisbon’s huge riverfront square, Praça do Comércio or Commerce Square, the hotel was a great spot to began our tour.  The first sight was the statue of Marques de Pombal, prime minister to King Joseph 1st, who was responsible for the reconstruction of Lisbon after the 1755 earthquake and tsunami.

The landmark 19th-century arch lies at the northern edge of the concourse near the southern tip of Rua Augusta, the city’s main pedestrianized thoroughfare. Designed by Portuguese architect, Eugénio dos Santos and built to mark the reconstruction of Lisbon.

We walked through Downtown (Baixa) and continued to Rossio, the heart of the city.

A must try in Lisbon is the cherry liqueur at Ginginha do Rossio. If you’ve ever watched Anthony Bourdain’s No Reservations (a TV series where he uncovered the best in culinary cuisine around the world) you’ve probably seen him at this very spot. 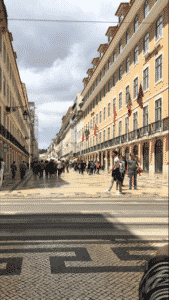 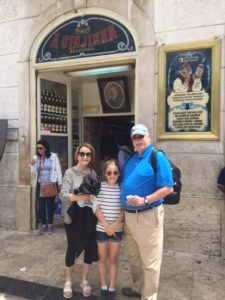 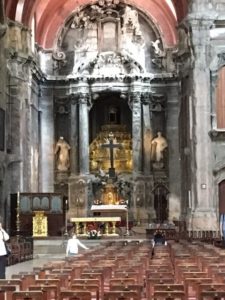 Next stop was Praça S. Domingos, the Dominican church burned by a fire in the 20th century. There Marisa explained the relative religious tolerance in medieval Portugal, which came to an end in 1497, when King Manuel forced close to 20.000 Jews to convert. In 1506, a massacre of roughly 2.000 jews occurred when they were blamed for the plague and starvation. By 1536, the inquisition brought an end to the persecution. A star of David memorial now stands, stating that Lisbon is a city of tolerance for every language of the world and apologizing for the Jewish persecutions often made in the name of God and the Catholic Church.

As we walked from the Square to Rossio, Marisa pointed out the unique Santa Justa elevator is an architectural cousin of the Eiffel Tower, designed not by Gustav Eiffel himself, but by a disciple of his. Rather than walk up to Old Town, we made use of the Lisbon funiculars and lifts that level the hilliness of the city.  Once at the top, we got a great overall view from Portas do Sol, one of the city’s former doors, just outside the old moorish wall. My granddaughter loved the cartoons depicting Lisbon’s history painted on walls.

Her favorite cartoon illustrates the departure of Vasco da Gama to India in 1497. He arrived in 1498 and returned in 1499, discovering the maritime route to India.  His discovery assured the Portuguese the monopoly of the spice trade and made Portugal very rich and powerful.

We continued down through Alfama, the oldest part of the city with winding little alleys and small medieval houses. The locals were decorating their homes and patios in preparation for celebrating St. Anthony’s Day, a Lisbon holiday on June 13th. It was a step back in time as we observed elderly ladies talking on the doorstep of their houses in the Old Alfama Jewish District (Judiaria). 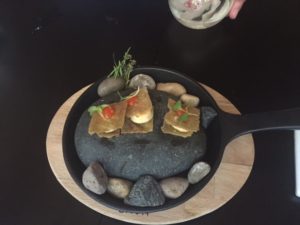 We ended our three hour tour at 5:00, took a needed break and prepared for a gastronomical feast at the newly opened Lisboeta restaurant at our hotel, Pousada de Lisboa. If you have 24 hours in Lisbon or more, I would highly recommend the 7 course tasting menu–an absolutely amazing meal with fabulous wines and the most unique course presentation I’ve seen anywhere.

After a restful night’s sleep and breakfast at our hotel, we once again met Marisa for a four-hour tour of Sintra and Cascais. With only 24 hours in Lisbon, it is a bit of a push to include more than the city of Lisbon itself, as you would need to skip any museum visits. However, since we were traveling with our 11 year-old granddaughter, we thought she would be more interested in seeing the fascinating city of Sintra and the beautiful seaside area of Cascais. 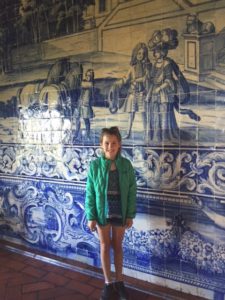 While in Sintra, we wandered through the charming old town centre and then decided to visit the National Palace of Sintra. This genuine medieval palace is topped by stunning conical chimneys and decorated with the most beautiful mudéjar tiles.

These 18th century Portuguese tiles were most likely made by one of the masters of the Portuguese 18th century tile industry who signed with the initials PMP, depicting hunting, chivalry, and countryside scenes. The master used different shades of cobalt blue to create depth.

Unfortunately, lack of time also kept us from visiting the romantic and eclétic Pena Palace, a summer royal residence from the 19th century, but that is just another excuse to come back again.

Before reaching the charming town of Cascais, once a fishing village, but now a very charming and trendy cosmopolitan resort, Marisa took us to Cabo da Roca, the most western point of continental Europe. We made our way back to Lisbon along the seaside and enjoyed what seemed to be Portugal’s version of the French Riviera, just in time to board our cruise ship for our next adventure.