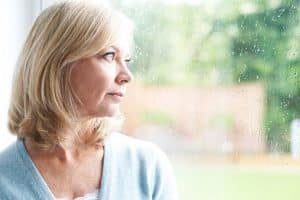 Women are affected by depression nearly two times more than men. The increased influence of fluctuating hormones, economic status or situational reasons, are all suspected reasons why. What’s the answer? Could yoga be your new antidepressant? Studies are promising that, in partnership with medication, your yoga mat may help.

The not fast but lasting new antidepressant: Yoga

Don’t expect immediate results, but down dog and they will come. During a study published in Psychological Medicine subjects either did Hatha yoga or went through a health education course for 10 weeks. There weren’t any significant differences initially, but researchers continued following the subjects and found at three and six months after yoga classes ended yoga was superior to health education in alleviating depression symptoms. Even after you put your mat away and it’s collecting dust you can experience positive results. Yoga helps depression.

In a study published in PLoS One, twice weekly yoga sessions for eight weeks again resulted in a decrease in the severity of depression, this time during the study. Researchers qualified yoga’s positive influence on scores pre and post as large. Self-efficacy and self-esteem were also significantly boosted. Since poor self-esteem can often lead to depression, this one is important.

It starts early. We get conditioned to critique ourselves based on false images of air-brushed models, and the ideal of the perfect life. We tend to go for the jugular of anything we’re not doing well instead of focusing on all the reasons why that might be true. Might it be that you’re not the CEO or the marathon runner because you’ve been raising beautiful human beings you brought into this world? Perhaps yoga should be mandatory in college and high school. Maybe in the dark where we can’t compare poses or yoga tights.

Hint: If you think you need more instructions, you don’t.

How did you do? Is your inner critic a bully?….

I never thought I was a bully until I listened to how I was talking to myself.

Is your mood better after a walk? Well, your heart and muscles may indeed benefit, but consider swapping a walk for your yoga flow once in a while. Yoga helps depression more than walking. In a 2016 study comparing subjects who did yoga to those in a walking program, rumination was reduced in the yoga group. What is rumination? Well, for one it’s something women are pretty good at compared to men. We like to ruminate, that is wallow in our, (often unproductive) thoughts and vent about them to our friends. 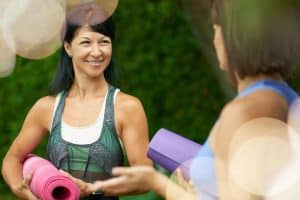 This tendency to mull things over and overthink negative matters that makes matters worse tends to be greater in those with depression. It’s the isolating nature of depression. When things are at the worst you tend to withdraw. If these studies on how yoga helps depression are any indication, instead of curling up in a ball, you might want to melt into child’s pose.

The good news is that yoga helps depression, and has cognitive benefits that I wrote about last month.  That combination alone makes yoga look like a mighty health elixir.

Don't Let the Downside of Menopause "Weigh" on You

Plank For Core: The Good, Bad, and Ugly

Is Eating Carbs Bad for Your Diet? Stop the "Carbage"

How to Build a Firmer Butt