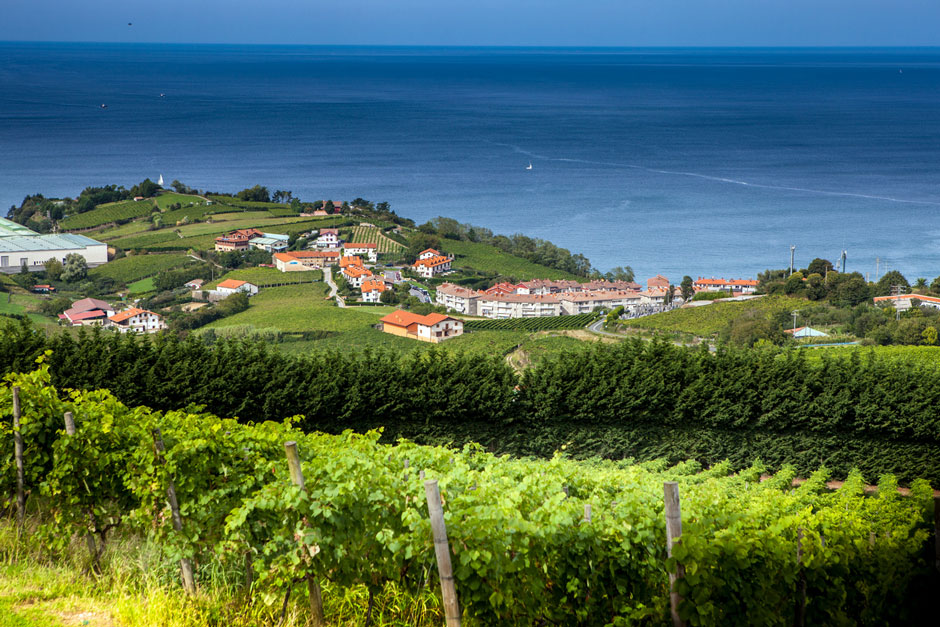 In 1991, Spain’s Basque Country’s government suggested to the Guggenheim Foundation that they could fund a museum to be built along Bilbao’s port. Obviously in the Foundation’s opinion the culture, cuisine, and stunning landscape of the Basque country, the extreme western end of Spain’s border with France, was an influencing factor to move ahead. The Bilbao Guggenheim Museum became a reality of contemporary beauty and also Bilbao’s main source of income today. With architecture designed by Canadian-American architect Frank Gehry, the Bilbao Guggenheim Museum opened in 1997 to both critical and public acclaim. It was named in the 2010 World Architect’s Survey as one of the most important works created since 1980. The Guggenheim Foundation rotates some of its permanent collection through the Bilbao museum and also organizes temporary exhibitions there.

The building itself is the principal star. The exterior fits magnificently into the riverscape of bridges and water in Bilbao. Inside and outside the building many permanent sculptures shine. 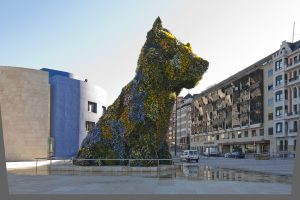 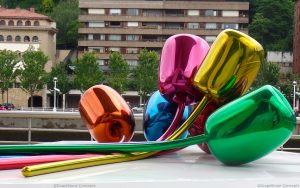 Currently two important exhibits are rotating through the Bilbao Guggenheim museum: “Chagall, The Break-though Years 1911-1919” and “Art and China After 1989 – Theater of the World.” It is ironic that both exhibits highlight the personal struggles of war and oppressive governments. Marc Chagall, a Jewish Russian-French artist, was reunited with his finance in Vitebsk, Russia in 1914. He was trapped there by the outbreak of World War I where he experienced the inequality and prejudice in Russia which would influence his modernist art. 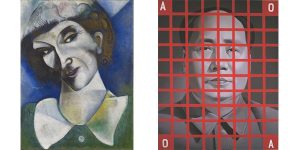 China’s Tiananmen Square Massacre of 1989 shaped the people and art of China. Seventy-one key artists’ works are exhibited here. The artists serve as both catalysts and skeptics of the transforming country. Identity, equality, ideology and control were all in flux after 1989 in China. 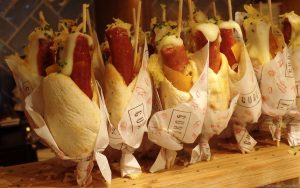 The charming cuisine of the Basque country draws visitors to Bilbao. Following a morning trip to the Guggenheim museum, the Plaza Nueva square welcomes the adventurous diner to the world of Pintxos (pronounced peen-chos.)  ‘Pintxo’ is a ‘Basque-ified’ take on the Spanish word ‘pincho,’ which itself comes from the verb ‘pinchar,’ which is ‘to pierce.’ Pintxos are traditionally pierced with a cocktail stick attached to a piece of bread. 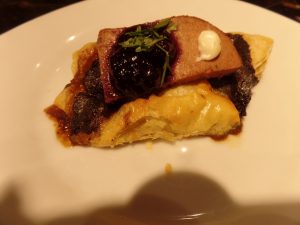 Two of the best places to experience Pintxos are located in Plaza Nueva not far from the Guggenheim. Enjoy hospitality, wine and cocktails, along with Pintxos at the restaurants Victor Montes and Gure Toki. Both offer a plethora of Pintxo choices ranging from the elegant Victor Montes’ Foie Gras topped with cherry sauce on puff pastry to Gure Toki’s hotdog-like sausage and cheese wrapped Pintxos.

Spain is Gin & Tonic crazy. Many restaurants will include a long list of imaginative G&T selections, such as the Hendricks Muddled G&T and the G’Vine Floraison G&T. G’Vine is one of the first gins that uses a grape alcohol. Add hibiscus leaves to this unique blend for a refreshing G&T. 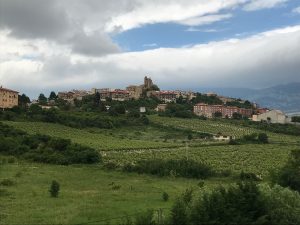 Mixing wine, cuisine and a Bilbao Guggenheim museum visit will give you a view of the vibrancy and the natural beauty of the Basque region of Spain. An extended visit to the Basque Country could include a stop in the Rioja Alavesa wine region and a half-day coastal sail from the Bilbao estuary into the Atlantic Ocean, the Bay of Biscay. Sightings of whales, dolphins, and porpoises are common. The modernization of the Basque region along with important art of the Bilbao Guggenheim Museum makes Bilbao a preferred destination for the discerning traveler.

A Wine Lover’s Favorite: Spain’s Priorat at the Foot of God’s Ladder