I know that a huge number of those who love the 60s music of the Doors, Jimi Hendrix, the Beach Boys or the Beatles are still in their twenties.

That the largest demographic buying flashy, testosterone laden, sports cars are those aged 55 plus.

It’s also a fact that;

One of the biggest music trends just now is back to 1970s vinyl, and current fashions favour the floaty styles and patterns of the same decade.

From this, you might conclude that those responsible for such trends should be considered style pioneers; economic 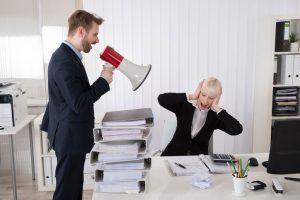 demigods and technological innovators who knew what they were talking about.

Instead, sometimes in business, women over 50 find ourselves being spoken to (loudly of course since it’s assumed we may be hard of hearing) in a manner which dismisses any comprehension of “modern” living.

There’s seemingly an invisible barrier that grows up between generations which states (in large letters for the myopic) that “The world is for the young and you’ve had your day.”

Well, guess what? Some of us women over 50 are still doing it have been there, done it, and even bought the original t-shirt.

The Advantages of Being Grey in the Business World

1. Firstly, there’s no need to be grey

Not only can hair colour be any shade you wish (I’m thinking of Dame Helen Mirren’s recent pink) but in our more confident years, the angst of wearing eye-catching colours has lessened. Acid brights also go better with paler complexions.

2. If you walk tall, you cast a long shadow

I have always believed in projecting how I want to be viewed, and boy have I learned how to project authority. Age, parenthood and seniority in business taught me that, as well as several decades of having my corners knocked off till I am a smoother operator in my 50s than I ever was. 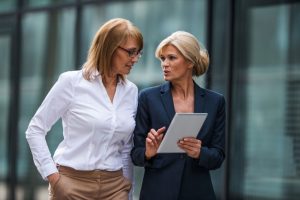 3. Losing the will to fight

I sincerely hope I’ve lost the will to fight for what is NOT important: the bigger chair, the latest handbag, even a promotion or pay raise which would take me away too much from the other things I love doing. Assume that I’m a spent force however, and you will soon find yourself mistaken. As a woman in my 50s, I’m much more choosy about my battles.

4. Knowing your own worth

After years in business, we’ve all had time to recognise where our strengths and our weaknesses lie – and to grow comfortable with both. With a little seniority, you can often choose to surround yourself with those who complement your own skills and (if you are smart) with those who will challenge you and keep a business innovating.

It’s no secret that older folks can be as dismissive of the young as can happen in reverse. So this problem isn’t a factor of age; it’s more a failure to engage, to listen and learn from each other so that we make work a team game. If it’s happening to you, speak up, but don’t forget to listen too.

Just sometimes, it’s necessary to remind colleagues that we are here, that we count, that we are valuable. When you’ve been around the houses a few times, you are more likely to know both how the world works and how to throw a spanner in it, subtly, if required.

7. Not playing at all

For someone with a few decades of experience playing the game of business, minor politics and resentments can be brushed off more easily. When the mortgage is reduced, the kids are through college and a person has grown more comfortable in their own skin, definitions of being “successful” tend to mature too.

Far from losing the will to live, we’re only just getting good at it.

It’s undoubtedly hard to be rebuked by offspring or corrected by someone much younger or less experienced, but with self-confidence, it can be seen as a huge compliment.

After all, the worst thing might be to become irrelevant and invisible. While you are being “corrected” you remain at the centre of the action. And age is no determinant of being right or wrong.

Debate allows views to be shared, which can help both sides to grow in mutual understanding and ability. And if a younger person is bringing information of which you were genuinely unaware, then they are bringing you a gift, should you wish to take it.

The correct course of action when being patronised, however, I find is to respond with excessive interest. Asking someone for increasing detail on their opinion exposes any lack of depth in their own knowledge and thinking. If done with a sweet smile, the patroniser is hook, line and sinker committed to exposing themselves as a lightweight before they even know they’re on the hook.

The important thing though is, once your protagonist knows they’ve been out-maneuvered, to be gracious and bring them back from the brink. Honour has been served with no loss of face on either side (see point 5). Best of all, they will think twice before underestimating you (and hopefully any women over 50) again.

I also learned years ago that things which seemed complex or difficult, scary even, were often just small tasks dressed up in fancy clothes and jargon. 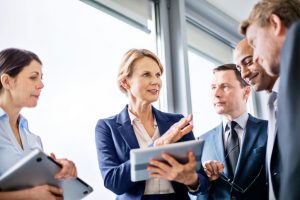 I am distressed when women over 50 don’t try things such as social media, digital marketing or new ways of trading largely because the language is unfamiliar, the technology is emergent or things simply aren’t as they were.

Fact is, they probably are. There’s not much genuinely new in the world when it comes to the process of trade and business. Technology has changed how communication and marketing is carried out, but the techy person who fulfils that process still needs someone with honed instincts on what sells, to whom and at what price.

Business is a team sport and it’s not helpful for everyone to be equally skilled in every aspect of the process. Not only does the process itself change with increasing rapidity, but we all work better when we play to our personal strengths, not our age.

In fact, a lot of how women over 50 are viewed comes down to how we view and present ourselves.

To know everything, be everything and to remain at the top of the tree forever is unrealistic, but while in our prime, the ability to be what we want to be ought never to be greater.

The Collins English Dictionary defines “Grey Panthers” as “A member of the generation of affluent older consumers, who regard themselves as young, active, and sociable.”

Personally, I’d substitute “are” for that “regard themselves as…” phrase.

We are how we live.