Internal Customer Care: 5 Lessons for the Workplace and Beyond

Internal Customer Care: 5 Lessons for the Workplace and Beyond

I am forever grateful for having worked directly for Colleen Barrett, then-President of Southwest Airlines, for a significant part of my 21 years as an active member of the Southwest family, a family I still consider mine. As with U.S. Marines (try finding an “ex-Marine”), you rarely find former Southwest employees who consider themselves “exes.” Southwest is known for its strong relationship bond with employees, and from the start, one element contributing to this bond was Colleen’s natural desire to treat employees like family, which in part manifested itself in the gifts, cards, and notes she sent to employees. When she became President, realizing her time would be constrained and knowing she wanted to formalize and expand this activity, Colleen asked me to create a new department that would ensure the events that mattered most to employees were always recognized. We called it Internal Customer Care.

I met with leaders, explaining our mission and gaining their buy-in. My team identified contacts in every station across the system, and we created a website that gave our contacts an easy way to report what was happening in their world- Mike married; Julie finished a triathlon; Mary’s mom died; Greg was promoted. We sent cards, notes, and gifts as we celebrated and grieved with people. When an illness or other situation would be long-term, a “case” was assigned to a team member who contacted the employee every month, with a call or a note. Our guiding principle was simple: “If this were your sister, cousin, or friend, how would you respond?”

One day, “Lisa,” the wife of an employee, called. She had heard about us and needed help. “I had some bad news following my 6-week postpartum visit,” she began. We knew that she and “Dave” had 3 boys under the age of 5; we’d sent a card when their newborn arrived. “Turns out a cough I’ve had is a symptom of terminal lung cancer. I’ve never smoked…I had no idea…” She went on. “Can someone come help me interview nannies for my boys? And explain benefits, life insurance, and Dave’s leave policy? I need to plan my funeral, too. I don’t have long, and I want to get this done before I tell Dave, so we can just concentrate on each other and our boys.”

My team member said she would be honored to help – and she did. She flew to their city, spending several days offering support and handling each of Lisa’s requests. Lisa died a few months later. Saddened, we arranged for her remains to be flown to her hometown for burial, and we attended her funeral. Later, Dave came to visit us, telling us tearfully that he and the boys were doing okay, and that he would never forget what we had done for his family.

Eventually, I left Internal Customer Care for Labor & Employee Relations, where I was on the team negotiating the contract for Dave’s work group. Walking through an airport one day, I saw Dave jogging my way. Reaching me, he took my arm and pulled me into a gate lounge.  “Listen,” he said, “I’m telling everyone that when the company makes their ‘best and final’ offer, it’s really best and final. I say, ‘I know these people. They’re real, they’re decent. They don’t want to screw us. Vote yes. Ratify.’ Good to see you—gotta go.”

Standing in that gate lounge, watching Dave run to his flight, I saw the tangible value of the work our team did. Yes, what we did helped people feel great about being part of Southwest, and yes, we loved serving those people. But here was walking (jogging) evidence of real ROI on that work.

For years, it was obvious that Southwest Airlines’ focus on its people paid dividends. As an employer of choice, we attracted the best talent; our turnover was low; and we had engaged employees with an ownership mentality. This contributed to decades of profitability in a notoriously brutal industry and to customer satisfaction statistics our competitors couldn’t match. My encounter with Dave confirmed for me that delivering internal customer care was an integral part of our success.

Leading the Internal Customer Care department provided lessons useful for anyone interested in building a similar function at work, or simply in enhancing personal relationships. Here are 5 lessons that resonate with me, having proved themselves true over and over. 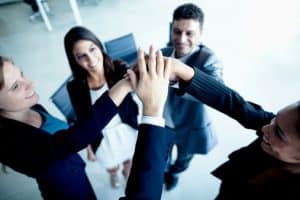 Especially in business, relationship tends to be transactional. “What marks must I hit to be promoted?” “How can I get him to produce results?” So it can be surprising when people in your business life express an interest in knowing you, and joining in celebrating achievements and grieving losses – especially when those people are your leaders. But when motives are proven pure, that interest is a powerful thing. It helps build bonds that produce results like those Southwest Airlines has enjoyed for nearly 50 years. Here’s an immutable truth: when you sincerely invest in relationship, positive results follow. In business and in our personal lives, it’s that simple (not easy—simple).

2. People respond positively to genuine interest in them.

This sounds like a given—but it doesn’t happen enough. Initially, I was surprised by people’s delight as they described a note or gift they’d received from Herb (Kelleher, founder and then-Chairman and CEO of Southwest Airlines) and Colleen. It clearly wasn’t about the monetary value of a gift, the card’s great graphics, or even the note’s specific language. It was about being seen, recognized, and valued.  Everyone wants this. Everyone.

A handwritten note (even a hand signed card) is gold. E-mail if you absolutely must, but I can’t tell you how often I’ve heard something like, “I never get real mail anymore. Your note made my day!” Dash off a few and see.

4. Sometimes the very best thing you can do is listen.

Maybe you can relate: I have a bias for action. You have a problem? Let me fix it. But I learned there are problems I can’t fix. I couldn’t turn back time and prevent a teenager from getting into a car with an alcohol-impaired driver. But, even feeling impotent in the face of raw grief, I could listen to that teenager’s father describe his son’s funeral. I could provide contact information for a grief counselor, and I could listen to him share things he needed to say aloud, but couldn’t voice to his other beloveds, who also mourned this crushing loss.

Here’s a hard fact for all of us problem solvers: some problems are beyond our scope. But we aren’t without options. We can provide a listening ear and a strong shoulder for those who need to talk, shout, weep, or rest against someone who cares. We can resist the urge to offer easy bromides. We can lean into the grief of another, helping them bear an unspeakable burden, even if only for a bit.

5. People can smell inauthenticity a mile away.

People quickly came to understand that we – and the executives we represented- truly cared. Nothing we did felt manipulative because we were not manipulating. We honored commitments, answered questions honestly, and treated people with dignity and compassion. If we’d tossed out gifts and impersonal greetings, Internal Customer Care would rightly have been seen as an inauthentic means of trying to buy people with trinkets and cards.

People hunger for authenticity. They recognize it and respond to it. They also recognize inauthenticity and reject it—and those offering it.  If you feel unprepared to handle the emotional freight that can come with interacting in a genuine way during the most meaningful (and most devastating) times in people’s lives, do yourself – and them- a favor and don’t extend the invitation.

I now serve others in a major academic medical center, where I’m applying these lessons, and where we’re in the nascent stages of creating our own Internal Customer Care. Whether you’re a doctor, flight attendant, pilot, or nurse, some things are always true. Everything goes back to relationship—results reflect relationship. People respond to your genuine interest in them. Life can be messy. Sharing it with others can be difficult. But being authentic and extending attention and compassion to others brings great joy and deep meaning to life.

7 Steps for Coping with Stress

4 Books Every Leader Should Read for Career and Life Success