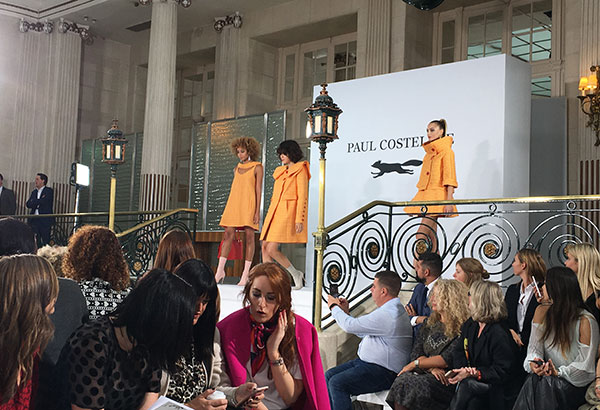 We had the best time in London! Fashion Week was an unqualified success. Aside from a few hiccups regarding coordination (mine, not theirs), it went smoothly and we were able to navigate like pros. Or semi-pros. Our entourage included Founders Dorthy Shore, Valerie Freeman, Jan Fletcher OBE, and myself. Oh, and our fabulous photographer, Jay Freeman. The only disappointment was that Dianne Patterson, the fourth co-founder of Prime Women, was unable to make the trip. Otherwise, it was perfect.

We picked up our international press credentials on Friday morning from the British Fashion Council office. Once signed in, we climbed the stairs to the Designer Showrooms. While it wasn’t elbow to elbow, it was well attended. We made our way through the rooms where the 150 designers had their select items on display. Hats, jewelry, shoes, ready-to-wear…everything you might want. We noted pretty quickly that the three of us (four if you count our photographer) were receiving quite a few looks and twitchy smiles (followed by giggles) as the young attendees put their heads together and whispered. I’m sure they were trying to figure out how we are all still ALIVE since we are SO OLD. 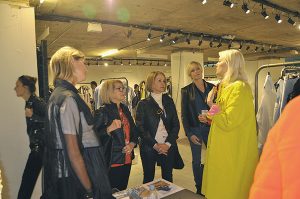 As we made our way from space to space, I began to wonder if some of the designers and their reps at the tables were silently begging us to pass them by – terrified that “the oldsters” might be attracted to their offerings. Imagine! Their reputation for coolness would be obliterated and they would have to throw themselves down the circular staircase in despair.

But everyone we approached was friendly and informative. The designers agreed that women our age have the wherewithal to buy their creations and they didn’t appear to be horrified at the thought. Several mentioned their own mothers who have begged their offspring to adapt creations for themselves and their friends. Sleeves were discussed to cover upper arms (batwings), and we pointed out in their collections the versatility of certain pieces that could be adapted to various ages dending on how each was styled.

The first show in our London Fashion Week report was Fyodor Golan, which was held in the British Fashion Council Show Space. We actually had seats! An auspicious beginning. Not everyone gets a seat. The collection consisted of contemporary women’s fashion wear – a dystopian future through sportswear. Colors ranged from royal blues to mustard yellows and bright whites. Although the clothes were not exactly what you might find in our closets, looking was fun. It’s impossible to not experience a flush of excitement when the lights dim and the music kicks in.

London Fashion Week features 85 catwalk shows and presentations and 33 events from emerging talent to global brands, so covering everything is a daunting, if not impossible task. We split up over the following days to be able to take in the most presentations and shows – Jasper Conran, Paul Costelloe, Katie Ann McGuigan, Huishan Zhang, and more. 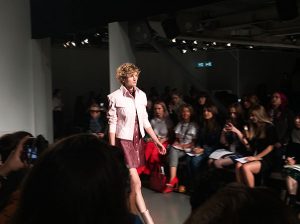 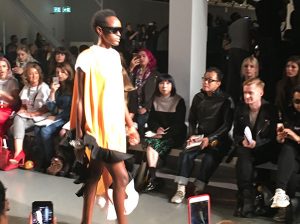 My next show was Jasper Conran, at Claridges Ballroom. I arrived to a herd of paparrazi outside the showspace. When they all wheeled toward me I nearly had a stroke. Luckily, they were focused on someone behind me. Inside the Ballroom, the lights were already dimming and photographers were jockeying for shots of celebrities on the front rows. The collection was striking in color, with a theme of athleisure running throughout, and a multitude of all weather jackets. A steady stream of yellows, corals, pinks, greens and royal blues in separates and simple color-blocked slipdresses with sporty striped detail made their way past an appreciative audience. My favorite was a dress resembling a walking sunset. 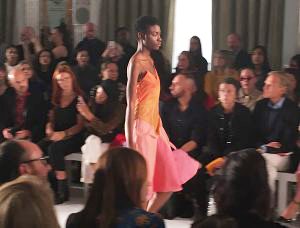 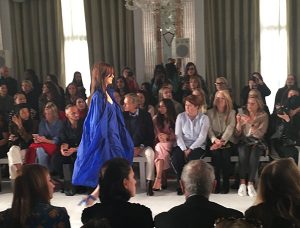 On Monday, our next to last day in London, I popped out of bed early (well, popped may be a bit strong – more like crawled out) and made my way to the Paul Costelloe show at London’s Waldorf Hotel. Seeing a lengthy line out front, I thought I’d try my luck and approached the young lady with the clipboard at the doorway. She took a look at my invitation and told me to go in. Score! Much to my delight, I found myself seated on the front row of the Palm Court with a glass of champagne in my hand and a gift bag by my side. The atmosphere alone would make this my favorite show, even had the models worn burlap sacks. Luckily, the parade of looks down the runway was nothing short of breathtaking. The fabrics, the designs… all were simply gorgeous. I urge you to click on this link and take a look at everything! 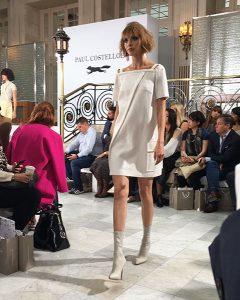 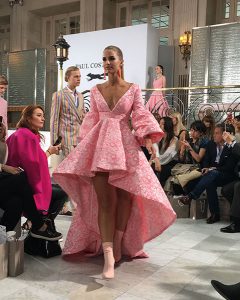 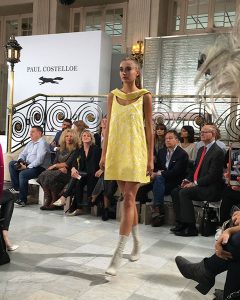 So, after seeing all there was to see – what trends can we take straight from the runways?

Styling pink and red together is typically a no-no, but it is all the rage from London Fashion Week’s offerings. Paul Costelloe, Antonio Berardi and J.W. Anderson sent edgy and romantic pairings down the runway.

White is where it’s at. Clean, crisp, and stunning. Roksanda, Roland Mouret and Paul Costelloe, amongst others, used white in dresses, pants and jackets. 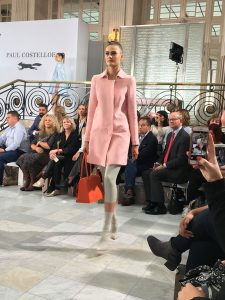 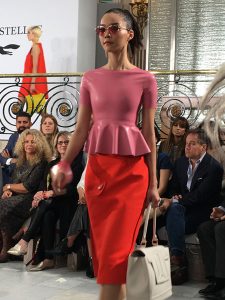 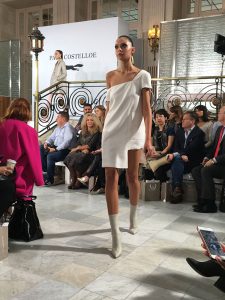 Luckily, it can be worn in outerwear and overlays if you choose to leave sheer tops to the younger generation.

Stripes going every which way on dresses, skirts, and pants are fun and flirty – or as accents that evoke an athleisure aesthetic.

When it Rains it Pours

Rainwear and all weather gear was everywhere, in complementary and conflicting colors. If caught in gloomy weather, you can still shine. 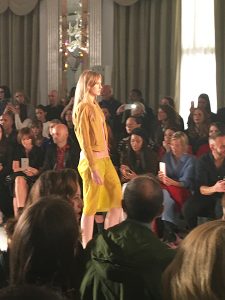 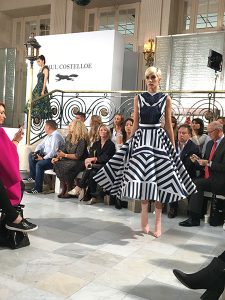 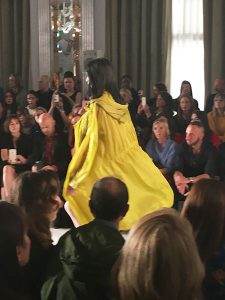 Bell sleeves, trailing ribbons and ties abound from elbows and wrists. Beautiful, but watch yourself at dinner when reaching for anything beyond your plate!

Ruffles and flounces on shirts and skirts give a feminine flair to your wardrobe. Just don’t overdo! 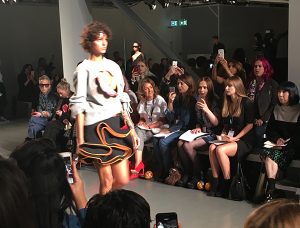 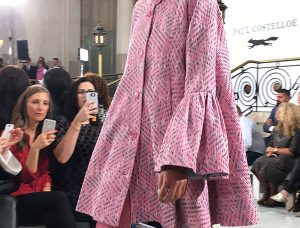 It was encouraging to find that there were elements in each show that could easily be adapted to the chic and discerning of any age. What will be your favorite?

5 Tips to Refresh Your Winter Wardrobe

5 Tips to Refresh Your Winter Wardrobe