Depression After 50: We Really Need to Talk - Prime Women | An Online Magazine

Depression After 50: We Really Need to Talk

“A woman’s risk of depression doubles or even quadruples during the menopausal transition.”

“Some studies show that one-third of women will experience a major depressive episode in their lifetime.”

Depression can be debilitating – sucking the joy out life, making activities we once enjoyed uninteresting, rendering work impossible, closing us off from those we love.

Even more, clinical depression, when untreated, significantly increases a person’s risk of suicide.

In the manner of ripping-off-the-Band-Aid, let’s get the ugly statistics out of the way first.

According to the Centers for Disease Control and Prevention:

Perimenopause and menopause can cause or exacerbate depression. Depression can lead to suicidal ideation, attempt, and completion.

So, with all that, well … we really need to talk. Openly. Honestly. Often.

Kate Spade’s suicide at 55 was as mystifying as it was devastating to many of us. She was bright, beautiful, wildly successful, and overflowing with talent and creativity – who could have imagined she would “choose” to end her life? And while no one but Ms. Spade can truly know what was going on in her mind and heart, her suicide has helped lend urgency to an overdue conversation about the link between menopause and depression.

A link that leads, too often, to suicide.

So what’s going on here?

We use “depression” as a blanket term to cover a range of emotions, and that’s not only inaccurate, it can be dangerous. Anyone who’s suffered from clinical depression will tell you it’s very different from sadness or grief and needs to be treated accordingly.

Depression rises to the level of “clinical” when it lasts for two weeks or longer and comes with other symptoms such as change in appetite, loss of interest or pleasure in things you usually enjoy, changes in sleep patterns (too much or too little), feelings of worthlessness or guilt, increase in “purposeless” activity like pacing, and thoughts of death or suicide. 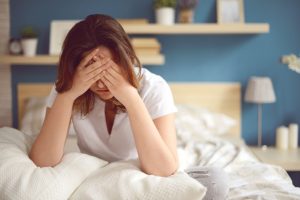 Rather infuriatingly referred to as the “menopause blues,” depression in perimenopause – the years leading up to menopause – is fairly common, though it should never be regarded as “normal.”

Estrogen interacts with certain chemicals in the brain, including those which regulate mood. In some women, this translates to rage, in others, anxiety. And in many, depression. Hormonal fluctuations during the perimenopause years seem to make women particularly vulnerable.

The risk is even greater when a woman has experienced depression earlier in her life. Birth control and HRT can cause depression in some women, help alleviate it in others.

Pretty clearly, there’s a hormonal component. This is critical to understand because so many women are too ashamed and embarrassed to seek help, feeling as though they’re just being “weak.” They try and tough it out on their own, the way they grit their teeth and get through the hot flashes and headaches.

But we wouldn’t ask someone to simply “tough out” diabetes or leukemia or hypertension, and depression is no different: if your depression lasts longer than two weeks and significantly impacts your day-to-day life, you should seek professional help.

Is it a midlife crisis?

In addition to hormones, the realities of aging may play a role. Realizing you haven’t yet achieved your goals may be tougher at 50 than at 30, particularly in a sexist, ageist society that seems bent on telling women their lives are pretty much done when their ability to reproduce is gone.

Is it external pressures?

There are plenty of pressures outside our heads and hormones that can contribute to depression: Aging parents. Empty nest or wishing it were empty because the kids are in their “challenging” teen years. More responsibility at work, or more competition from younger colleagues. Physical challenges of perimenopause and menopause, including hot flashes, poor sleep, weight gain, headaches. Relationship challenges from a deflated libido and painful sex. Worries over a financial future in retirement.

So now that I’ve scared you and have you rethinking every time you got tearful at a Budweiser commercial (come on, those Super Bowl ones with the Clydesdales have all the feels), here’s the good news…

From the American Psychiatric Association: “Depression is among the most treatable of mental disorders. Between 80 percent and 90 percent of people with depression eventually respond well to treatment.”

Emerging from depression is not easy. It might mean taking medications you’re not entirely comfortable with, like SSRIs or other antidepressants. It may take time in psychotherapy. Cognitive behavioral therapy (CBT), where you train your brain to problem-solve its way out of negative thought patterns, can be quite effective against depression. Brain stimulation therapies such as ECT can help in more severe cases.

When depression is painful but not “clinical” in intensity or duration, there are many effective things you can do on your own: exercise is a wonderful, natural mood elevator (especially when it’s over), quality sleep, Omega 3s, sunshine, St. John’s wort, strong social connections with family and friends, good work, avoiding sugar, and – and we have the science to back it up – self care. It’s true: simply doing more pleasurable activities helps us be more positive generally. Surprise!

And the even better news for women in midlife: rates of depression decline in post-menopausal women, once hormones level out and the body and brain adapt to their new normal.

Depression should never be taken lightly. Mild depression can disrupt our ability to enjoy our lives fully. Major depression is dangerous. Life-threateningly dangerous. And it takes far too many women who are truly in their prime.

If you feel you or someone you care about may be suffering from depression, there is help. You can start finding your way back from depression by talking to a doctor or calling the National Suicide Prevention Hotline at 800-273-8255.