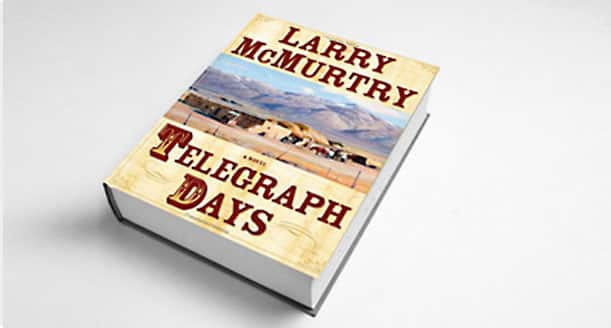 In his latest novel, Telegraph Days, Larry McMurtry offers us his best female character in Nellie Courtright since his Terms of Endearment’s Aurora Greenway. We have the joy of witnessing Nellie’s growth from young girl to mature woman in her adventures in the Wild West in the post Civil War years. She and her brother are left orphans when their father hangs himself after his plan to establish a plantation in No Mans Land near the tiny town of Rita Blanca. When they move from the failed plantation into the hamlet of Rita Blanca, Nellie secures her brother a position as the Deputy Sheriff, a position he holds his whole life despite single handedly wiping out a visiting gang of outlaws, and Nellie becomes the town’s Telegraph Lady, an important position. Indeed. She meets everyone in the town who resides there, which is not difficult to do, as well as everyone passing through, again, not difficult to do. One such visitor was Buffalo Bill Cody who hired her away to run his ranch and real estate businesses for him.

Nellie describes herself as “an organized woman who likes to kiss cowboys” among other things. She refuses to accept the limitations that society places on females and undertakes life with a gusto that is rare and refreshing. Many famous people pass through her life including George Custer, Bill Hickock, all 5 Earp Brothers, the Clanton Gang, Billy the Kid, Doc Holliday, General William Tecumseh Sherman, and, later in life, many early Hollywood legends such as Lilian Gish and Louis B. Mayer. Nellie was clever and had a way of making the world revolve around her much in the same way that Aurora Greenway did in Terms of Endearment.

Telegraph Days is humorous and even heartbreaking at times, but McMurtry wisely never takes the spotlight off Nellie for very long. Despite the long list of men passing through her life, it was other women that she helped and who helped her that make the novel resonate. One of them was Mrs. Cody, Buffalo Bill’s wife. Another was the proverbial prostitute with a golden heart that she recruited to be her brother’s wife and Rita Blanca’s new telegraph lady. Nellie was a good judge of character, above all, it seems.

Larry McMurtry has always had a way with women characters and he gives us a true woman in her prime with Nellie Courtwright. I think that you will enjoy spending time with her.