Never Coming Back by Tim Weaver - Women in Their Prime 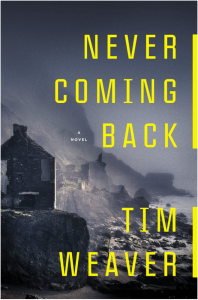 A family is ready to sit down and eat their evening meal. The table is set, the beverages are in the glasses, dinner is hot on the stove, the refrigerator door is standing open and a carton of milk is spilling out onto the kitchen floor, the front door is ajar and the family dog is wandering around the house whimpering for his people. The family’s cars are in the driveway, but the father, mother and two daughters have disappeared without a clue. They are simply gone…

Never Coming Back begins two years after the opening scene and the police have long given up on the search for the family of four. The missing wife’s sister asks an old friend, David Raker, the book’s protagonist, to find her family that has vanished. At first he refuses for health reasons, but then the sheer impossibility of the circumstances captures both his intellect and his interest. An international hunt for the family and kidnappers ensues and significant entertainment begins for the reader.

Never Coming Back was a huge hit in the U.K. and is part of a series featuring David Raker, but this mystery stands quite well on its own. However, If you like it, you may want to go back and read one of the other three: Vanished, The Dead Tracks, and Chasing the Dead. I predict that American mystery readers will like Tim Weaver’s work as well. Never Coming Back is a real page turner. It is not great literature, but it is a great summer or airplane read, and there is value in that.