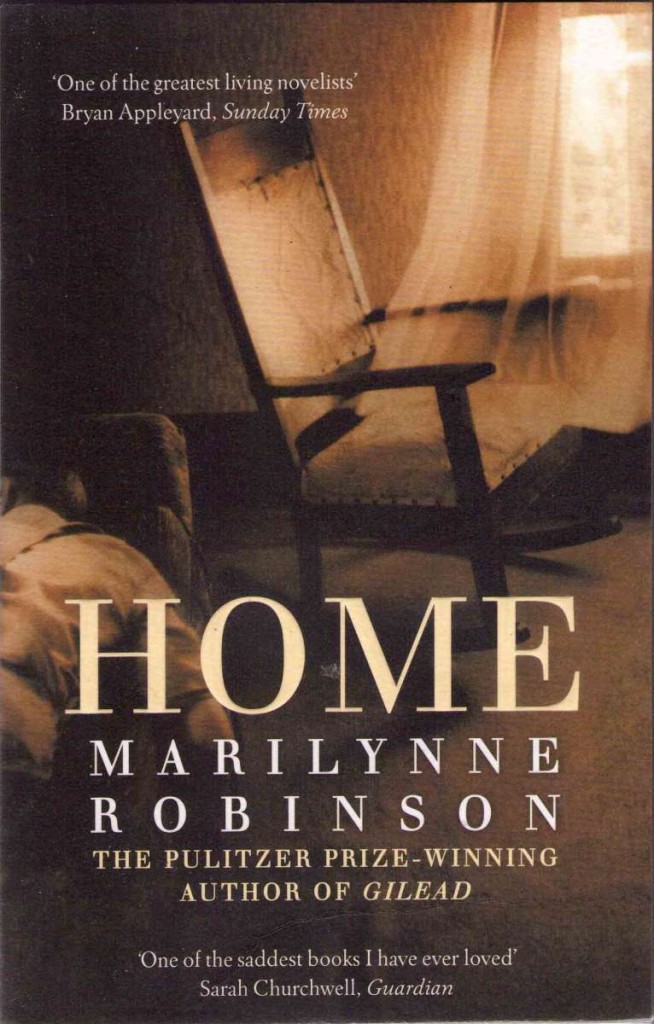 Home is set in the 1950’s in Gilead, Iowa. This is Marilynne Robison’s second novel situated in Gilead. Robert Boughton, whom we first met in Robinson’s novel “Gilead” as Reverend John Ames’ best friend is also elderly, ill and a retired Presbyterian minister. His youngest daughter, Glory, has come home to care for him at the end of his life, and to regroup after the failure of a relationship with a fiancée of many years. Her father believes that Glory and her fiancée were married, and she does not disabuse him of this idea. Glory had taught high school English for 13 years, and felt that she was good at this job. She enjoyed the independence that it afforded her, but during all the time that she taught, she had hoped for marriage, a home of her own and a family. To come back to Gilead at 38 years of age, single, and without any means or real assets feels like utter and abysmal failure to her.

However, her brother Jack or John Ames Boughton named after her father’s best friend, the Congregationalist minister in Gilead, the Reverend John Ames, is truly the family’s black sheep and failure. Yet Jack has always been first in his father’s heart despite the shame that he has brought on the family. Jack says that he has always felt like an outsider, as though he was never truly wanted by his brothers and sisters. His siblings all grew up to be well adjusted, achieving individuals of whom their parents could be proud. Jack always saw himself as “a bad kid.” Someone who never really understood what drove him to his self-destructive behavior, and he was completely unable to stop himself from hurting others as well.

Jack has been away from Gilead for 20 years. So he and Glory both come home at basically the same time. His father’s spirits rise immeasurably at the prospect of being reunited with his prodigal son, and Glory hopes that she will finally be able to make a connection with the older brother who has always been a mystery to her. In “Home,” Robinson tells us both Jack’s and Glory’s stories, and we learn about each of their heartbreaks and disappointments in recent and past lives. We learn their secrets and what makes them feel ashamed, their brave aspirations for reconciliation with family members and loved ones that they grew up with and each left.

Once again, Robinson presents us with richly drawn characters with deep emotions and complex interior lives. This book has more plot and action than either “Gilead” or “Lila,” but still the emotional landscape is given preferential treatment over any active story line undertaken by the protagonists. By taking this approach, we end up knowing not only more about the human condition, but more about ourselves as individuals as well.

“Home” can be a melancholy story about missed opportunities for actualization and love, but it is above all beautifully crafted and most evocative of what it is to be part of the human family generally and to be part of a particular family specifically. We can all relate to what we would have loved to have had in a perfect world, but we must all realize that writers and artists like Ms. Robinson help us make our way in the real world. Ms. Robinson is a true artist in every sense of the word.