A few weeks ago, I was invited to a friend’s house for a continued conversation among women as part of Women’s History Month. One of the many accomplished women I met was Donna Richardson. Donna handed me a card that read “Donna’s Tiny House Boutique.” I’ve always been fascinated by tiny houses and was very interested in the fashion boutique business Donna created.  I wanted to know more and thought Donna would be an interesting individual for our “What’s Next?” or “Second Acts” section,  as she just recently started this fashion business and is 55 years of age.

What I discovered was a woman whose entire life has been a “What’s Next?” of different businesses with a never ending flow of creative ideas and fearless determination to make them all unique and successful.

As far back as 4th grade, Donna Richardson figured out how to make something out of nothing. From 4th to 10th grade, she sewed, crocheted and knitted and started her own business. To give back, she crocheted afghans and caps for women going through treatment at a breast cancer center in Baton Rouge, Louisiana. Although she was involved in sports in high school—softball, track, gymnastics, cheerleading, she got swept up in the aerobics craze when she took her first fitness class, then asked to teach, and then of course, started her own fitness studio and worked as a consultant to certify instructors and coaches around the world. Then she became a motivational speaker and traveled to 50 states, 51 countries and 6 continents spreading the gospel of good health, mind, body and spirit. 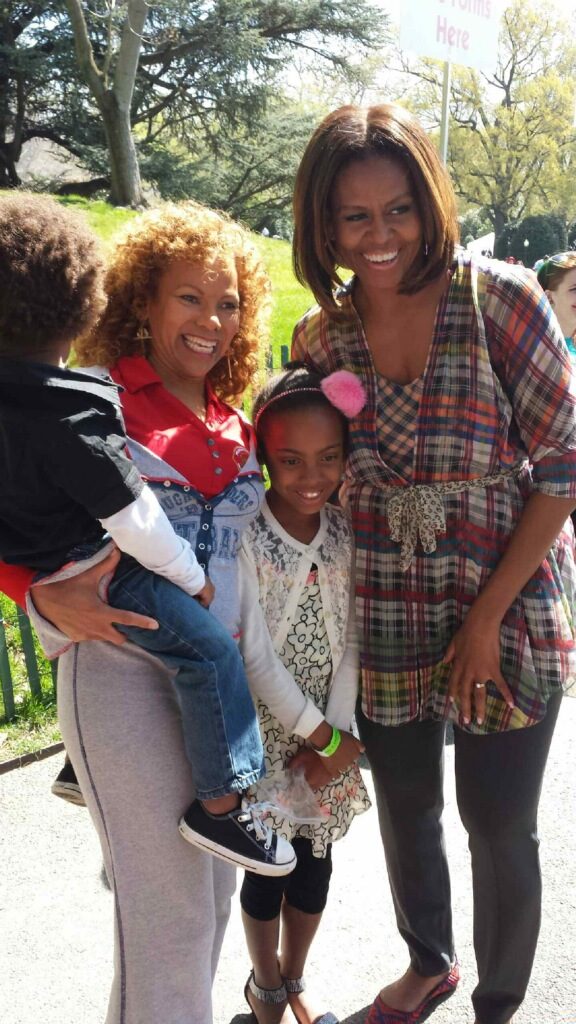 ESPN hired her to host a fitness and health show, which led to the Buns of Steel platinum videos, which sold over 10 million copies! That gig led to over 25 award winning videos, 6 years on the Today show, 2 years on CNN as well as Fox, BET and other networks as a lifestyle correspondent. She served on the Board of the Women’s Sports Foundation and Robert Wood Johnson Foundation. Because of her love of golf, she also served on the Board of the LPGA Foundation and was a consultant and spokesperson for the PGA of America.

Donna Richardson’s passion for travel led her to pitch a show to a network where 90% of their travel programming is hosted by caucasian men. The result? Donna is creating and producing her own travel show for women. If that isn’t enough, she was appointed by President George W. Bush and President Barack Obama to serve on the President’s Council for Fitness, Sports and Nutrition. She is the only person to serve two presidents. She was asked by President Trump to serve on the President’s Council Foundation. She was inducted into the Fitness Hall of Fame and named by Essence magazine as “One of 25 of the Most Inspiring Women in America.” Donna also taught for several years in South Africa at the Oprah Winfrey Leadership Academy for Girls.

At the age of 50, Donna climbed Mount Kilimanjaro. She led her team in the Hood To Coast Relay 200 mile run (at age 52), and the Paris Marathon (at age 54). If all of that doesn’t take your breath away, what comes next is truly phenomenal. After watching a program on tiny houses on HGTV, she decided she would market her newly launched clothing line in a tiny house. Thus was born “Donna’s Tiny House Boutique.” With her amazing ability to see and take advantage of trends, she is now building a brand new tiny house that will serve as a marketing tool for partnering with companies and corporations.

Donna is being invited to tiny house conventions all over the country and was asked to serve on the Board of the National Tiny House Foundation.

In my brief conversation at the dinner where I met Donna Richardson, I would never have guessed she was 50, much less 55. Her lifelong love of health and wellness has been great for her looks. However, it is her sparkling and positive personality that draws people to her. Her Facebook posts are full of great motivational quotes which beautifully describe her philosophy of life, “Visualize It, Believe It, Achieve It.” Donna definitely embodies those words.

When we talked, I found that Donna had already been thinking about what her tiny house could do for Prime Women! By the end of our interview, I was so excited about the possibilities of partnering with her! Donna Richardson has the ability to see beyond what is right in front of her, and she never misses an opportunity to create and to grow. I remain completely inspired.