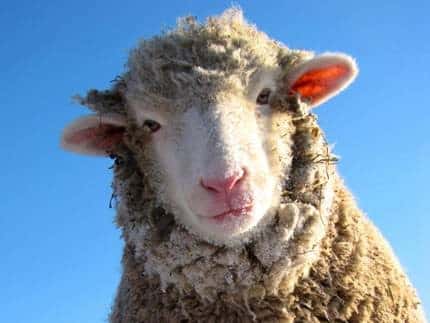 If you meet a sheep (and you should), chances are good they’ll remember your face for more than two years—especially if you’re smiling

According to the Chinese lunar calendar, February 19, 2015, launched the Year of the Sheep, celebrating the animal considered to be the most emblematic of kindness. The people at Farm Sanctuary shared some really interesting fact about sheep and how, as CEOs, we can learn a thing or two from sheep.

According to Farm Sanctuary’s shelters in New York and California, sheep wag their tails like dogs, they know their names, and they form strong bonds with other sheep, goats, and with people. We all know a friendly work environment adds to a company’s productivity so if you aren’t getting the results you want, try being friendlier.

Thanks to their cool rectangular pupils, sheep can see almost 360 degrees, including directly behind themselves! We CEOs wish we had that kind of vision. Since we don’t, we need to surround ourselves with people who can help us see what is going on all around us. A broad vision is key – right again, Farm Sanctuary!

Another study from Cambridge University found that sheep — like humans and some primates — can pick up emotional cues in both humans and other sheep. Not surprisingly, they strongly preferred smiling and relaxed expressions over angry ones, (duh!). A smile has been proven to change a person’s mood so when you see one of your hardworking employees, break out a smile. You may just make their day.

Researchers in the United Kingdom, writing for Nature, found that sheep have the same “specialized neural mechanisms for visual recognition” that humans do, which allows them to remember the faces of at least 50 individual humans and other sheep for more than two years, and that the specialized neural circuits involved maintain selective encoding of individual sheep and human faces even after long periods of separation. It is proven that an employee feels motivated when top leadership remembers his/her name. We all know this to be true.

5. The CEO of the Barnyard

Sheep can learn how to solve puzzles, remember what they’ve learned, and adapt to changed circumstances — all much more quickly than monkeys (we’ve all known a few monkey CEOs masquerading as sheep). The researchers note what they call the “impressive cognitive abilities of sheep” and find that sheep can perform executive cognitive tasks that are an important part of the primate behavioral repertoire, but that have never been shown previously to exist in any large animal other than humans and some primates. So if you are a CEO, take a few cues from the humble sheep and learn to take charge of your “barnyard.”

To read stories about rescued sheep like Carlee and learn more about Farm Sanctuary, visit farmsanctuary.org.