What you Need to Know about Crohn’s Disease

The causes of IBS and Crohn’s disease are not well understood, though factors such as heredity and abnormal immune functioning are suspected. People who develop Crohn’s are more likely to have a close relative with IBS, but many do not.

Some factors believed to influence the development of Crohn’s include:

Crohn’s disease is further classified by which part of the GI tract is inflamed. The five most frequently recognized types include:

This disorder may cause continual inflammation or may be cyclic, going into remission only to return months or years later. The progression of this disease is often inconsistent as well, with some individuals seeing relief as they get older and others experiencing an increase in symptoms.

Crohn’s disease occurs at any age but is most commonly diagnosed between the ages of 15 and 35. Patients diagnosed as preteens may have a more intense experience, and additional symptoms may emerge, such as sores on the skin or in the mouth. Individuals diagnosed after the age of 60 are more likely to have granulomatous colitis, affecting only the large intestine. Those who are in remission from Crohn’s disease are more likely to develop some form of IBS again in the future, but not necessarily the same type.

The inflammation from Crohn’s can trigger fairly wide-ranging gastrointestinal symptoms. The symptoms often vary somewhat based on what type of Crohn’s disease the patient is experiencing. Loss of appetite and abdominal pain after eating are common symptoms of gastroduodenal Crohn’s, ileitis, and jejunoileitis. However, granulomatous colitis and ileocolitis are more likely to trigger diarrhea and rectal bleeding.

Symptoms of Crohn’s disease may include any of the following:

Unmanaged, Crohn’s disease can lead to dangerous complications. These can include infected abscesses, malnutrition, and toxic megacolon. In addition, it’s essential to run tests to rule out other disorders which require different treatments. Diverticulitis, colon cancer, GI infections, and even food allergies can mimic Crohn’s.

If you or someone you love is experiencing symptoms of Crohn’s disease, contact a medical professional for evaluation. In order to initially diagnose your condition, your physician is likely to recommend blood and stool tests. Depending on the results, they may follow up with x-rays, contrast tests, endoscopies, or biopsies.

While there is no current cure for Crohn’s disease, we are learning more about this and other IBS conditions every day. There are several options available to slow the progress of the disease and reduce the number of symptoms experienced. Let’s explore some of these options:

A high-fat diet is frequently associated with the development of Crohn’s, and spicy or high-fiber foods may also aggravate the condition. Reducing the amount of these foods in your diet may diminish symptoms. Including foods with anti-inflammatory properties, such as leafy greens, berries, and green tea, may lessen the severity of symptoms.

Acetaminophen is safe to use for mild pain associated with Crohn’s disease. It is important to note that other NSAIDs such as ibuprofen, naproxen, and aspirin may make symptoms worse.

Corticosteroids, recommended for people with moderate-to-severe symptoms, repress the immune system. This action prevents the immune system from attacking the GI system but may increase the chances of developing other infections and illnesses.

Immunomodulators severely depress the immune system and can take several weeks to take effect. This medication is typically reserved for severe cases of IBS as it can trigger serious side effects.

Resting your bowels may help control a severe flare-up of Crohn’s by reducing the GI system’s workload. Your doctor may recommend a liquid diet for a few days, giving your bowels time to heal at home. In certain situations, intravenous nutrition or a feeding tube at the hospital may be suggested.

Crohn’s disease that doesn’t respond to other treatments may require surgery. Possible surgical procedures include removing polyps, tumors, or fistulas, widening the intestines, repairing intestinal perforations, or re-sectioning the small or large intestine.

Crohn’s disease is a poorly understood autoimmune reaction that causes inflammation of the gastrointestinal tract. The inflammation causes pain and interferes with the process of digestion. Symptoms of Crohn’s disease can range from a mildly upset stomach to severe malnutrition. The condition isn’t curable, but it is manageable.

Those afflicted with this disorder don’t have to suffer in silence and shouldn’t manage their disease alone. Depending on the severity of the condition, your doctor might recommend remedies such as medications, dietary changes, and bowel rest. On rare occasions, surgery is required to relieve symptoms.

Is Menopause Giving You a Stomach Ache?

Elevate Your Smoothie With These Superfood Ingredients 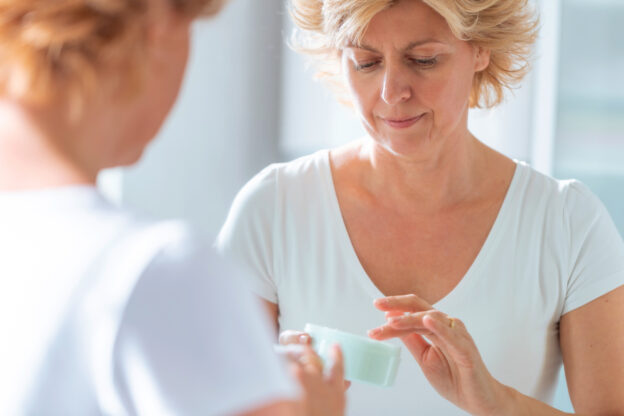 Stress Test: What it Can't Tell You

9 Affirmations to Protect Your Energy