I was lucky enough to grow up in a beautiful part of south central England called the Cotswolds, where my parents still live. The area is a range of green rolling hills and is filled with quaint little villages, historical towns, and stately homes and gardens. They say ‘home is where the heart is’ and last weekend I popped home to see my folks – something I don’t do often enough.

I love going back at this time of year, particularly if the sun is shining. The trees are filled with a beautiful array of colours – golden browns, reds, and yellows and there is a crisp, autumnal bite in the air. One of the things that fills me with great joy when home is going for a lovely brisk walk across the fields, passing wonderful old churches, fresh water streams and the occasional fox-hunt! And, of course, ending up in one of my favourite pubs (a traditional British eating, drinking and sometimes sleeping ‘inn’) for a spot of lunch!

There are so many great pubs in the Cotswolds that is hard to choose; but at least that always provides variety. The pub we chose to eat at last weekend was a relatively new, Michelin-starred hot spot called ‘The Wild Rabbit’, owned by the ‘society’ family, the Bamfords.  Lady Carole Bamford is not only married to one of Britain’s richest men, but she also founded the Daylesford Organic Farm (the Harrods of the Cotswolds), which is just around the corner. 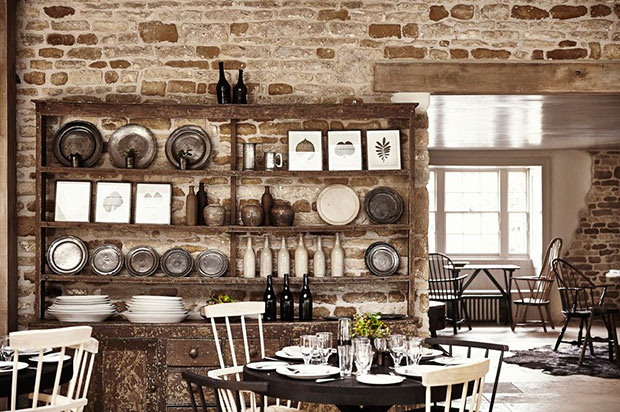 The Wild Rabbit is probably as smart as a country pub can get and the décor is typical of Lady B – rustic chic with a hint of cashmere. Think huge open fireplaces, stone walls, bleached wooden tables, textured neutral fabrics, and candles everywhere.

The first thing you see is the bar, which is very welcoming after a long morning walk. The fires were lit and the newspapers were out.” I think we’re going to be here for quite a while,” I said to The Beard. 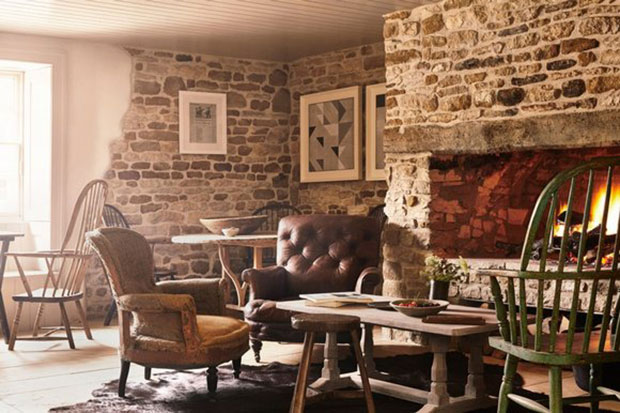 We sat at the bar for a drink, although there are some unbelievably comfy leather chairs, which you could easily lose yourself in. The bar is very well stocked (perfect for a lock-in if it snows) and it hosts a fabulous selection of ales, but I opted for a blackberry Bellini to kick things off.

All the food is organic, thoughtful and seasonal. As it was Sunday, we opted to go straight into the mains and have a traditional roast with all the trimmings. The roast rump of beef was rare and tender; the cauliflower cheese was divine and had a lovely crispy top; the homemade Yorkshire pudding was the best part – firm and perfectly formed, and the roast potatoes were crispy on the outside and soft in the middle.  It was utterly delicious. And I must applaud them for their gravy, something pubs often get so wrong but this one had perfect consistency and taste with a good hint of garlic.  At £22 each for the mains, it would be considered a little ‘punchy’ (the average price one would normally pay in London for a very good roast is around £17) but it was well worth it.

The wine list has a great variety of reasonably priced wines and we opted for a 2012 Argentinian Malbec for £27, which went down a little too easily! It’s a good job we walked there, as we had to spend the rest of the afternoon walking off our delicious lunch.

The Wild Rabbit certainly isn’t a ‘typical’ British country pub.  It’s far too perfect and posh for that – so perhaps not might be everyone’s cup of tea but, in my eyes, it’s a little bit of chocolate box heaven.

Barnsley House is also a really elegant hotel and has its own village pub.
https://www.barnsleyhouse.com/