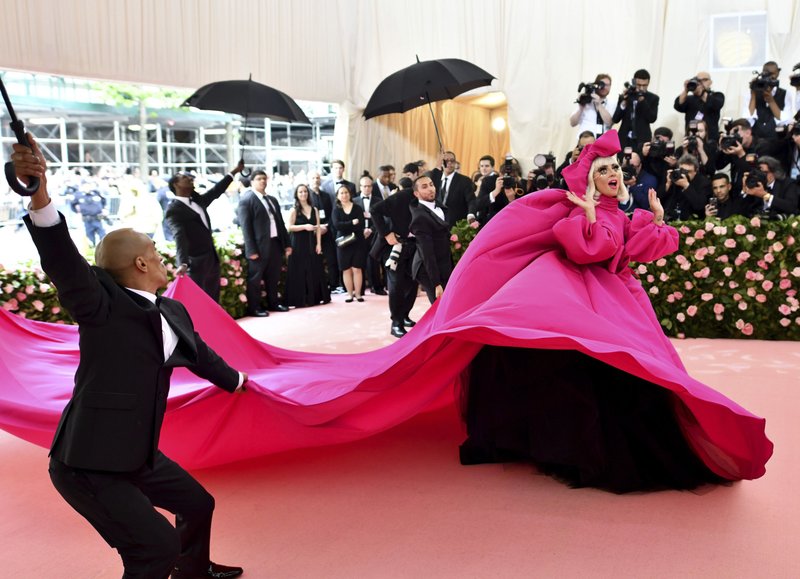 That’s what rapper/singer Cardi B said she was representing at the Met Gala Monday night in her blood-red Thom Browne gown trimmed in thousands of feathers with a crystal-studded breastplate accented by two very large rubies for nipples.

Feminism of such power that the concoction required a team of tuxedoed men to hoist her train and puddle it around her for the photographers. The front of the gown was upholstered to look like nothing less than a vagina. Did I mention that the gown was menstrual-blood red? 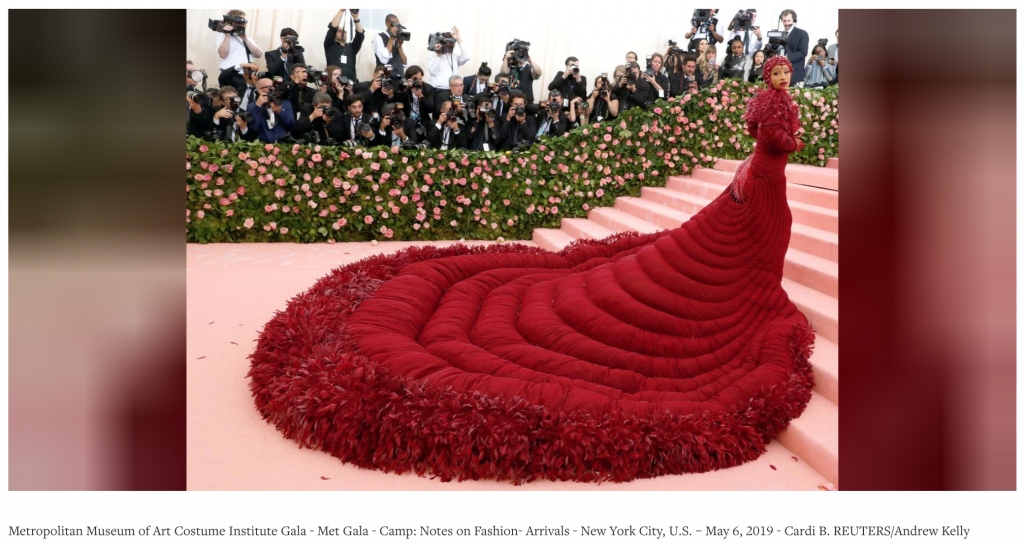 Cardi B was channeling the Metropolitan Museum of Art Costume Institute’s 2019 theme of camp-in-quotation-marks not camp-as-in-Girl-Scouts, as everyone who cares knows by now. But she explained to an interviewer that she wanted a look that was “not too Halloweenish.”

In that she failed, as did almost all of the A-listers we watched on InStyle, Vogue.com, Twitter, Instagram, Pinterest and god knows where else. Consider singer Katy Perry arriving as a large illuminated chandelier by Moschino–and then changing into something more comfortable: a giant (vegan) hamburger. Of course. 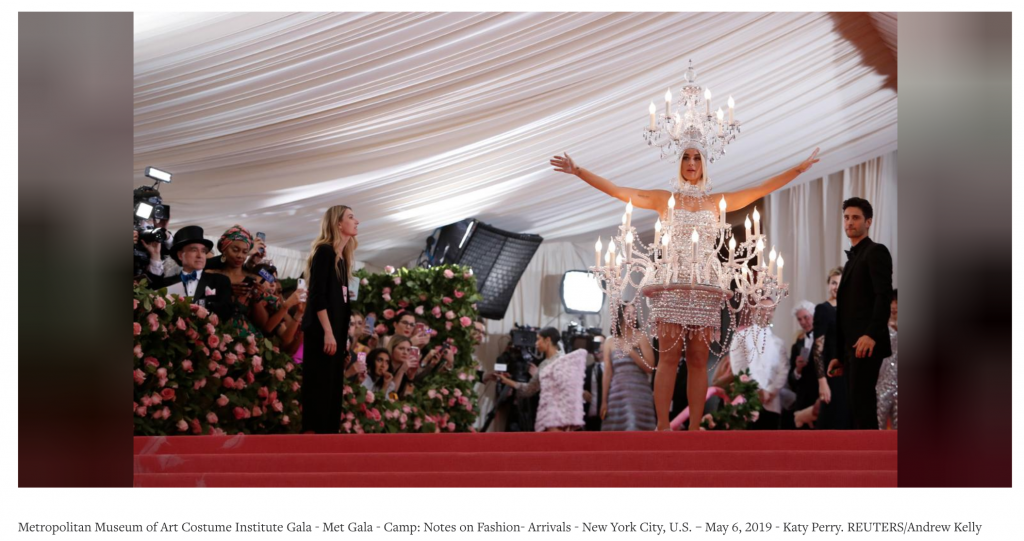 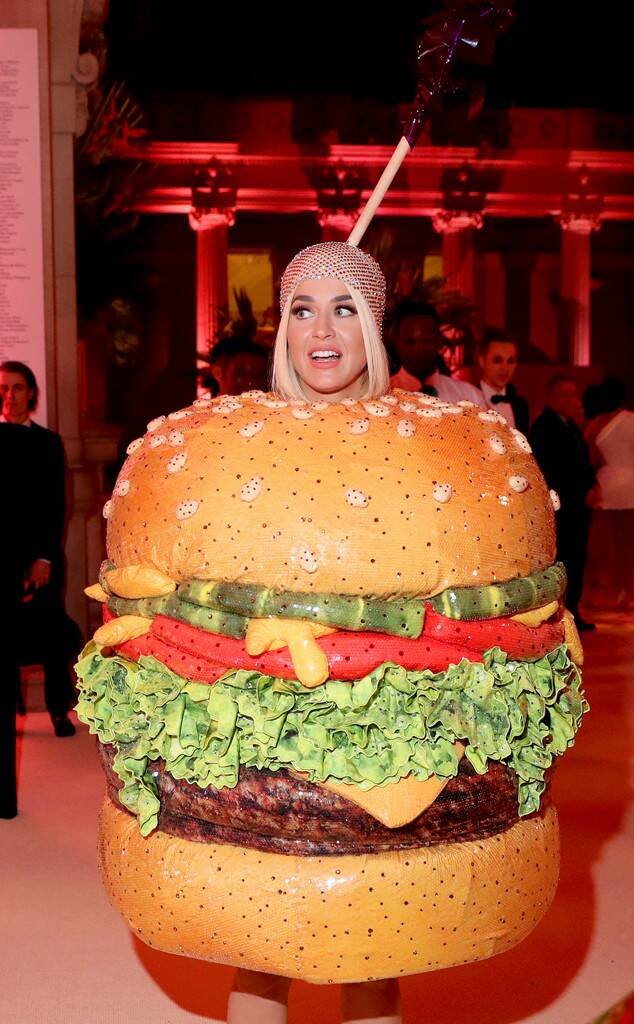 Then there were  designer Michael Kors channeling Elton John; Madelaine Petsch (“Riverdale”) as Tinkerbell; actress-singer Zendaya as Cinderella in a demure ballgown that, with a wave of her Fairy Godfather’s wand, began to glow from the inside; and actor Jared Leto dressed in a rhinestone-decked red Gucci cassock-style gown, looking like a colorful Rasputin, carrying a replica of his own long-locked head (just as the models in Gucci’s runway show did last year—yikes!).

You’ve heard that there are sights that, once seen, cannot be unseen? For me that was Kim Kardashian West nipped into a “naked” dress, her pneumatic boobs exploding bravely over and around the tight bodice, the nude material of the minidress dripping with crystal drops of “water.” The people at Thierry Mugler knew she was a California girl, she explained to one of many interviewers. The goal of the look, completed by wet-looking hair, was to be that California girl just emerging from the sea, water sparkling all over her.

Too bad she couldn’t sit down.

Kardashian-West wasn’t the only one so encumbered. When off-camera, female guests could be glimpsed teetering on their sky-high heels (singer Miley Cyrus said she wore higher heels this year because her new husband, Liam Hemsworth, was there to hold her up). There was a lot of mincing in place of walking. As most of us know, what looks good on camera does not always translate into comfort or practicality.

Benefit participants (because this was, after all, a benefit to raise money for the Costume Institute) had a hard time defining what “camp” meant and how they were interpreting it. I have no such trouble: As a couple of the male guests pointed out, camp has its roots in gay culture and is most frequently expressed as exaggeration. The most exaggerated subject? I would say women, especially famous women. That’s where female impersonators come in, performers who make themselves up as over-the-top Marilyn Monroes, Judy Garlands, Barbra Streisands, all of them gay icons. There was camp well before writer Susan Sontag tried to put her finger on it back in 1964, with “Notes on ‘Camp.’ ” In fact, it goes back to the exaggerated dress of the 18th-century French court (think of the complicated curls worn by both men and women), the cabarets of the Weimar Republic in 1920s Berlin, even back to cross-dressing in ancient Greece.

If any woman can be said to be a female impersonator it’s Cher, who lampoons herself at every opportunity. Cher is of course eternal, but in this recent era, Lady Gaga fills the bill, presenting an exaggerated version of herself in just about everything. She was one of the gala’s hosts and arrived at the fête in a billowing fuchsia coat-dress, then stripped down to a less-billowing black gown on to a long pink sheath and finally to glittery black skivvies, all in the course of her 17-minute-long entrance. Not a trace of that shy, thoughtful singer in “A Star Is Born.” 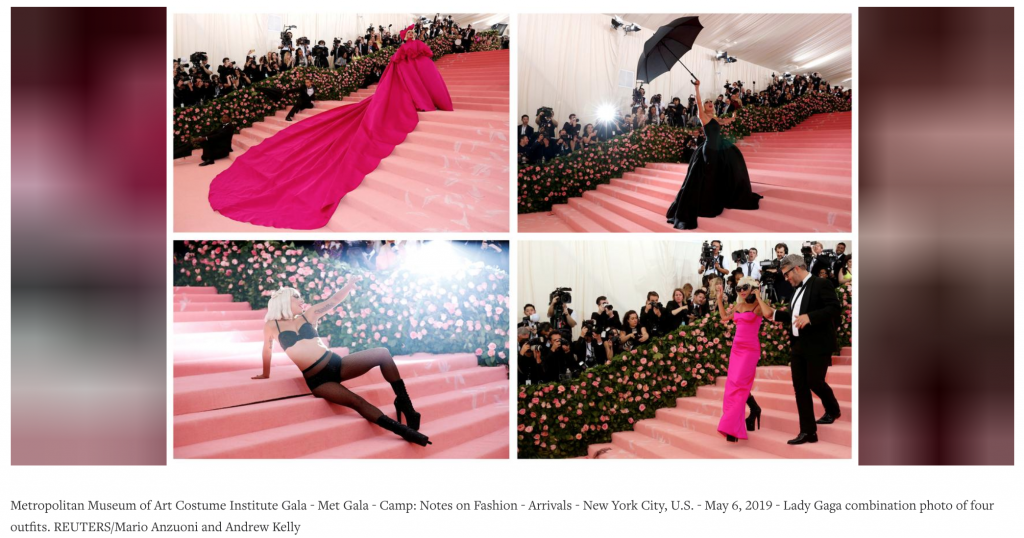 RuPaul, the drag queen known for the reality-show competition “RuPaul’s Drag Race” and certainly a camp icon, credited his sequined wavy-striped trouser suit to Zaldy, who has done his costumes for 25 years.

That credit was important: Most of the celebs cited their designers. Gucci, chief sponsor of the event along with Vogue magazine publisher Condé Nast, came up frequently. As did Moschino, Jean-Paul Gaultier, Yves Saint Laurent, Oscar de la Renta, and others. Some of the participants sat at tables purchased by the fashion houses (the tickets were $35,000 apiece), others are signed to deals as “the face of” a particular brand, some just wore the clothes in return for public acknowledgment. There’s a reason I know that those 44 carats of ruby nipples worn by Cardi B were from Stefere, maker of “rock chic” jewelry and worn by many A-listers: Cardi B told us.

Received wisdom says that this kind of publicity cannot be bought. But of course it can, and is,  most demonstrably at any event where there’s an arrival staging area and lots of photographers. Everybody promotes everybody and the audience (that’s us) is theoretically inspired to get some of those fancy names for ourselves. So, as an enormous, over-the-top, super-expensive event, the Met Gala is a whopping success. And the getups worn by the players are always entertaining.

One thing they’re not is fashion, as in clothing worn by normal people, even wealthy, chic ones (although we may soon see a fresh flurry of feathers in ready-to-wear, based on the sheer tonnage of plumage in evidence on Monday’s Met Gala).

Thinking back to Katy Perry as a large hamburger—and photos of the rapper Lizzo pretending to gnaw at her—it’s worth noting that because of all the red-carpet vamping, the sit-down dinner portion of the evening is always quite short, ending when guests are herded into another area for the evening’s performance. And any number of guests (including The Late Show’s Stephen Colbert) have said they didn’t get enough to eat. Comedian Tiffany Haddish had her own solution to Met Gala Hunger. Stuffed into her sequined zebra-stripe clutch (matching her suit, of course) was a plastic bag filled with fried chicken she brought from home.

I’m not sure if that’s camp, but I think so.

Oh, I almost forgot to mention: the Met Gala, like a tail wagging the dog, is “simply” the opening night for the Costume Institute’s spring exhibition, this year, “Camp: Notes on Fashion.” The exhibit runs through September 8, 2019. Metropolitan Museum of Art, 1000 Fifth Avenue (at 82nd Street), New York, NY.