Flori Roberts, co-founder of Smart Cover Cosmetics, is a remarkable example of an ambitious and successful Prime Woman. She founded Flori Roberts, Inc. in 1965, specializing in products for women of color. Today, the brand sets the industry standard for ethnic cosmetics both in the U.S. and abroad.

In 1985, Flori created Dermablend Corrective Cosmetics, an innovative product line designed to conceal skin flaws. Flori currently is on the board of directors and was past president of ICMAD (Independent Cosmetic Manufacturers and Distributors), an industry trade organization with over 1000 members. She has appeared as a spokesperson for Smart Cover on The Today Show, Fox News, and HSN. I have known Flori for more than 20 years, but through this interview I want you all to get to know her as well.

DP: Thank you so much, Flori for taking the time to share your story with our Prime readers. I am always fascinated with how versatile women are and with how varied their life’s work can be.

DP: Can you describe your career path for our readers?

FR: Although I must have been born with entrepreneurial genes, I came to business through a most unusual route – rather than a MBA, I had a BA in Fine Arts from Carnegie Mellon University in Drama. You see, I always wanted to be an actress and had my head in Shakespeare, rather than economics. However, being in the theatre taught me how to compete, how to have confidence no matter what, and how to market myself to hardheaded producers. There were all traits I needed to start my own business and stick with it through the growing pains and the achievements. Fortunately, I did make it to Broadway when I was recruited from college to replace Carol Channing in a review called, “Lend An Ear.” It was a defining moment, but not enough to last me the rest of my life. After touring in the show, I returned to New York and found that getting an acting job was tough and you often had to wait tables to eat. Not for me. So, how could I leverage my education, my experience, my passion to do something new, and find another career path? First, I decided that advertising was a lot like theatre and found a niche in the fashion industry during the exciting years of American designers like Anne Klein and Liz Claiborne. I learned how to make dramatic presentations and became known for my creative fashion shows. I loved doing it for myself as a consultant. I liked having the control over my life and I was willing to take risks that go with being your own boss. After that, I never worked for anyone again! I moved on and became a promotional specialist in the textile industry working with large corporations like Scott Paper and Dow Chemical. They taught me the important lessons of how big business works within a corporate structure and above all that at the end of the day you must make a profit! In my era, it was not the thing to do – women’s choices were often limited to teaching, secretarial, marrying, and motherhood. I believed that women should have more choices and I wanted more!

DP: How did you come to be in the cosmetics business? Very few men or women go that route.

FR: Again, I took the road less traveled, entering the field of cosmetics. But first, I met and married the most perfect partner, and that changed everything. Craig was a successful physician but he practiced in New Jersey, so, this born and bred New Yorker had to move to the suburbs – it was worth it! While consulting for Dow, I heard several black models discuss how they could not find make-up colors [for their skin tone] and had to mix and match. That was when the idea of a class line for black skin became my entry point into the beauty industry, then dominated by giant companies. In the mid 1960’s, I actually became the pioneer in niche marketing for Black cosmetics, an underserved segment of our population. My husband, Dr. Craig Roberts, provided the scientific expertise because we were determined to produce quality products that would be sold in department stores with knowledgeable black cosmeticians behind the counter. That was my dream and it grew beyond what I ever imagined. Learning on the job, I grew with it and was able to make a difference for my African American employees and my customers.   We withstood competition and other challenges and, even today, the Flori Roberts brand is known as the “first.” 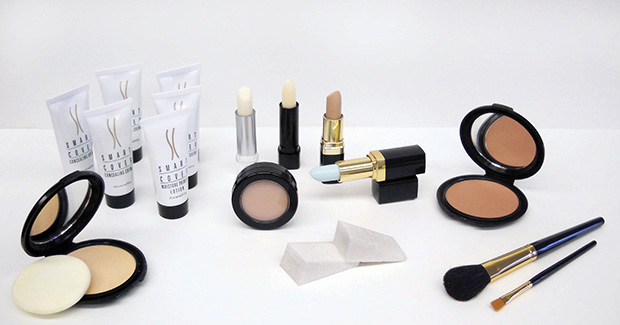 DP: Dermablend is one of your most famous products and has helped many women with serious scars, birthmarks, and blemishes. How did Dermablend come about?

FR: Dermablend actually came second after my black cosmetic line, when in the early 80s, I became another pioneer, this time in Corrective Cosmetics. It happened from a personal, traumatic experience. I developed a deep-rooted basal cell skin cancer on the bridge of my nose (a result of too much sun without protection) and had to have extensive surgery to correct the problem. Of course, being in the cosmetic business, I worried about appearing in public with redness and scarring. My makeup couldn’t cover it, so, I decided to create one that would. With my husband’s medical background, I developed Dermablend to conceal everything from a birthmark to a blemish. I discovered how many people truly suffered from noticeable skin imperfections and was determined to help them face life with a more positive attitude. It was difficult to get department stores to carry the line, but when Ann Landers recommended it in her column, they were besieged by requests and finally said, “Bring it in.”

The demand was great and we continued to build the line until both Dermablend and Flori Roberts, Inc. were sold in 1992 to Ivax Pharmaceuticals. After my non-compete ran out, I helped co-found company No. 3: Smart Cover Cosmetics with my son and daughter-in-law. In late 1999, I launched the Smart Cover-Up Kit on The Home Shopping Network

DP: You were one of the early adopters of marketing your products directly on television shopping networks. How did that come about?

FR: Although Dermablend and Flori Roberts achieved sales growth nationally and globally that went beyond my dreams, it was very costly to do business with major department stores. When I heard how many company owners were successful on QVC in Pennsylvania, I decided to take action. With my theatrical background, I thought I could be the company’s best spokesperson and was willing to bare all to show that our product worked. By demonstrating on air, the show hosts and I started to rack up the sales.

With the ever-changing trends on where and how to sell, Smart Cover is sold exclusively online at www.smartcover.com. [Thanks to e-commerce,} I am loving my ability to be Smart Cover’s Creative Director while living most of the year in Sarasota, I was coined by The Today Show as the quintessential “Grandmompreneur!”

DP: What do you want your lasting legacy to be?

FR: I offer these heartfelt words: It is time for women in America to take their place and be heard as pre-eminent business leaders. We have built businesses generating trillions of dollars in sales. We have developed our own style of management and leadership in the workplace and that difference has definitely been good for business. We must now take the initiative to influence and shape the future of the world economy and to help women of this generation and the next achieve their full potential as a major economic and social force.