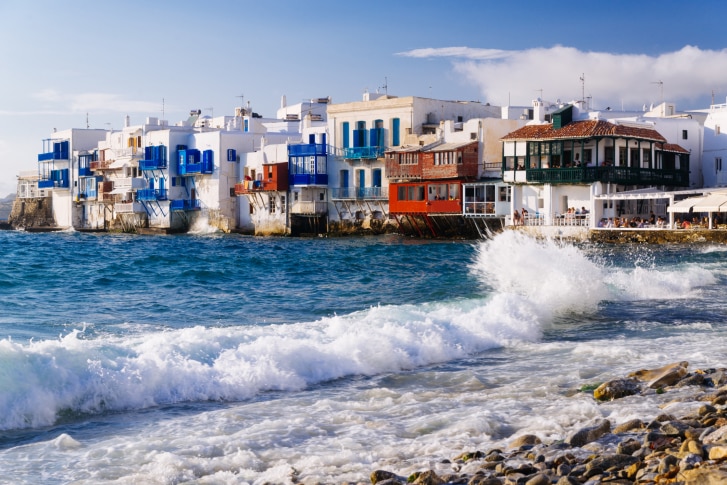 Mykonos – is a charming little Greek island that has been dubbed the new “Ibiza of 2015” and a new firm favorite among the jet set. It has fast become the ultimate glitzy island with its chic hotels and restaurants and attracts all kinds of celebrities and VIP’s. Mega yachts come in their droves and last year the airport even ran out of space for private jets.

Never one to miss out, I thought it best to jump on the bandwagon ASAP before Ryanair (naff British airline) started doing a flight out there 4 times a day and letting any sort of riffraff in (although I did hear the Kardashians are regulars). A week at the Mykonos Grand Hotel seemed a perfect way to start the Summer, so off I went with the Beard.

After a few nights of getting dressed up, I felt the need of some ‘real’ Greek food in a more relaxed environment. We had heard there was a cute little restaurant in the north of the island called ‘Kiki’s Tavern’ where they grill their food on a charcoal barbecue – we decided to investigate.

Situated just outside Chora in Agios Sostis, this place is an institution. Unless you know how to get there…and have a map or an iPhone, you would never find it. Tucked away on the edge of a cliff lies this tiny little shack. With no proper walls or roof, this place really doesn’t look like much…and amazingly it doesn’t even have electricity HOWEVER it is oozing with charm. 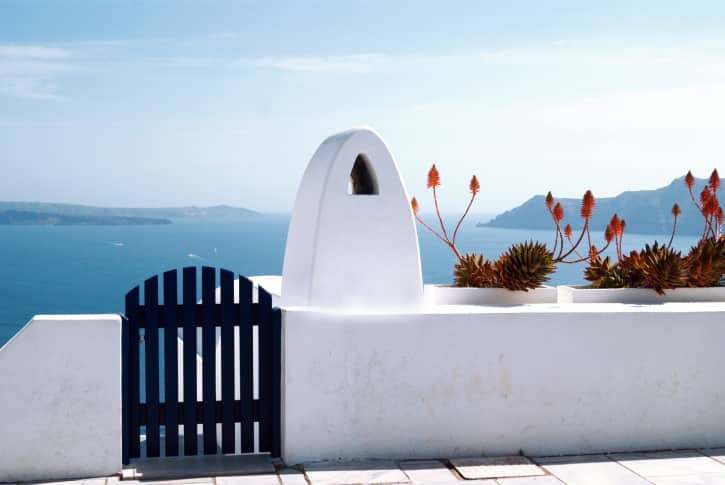 We arrived at 12.30pm as advised (arrive any later and you might end up queuing for a long as an hour). Sure enough there were several people waiting in front of us…or not really in front as there wasn’t really a queue, just a number of hungry customers waiting to be seated and all intrigued to see what all the fuss was about ‘inside’.

As more people arrived there was a sense of uncertainty, how would anyone remember who was first in line, how would the restaurant know we were there….were we just going to be sitting outside all afternoon whilst the eager beavers who arrived for the 12pm sitting, grazed happily on fresh fish washed down with Ouzo?

After about 15minutes, the main man (obviously the owner) came to the entrance and declared loudly and passionately – this is a box of rose wine, here is some ice and here are some glasses – help yourselves everyone, it’s on the house whilst you wait. Immediately the panic stricken faces turned to friendly ones and everyone wanted to make new friends. The owner returned 15 minutes later and gave everyone an order of entry – which was completely correct as to when people had arrived – who knew queuing could be so much fun!

We were eventually led to our little table inside and as we sat down we were presented with the most magnificent view which overlooked a glimmering bay.  We were in heaven. On the menu, there was a choice of various grilled meats – pork chops, chicken thighs and lamb or fish – sea bass, swordfish, octopus, prawns and calamari and a section of sides – tzatziki, hummus, grilled halloumi and eggplant. 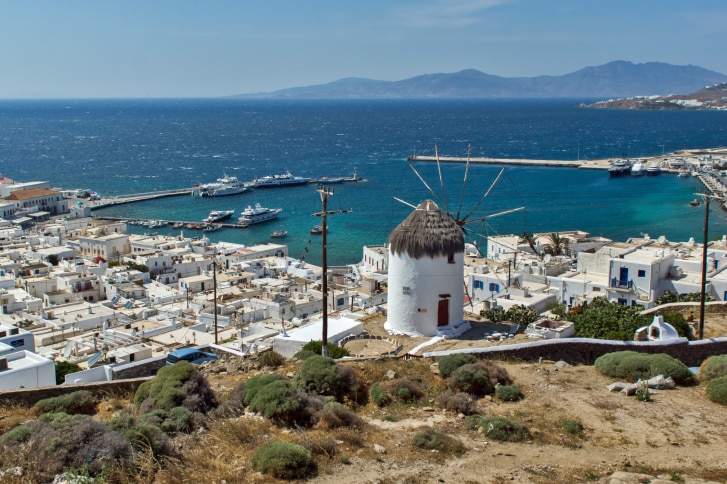 We were to make our way into a small room which contained a ‘salad bar’. It served up deliciously fresh tabboulah, chickpeas with onions and tomatoes, artichokes with Parmesan in a lemon dressing and traditional Greek salad with feta cheese, such an array of beautiful colors. Both of us opted for the pork chop which had been tenderized in a tasty marinade – it was huge but so succulent and juicy and so simple! We shared an ice cold carafe of white wine which was served with really small dinky little glasses.

We could have stayed there all afternoon, relaxing under the trees, sipping  wine and gazing out into the jewel colored ocean, alas we had to get back to reality and back to the UK.