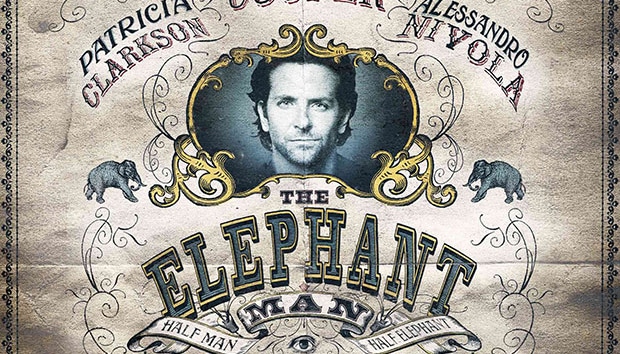 If you are going to be in NYC between now and February 15, I recommend that you see the play “The Elephant Man” at the Booth Theater starring Bradley Cooper in the title role. Cooper is well known for his roles in films like American Hustle, Silver Linings Playbook, and The Hangover movie franchise. Cooper will also appear shortly in Clint Eastwood’s new film American Sniper. He is supported in “The Elephant Man” by the very talented Patricia Clarkson, a Broadway veteran and frequent actor in films like Good Night and Good Luck, Shutter Island, The Green Mile, and many others. She also appears regularly on television in shows like “Six Feet Under” and “Parks and Recreation.” When you see her on stage, you realize that you have watched her many times in several different vehicles.

Also in the cast is Alessandro Nivola, an actor seen often in both Broadway and off Broadway productions, as well as movies. He also had a role in American Hustle, Junebug, Face/Off, Devil’s Knot, Love’s Labor’s Lost, and he will shortly appear in A Most Violent Year, and Selma. This Yale trained drama graduate is a pleasure to watch in whatever varied role he undertakes.

“The Elephant Man” tells the true story of John Merrick, a man turned out by both his family and society because of tremendous deformities of his head, body, and limbs. His mother had given him to a workhouse when he was only 3 years old because she couldn’t stand looking at him, and eventually, he ended up in what was called at the time “a freak show,” where people paid a few pennies to gape at him and jeer at his appearance. There, he was discovered by Dr. Frederick Treves who took him into a prominent London hospital and gave Mr. Merrick, for the first time in his life, a decent home and a rudimentary education. Dr. Treves discovered that Mr. Merrick was quite intelligent and was eager to learn all that he could from the Bible, all books really, and to meet people so that he could better understand the way they thought and acted. He ended up developing extraordinary social skills and friendships in all levels society.

In the play, Mr. Cooper is never made up to look like “The Elephant Man” rather, actual photos of John Merrick taken by Dr. Treves are projected as slides in life size, but Cooper does assume the twisted position of Merrick’s physique. Also he contorts his face a bit to suggest the difficulty that Merrick would have had in making others understand him. Bradley Cooper does an excellent job in this role of depicting the terrible loneliness and fear that Merrick experienced during his life. He also shows the grace that he developed when his everyday needs were met by Dr. Treves generosity and skill at arranging a life for Merrick in a protective environment.

Merrick’s is a fascinating story, and while some of my friends found the play to be depressing, I discovered that I found it to be truly uplifting. To me, Merrick overcame so much and became so adept at taking full advantage of every opportunity offered to him that I ended up being inspired by and really in awe of him. Yet, he didn’t accept his good fortune without honestly questioning the cost to his soul and to the souls of others. As with all good plays, you will leave the theater with much to think and talk about for days to come.