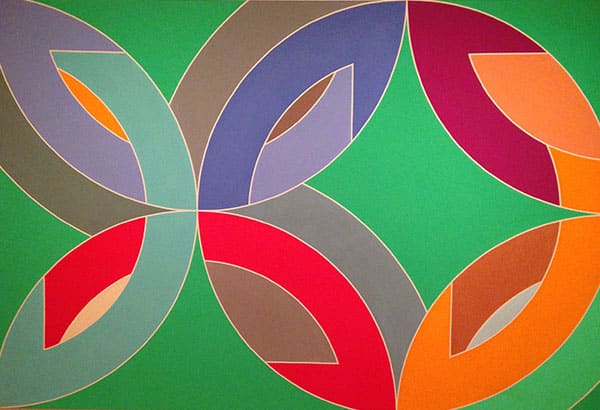 Visiting museums in your backyard is sometimes overlooked. Now is the time to go to the backyard. It’s even more valuable to me when a major retrospective art exhibit is in the backyard. Frank Stella is one of the most important living American artists. This month I traveled to Fort Worth to visit the Modern Art Museum’s Frank Stella: A Retrospective. It is known informally as “The Modern”. The Modern Art Museum of Fort Worth is located at 3200 Darnell Street, Fort Worth, TX 76107. 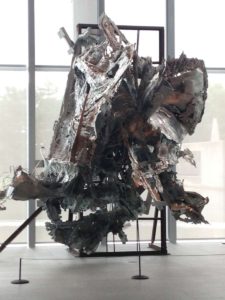 The Modern building “seems to float on water.” “The Modern Art Museum of Fort Worth’s building was designed by the Japanese architect, Tadao Ando. Ando’s design, which embodies the pure, unadorned elements of a modern work of art, is comprised of five long, flat-roofed pavilions situated on a 1.5 acre pond. The desire to use diffused and reflected natural light within the gallery spaces was a major influence on the building’s design. Immense cantilevered cast-concrete roofs shade the building’s exterior and accommodate the introduction of natural light into the gallery spaces by supporting sophisticated systems of continuous linear skylights and clerestory windows.”

This museum is a special treat nearby. “The collection of the Modern Art Museum of Fort Worth is comprised of nearly 3,000 objects including paintings, sculptures, videos, photographs, and prints. The majority of works in the collection are dated between 1945 and the present. All major, international movements are represented including Abstract Expressionism; British, German, French, and American Pop; Color Field Painting; Minimalism; Conceptualism; Post-Minimalism; New Image Painting, and Neo-Expressionism. Pop and Minimalism are particularly strong, as is German art of the 1970s and 1980s.” 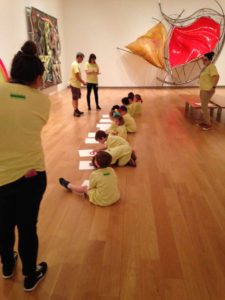 Attendance is highest on Saturdays and Sundays. The restaurant, Café Modern, informal music concerts, and art films are also big draws. If you like a quieter museum visit, attend on a weekday. Be aware – school children may be present on a field trip.

“The Modern is located in Fort Worth’s celebrated Cultural District, directly opposite the Kimbell Art Museum, designed by Louis I. Kahn, and near the Amon Carter Museum, designed by Philip Johnson.” The Modern Art Museum of Fort Worth is the oldest art museum in Texas and one of the oldest museums in the western United States. The Modern was chartered in 1892 as the Fort Worth Public Library and Art Gallery, but the name and mission have evolved over the years. It changed in 1901 to The Carnegie Public Library Art Gallery and changed names many more times until 1987 when it became known as Modern Art Museum of Fort Worth.

The art is exquisite from the permanent collection and the current rotating exhibition, Frank Stella, which is available until September 18, 2016. I especially want to point out that the Frank Stella: A Retrospective was my favorite because you walk into his world of art when you see these larger-than-life paintings on the walls. I highly recommend a trip to Ft. Worth to see this gem of a show including 120 works by Frank Stella in various media – paintings, reliefs, maquettes, sculptures, and drawings. I value his use of color, scale, and design to create a sense of space like no other. Frank Stella pushes painting to a level rarely experienced. He heavily influenced the minimalists with his approach to painting sculpture.

It’s useful to read the art critic’s opinions about these exhibitions. Like Frank Sinatra who sang “My Way”, Frank Stella is accused of doing something similar:

Roberta Smith, New York Times, says “Frank Stella is back. The show provides an overdue update on the mythical, maligned artist who has adamantly done it his way.”

“The totality of the show can make the mind reel with ideas, insights and arguments. Many of these are fomented by an installation that is alternately dazzling, oppressive, and nuts. It surrounds us on every side with the sheer physical invention of Mr. Stella’s art, and his drive to use the latest materials and tools, including the computer, and to constantly challenge ideas about what painting can be. He first abandons painting’s four-cornered canvas, then its flat surface, and sometimes the wall — and yet, from time to time, he returns to them all.”

“The exhibition has been organized by Adam D. Weinberg, the Whitney’s director, and Michael Auping, chief curator of the Museum of Modern Art of Fort Worth, working closely with Mr. Stella. Their inspired idea was to make the presentation generally chronological while also jumping around in time, sometimes juxtaposing pieces up to 20 years apart to create stimulating clashes of color, form and process.”

Another favorite stop in the museum is the gift shop to check out the exhibition catalogue. It is usually written by experts in their field and museum professionals with strong art history backgrounds. My last blog shared some highlights into the Frank Stella: A Retrospective exhibit catalogue when it was previously reviewed in NYC.

Whether you are a casual observer of art, a dedicated student studying art, or a lover of all things visual, visiting art museums where you live can tantalize your senses on many different levels, as if you are far away from home. It is well worth the time to visit the visual beauty in your own backyard on your stay-cation.