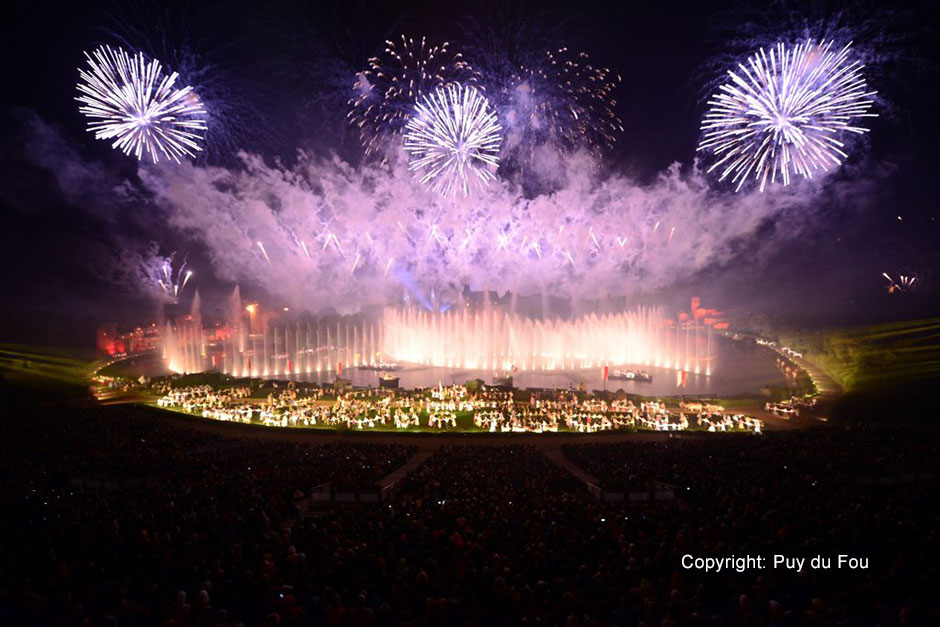 Impressive new attractions open every year. In 2018, Le Mystère de la Pérouse displays the adventures of the french explorer aboard his ship La Boussole. All the performances are visually stunning and each one deserves to be seen several times. In fact, the park is so large that one should spend a minimum of two days to enjoy everything. This August though, it isn’t the latest show that made it into US news reports, but the crows.

One of the most spectacular shows at Le Puy du Fou is Le Bal des Oiseaux Fantômes, where visitors can admire trained birds of prey soar through the air around them. In fact, not only birds of prey. For years, other species such as crows, storks, ibis and even a marabou also charm everyone by their agility and understanding of commands. At times, hundred of birds fly above visitors’ heads, all at once. It is a perfectly choreographed ballet for the pleasure of the eyes. And this year, in addition to their performing job, some birds have another mission.

Christophe Gaborit, master falconer, has trained 6 rooks (corvus frugilegus) to pick cigarette butts and other small litter around the park, in exchange for a treat. The birds, Baco, Bambou, Bill, Black, Boubou and Bricole, have become quite famous because of this new task. So much that park staff now makes sure that visitors don’t toss garbage around the birds, only to watch them tidy up.

The park has been kept very clean since its creation and takes pride in its outstanding welcome, tidiness and general appearance. Park president, Nicolas de Villiers, hence considers that these 6 rooks are mostly here to show that “nature itself can teach us to take care of the environment.” And that we, humans, should take them as an example!

Attractions Based on French History

At the Bourg 1900, the scenery is entirely different. Here, shops sell toys and candy, children and adults enjoy the ancient carrousel in the light pre-WWI atmosphere. Restaurants welcome visitors, who may enjoy a hearty meal while watching dancers or fake firemen trying to extinguish a fake fire (Bal des sapeurs). 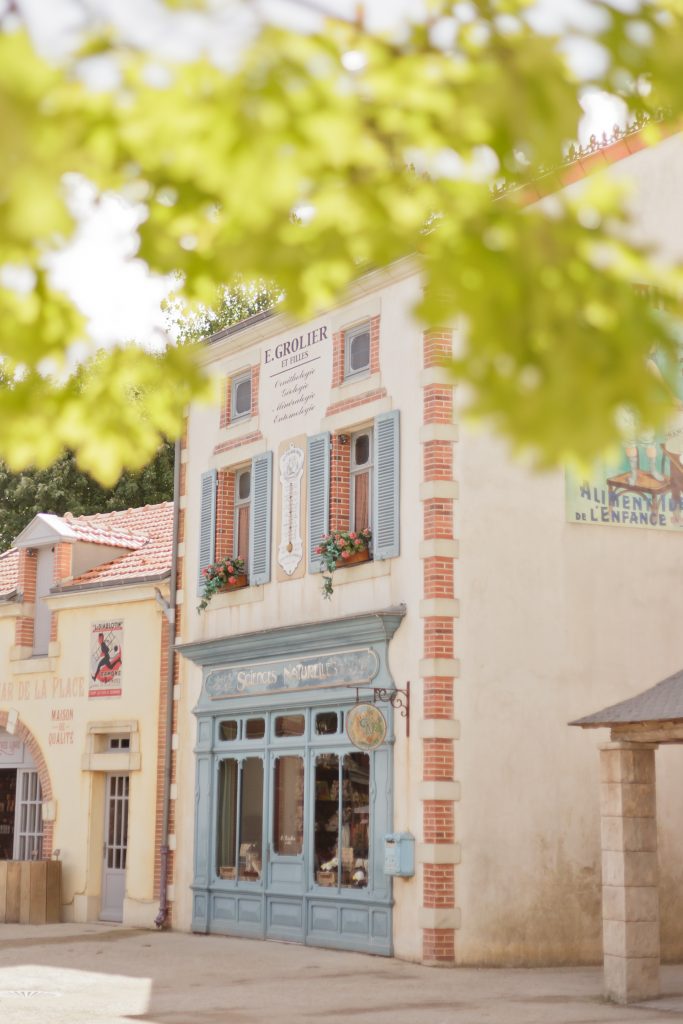 This amusement park accommodates many family-friendly attractions. Most of the older ones take place outside, while newer ones are located in large buildings. Set in beautifully designed settings, each show revolves around famous characters, events and time periods. The park covers French history from the Roman times to the 20th century. Some shows are universally European, such as the Roman games, the story of Merlin and the Round Table, or WWI.

Thanks to the story of a French officer, even the American Revolution is featured (Le Dernier panache). Other presentations focus on events and characters that are uniquely French: Joan of Arc, La Pérouse, and La Fontaine’s fables. Yet, these stories are only a background to History, known to most of us, and to jaw-dropping sights. Below are some of the favorites.

Be a Roman and Go to the Amphitheater

Children love Le Signe du Triomphe, which takes place in a pseudo-Gallo-Roman amphitheater, seating 6,000. Even before the beginning of the representation, visitors are transported back to Antiquity, to the Colosseum and the Circus Maximus in Rome. 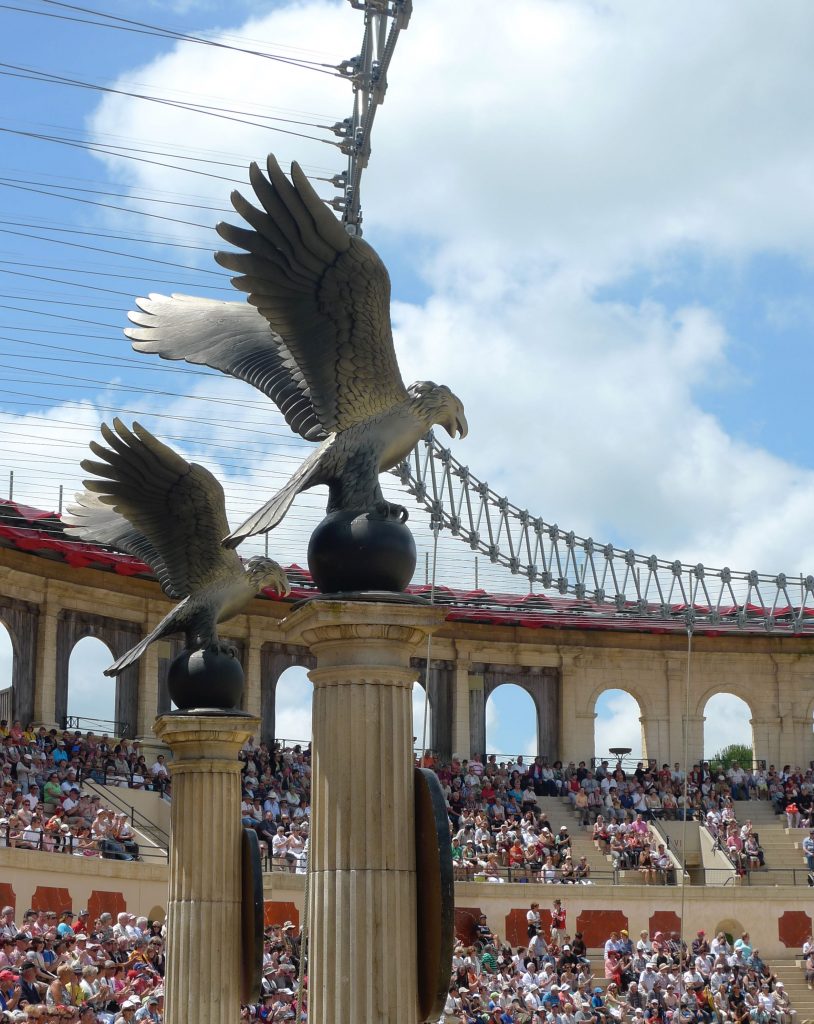 All over the park one notices the great attention paid to details. For example, at the amphitheater, a velarium descends to protect spectators from the sun. See the poles and the audience seating in reddish shade in the photo. The audience has an active part and must choose between the Roman occupation or the brewing Gaul rebellion. A parade of human and animal actors, including a flock of amusing waggling geese, introduces the show.

Then, Roman sport events follow one another: an impressive chariot race, gladiator fights, and finally, tigers and lions.

Fast forward to the Viking devastations of French countryside and villages. This smaller venue presents Les Vikings. This show is packed with live action, fireworks and even a Viking longship rising from the bottom of the lake with warriors on board. Thatched roofs and wooden buildings catch on fire, so close and so real that the heat warms spectators’ faces. Stunt-riders furiously drag their victims behind horses. The attack is swift and powerful. Villagers are terrorized, yet ready to fight against the invaders. Will they be able to push back the cruel Vikings? 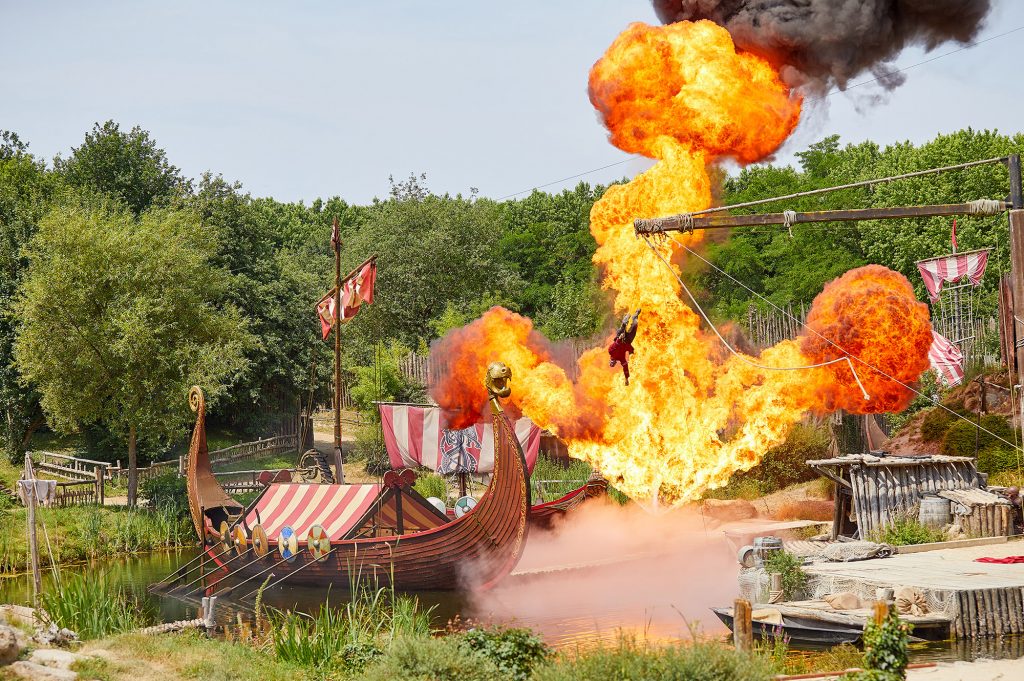 The Secret de la lance revolves around Joan of Arc. In this story, the French heroin comes to request the help of Le Puy-du-Fou knights in order to take back Orléans from the English invaders. The stage is set for jousting and a fantastic medieval tournament, which astounds 21st century tourists in the same way they probably delighted the public during the Middle Ages.

In addition to the talented horses and riders performing in front of us, the attack on the old castle, its catching on fire and destruction, will dazzle everyone. 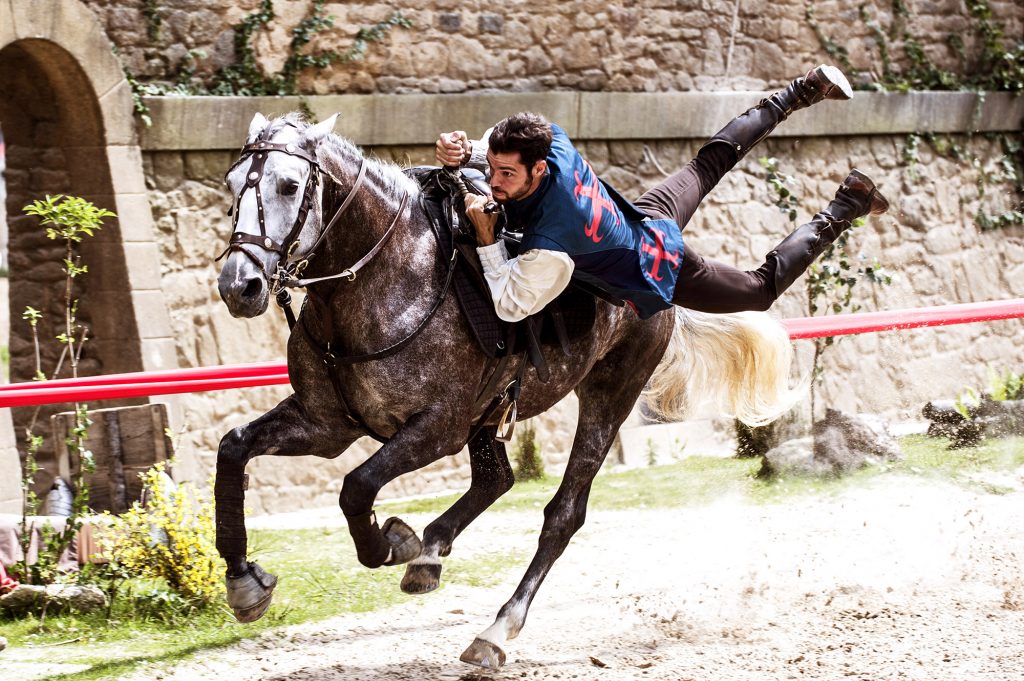 The Mousquetaires de Richelieu show is beautifully designed around dancing. Graceful horses and flamenco dancers take the stage, after a lively fencing demonstration. 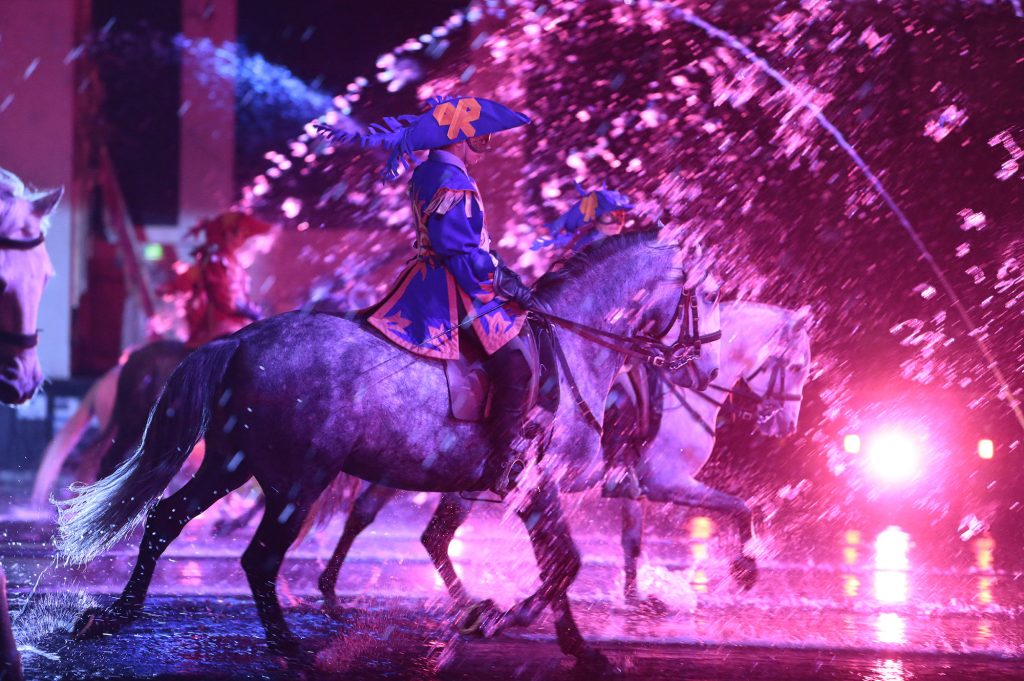 After having flooded the stage, water becomes alive under the feet of artists. Catching the light exquisitely, tiny drops create a new dimension in which dancers and horses perform. 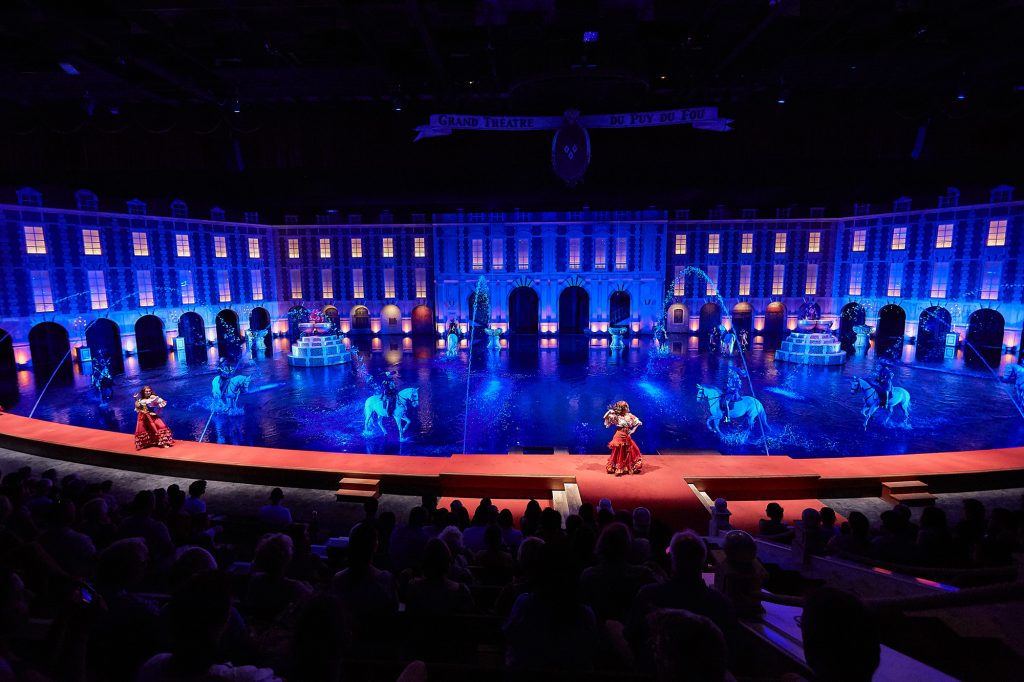 Sitting in the middle of the theater gives a good general view of the spectacle. On the other hand, the front row is so close to the stage that it allows one to see the gorgeous details of the costumes, and of course the fabulous flamenco moves of the dancers. This night show telling the story of the Puy du Fou castle is the origin of the park. In 1778, all the actors were local inhabitants, coming to partake in this grand adventure every weekend of the summer. The Grand Parc was created around it, due to the enormous success of the Cinéscénie.

Nowadays, the show has evolved into a much more impressive experience with professional actors and animal trainers, in addition to thousands of volunteers. Music, lighting effects, 3-D effects, fireworks and stunts enhance the experience. Nevertheless, the essence of the show, and of the entire park for that matter, has remained the same as at its origin: tell History through stories.

Don’t forget to reserve this show or you won’t be able to attend.

Your Stay at the Park

Restaurants in the Park

While the park has several areas set up for picnickers, there are also many restaurants, located in every village. At each venue, management has tried to pair the style of the food with the historical period the restaurant refers to. Some offer a simple fare or take-away, so visitors don’t waste time eating and experience as much of the park as possible. 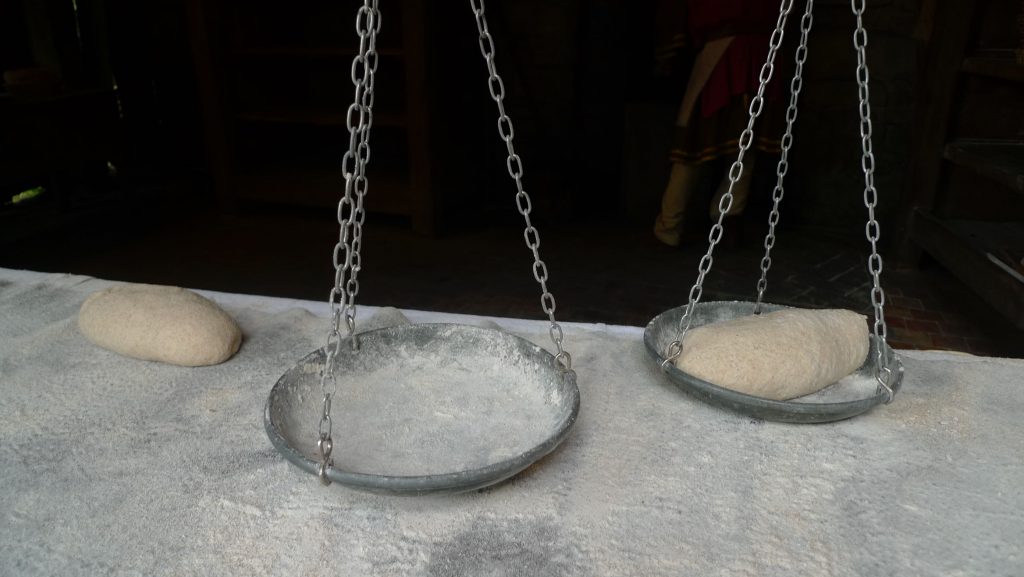 At other locations, such as the Café de Madelon, guests can enjoy a show while having lunch. Some good stops are L’Estaminet, for the Préfou garlic bread, l’Echansonnerie for some Renaissance-inspired dishes, and the wedding meal at Le Café de Madelon.

Hotels in the Park

Because many visitors spend two days at the Puy du Fou and decide to watch a night show, many decide to spend the night at one of the hotels in the park. They choose their hotel according to their favorite time period: Roman Gaul, 18th century France, or different medieval and Renaissance times.

Each location is completely original and will delight you and your family. Here you can sleep in a 13th century fortress, under the tents at the Camp du Drap d’Or, or in the lake village of Iles de Clovis.

Centered around French history, Le Puy du Fou may not interest foreign tourists as much as it should. While the shows are indeed in French, foreigners can get audio sets that translate and help them to perfectly understand the stories. Stages and stories are fairly historically accurate, yet this is entertainment, with stunts, and fireworks. Everyone, even young children without much historical knowledge, will appreciate the horse races, bird shows and pyrotechnics.

The park is only open during the summer months, this year until November 4. One should thus reserve their stay several months in advance, both for the hotel and the Cinéscénie. Reservations for 2019 are already open.

The downside of this park for a foreign tourist might be its location. It is indeed located about 4 hours southwest of Paris, in the Vendée département. However, this is the perfect opportunity to leave the beaten path and go explore this part of France. There is a lot to discover in this area, between Nantes and La Rochelle. This region is becoming more and more active with tourism, because of the dynamism and ingenuity of the inhabitants. If you go there, don’t miss the Machines in Nantes and experience the Hermione at its harbor in Rochefort.