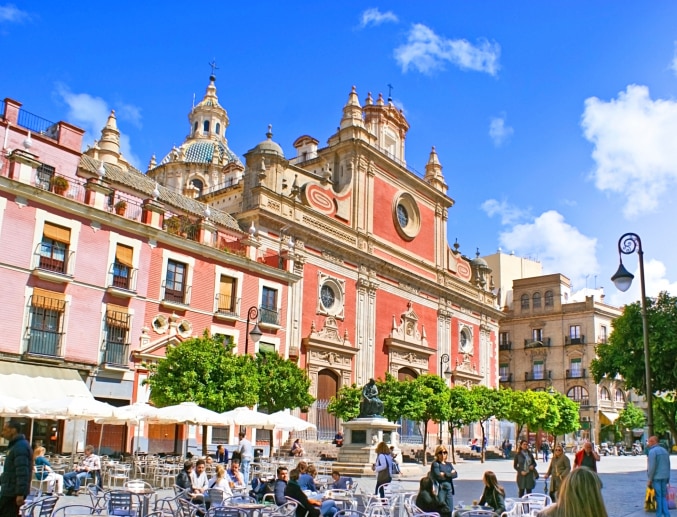 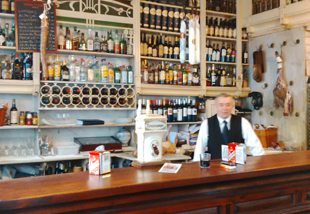 Seville – the city of oranges, bulls, tapas and seriously scary flamenco dancers. It is the capital and largest city of Andalusia, Spain and, from what I had heard, it was also utterly beautiful. The Beard and I decided we would pop over for a long weekend of eating and drinking with a bit of sightseeing thrown in.

Normally, I am fastidious about booking restaurants during a holiday, but on this occasion I had the idea that things in Seville would be a little more laid back and filled with tiny tapas bars on every corner. Although I hadn’t actually booked any restaurants, I still did enough research to know where the best ones were and we didn’t find getting tables at them to be too much of a problem.

I settled on two favorite places (out of what seemed to be about 30 visited during our visit) that we ate at. The first was a place called ‘Casa PepeHillo’ which is right next to the Bull Ring in El Arenal.  I had read an article about a matador here called Ángel Luis Carmona. Matadors are treated like movie stars in Seville, and Ángel certainly looks like one. Apparently this is his favorite place to eat and we decided, what better advice to take than from such a revered local.

Inside it is full of tradition, character and has more bull’s heads on the brick walls than you can shake a ‘capota’ at. It is dark and cool, a perfect place to escape the midday sun as well as the hordes of tourists that fill the streets. Their specialty is pork loin cooked in whiskey, which was delicious and buttery and very rich in flavor. We also tried the ham croquetas, which are creamy inside and crunchy on the outside; spinach with chickpeas which was deliciously garlicky; eggplant gratin, bubbling with cheese on top; oxtail stew and tortillas in salsa. Every visit was special (we made several), and the fact that the food was so reasonably priced, around €4.00 per portion, was an added bonus. 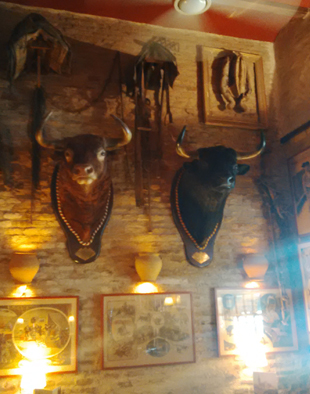 The second place, ‘Eslava,’ was more for foodies with a combination of more traditional and modern. It was also one that I thought I had done well to find – which is perhaps what all the other tourists that were there thought about this back street local that is tucked away behind a buzzy square. However, the fact that it wasn’t full to the brim with locals didn’t stop us from having a great time and enjoying some sensational food.

There are two parts to Eslava, a smarter restaurant with white table cloths and tables inside on the right and then a more casual tapas bar with tables inside and out to the left. Both were buzzing with people.  Because we hadn’t made a reservation, we waited patiently at the bar, sipping delicious red wine and picking at beans until a table became available outside in the street. This particular evening we decided to have dinner in just one place instead of trying two or three in true tapas tradition. We had black pudding with caramelized onions, which was not something I would normally go for, but it was really smooth and almost silky; roast pork ribs in a rosemary honey glaze which were so tender they just fell off the bone; tenderloin steak in a blue cheese sauce from northern Spain that was insane and probably about 5000 calories per mouthful but so good; more ham croquteas, which were obviously a favorite of the trip; and green pepper stuffed with hake which was heavenly. We drank wine by the glass and the bill came to around €30.  How they can serve such great food and charge the prices they do, I am not sure, but I would happily have paid more.

The restaurants were different in their own way, but we enjoyed them both immensely. And after spending a wonderful few days in this colorful, beautiful and romantic city it was time to head back home and get back in that gym – after all that tapas, I think we needed to!