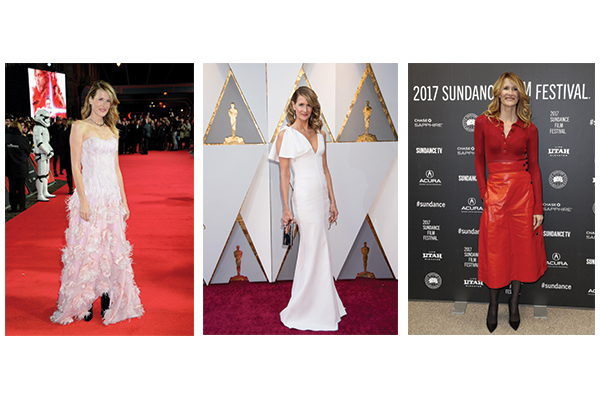 IT’S HARD to imagine an actor, let alone a female actor who recently turned 51, who has had such a good run in the past year: “Star Wars: The Last Jedi” on the big screen and HBO’s “Big Little Lies,” for which she won a Golden Globe for her performance as Renata Klein. (The series is slated to return in 2019; we can’t wait.) And let’s not forget she also played Diane Evans in the TV revival of “Twin Peaks.”

Most of us aren’t under the critical eye of the public, so maybe we can learn something from a woman who must constantly dress for an audience, on the red carpet and even on the street.

NANCY: The fashion industry is more to blame for this unfortunate outfit than Dern is. Bottega Veneta showed it for Spring 2017, but at least Dern had the good sense to wear a bra underneath the semi-sheer top! (The runway model didn’t.) I guess small-busted women can get away with this visible-underwear look, but really, must they? Teens and tweens, maybe; grownup girls, not so much.

JANET: Dern looks great in this color. And that’s about the extent of my compliments. I agree with Nancy about the wisdom of wearing a black bra under a sheer knit top. But also, what’s up with this ill-fitting shiny leather skirt? It makes me think Bottega Veneta should stick to its knitting—fabulous handbags.

KATHY: Bleh. The skirt looks like plastic to me, and to my eye the reds simply don’t work together. And, like my co-LittleBirds, I just don’t get the impulse to bare the bra. However, I’ve always been charmed by Dern’s quirkiness. She makes me think of the girlfriend who’s always falling to pieces, but in a good off-the-wall way. Perhaps her innate quirkiness got the best of her with this ensemble. NANCY: I think this Jonathan Simkhai dress is an example of a grownup girl adapting the skin-is-in trend without sacrificing her dignity. All those little slits in the knit ruffles suggest skin rather than really exposing it. (Maybe it’s even a bit too demure, but it’s certainly elegant.) Of course, Dern doesn’t have an ounce of fat on her, but it’s the kind of illusion many of us could seek out. (In which case, the dressing room mirror will be your best friend—and your cellphone for that all-important rear view!)

JANET: A very flattering silhouette. No obvious bumps or lumps. Good shapewear probably helps, but then again, so does a well-toned body. I like the ruffles; they’re fanciful and feminine. But those little cutouts are overkill in my book. And those shoes, Laura, they are just wrong with this dress.

NANCY: Yikes, now that you point out the shoes, Janet, I gotta agree. In fact, I doubt those shoes look good with much of anything. They look like elves’ slippers.

KATHY: The cell phone thing never occurred to me!!! Genius. I think this dress is rather sweet and matches Dern’s expression. But like Janet, I’m not wild about the cutouts. Although these are the least offensive cutouts I’ve seen, and I give Dern props for that choice. Although it does look a bit like the dress is melting. I blame Donna Karan for this cutout mania. And I’ll never forgive her. The cold-shoulder gown Karan did for Hillary Clinton in 1993 is the first time I remember the cutout cutting in. It’s such a gimmick, in my opinion,  and I’ve yet to see an attractive example. Harumph! NANCY: Elegant without a loss of comfort, now there’s a worthy goal. I think it’s the pale monochrome tone here that elevates this trouser suit to the level of “dressy.” My only quibble is my usual anti-pussy-cat-bow stance. Those “self” ties probably look fine when you first tie them looking in the mirror; after that, it’s all bets off. They droop, they untie, they head south when you’re heading west—you get my point. Why not a simple necklace, elegant or sporty?

JANET: Not a bold look, but one that I think a lot of us could see ourselves wearing. I’m with Nancy about the lovely pale pink color of the pantsuit. And the cut is perfect. The wisp of a bow around her neck doesn’t detract and doesn’t make her look dowdy like one of those big pussy bows can. It’s just a flowy strip of fabric that softens the lines of the suit.

KATHY: I love this suit. Dern looks so pretty in pink. Her shoe choice is perfect. The neutral pumps and stockings finish the look perfectly.

Laura Dern, arriving on the Red Carpet for the 90th Oscars® at the Dolby® Theatre in March 2018. Credit: Michael Baker / A.M.P.A.S.

NANCY: This gown is classic Hollywood glamour! I can just see Carole Lombard in it–in fact, I think I have, but it was a shiny silk satin, if memory serves. Here’s one time when I think the flutter of a sleeve really works. A lot of us could make that work–though I don’t think many of us grownup girls want to slit the bodice quite down to THERE!
JANET: The “Big Little Lies” star and Academy governor stole the 90th Academy Awards show (where she was a presenter) in this clean, crisp dress designed by Raf Simons for Calvin Klein couture. The fitted but easy-going shape fits Dern’s lanky body; the bell shoulder on one side works because it draws the eye to her face and sexy-looking Veronica Lake hair. Jewelry by Atelier Swarovski and a mirrored clutch are the only accents for the streamlined, minimal silhouette. Well done.
KATHY: Oh, she looks so pretty! So girly. So glam. I’m definitely not a fan of those peek-a-boo shoulders a la Donna Karan, but this dress boasts something altogether different and I’m totally on board. Love those fluttery little wings. I wonder if it would be overkill to dress both shoulders that way. Too much maybe? NANCY: This frothy confection is from Alexander McQueen, but this kind of Cinderella-at-the-ball dress drives me crazy. Maybe the wearer feels as though she’s in a fantasy, but I find the look infantilizing. (And I seem to have been the only woman on the planet who didn’t love the Jason Wu gown Michelle Obama wore at the first Obama inauguration either—all those little tufts of things stuck everywhere.) All that said, the line is lovely, and Dern looks gorgeous in it. But whatever that black is down under the gown—black boots? black shoes and hose?—I don’t think it bodes well.

JANET: You’re not the only one. I didn’t like Michelle Obama’s Jason Wu gown either. I like this McQueen worn here by Dern just about as much. And, those boots. Ugh.

KATHY: Oh come on you guys. I think it’s pretty. Infantilizing, really? It just strikes me as very feminine. And I don’t mind a little froth from time to time. Don’t really get the boots, though. I’d like to ask her about those.

Stepping Into Fall in Our Favorite Shoes

Glam Up Your Bedtime Attire

Chic Pieces For Your Fall Wardrobe

Our Favorite Cashmere Sweaters Of The Season

Best Western Jeans for Women over 50

The Best Black Leggings For Women Over 50