Relaxing in the English Channel Islands

Off the Cotentin Peninsula in Normandy, several small islands compose the archipelago of the English Channel Islands. They have managed to keep their cultural identity and specificities until now. Indeed, they are not part of the United Kingdom: they have been Crown dependencies since 1204, when mainland Normandy entered the realm of France. They also have never been part of the European Union. They print their own currency. Although one can also use the British Pound here, shopkeepers give change back either in British Pounds, Jersey Pounds or Guernsey Pounds. Of course, everyone speaks English here, yet the ancestral language is Jerriais, a close relative of the Norman dialect.

Visitors can use ferries to get to all the islands. The two main companies are Condor ferries from both France and Southern England, and Manche Iles Express from the Cotentin Peninsula (France). Both companies also offer inter island hopping. Alternatively, one can fly to Jersey airport (JER) from England and several European locations.  Guernsey (GCI) and Alderney (ACI) also have very small airports with a few flights.

Jersey, located only 14 miles from France, is the biggest of the English Channel Islands (45 square miles). The ferry trip from France lasts less than 1.5 hour, whereas it takes at least 4.5 hours from Southern England. To fully enjoy the island, consider spending at least 2 or 3 days here.

The climate is very mild on the English Channel Islands. Spring usually starts early and flowers bloom everywhere on Jersey. Every year in August, flower-covered floats parade in the streets of the capital Saint-Helier during the Battle of Flowers (purchase tickets in advance).

WWII legacy: the Channel Islands were the only part of the United Kingdom occupied by Nazi Germany, from June/July 1940 to May 1945. In fact, Allied Forces didn’t think it necessary to liberate the islands, and the German army remained in charge until the reddition on May 8, 1945. The Jersey War Tunnels are probably the most impressive WWII site to visit on Jersey.

The Central Market (late 19th century), located in Beresford street, is an important landmark: one can buy fresh produce, meat, fish and flowers, in a Victorian indoor market place. Don’t miss the impressive fountain in the center. Saint-Helier is also a great place to shop: luxury boutiques, local stores and gold jewelers surely will have something to tempt you. While shopping, explore the old city center, sample street food and enjoy the sights!

The English Channel waters are cold, even in the summer but the beaches all around the island are delightful. The ones on the less touristic North Coast are especially pleasant. Additionally, several companies offer kayak and boat tour adventures.

Guernsey (27 square miles) lays to the Northwest of Jersey. Ferries arrive in Saint Peter Port, from Southern England, Normandy and Brittany. Renting a bicycle is an enjoyable option for discovering this small island. Most beaches are very secluded and quiet.

In addition to wandering in the narrow streets of Saint Peter Port, the capital, there are a few notable attractions in town. Most notable is Hauteville House, purchased by French author Victor Hugo in 1856. A political opponent of French emperor Napoleon III, Hugo spend many years in exile on Guernsey, “the rock of hospitality and freedom”. He finished Les Misérables, wrote The Toilers of the Sea, and many other masterpieces here. A complete artist, Hugo carved his furniture and decorated this house himself. This is why his house is an interesting window into his soul, allowing one to discover another facet of the man. Incidentally, his longtime mistress, Juliette Drouet, moved across the street during Hugo’s exile. The house and gardens, donated to the City of Paris by Hugo’s grand-children, are open to the visit during the summer months. 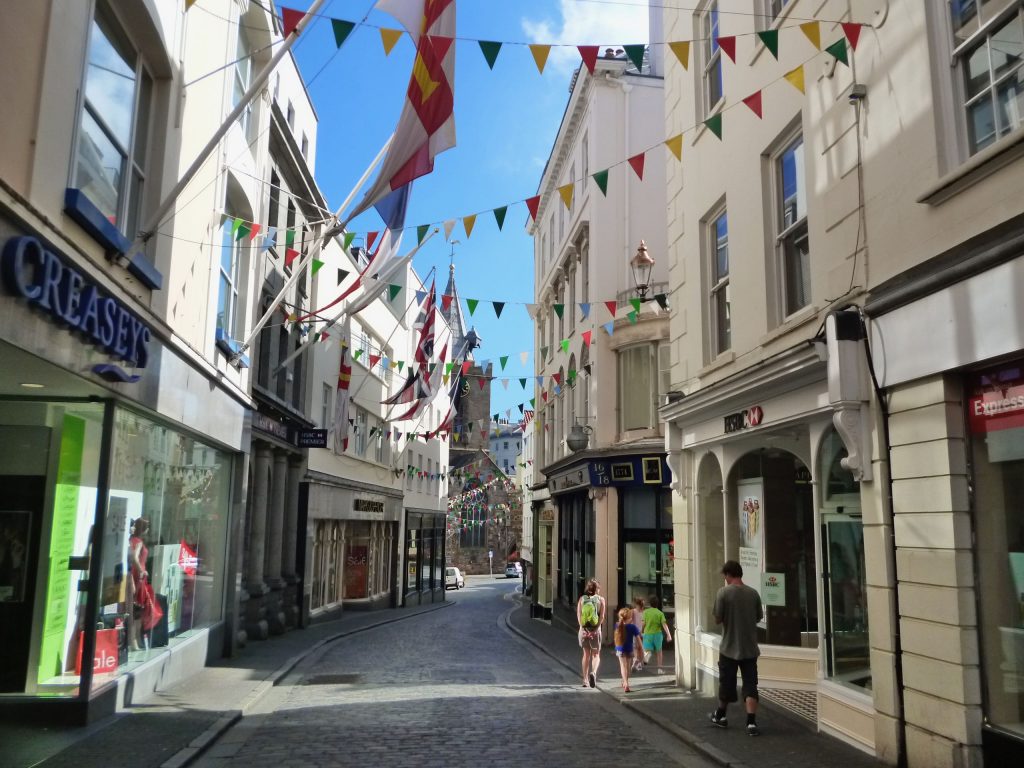 Wild and quiet, Sark has an area of about 2 square miles and is best discovered on foot. There are no cars here, only tractors and horse-drawn carriages. The views all over the island are breathtaking, especially the minuscule “Creux Harbor” and the isthmus of La Coupée. Take a walk on narrow trails, along stone-walls, surrounded by the native vegetation, and very soon, you’ll reach the rocky cliffs of the rugged coastline. True, the island has changed in recent years, especially with the addition of many vineyards. Yet, on a windy and rainy day, it is easy imagine being the heroin of a Brontë novel!

Sark’s specificity is its feudal government, in place since the Middle Ages. The Seigneur has kept antiquated privileges until 2008, most notably appointing the local officials. Be sure to visit the beautiful gardens at La Seigneurie. Because it seldom freezes on the Channel Islands, even some exotic plants grow here. Sturdy garden walls further protect these rare plants from harsh weather and winds.

Alderney (3 square-miles) is located 10 miles off La Hague, across the Alderney Race. The weather here isn’t as mild as on the other Channel Islands, and it is often very windy. The waters all-around can be quite treacherous too. There is only one town on Alderney, St Anne, where all the restaurants and shops are located. Not a lot of trees grow here, but colorful bushes of heather and gorse, lighten the landscapes.

Alderney, while sharing some similarities with Sark, has some unique characteristics. WWII left traces here too: the German Fire-control Tower Marine Peilstand, east of St Anne, is very well preserved and an impressive sight.

Tidal amplitude here is impressive and ensures ever-changing landscapes, best appreciated when walking on the cliffs overlooking the English channel. The islands breathe, following to the Earth’s rhythm: beaches appear and disappear, seabirds shriek overhead. Here, I felt surrounded and dwarfed by the forces of nature.

All over the island, British sculptor Andy Goldworthy left his “Stones”: giant boulders of mud, left to erode naturally.

On all the islands, Honesty Boxes dot the roads, proposing local products.

Neither French nor English, the Channel Islands offer an interesting blend of both. Tourists can step into the past, and discover a unique culture where traditions are as important as modernity. Small yet diverse, the islands propose different types of activities and landscapes, ensuring a relaxing vacation to visitors.