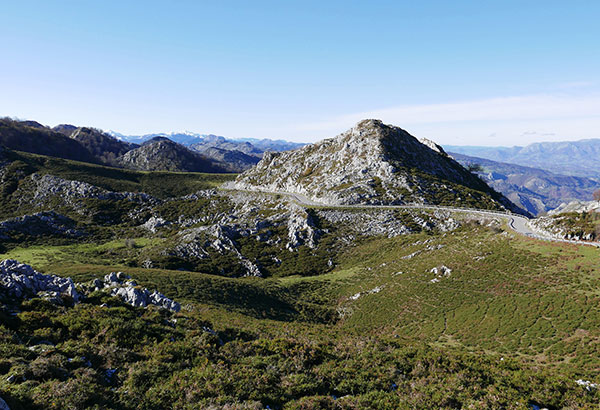 My favorite vacations usually involve rambling down a winding secondary route, anticipating what’s around the next corner. The unknown is something I simply can’t resist so I’m always looking for an opportunity to plan my next excursion, using practically any excuse I can find to go on the hunt for something—anything—just so long as it’s potentially interesting. Last year, I planned a Spain road trip in November after seeing this stunning photo of Covadonga online. I never intended for this tiny mountainous town in the Asturias region of northern Spain to be the final destination but, rather, a waypoint to shoot for on a leisurely tour of modern to medieval through country we hadn’t seen before. As usual, we happened upon fascinating villages and unforgettable sights, all of which were made better by crisp fall air, rich food and abundant wine, and, most importantly, a refreshing lack of visitors. Afterall, it was the off-season.

Rain is likely this time of year. In a country that sees mega sunshine, that translated to about a week of drizzly weather. It came in a few bursts over the month, mostly when we were in the north, as we made our way from Granada in a counter clockwise path that ended in Madrid. The rainy days brought fog that hung in the Pyrenees as we wound our way through the mountains, and the cloudy skies gave soft colors to the buildings and green fields. It provided that inviting atmosphere that makes me want to curl up with a book in a great hotel. Truth be told, I could have used a few more of those days to just be lazy, as they were some of my favorites of the entire trip.

If a picture is worth a thousand words, here are a few visuals to get you started on your Spain road trip.

What you could experience if you plan a Spain road trip:

It’s hard not to find medieval villages or centuries old city centers that make a detour worthwhile. During this time of the year, you’ll be one of only a few tourists in the now sleepy places that are popular in summer. Locals are curious about why you’re there, and impromptu conversations are more common than not.

During our Spain road trip, we explored villages that showcased a variety of architecture from timber and stone houses to a town known for its Mudéjar architecture and another where buildings cling to the side of cliffs. If you love architecture, one of the best parts of a drive like this is discovering how styles of buildings change to reflect regional and cultural influences. The 11th century medieval stone village of Ainsa is tucked into the Spanish Pyrenees. Popular in the warmer months because it’s well located for excursions into the mountains. I like to daydream as I wander around, imagining what it would feel like to have this medieval front door as the entryway to my house. 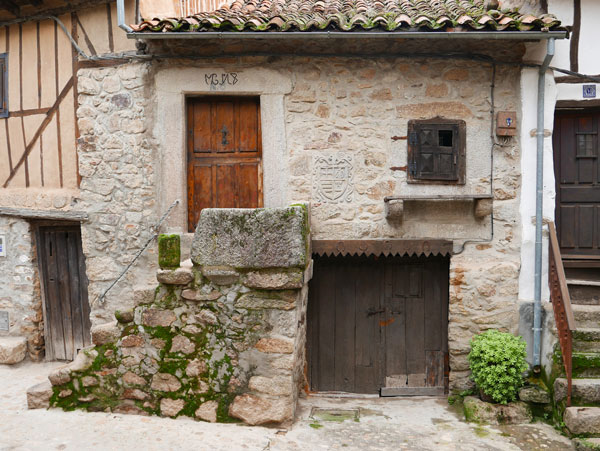 I photographed many stone houses while we crossed the country, and they come in all shapes and sizes. Small villages like San Martin del Castañar, La Alberca, and Miranda del Castañar—all in the mountainous Sierra de Francia located in the Castilla y León region of western Spain—are worth your time. 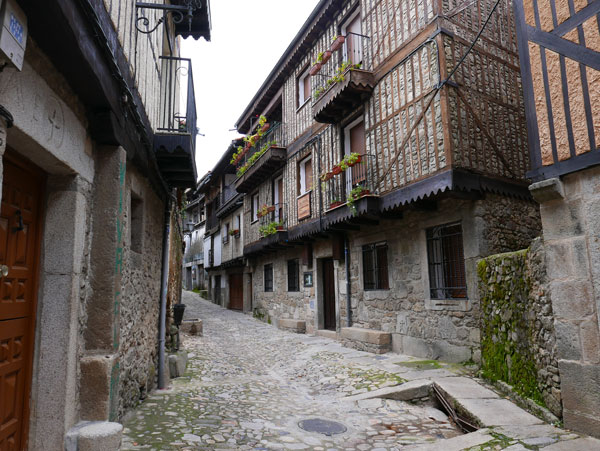 In La Alberca, 1700s-era timber-frame with stone houses line the tiny streets. This technique has been used for centuries in many countries around the world and was popular before modern mechanized saws. Many homes have the date they were built carved into the stone above the doorway.

Much of Spain continues to be rural or wild. If you appreciate the beauty of this type of landscape, this could be a drive for you. The country has many natural, as well as national parks, and in the warmer months, the gateway towns host trekkers, bikers, and climbers who are looking for mountain trails and fresh air. 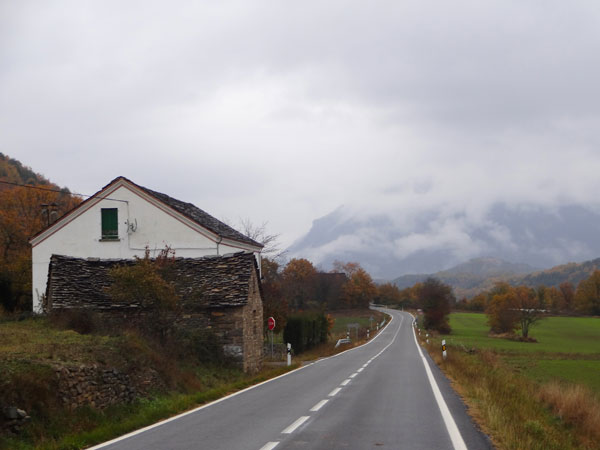 The Pyrenees were shrouded in fog the entire time we were there. Dotted with rustic houses, green pastures, and grazing livestock, this road turned out to be one of the most beautiful routes for enjoying quiet rural scenes. You’ll find many cultural sites along a Spain road trip, and our month in the country didn’t begin to give us enough time to explore all of the destinations we wanted to see. We chose a few, some of which were UNESCO World Heritage Sites, and we’ll go back another time to tick off a few more. 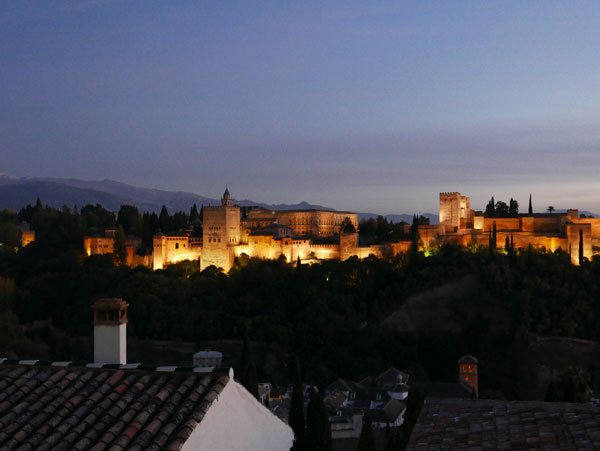 In Granada, one of the most appealing cities in the country, you’ll find the Alhambra. A fortress first built in AD 889 and then rebuilt from ruins in the 13th century and converted to a palace, today the Alhambra stands guard on a hill overlooking the city and lights up the night skyline. The structure is known for its Islamic architecture that includes intricate carvings and exquisite tile work. Arched walkways, peaceful gardens, and lofty spaces make this one of Spain’s most popular destinations. The Alhambra overlooks the Albayzín, a historic district that features Moorish and Andalusian architecture and also shares World Heritage status. Spend an afternoon getting lost in its cobbled, twisting streets. Bougainvillea spills over white walls that surround private residences, and you can glimpse views of the Alhambra framed by narrow streets as you pass by. If you go, find a table at a restaurant overlooking the Alhambra in the late afternoon and enjoy an unforgettable sunset. 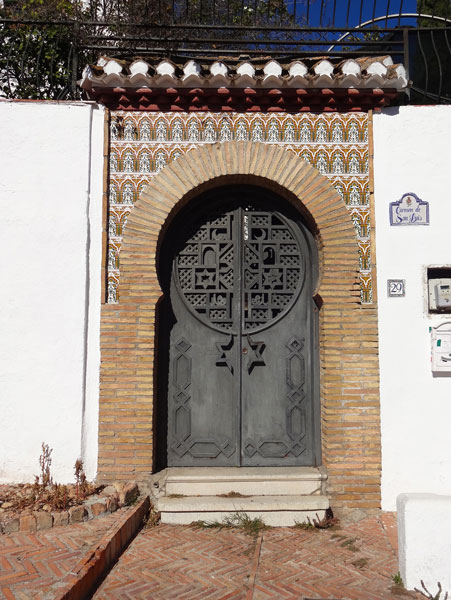 It’s details like this that make the Albayzín so fun to explore. There are many historic homes in this area known as carmens and they have expansive gardens with fruit trees, fragrant flowers, and vines. Often they are restored but the grounds are behind high walls, prompting an immediate urge to peek through the gated doors (I never do but I really want to). I rented a guesthouse on one of these properties years ago and had a chance to tour the main house. You’ll find carmens used for restaurants, hotels, and more. 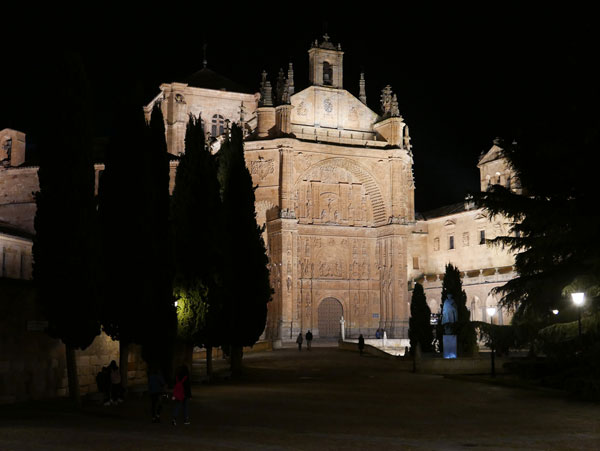 The old town of Salamanca, another UNESCO site, offered a completely different feel than anything we’d seen to date. An intricately carved sandstone façade encases a massive cathedral that dominates the town and is beautiful day or night. 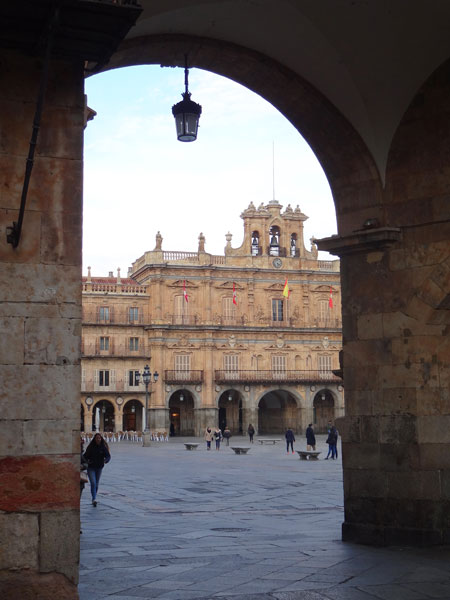 Salamanca’s grand Plaza Mayor is thought by many to be the most beautiful in the country. These central squares serve as a gathering space to eat, drink, and see and be seen. There’s no better people watching on a sunny day. 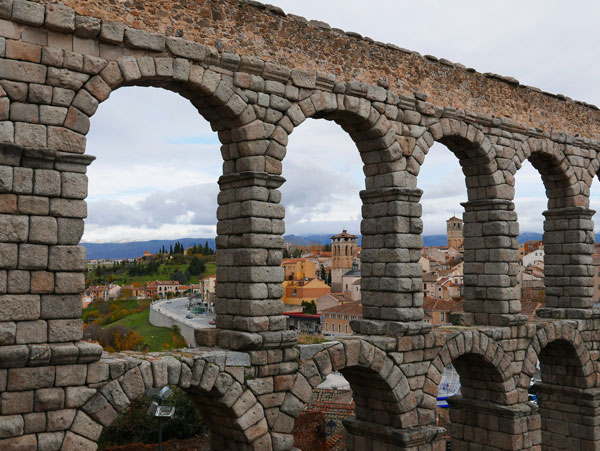 Segovia, a popular city west of Madrid, should be on your radar if you’re a fan of Roman architecture. The old town—a World Heritage Site—buzzes with visitors and locals, even in the off-season, due to a massive two-tiered aqueduct that was built in the first century AD and is the symbol of the city. Stroll the narrow shopping street in the evening, it leads to the beautiful well-lit structure. 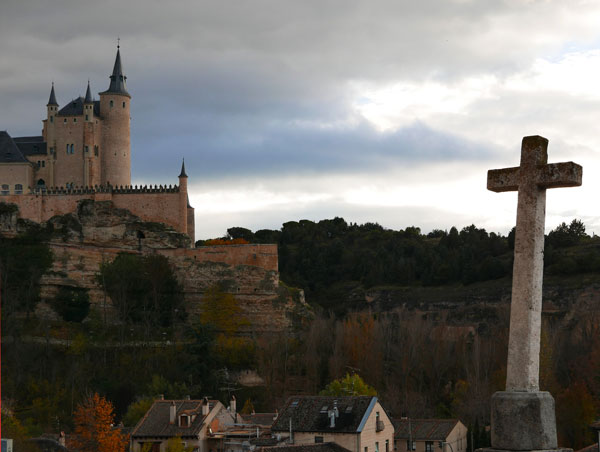 The Alcázar, perched on a rocky cliff, started as a fortress but has also been a palace, a prison, and more. Today it houses a museum and offers sweeping views of the area if you climb to the top. The structure was rebuilt in the 1800s after a fire. Supposedly this was Walt Disney’s inspiration for Sleeping Beauty’s castle.

Spain continues to impress me with its beauty, friendly people, and delicious regional cuisine. If you haven’t spent time there, and plan a Spain road trip, you won’t be disappointed. There are lots of home rentals in Spain, check out these tips for renting successfully if you’d like to try living like a local. If you’d like to know more about Spain’s famed cider tradition before you head north, you can read about it here.