You have heard the phrase, “the magic is in the music.” Well, it’s true in more ways than you might think! Both playing an instrument and listening to music do wonderful things for our brain, and especially for cognitive function. It fires up all the circuits. It also soothes our sympathetic nervous system that is our “fight-or-flight response,” by slowing down the release of adrenaline and cortisol. Cortisol being the longer-lingering chemical that damages our bodies and brains when it stays elevated. Our whole being downshifts into a more relaxed state, which heightens our emotional state. Heightening our emotional meter allows our brains to process more information, make needed changes to existing knowledge, and lay new neural tracks.

Research in Scandinavia found that listening to music lights up not just the quadrant of our brain tied to motor skills, it also enhances our creative center. Even better news is listening to music also activates the parts of our brain connected to abstract decision making, social behavior, and most importantly to so many of us, our memory. It also improves our verbal fluency. A strong tie may exist between music and our ability to pull up, arrange, and compose well-formed sentences. This connection keeps our database of words at the ready. Listening to music stimulates our brain to adapt, change, and even grow– actions that help stave off cognitive decline. All this adds up to great news: listening to music could help keep our brains young!

Many women, and men, ask me if there is a magic number of hours we need to listen to music to receive these cognitive-preserving benefits. Our most recent research points to a one-three hour window of time. A symphony, a music concert, or a full-length opera, covers it. Or, a suburban to urban commute on a bus or train, a plane flight from Dallas to Washington, DC. What the research all agrees on: solely listening to or watching the ballet/opera/symphony or concentrating on the scenery, is the key. Ignore the phone messages, put down the crossword puzzle, and be fully present in the moment to hear, feel, and experience the music without distraction.

What is the best genre for reaping this neurological payday? The smart money is on classical music, followed by instrumental, jazz, or any music that doesn’t have a rock and roll beat. Please don’t shoot the messenger here, but science doesn’t find rock and roll to be that beneficial for brain health (dang it). It seems the timbre, tonal, and rhythmic composition of rock and roll doesn’t offer the same benefits. So, until new research comes out in a respected peer-reviewed journal, the way to go is less rock and roll and more Rachmaninoff on our playlists.

Distilling more than twenty years of research done at the Beth Israel Deaconess Medical Center at Harvard Medical School, researchers found cognitive decline connected to aging can be “slowed, arrested, or even reversed through appropriate designed training activates.” The avenue to make this happen? Learning to play a musical instrument. In one of the studies, healthy, non-dementia affected seniors selected an instrument to learn to play. They played frequently, and at the end of five years were far sharper than their contemporaries who didn’t learn to play the harmonica.

Playing an instrument is what Dr. Alison Balbag at the University of Southern California calls, “a full-brain workout,” actually second to none in helping our brains. All the quadrants of the brain are engaged when we play, including the tissue connecting our two hemispheres. In long-time musicians, this connective tissue is thicker and stronger than in non-musicians. Interesting fact: musicians as a group only experience dementia and Alzheimer’s 35% of the time, compared to those who have never played an instrument. BrainAGE scores—a test measuring one’s cognitive levels—were much higher, and so, with less cognitive impairment or decline, the scores reflected cognitive levels equal to noticeably younger folks than themselves.

Even more good news: several studies involving senior women who had never played an instrument before, found that after they began piano lessons and completed a short term intensive course of four to six months, the women’s test scores on their verbal fluency—the amount of time it took to pull up a particular word, their speed at processing information, and their working memory, all soared. What surprised the researchers about these women offers us all great hope: even three months after the course finished, the benefits stayed with them. Had the women continued playing, they might have turned back the clock on the age of their brains. So cool.

Two other groups of musicians also show greater cognitive function in their later years. First, as Dr. Balbag found, lifelong musicians seem to have low incidents of dementia, and the second group is folks who played an instrument as a child. If a girl practiced her violin from ages four to fourteen, she banked cognitive changes which will help her for the rest of her life, even if she stopped practicing when she discovered boys. 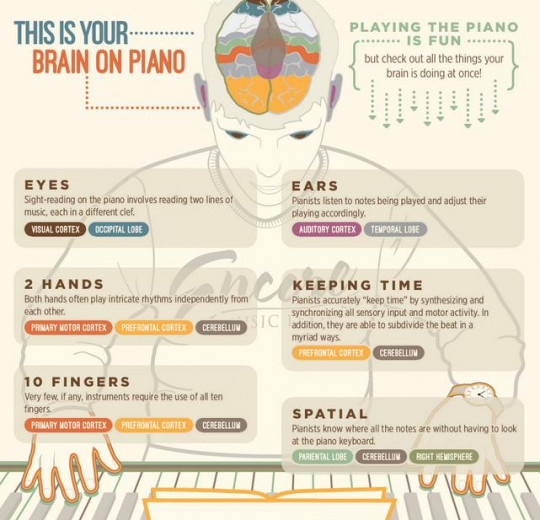 All this points to how truly magical music can be. It’s one of the most powerful creations on our planet, an expression of the soul of every creature who makes music—from the mockingbird outside our window to the dolphins in the ocean to the professional cellist playing on PBS. It soothes us, energizes us, and now we know it also protects us from experiencing declining faculties. If you have ever thought about learning to play an instrument or starting to play again, now is the time to pick one up or dust off your music books and return to playing. Even adjusting your listening habits a bit has great benefits. No matter which of these options you choose, you will feel and experience the healing gifts music offers to us all.

The Most Common Questions To Ask a Gerontologist

Therapy Over 50: Where to Start

Medication Side Effects You Should Never Ignore

Go With Your Gut: Why You Should Listen to Your Intuition

Neti Pots: What Are They and How Do I Use Them Correctly?

Sex After a Hysterectomy - Do You Know These Changes?

Knee Replacement Wearing Out? Here Are Your Options

Human Hibernation: Is it a Real Thing?

Therapy Over 50: Where to Start

Medication Side Effects You Should Never Ignore

Go With Your Gut: Why You Should Listen to Your Intuition