Too Late to the Les Mis Party?

Ok, ok, I know I’m very late to the party with this one but all the best things are worth waiting for, right? Jobs, friends, relationships, marriage…. surely the longer you wait, the sweeter the outcome. Well, I certainly believe in that anyway…probably answers why I’m single and never married, although not through lack of trying, I hasten to add. Anyway, I digress….

When I first started writing my ’50 things’ list, seeing Les Mis in London was right up at the top. Having seen the film a few years ago and loving it, then becoming totally obsessed with the soundtrack, I knew it was just a matter of time until I saw it on stage and imagining I was the slightly love-struck Eponine, belting out ‘On my Own’ without a care in the world. There’s been many a long car journey where I have found the Les Mis soundtrack on my playlist, ramped up the volume and wailed my way through 2 1/2 hours up the M40, lost in the French Revolution and all its sadness. 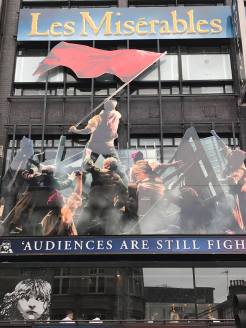 So, as I made my annual trip to Wimbledon last week, I decided to finally make an effort and go and see the show. Rather than spend another night in a hotel room, I hopped on the train and popped back above ground in the very busy Piccadilly Circus. Ahh…the lights, the noise, the crowds, the smells of our fine capital. Wandering along like the stereotypical country bumpkin, I took in the sights, the street names and the vibe of London on a Friday evening in summer. And then as I meandered through China Town, I saw it; The Queens Theatre. I took a sharp intake of breath as I got closer, not quite believing I was finally here; finally seeing this masterpiece on stage.

After a quick gin in the bar (pleasantly surprised it wasn’t ridiculously expensive!), I made my way to my seat and instantly realised my first schoolgirl error. As I’d only booked my ticket two days before, the only available ones were ‘Up in the Gods’ – also known as the cheap seats. And as I booked an end of row, my view was unfortunately not the best – well, if I wanted to see anything happening stage left, that is. Still, I would not be put off. I was too excited to care if I missed a tiny bit. 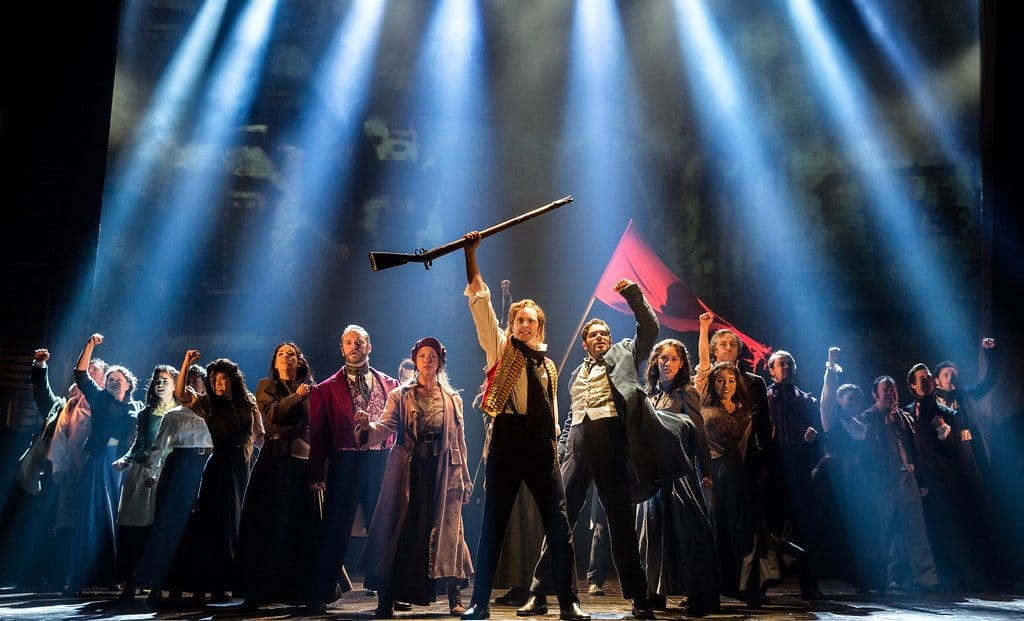 From the moment it started, the moment the first note was sung, the moment Jean Valjean waked on stage, I was mesmerised. I hung on to every word, watched enthralled as each character came onstage, bringing the story to life. I found my heart beating a little faster as ‘One Day More’ rang across the theatre and had to stop myself jumping up and joining in. To say I was moved would be an understatement.

The second half of the show was as wonderful as the first; although so much sadder. From my restricted view, I couldn’t see poor Eponine meet her maker, but I closed my eyes and remembered the film scene. As the story moved through all of its separate parts – the love story of Marius and Cosette; the fatherly protection from Valjean; the cat and mouse game with Javert and of course the French Revolution – I just knew I didn’t want it to end.

And even though I knew the ending, I knew what to expect, it still slapped me across the face and caught me off guard. Now, this isn’t a spoiler if you’ve not seen Les Mis, but as you can probably guess, not many people make it out alive. But that’s not the sad part, well not the really sad part anyway. Seeing Valjean as an old dying man was the tipping point for me; the point where the tears I’d been holding back came flooding out – along with the snot, the snot bubbles and the rivers of mascara. Oh, my goodness, I sobbed. Proper heaving sobs as well. It wasn’t a pleasant sight and I can only be grateful I was (A) on my own and (B) not the only one crying in the audience!

It is of no surprise whatsoever that this show has been running for over 30 years. It is outstanding. Fact. If you have never seen it, just go – you won’t regret it. Les Mis is touring next year and when it comes to Birmingham, I can assure each and every one of you I will be there at least once.

Next time though, I am booking better seats, not wearing any mascara and taking a lot more tissues!

Perfect Gifts for a Brandless Life

Freshen Your Home for the Spring