Estrogen, Menopause, And The Risk Of Alzheimer's | Prime Women

Estrogen, Menopause, And The Risk Of Alzheimer’s

In March 2018, genneve CEO Jill Angelo and I were fortunate enough to do a podcast with neuroscientist Dr. Lisa Mosconi about the risk of Alzheimer’s. The following information is derived from that conversation and from Dr. Mosconi’s book, Brain Food: The Surprising Science of Eating for Cognitive Power.

“Getting older is not a linear path to dementia, and genes are not your destiny.” With those very promising words in mind, here’s the less-great news: of every three cases of Alzheimer’s disease, two are women.

Dr. Lisa Mosconi is a neuroscientist, nutritionist, and Associate Director of the Weill Cornell Alzheimer’s Prevention Clinic. She and her team are hard at work trying to understand why simply being a woman puts you at a higher risk of Alzheimer’s.

So why does it put you at a higher risk of Alzheimer’s? The answer seems to be menopause, or at least the decline of estrogen that signals the end of a woman’s reproductive years. According to Dr. Mosconi, “menopause causes metabolic changes in the brain that seem to increase the risk of Alzheimer’s disease.”

What’s the link between menopause and an increased risk of Alzheimer’s disease?

The reason? Estrogen. Or the absence of it.

Estrogen, Dr. Mosconi says, has neuroprotective qualities; it also acts as a neurological stimulant. “It literally stimulates certain parts of your brain to be active and to be metabolically engaged.”

When estrogen declines, the brain loses that protection and that stimulation. In brain-imaging research, perimenopausal and postmenopausal women had less mitochondrial activity and more evidence of plaque than younger women or men of the same age. Because mitochondria are responsible for the production of energy, if the mitochondria slow down, our ability to produce energy also slows down. Voila: brain fog. And the greater risk of Alzheimer’s.

Men don’t share the same risk because testosterone provides neuroprotection, and in men, testosterone declines later in life and more slowly. Plus, their bodies and brains aren’t as estrogen-dependent as women’s.

What can we do to protect our brains?

So, if estrogen protects and energizes the brain, should we be taking HRT to counteract the loss?

According to Dr. Mosconi, more research is necessary to determine how much HRT can help, when it would be most effective, and what the formulation should be, and to weigh out the risks and the benefits.

HRT may not be able to save us, but here’s the really good news: “One percent of the population develops Alzheimer’s because of genetic mutations,” says the good doctor. “Your lifestyle and your environment play a huge role. What we have learned is that 1 in every 3 Alzheimer’s cases could be prevented by addressing lifestyle and medical factors like factors for cardiovascular risk, but also lifestyle, in terms of exercise, intellectual stimulation, and perhaps most of all, diet.”

Yep, one virtually risk-free way to reduce your risk of developing Alzheimer’s is through brain-friendly nutrition. Dr. Mosconi calls it “eating for retirement.”

To get the full story, be sure to check out Dr. Mosconi’s book, Brain Food: The Surprising Science of Eating for Cognitive Power.

5 Things to Do to Lower Your Risk Of Alzheimer’s 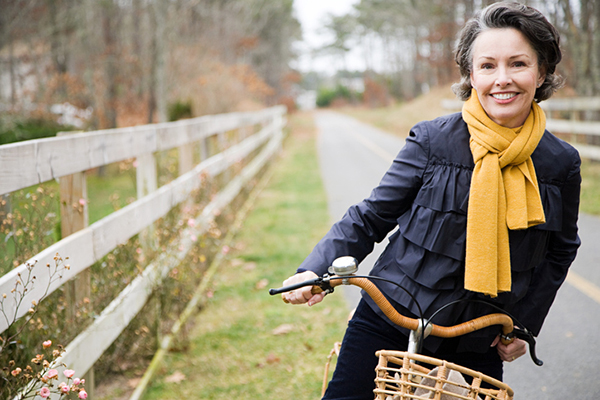 The brain is 80 percent water and requires water for all of its functions. A loss of water of just 2 percent, which isn’t even clinical dehydration, can cause neurological symptoms such as brain fog, confusion, and dizziness. And don’t drink just any water, drink water that has the full complement of natural minerals and electrolytes. Club soda, seltzer, and purified water don’t have the nutrients our brains require.

Hormones go “cross-species,” Dr. Mosconi says, and the estrogen in foods can perform similar functions in the body as naturally produced estrogen. So load up on the soy, yams, chickpeas, flax seeds, apricots, and strawberries.

Fried foods, trans-saturated fats, animal products are all inflammatory, even affecting the brain. Limit the highly processed foods in favor of staying closer to the source.

There are population pockets called “Blue Zones,” Dr. Mosconi says, which are longevity hotspots. All over the world are these small concentrations of people who live long, robustly healthy lives, and the one thing they have in common? Diet. Lots of plants, plenty of good carbs, lots of fish. Not much alcohol, few animal products, little dairy – local, fresh, and seasonal.

Try to keep them at a 2 to 1 ratio, twice the amount of Omega 6s to 3s. Unfortunately, most of us get far too much Omega 6. A good way to increase 3s is by eating caviar, certain types of fish, especially salmon, herring, mackerel, and sardines; plus flaxseed oil, hemp or chia seeds, black walnuts, and oats.

In addition to diet, exercise consistently and stay intellectually stimulated. People who do these and take care of their hearts can have up to 150 percent improvement in cognitive function. So, walk briskly and play board games with friends. And there are the usual things as well – sleep well and reduce stress – to minimize inflammation in the body.

Even if Alzheimer’s runs in your family, you are far from helpless. As Dr. Mosconi says, get some tests to establish a baseline. Look at every aspect of your health: diet, sleep, activity, and stress so you can check in periodically as you go through different life stages. Improve where you can and educate others – who knows? Your neighborhood might become the next “Blue Zone”!

The Best Exercises to Help Prevent Alzheimer’s and Dementia