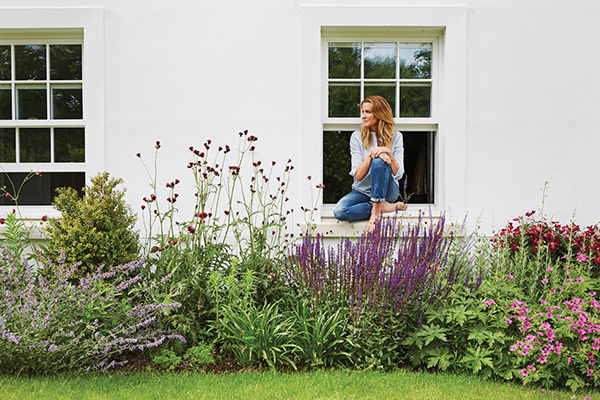 India Hicks Offers a Grand Slice of Her England 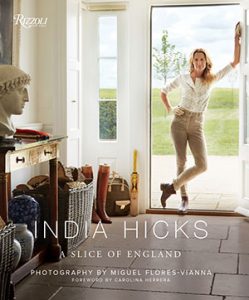 THE UNEXAMINED life is not worth living. I believe we learned that from Socrates. Or was it Mr. Rogers? By way of an admittedly tortured analogy, there doesn’t seem to be an unexamined corner of any house in which the English lifestyle entrepreneur India Hicks has lived. In 2015 we had pictures of her plantation-style house in the Bahamas spread over 224 pages of glorious color photos (India Hicks: Island Style), which had followed 192 pages of the 20o4 Island Life: Inspirational Interiors. Now it’s India Hicks: A Slice of England, published last month by Rizzoli International Publications: not one, not two, but three family houses where Hicks spent her formative years, plus the one she and her partner of many years, David Flint Wood, have recently constructed.

The piled-on decorating in these digs has the careless, insouciant sense of “Oh, this thing just landed on the table 137 years ago and, look at that!, it’s still there.” That kind of disarray requires a great eye and a lot of editing. Trust me on that.

Hicks comes by it naturally: Her father was the flamboyant (her word, not mine) interior decorator David Hicks, who not incidentally claims to have coined the term “tablescape,” the artful arrangement of objects on, well, a table or other horizontal surface. Her mother’s side of the family—the Mountbattens, don’t you know—seems to have supplied most of the plaster busts, oil portraits and horsefly whisks left over, perhaps, from when Grandpa was Viceroy of India (hence the author’s first name).

The assemblage, and the juxtaposition of ancient manses and David Hicks’s vibrant color schemes, are quite impressive. One could stare at these interiors many times and discover something new each time.

Could I wander around my house and take soulful pictures of corners occupied by the decorative detritus of a life enamored of objects? I have the Regency writing table. The requisite mahogany chest of drawers with Prince of Wales escutcheons. The odd bits of old Chinese crockery. Even a gilt palm-tree lamp. I daresay these decorative exploits could engender great images—but only if the gifted Argentinean photographer Miguel Flores-Vianna, the eye behind the Hicks images, were behind the camera, I’m afraid.

But who would want to look at my things? Sometimes even I don’t. Also, I’m not Prince Charles’s second cousin.

Do I sound bitter, envious? You betcha. India Hicks even had the nerve to be a bridesmaid at the wedding of Prince Charles and Princess Diana. And she was a fashion model (still is, really). There’s quite a bit of humble-bragging about the tedium of being surrounded by such fancy and famous types, but Hicks delights in self-deprecation, which takes the edge off.

But Hicks doesn’t. She takes us through the truly stunning interiors of the Broadlands estate, home to her grandparents, then Britwell House (until it had to be sold) and The Grove, both lived in by her parents, David Hicks and Lady Pamela Hicks. The fourth is America Farm, built when Hicks and David Flint Wood feared that their five Bahamian-raised children might be losing their Englishness.

But let me get out of the way (finally, you say?) and share an excerpt from Hicks’s beautiful home. Here she turns the reins over to David to tell of the “journey of America Farm.”   —Nancy McKeon

SO WHAT IS your idea of a house in the country?” Andrew Nichols, our architect, asked. Here we got lucky: India and I both wanted something traditional, probably white stucco, a cross between a Danish farmhouse and a Georgian rectory. As a shorthand description I said, “We’d like to live in a Merchant Ivory film like everybody else, I suppose.”

We are also complete slaves to symmetry in architecture. Aligning doors and windows is important as they create vistas that expand space. And living in the tropics had taught us that the breezes that pass through opposing windows and French doors would come in handy during England’s two weeks of summer.

For the more predictable weather conditions, I was keen to have as many fireplaces as possible through the house. Whilst India loves nothing more than walking in biblical conditions of rain, sleet, and snow, I prefer to gaze upon inclement weather, sitting in the vicinity of crackling logs with a good book and a drink, so we had a Portland stone mantel made for the sitting room and a marble one for the study. I was very keen for another real fire in our bedroom, but India felt that cleaning out an upstairs hearth would be a bore. Gingerly, I pointed out that it would be unusual for her to clean any hearth—we compromised with an artificial fire.

Though India grew up with vibrating palettes in every room, we tended to go with fairly neutral backgrounds and one keynote color, such as the orange Ultrasuede on my Louis VXI–style chairs. One of our sons’ rooms has gunmetal-and-red-striped walls painted on the diagonal; our daughter’s has a lit à la polonaise, covered in David Hicks’s original Tumbling Rose print that was inherited from the Hicks family’s famous Albany set.* Art often supplies the chance to add color, with Gerald Laing’s Baby Baby Wild Things and Alexander Calder lithographs being good cases in point. My antique gouaches of Vesuvius erupting and the eighteenth-century still-lifes, though, tend to find themselves “compromised” and lean against walls.

In the mixing of furniture that either I had collected or that India’s parents had at Albany, we could not have been luckier—it all went together. The first night the seven of us stayed in the house, it felt like home.

*A “set” of apartments, in this case in Albany, London’s oldest private residence. 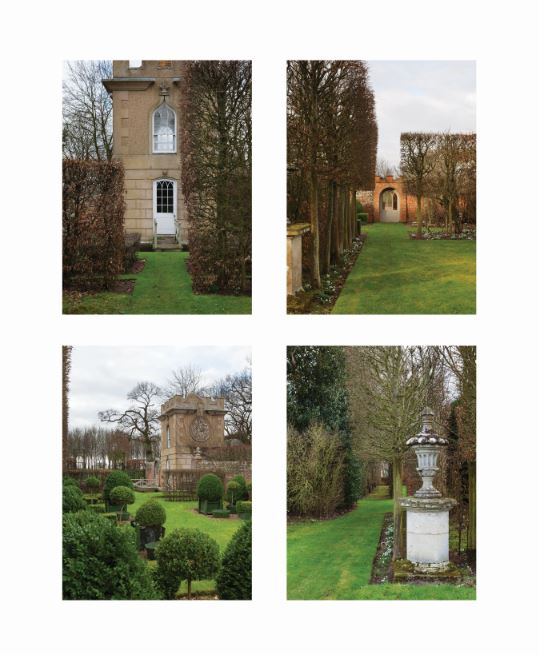 These photos show “moments” around the garden at The Grove, where India Hicks moved when she was 12. The large structure is “my father’s Pavilion, a birthday present to himself.” His open coffin was laid out there before his funeral. / From “India Hicks: A Slice of England.” Photo © Miguel Flores-Vianna. 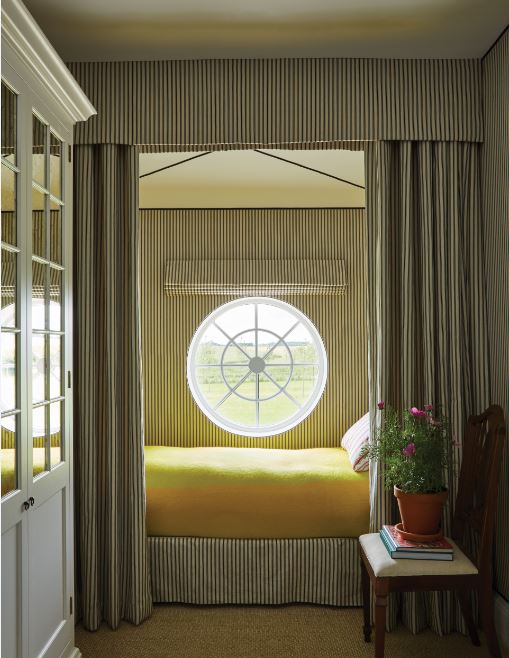 This room was originally intended to be for linen storage, but with the round window and the view over the fields, it was quickly rededicated as a guest room, its design “plagiarized” from the work of designer Veere Grenney. / From “India Hicks: A Slice of England.” Photo © Miguel Flores-Vianna. 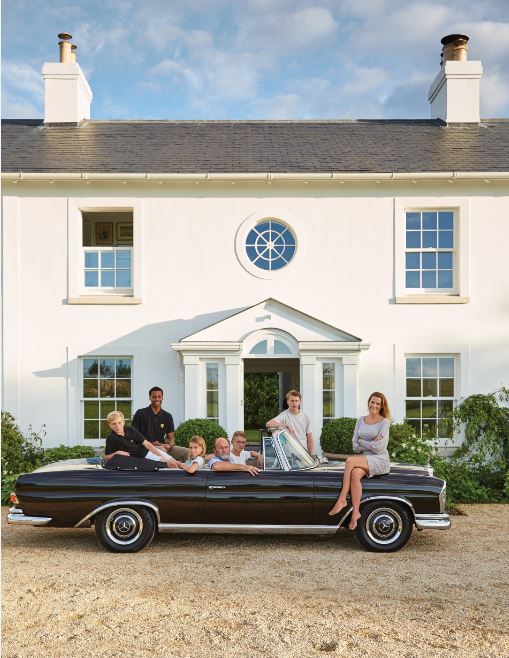 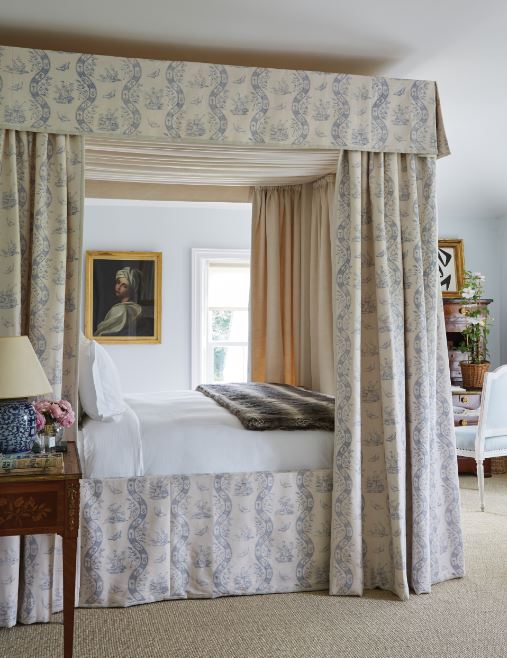 Hicks explains the master bedroom thus: “The four-poster bed is dressed with a Chinese toile fabric from Bennison, the portrait is of Beatrice Cenci after one by Guido Reni, and the roses are from the garden.” / From “India Hicks: A Slice of England.” Photo © Miguel Flores-Vianna. 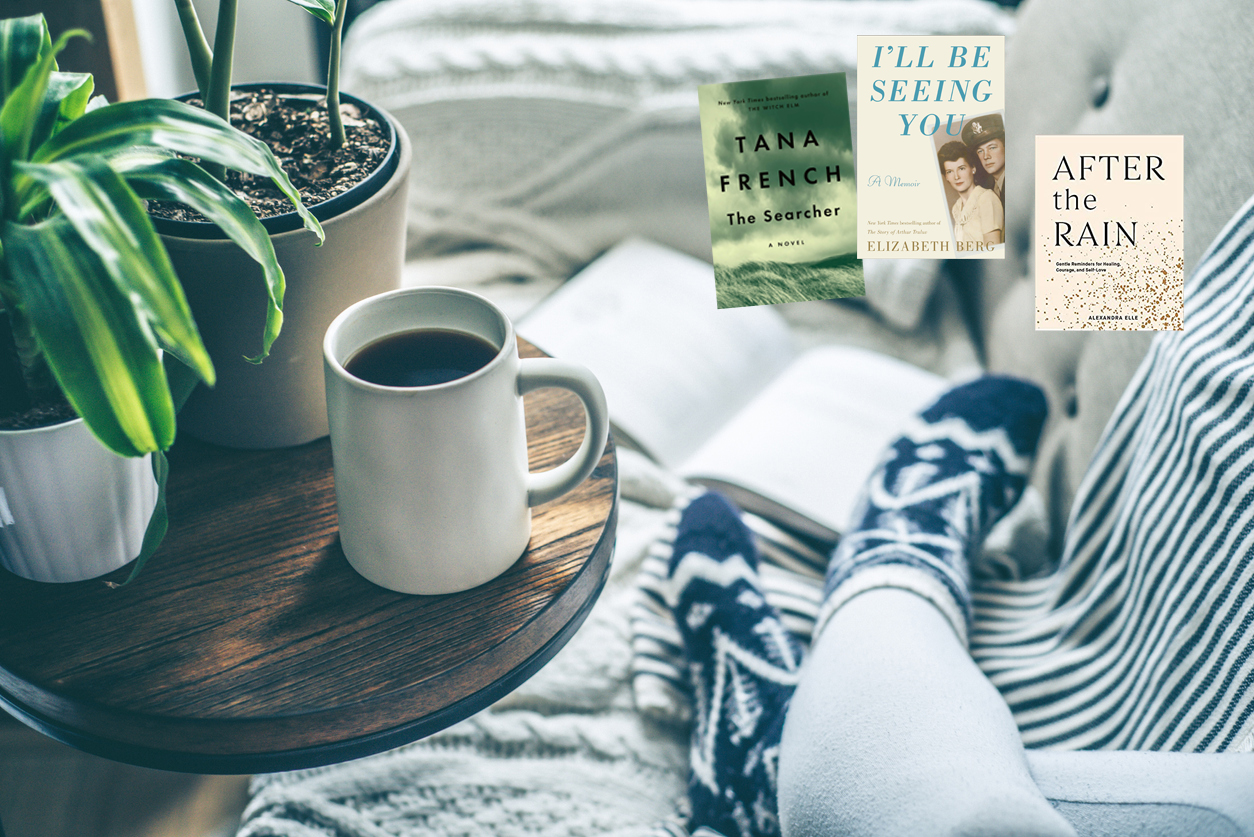