There comes a time in one’s life after children are raised and careers are grounded in success that one wants to give back. While there are numerous organizations that welcome volunteer help, there are also those smaller, somewhat unheralded situations that often provide a special, heartfelt gift of enduring friendship that was least expected. Such is the case for Kelly Hewitt, co-owner of a business-to-business marketing firm.

Answering the Call to Volunteer

Eight years ago, Kelly responded to a colleague’s simple request for someone to read books to a few aging residents of the Crestview Court Assisted Living Center in Cedar Hill, Texas. Since Kelly, an avid reader, lived nearby, she eagerly answered the call to volunteer and began going to the center every Monday at 1:30 p.m. to read to a group of about eight women, all in their 80s or 90s. But one-by-one all the ladies died except for one – Margaret. Even the center’s staff changed so many times that while the current staff knows the lady that comes every Monday, they haven’t bothered to know her name, so they simply refer to her as “the reader.” And that’s fine with Kelly.

But Margaret knows Kelly’s name, and after hundreds of Mondays hearing the writings from one dozen books, Kelly and Margaret have become more than just a volunteer reader and an aging woman. They’ve become friends. “I’ve now met most of her family,” Kelly says. “It’s like I’m a fly on the wall, hearing about her family’s history, current events, tragedies and victories. I’ve learned that Margaret’s mother was a twin and that in her younger years Margaret was a seamstress who worked for a tailor, creating dresses, suits and a whole array of tailor-made clothing.

“Every time I go, we spend at least ten minutes talking about how the week has gone for both of us. Margaret has heard about my parents dying, my sister dying, and the birth of my triplet grandchildren. I likewise have heard about her family, including the sadness she has for one daughter in her 70s who has dementia. Imagine out-remembering your own daughter’s memory. I’ve visited her whenever she’s gone into the hospital and I’ve celebrated each birthday she’s had, never knowing whether it will be the last one. I could call her at any time; she has such wisdom.”

The Reward of a Friendship 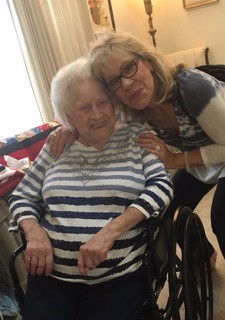 People often ask Kelly why she continues to go every Monday, just to read to this one lady. Why only read to one person, they ask. Kelly’s answer is always the same.  “Margaret has now become a friend to me, and I to her. In fact, the other day we were talking and reflecting on, of all things, funerals. I was laughing and telling her I hoped I could get the front row filled with family and friends when I die. She responded, ‘I have no friends left to come to mine; they’re all dead.’ Her response saddened me, although I know that I’ll be there, probably reading something to commemorate her life and our special connection.”

Reflecting on their time together, Kelly says she’s motivated to share one major thing that Margaret has taught her.  “Everyone, as you know, teaches you something about life. In Margaret’s case, I’d have to say she has taught me about commitment and the importance of not giving up. If the truth were told, there have been many a Monday that I was just not in the mood to get in the car, go visit Margaret, be upbeat and keep her happiness front and center in my mind. But I’d go anyway. And always I’d be so glad I did.”

Kelly says by continuing her commitment to Mondays with Margaret she finds her sense of self has been deepened and her pride of obligation bolstered. “There’s no doubt our time together through these past several years will always be lovingly cherished as one of my most sweet and tender encounters,” says Kelly. “We have been two souls from two different lifetimes, connected by one passionate thread of interest – our love of reading.”

Through the years, Kelly has read one dozen books to Margaret, ranging from Kitty Kelly’s The Royals to historic books like The Mutant Message—Down Under, about Australia and the Aborigines. But the book Kelly just finished reading to her was significantly meaningful and one they each could relate to very much – Mitch Albom’s runaway bestseller, Tuesdays With Morrie.  “The first time I read this book I was on an airplane when I finished it and I sat there and just sobbed,” Kelly confessed. “Now, one of the most tender moments of my entire relationship with Margaret happened when I finished reading this book to her.”

Kelly recalled that once again, as she came to the end of the book, she began to cry. For three to five minutes she was so emotionally touched she just couldn’t pull herself together. Slowly, Margaret leaned from her wheelchair and gently patted Kelly’s knee.  “It’s hard to say goodbye,” she whispered.

“That was such a tender moment,” Kelly said.  “It was such a difficult time for me because I know that one day I am going to have to say good-bye.”

For now, however, rather than good-byes, it’s time to select a new book to read and to get ready to attend one big birthday celebration. because on October 19, 2018, Margaret Porterfield turns 100 years old. Each year the family has a birthday party for Margaret and each year Kelly makes sure to attend. No doubt Kelly will, like she has these past few years, be there to help celebrate Margaret’s long life. At the same time, she’ll be thinking about the courage and hope Margaret has to have in her heart to continue to greet each day anew.

“Her will to live is extraordinary,” asserts Kelly. “Whenever I leave her I always say, ‘See you next week,’ and she responds, ‘I hope so.’

So simple, yet so profound, which simply makes the point: When one reaches out to volunteer, that volunteer effort has the opportunity to make a powerful difference and to enrich lives – theirs and yours. So whose lives will you enrich this year?

What To Say When Someone Is Dying

How to Get Along with Your Adult Daughter

What To Know About Caring for An Aging Loved One

How to Plan the Perfect Girlfriends’ Getaway