Treasures of the Tetons - Prime Women | An Online Magazine 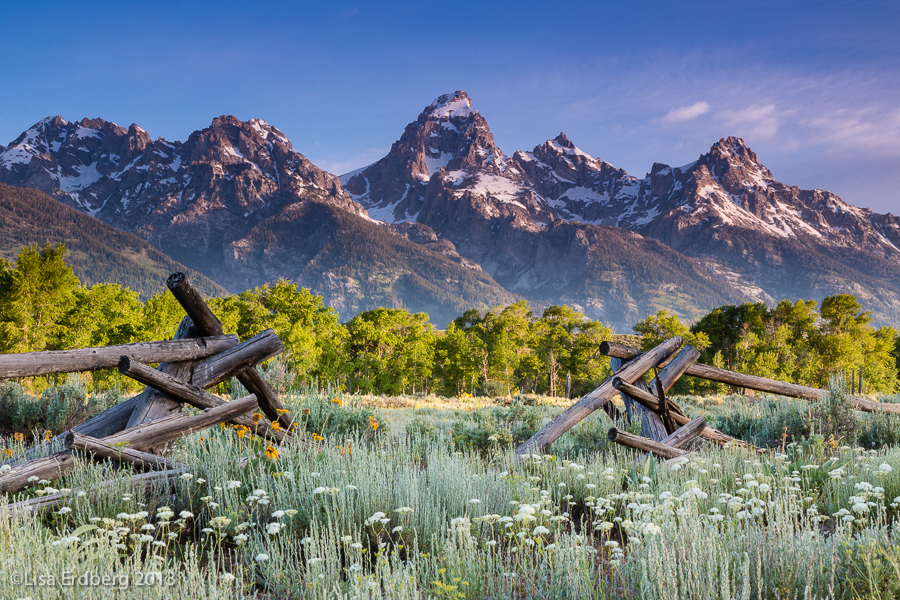 Grand Teton National Park is justly famous for its towering peaks, alpine lakes, hiking trails, and abundant wildlife. I first visited the park in 1990, fell in love with it for all those reasons, and have returned every year since then. Over the years I’ve discovered another facet of Grand Teton National Park that makes it special—the historic ranches and homesteads that tell the story of Grand Teton’s past. These properties provide windows into life in Jackson Hole in the early decades of the 20th century and inspire an appreciation of the strength and courage it took to settle this land. 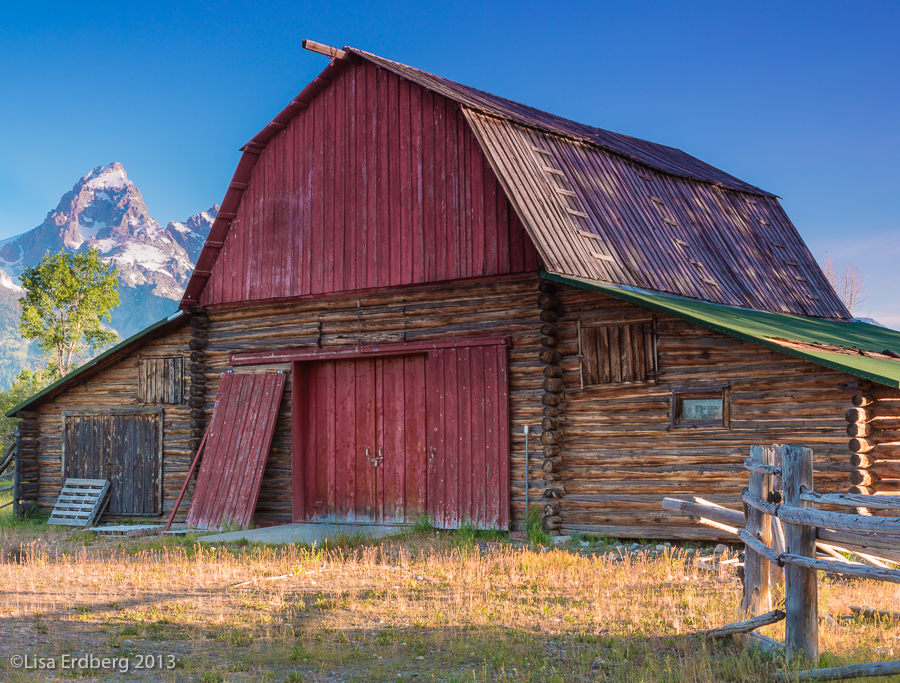 I knew I was on to something extraordinary when I first discovered the 4 Lazy F Ranch! The entrance gate frames a spectacular view of the Tetons, and the barn is every bit as photogenic as the Moulton Barn, just not nearly so famous.

Located near park headquarters in Moose, the property was originally called Sun Star Ranch, and it was an “invitation only” dude ranch until 1950, when ownership transferred to a younger family member who changed the name to 4 Lazy F and opened the ranch to paying guests. The property remained an active dude ranch until the mid-1990s and has been under full Park Service ownership and management only since 2006.

Like most dude ranches in the area, the 4 Lazy F was both a working ranch and a dude ranch, with the structures that were part of the working ranch—corrals, caretaker’s cabin, and barn—kept separate from the residential part of the property. Enjoying extraordinary views of both the Tetons and the Snake River, 4 Lazy F must have been a special place to vacation. 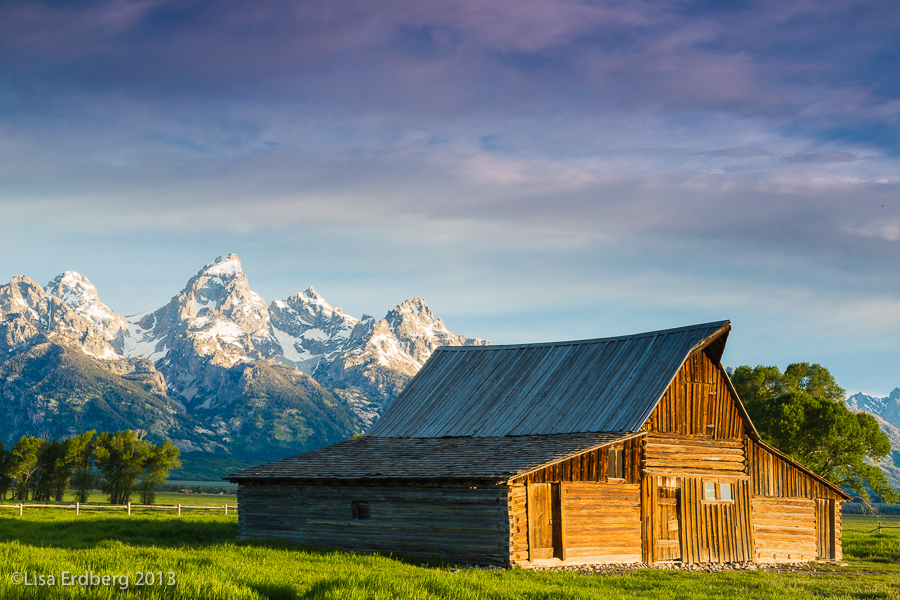 Speaking of the Moulton Barn, no mention of historic properties in Grand Teton National Park would be complete without including what is often described as the most photographed barn in America. A word to the wise: sunrise photography there is not for the faint of heart, as the hordes of photographers who gather there can be intimidating.

The Moulton Barn is located on Mormon Row, now the Mormon Row Historic District, which was settled by Mormons from the Salt Lake area in the 1890s. While most early settlers in Jackson Hole chose to stake their claims as far from their neighbors as possible, the 27 original settlers of Mormon Row clustered their homesteads in order to share resources. With its relatively sheltered location, this area was more conducive to agriculture than most areas in the valley. Enterprising settlers dug irrigation ditches, some of which can still be seen, grew crops, and raised chickens for their eggs, which were a valuable commodity and also used as currency.

T.A. Moulton homesteaded his property in 1908 and began construction on the barn in 1913. It took over 30 years to complete, with sections added as needed for particular purposes. The resulting gable-with-shed barn is a unique structure with great visual appeal. The T.A. Moulton Barn celebrated its centennial in 2013; thanks to recent restoration efforts funded jointly by the National Park Service and private donors through the Grand Teton National Park Foundation, the barn and other historic properties on Mormon Row will continue to delight visitors for another hundred years.

In an exciting development, the National Park Service and Grand Teton National Park Foundation have recently announced a strategy to preserve the Mormon Row Cabins, the last remaining privately-owned inholding in the Park’s Mormon Row Historic District, and ultimately to transfer the property to the park. Thanks to the generosity of an anonymous donor and the collaboration of the Park Service and the Foundation, this property, which could have otherwise been acquired by a private party and redeveloped with up to 10,000 square feet of new construction, will now be preserved and utilized in ways consistent with the park’s conservation purposes. 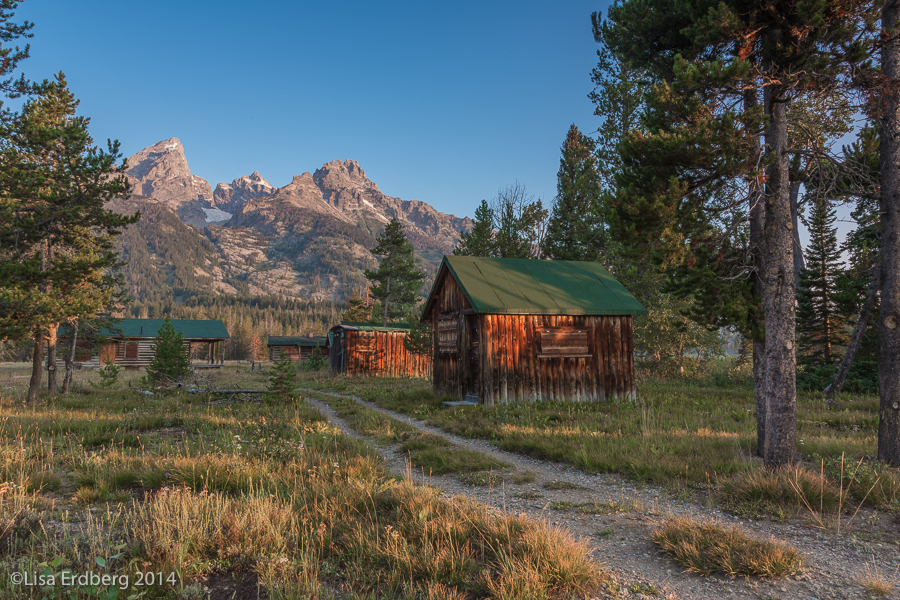 The Lucas-Fabian Cabins hold a special place in my heart, perhaps because this property was the first of these historic homesteads I discovered, perhaps because of the strong-willed, eccentric woman who settled the property and made it her solitary home from 1913 until her death in 1938. Geraldine Lucas was a woman way ahead of her time. After extricating herself from an early unhappy marriage, she returned to college as a single mother, graduating from Oberlin in 1898, and then went on to make a career as a music teacher in New York. When her son left home at 16 to join the Coast Guard, she followed her siblings to Jackson Hole and established her 160-acre homestead at the base of the Grand Teton.

After looking up at the peak for a decade, Geraldine decided she wanted to climb the Grand. In 1924, at the age of 58, she became the second woman to reach the summit. The cabin she built for herself looks out on the Tetons; she built another cabin for her son in the hope he would eventually join her there, but while he visited occasionally he never occupied the cabin. There are a number of out-buildings on the property, including one rarity among Jackson Hole homesteads—a garage, built in 1925 to house Geraldine’s 1924 Buick touring car. In the winter, she traveled by sled, pulled by a team of Malamutes, but in the summer the automobile was her preferred mode of transportion. Hers was one of the few automobiles in the area, and she must have cut quite a figure in it.

The covered porch of Geraldine Lucas’ cabin, with its commanding view of the mountains, is an ideal spot for a picnic lunch after a morning hike. Extensive preservation efforts have ensured the accessibility of this magical property for visitors, and the excellent descriptive plaques enhance the visitor’s enjoyment and appreciation of the Lucas-Fabian cabins.

These are but three of more than a dozen historic properties in Grand Teton National Park. In planning your visit, consider visiting some of these properties to add another dimension to your park experience. The rangers at the Visitor’s Center can provide you with directions and additional information.

In Search of San Francisco - Part I