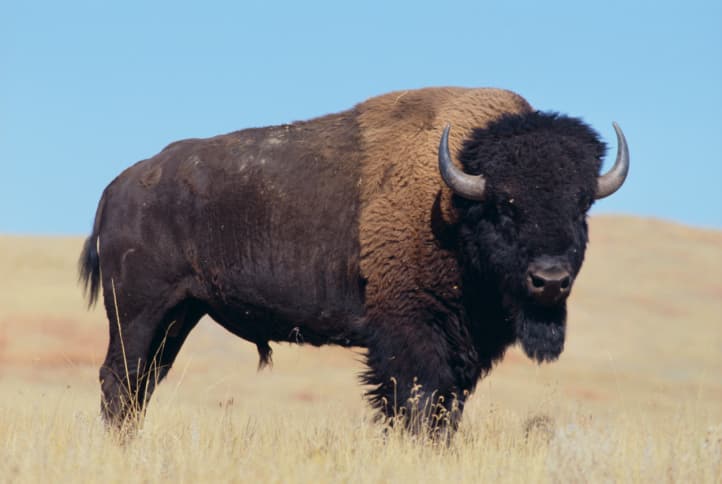 Biking Where the Buffalo Roam in Jackson Hole, Wyoming

If you’ve ever locked eyes with an American buffalo on an open range, you may have been reminded that this long hunted, ancient beast is an on-the-hoof demonstration of survival power. And if you’ve ever been close enough to appreciate the massive, sinewy strength of wild bison, you may also understand why the National Park Service prohibits visitors to Wyoming’s national parks from getting closer than 25 yards to them. 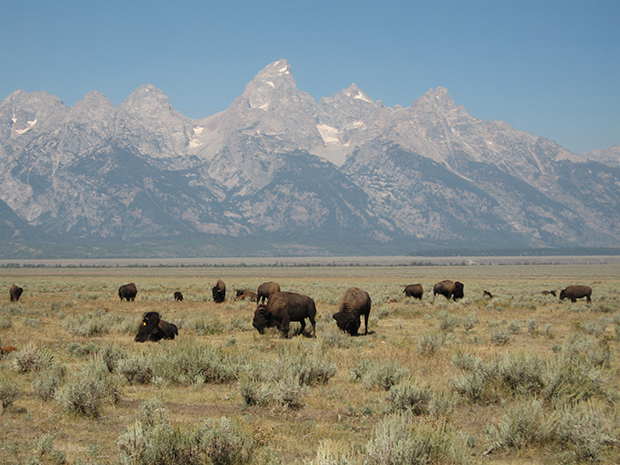 Even forewarned on a recent trip to Jackson Hole, Wyoming, I couldn’t resist the temptation to join a bike ride offering the possibility of an up close look at free roaming buffalo framed by the Grand Tetons.

Antelope Flats, a part of the Teton National Forest in the lowlands of the Snake River Valley, is about 12 miles north of the heart of Jackson, on Highway 89. The low traffic road dissecting these plains offers the scenery of an old western movie with the potential of close up encounters with free ranging wildlife such as buffalo, antelope and moose. 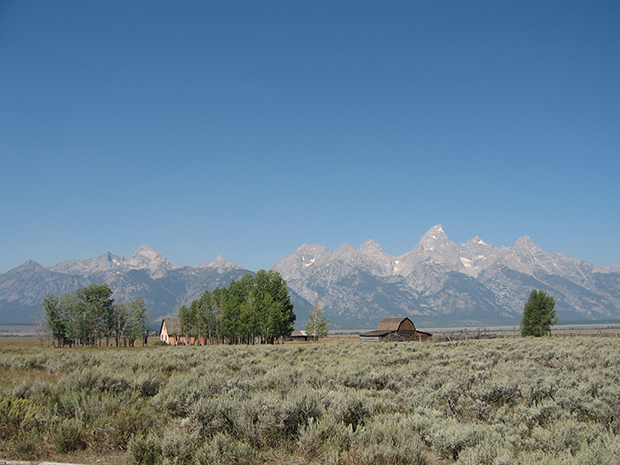 Jackson Hole offers cyclists many options, with both guided tours and equipment rental companies in town and nearer national parks. My group decided to go free wheeling ride and to rent bikes ourselves from Adventure Sports at Dornan’s in Moose, Wyoming. Not only is Dornan’s close to selected our trail, it’s enormous teepee also adds a fun, “wild west flavor” to a practical kickoff spot well equipped with stores and bathrooms. 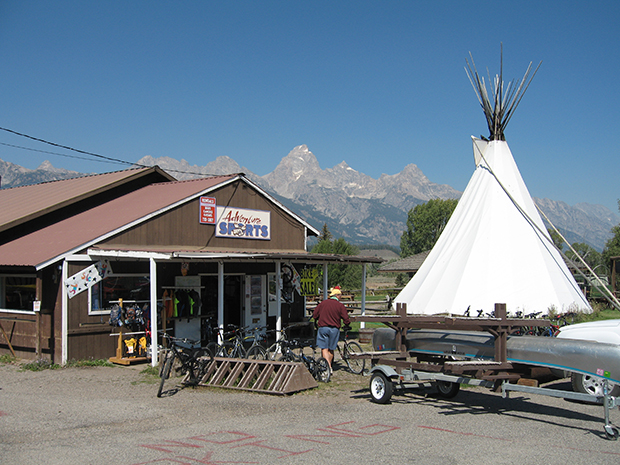 Properly fitted bikes loaded into our SUV, we drove to the edge of Antelope Flats to a spot near the Moulton Cabin, one of Jackson Hole’s most photographed and painted sites.
Seeing this old homestead framed by endless sky and magnificent mountains, I felt rewarded with an indelible memory of Wyoming’s natural grandeur and history, even before turning one pedal. 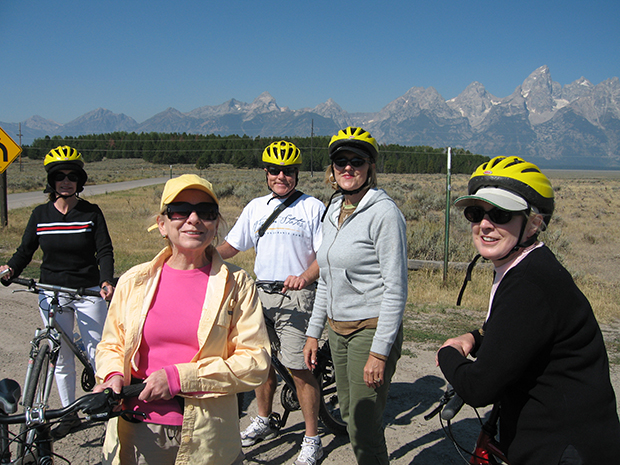 Starting our ride, we could already see brown shapes in the distance, possibly a bison herd. My hopes were lifted that I had picked a lucky day to cycle where the buffalo sometimes roam.

Pedaling less than a mile on road that seemed to offer a flat and easy ride, I was soon gasping in the cleanest air my lungs had inhaled in months. Obviously, the steady, 10 degree incline and thin air of the valley’s 6500 foot elevation delivered a good aerobic workout, even across this relatively flat grazing land. 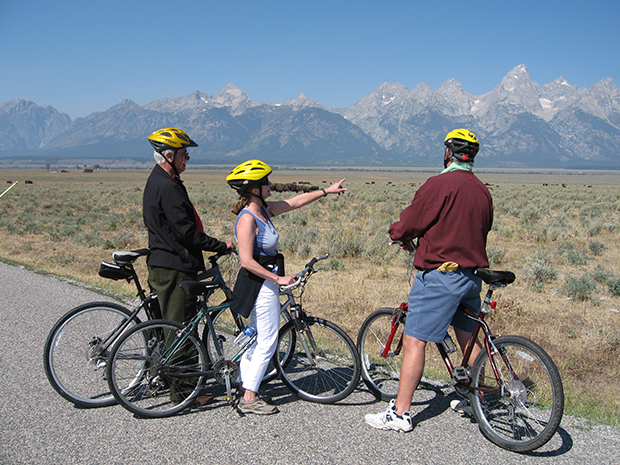 Riding about a mile toward the foothills brought us abreast of the 50-head bison herd I’d seen in the distance. We stopped to study a buffalo cow and calf. Seeing us, the mighty mother and offspring stared us down, making it clear that we were close to the edge of their grazing comfort zone.

Soon, one of the bulls ran to their side, stopped and glared with nostrils flaring. With a few dusty stomps, he punctuated a warning that it was time to mount our bikes and move along. 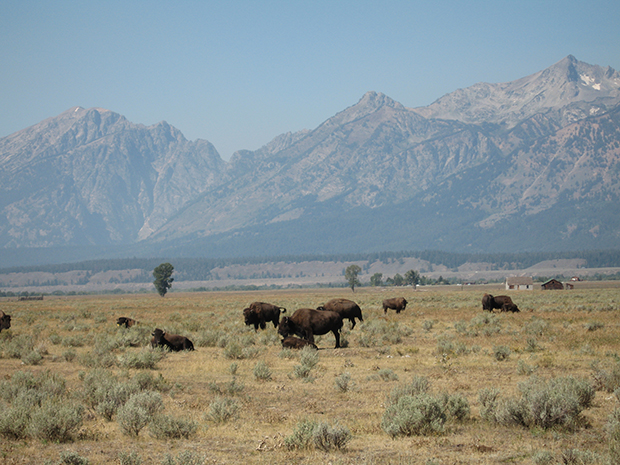 Riding leisurely was delightful, as we could observe frisky calves romping together, mammoth mothers tenderly nursing their young and a few intimidating bulls standing guard.

Our ride across Antelope Flats was shared with a handful of tourists in cars and several escorted biking tours whose guides stopped every half mile or so to narrate nature’s spectacular offerings. Even with the presence of a few other wildlife seekers, we were satisfied to feel that we were having an intimate visit with nature in the expansive valley. 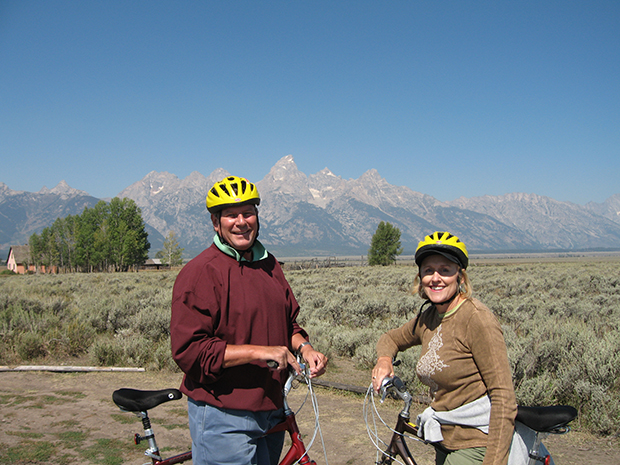 About three miles into the Antelope Flats, a fork in the road forced a choice of direction. One of my fellow riders had made this ride many times and explained our options – a longer ride to the south or an easier, more visually pleasing turn north.

More interested in scenery than sweat, we turned north toward Black Tail Butte where we rode several miles parallel to the Rockies through hospitable hills and colorful stands of slender aspen and cottonwoods.

Had we chosen the southern fork back towards Jackson, the ride would have taken us through Kelly, a small community of Kelly populated by locals, not tourists. Sounds like a reason to try this ride again.

Cynthia Pharr Lee is a Dallas, Texas-based communications executive and business writer who has extended into travel writing as she’s begun to travel the globe. In addition to Prime Women, her stories have been published in Club Corp Magazine. She may be reached at [email protected]

5 Habits That Help You Lose Fat