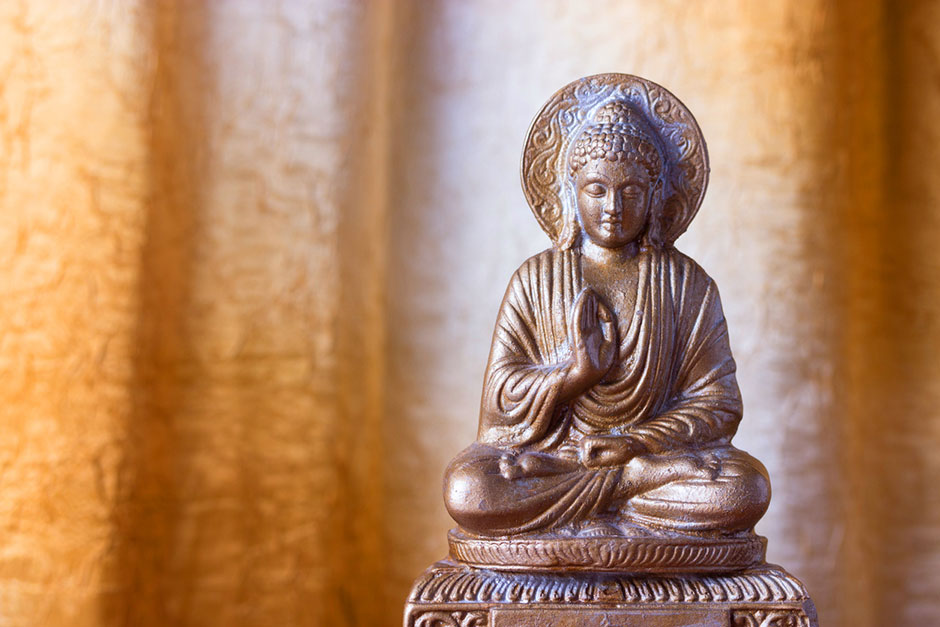 A Journey of Connection: Meeting the Dalai Lama

In October, I found myself in Dharamsala, India, with a group of thirty, waiting to meet the Dalai Lama outside of the gate to his residence. I hadn’t thought much about visiting India until I received an email from the Dallas Yoga Center about a trip that would include hearing the Dalai Lama speak and having an audience with the him. It took me about two minutes to decide to go.

For me, the Dalai Lama is like Mahatma Gandhi, Mother Theresa and Nelson Mandela as an icon of compassion and peace in the face of horrible cruelty and injustice. The Dalai Lama, the spiritual leader of Tibetan Buddhism, has lived in exile from Tibet, in Dharamsala, India since Tibet was invaded and decimated by the Chinese. He won the Nobel Peace Prize in 1989. 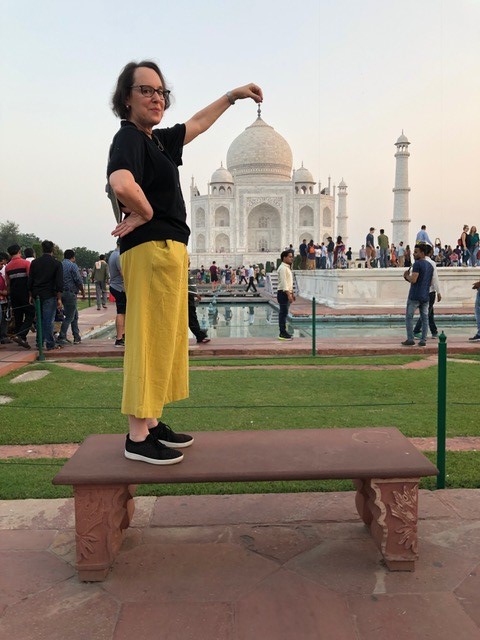 The Dalai Lama’s story is like a fairytale that became a nightmare. He is the 14th incarnation of the first Dalai Lama, the original spiritual leader of Tibetan Buddhism who lived in the 13th century. After the death of the 13th Dalai Lama in 1933, three search teams went out to find the 14th incarnation. Going in different directions the teams followed signs and visions to locate the boy who was the next incarnation.

Upon reaching a small house in the farming community of Taktser, a woman holding a two-year-old named Lhamo Thondup (which means “wish fulfilling goddess”) answered the door. When they showed the boy many toys and trinkets, he immediately picked out and held fast to a rosary belonging to the 13th Dalai Lama. He was selected as the 14th incarnation of the Dalai Lama in 1937 at the age of two, recognized publicly at the age of four and enthroned at the age of five. He assumed all political duties as leader of Tibet at age fifteen just after China annexed Tibet against the will of the Tibetans.

In 1959, the Tibetan people revolted and bloody battles with the Chinese ensued. On March 30th, fearing for his life, the Dalai Lama and, eventually, over 100,000 Tibetans left Tibet with the help of the CIA, crossing the Himalayas for 18 days and arriving in India on April 18. Since then over 1 million Tibetans have been killed by the Chinese. The Dalai Lama and his followers have made their home in Dharamsala, India, on the edge of the Himalayas. 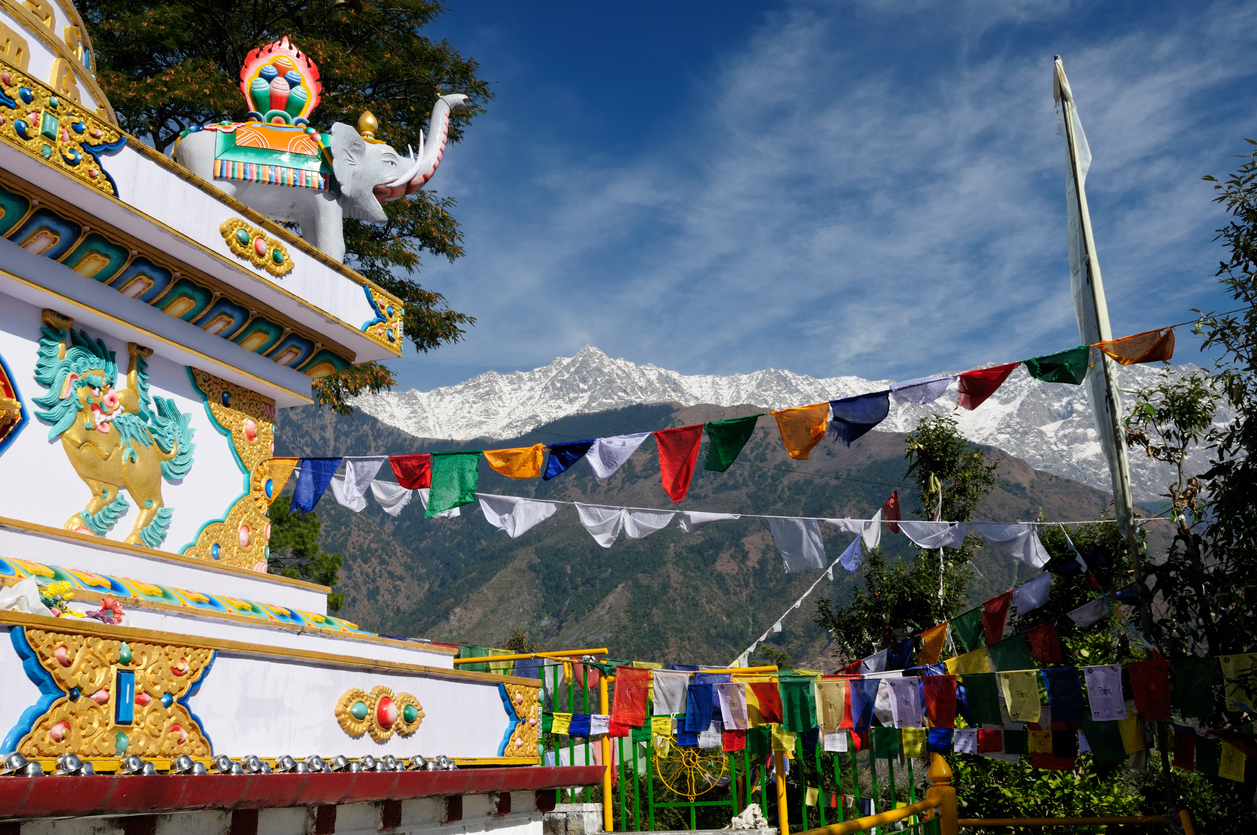 My group of 15 arrived in New Delhi on October 27th where we spent 6 days before starting our fourteen-hour car ride to Dharamsala. Driving over narrow, winding, pitted roads we frequently watched in terror as drivers sped past each other while motorbikes weaved in and out and the occasional cow stopped traffic. On our rest stops, I learned to use the toilets which were holes in the floor and also that I should always carry toilet paper.

Upon arriving in Dharamsala, we discovered our hotel reservations had been cancelled due to code violations and ended up at a variety of hotels, some of which had fist-sized spiders, dirty sheets and, in my case, a dripping toilet. We changed hotels 3 times in 7 nights, but that was just part of the rhythm of the trip – letting go of expectations, flowing with whatever came our way.

A wonderful aspect of the trip was getting to know the stalls, shops and colors of Dharamsala and finding our favorite cafes and restaurants for momos (dumplings). None of the items for sale in stores had price tags because all purchases were negotiated. The streets were filled with people, dogs, monks in red robes and the occasional cow all coexisting with honking horns and speeding motorbikes. 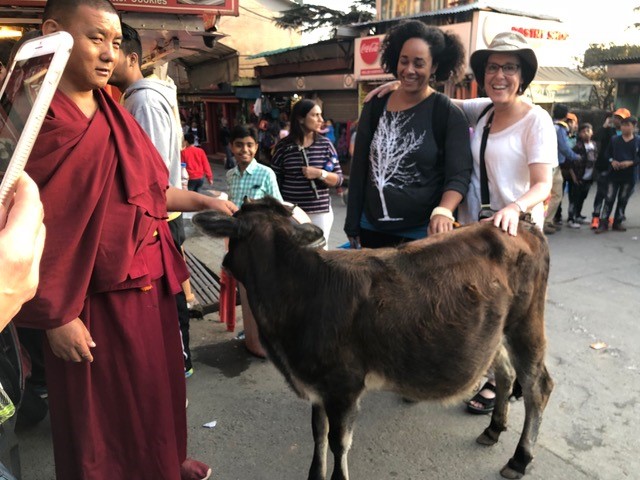 On our second day, we began four days of teachings from the Dalai Lama. I sat cross-legged on the floor for two and a half hours each day, listening to the Dalai Lama address about 2000 people from around the world with translation in eleven languages.

For four days, he spoke about the Buddhist doctrines of Emptiness and Dependent Origination. I can’t say for sure that I understood anything he said, but I can tell you what I thought I heard him say, which is probably what I needed to learn. What I heard is that everything is interconnected. The world is filled with forms that have names, including objects and people. While they appear distinct, they are really all connected.

We may call something a glass and see it as a distinct entity, but it exists because of the minerals in the ground that are eons old, the people who mined them, fired them, boxed them, shipped them, and the culture that determined that glasses are needed and then decided to call it “glass.” The name/identity/form which we think is so solid and separate from everything else is connected in an endless flow to everything else.

People are the way they are because of genetics, upbringing, the generations before them, their culture, their attempts to improve themselves, etc. Therefore, it doesn’t make sense to blame someone for being anything other than the way they are. And since most people are suffering to some degree, it is best to treat them with kindness and compassion. This may not even closely resemble what he meant, but it is what I heard.

The last part of the program was a special ceremony that included chanting, drums and gongs. I felt as though the spirit of the Divine was flowing through me. I knew this was why I had come. He concluded the four days by thanking us all for coming to listen and for allowing him to him share “what little I know.” What incredible humility! 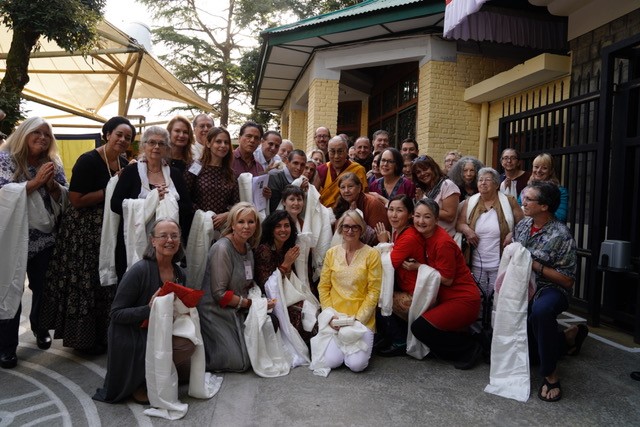 The next day, our group of 15 and another group of 15 with which we had joined had an audience with the Dalai Lama. We were told to be in front of the gate to his residence at 7:30 a.m. Upon arriving, we were asked to form a horseshoe so we would all be seen in a photo. Our guide, Choesang, asked the tall people to stand in the back. Being a shorter person, I stood in the front.

Immediately, Trude from Latvia, who is a head taller than me, stood in front of me. When I asked her if she would move she said, “I’m staying here. I’m already a follower of the Dalai Lama and tall people are always told to go to the back.” Mercifully, some women closer to the center of the horseshoe called me over.

When the Dalai Lama came through the gate he walked straight toward me and took my hands. I bowed my head in respect and reverence. Only a few of us had the good fortune to have him hold our hands. When the group picture was taken, he was next to me, shoulder to shoulder. It was a thrill and an honor. 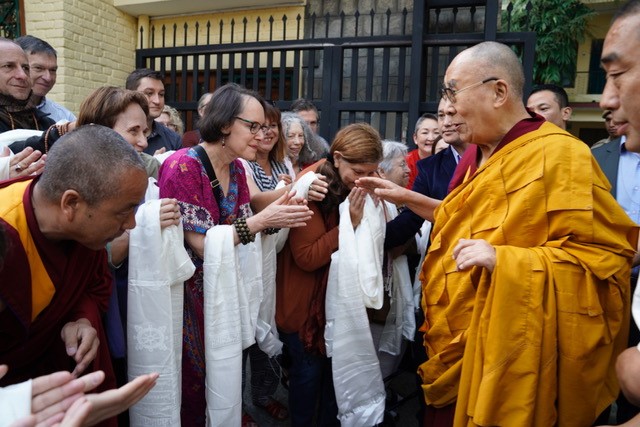 The experience of this trip is extremely difficult to convey. It was the most chaotic, uncomfortable, frustrating trip I’ve ever taken, as well as the most beautiful, satisfying and inspiring.